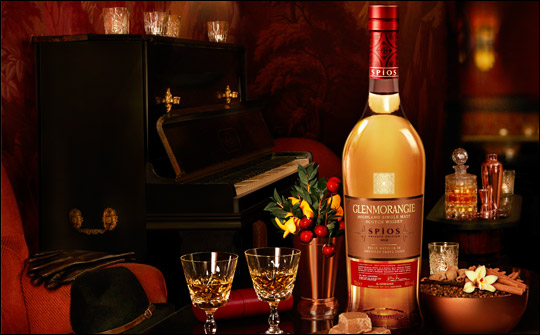 Glenmorangie Spìos, the Private Edition for 2018, exhibits a subtle spice inspired by American rye whiskey. With its savory and full-bodied character, Glenmorangie Spìos (Scots Gaelic for ‘spice’ and pronounced ‘spee-oss’) recalls the heyday of American rye when production levels of rye whiskey were at an all-time high, it was hugely popular and considered highly desirable. Indeed, classic cocktails such as the Manhattan, Old Fashioned and Sazerac all used rye as their base alcohol when they were first created, over time, the spirit fell from favor and slipped into obscurity, where it would remain for years to come.

When traveling in the US in the late 1990s, Glenmorangie’s director of Distilling, Whisky Creation & Whisky Stocks, Dr Bill Lumsden, sought out some of the few remaining rye distilleries, intrigued by the whiskey’s history. He found its characteristics of cinnamon and clove so captivating, that he decided to experiment with American ex-rye whiskey casks. Aware that a spirit of Glenmorangie’s renowned smoothness could invite rye’s subtleties to shine through in a way that many others would not, he was determined to one day bring a hint of American rye whiskey’s character to the Distillery’s renowned spirit.

To make Glenmorangie Spìos, Dr Bill sourced the finest first-fill casks from American whiskey’s heartland of Kentucky. Long before the rye resurgence of today began, he arranged for these hand-selected oak casks to be shipped across the world, to the Glenmorangie Distillery.

Dr Bill comments: “I have always loved American rye whiskey’s spicy character, and I believed our smooth house style would perfectly complement the nuances of ex-rye casks. The result is Glenmorangie Spìos – a full-bodied, savory single malt which brings to mind American rye whiskey’s golden age. Its fresh, herbal nose hints at cherry, clove and scents of green grass. The rye’s spice bursts on to the palate, as toffee, clove and cinnamon mingle with buttery  vanilla, before a sweet and lingering finish – a single malt whisky which is unmistakeably Glenmorangie, yet exquisitely different.”

Bottled at 92% Proof, and non-chill filtered, Glenmorangie Spìos is available from www.Clos19.com and specialist whiskey shops worldwide priced at $110.