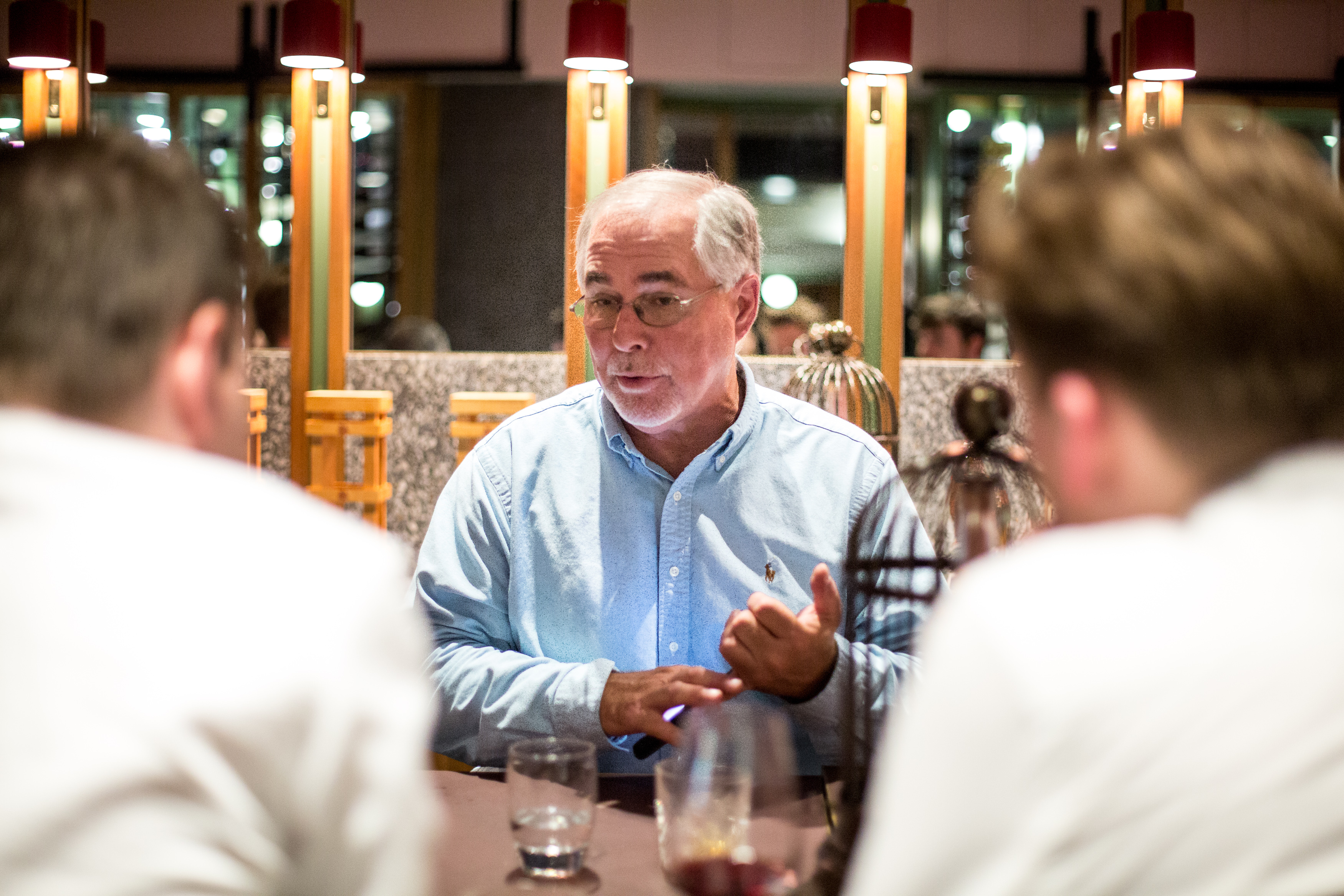 Wild Turkey is situated on a deep limestone shelf on the Kentucky River. When you visit you may find one half of the legendary father and son master distilling team of Jimmy and Eddie Russell, who have nearly 100 years of collective experience working at the distillery, in the visitor centre greeting fans.

The Wild Turkey brand name first came about back in 1940 when distillery executive Thomas McCarthey took a few warehouse samples on a wild turkey hunting trip with a group of friends. The following year, his friends asked him for “some of that wild turkey whiskey” and the brand was born.

When it comes to family and friends’ ties there are a lot of distilleries that claim father to son legacies, however at Wild Turkey in Kentucky we are seeing the third generation showing interest. What’s more a new family has joined the Russells’ rule of the Lawrenceburg distillery and looks set to inspire a whole new generation of Bourbon drinkers.

It is always a little risky taking on a ‘face’ or ‘name’ from show-business to promote your whiskey, but when they come as big as Matthew McConaughey, the collaboration is going to put you on the map.

According to master distiller Eddie Russell that’s what the partnership is. It is not a case of loose celebrity endorsement, McConaughey has become part of the family and work
force.

Eddie said that after a trip to the distillery several years ago, the brand approached the Hollywood star to see if he would be interested in working with them.

He added, “The reason he came basically was because his mother and father met at the University of Kentucky, which is only 20 miles away from us. So that sort of attracted him, because he likes Bourbon.

“After spending a day with me and my father and son, he saw how authentic it was, how family orientated it was, because he’s a huge family man, and he went back to them and said, “I don’t want to make commercials for you. I want to tell this story because I think people know Wild Turkey and I think they’ve heard of it, but I don’t think they understand,” and I don’t think anybody does until they come to our distillery and spend the time with us.”

In the following years it became clear that the two families were going to get along just fine, and McConaughey has been ingrained in the Wild Turkey brand as creative director for several years now.

Eddie continued, “He’s very down-to-earth, he’s a very family tied guy, he’s very heartsy. I really like what he stands for. I think he appeals to women and men. So I think it works really good. I think he can speak to young people and old people, so it’s a good fit for us.”
Speaking of his own family, Eddie is proud that his son looks set to follow in his and his grandfather’s footsteps, “He has been a brand ambassador for us for a few years now, and he is set on the road to be the next master distiller.”

The changes certainly seem to be future proofing Wild Turkey. The brand has prided itself on sticking to one recipe since its inception.

It is distilled and put into new oak barrels at a much lower proof than most Bourbons. This results in a much richer flavor, as less is cooked out during the production process. Aging in the highest quality new American oak barrels with the heaviest char available (the Number 4 “alligator” char), imparts a smooth flavor and deep amber color to the whiskey.

One of its latest whiskeys, Master’s Keep, represents a slight departure from tradition for the Russells in terms of how they like their whiskey to mature.

Eddie explained, “Back in 1993 Wild Turkey was growing and I ran out of warehouse space so we built a warehouse and it was the first warehouse that had been built in Kentucky in more than 25 years. Then in 1996 I had that warehouse full. We didn’t want to build another one so we rented some. The only ones I could find to rent were two big brick warehouses where Old Crow and Old Taylor was made. Of course, my father didn’t want to do it because we had never aged in brick warehouses and stone warehouses.”

The barrels were checked every six months or so and Eddie noticed that the whiskey did taste different. He recalls the whiskey he sampled from this site was milder and lower in proof. Eddie believes this was due to the brick walls and floors causing a lack of circulation and the inside not being as hot in the summer as their metal warehouses.
He added, “If you look at my warehouses in July and August, my top floors could be over 100 degrees. Your whiskey works so deep into that wood you are getting a lot more of those tannins, you are getting a lot more of the oaky spicy notes. On the middle floors work for about 85-45 degrees and that is perfect to get that whiskey in that wood and get it out when it gets cold. This brings out the more of the vanillas, fruits and nuts and things. Now the bottom floors, when I first went there we didn’t even use the bottom floor of our warehouse ‘cos my dad doesn’t like that earthy, floral tone. That’s why he doesn’t like rye as well.”

However, for a man who doesn’t like rye he certainly has been making it long enough, again to a single mashbill he started with, and now the world is taking notice.

Eddie added, “My dad’s made rye since 1954 but he doesn’t like to drink it at all. I mean nobody drank rye for 40 years and all of a sudden everybody wants to drink it. It’s the same thing that’s growing our industry because the bartenders came in, they changed everything for us. I grew up with friends and we’d sit around and say our only concern was 50 and older males…and “What’s going happen when they are gone?” Nobody is getting into our industry.

The bartender community changed that completely, I mean, now it caused the habit of people drinking whiskey, the 21 to 40 year old males and females.

“You know it’s wonderful to see and it’s not really something we did, it’s something that the bartender community did by going back and making the classics, the Old Fashioneds and the Manhattan’s.”

For a brand that is handing it’s legacy from father to son, and the backing of a big name that truly believes in the spirit and ethos of the company, Wild Turkey looks set to face the future in great shape.

0 comments on “Taking on the future”