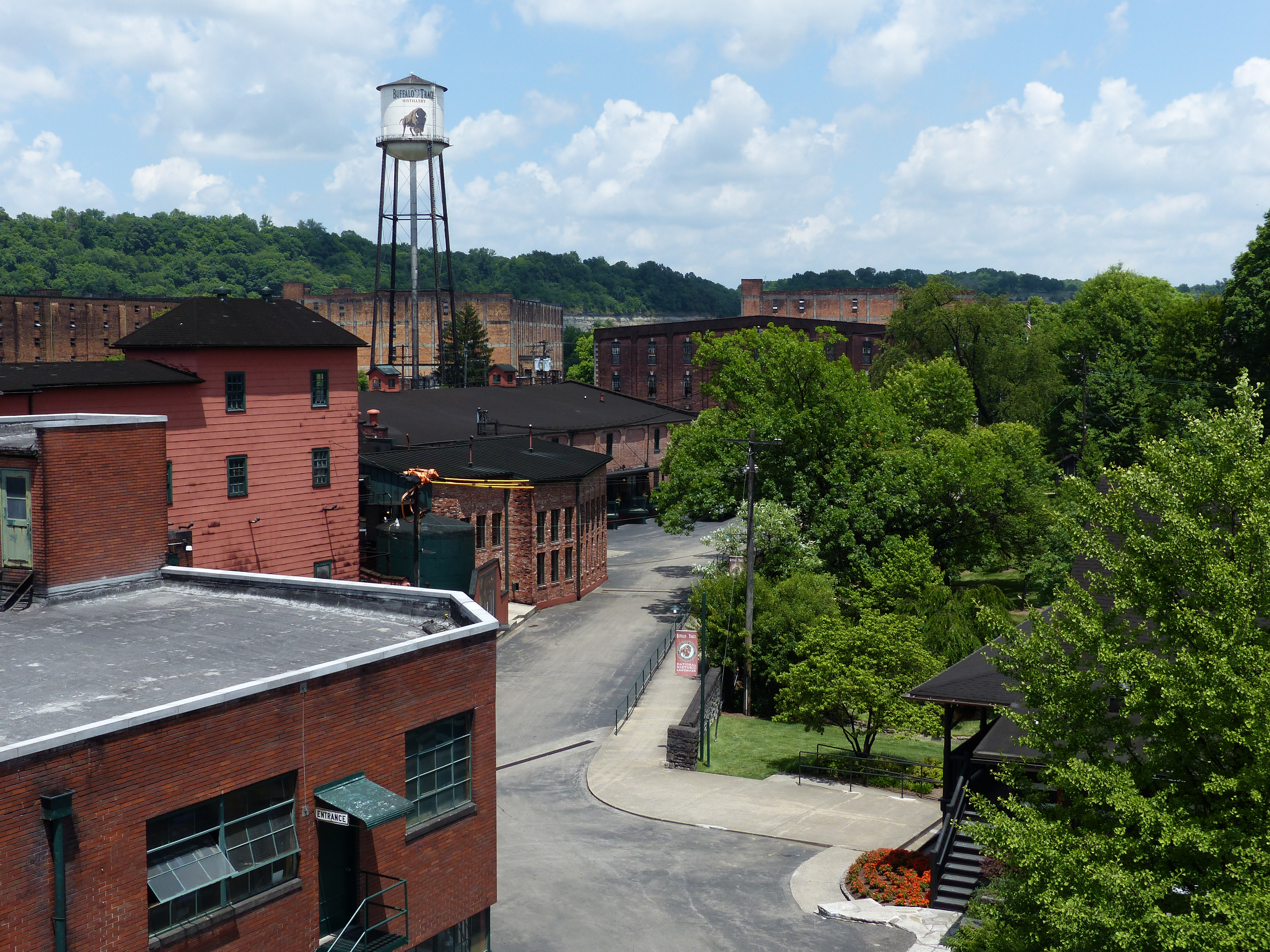 What do a Kentucky Bourbon distillery built in 1857 and a Roman city from the 7th Century A.D. have in common? An interesting enigma, untangled by the Whisky Couple during their recent visit to Buffalo Trace Distillery

In the year 79 AD the city of Pompeii was covered under showers of ash, after the Vesuvius volcano viciously erupted and created an immense human disaster. It took until well into the 16th Century before remnants of this once mighty city would be uncovered. Since the 18th Century, archaeological research has been continuously conducted. A large portion, but not everything by far, of a once prosperous city in the Italian province of Naples has been uncovered. The ruins are listed on UNESCO’s World Heritage List.

“What on earth does that have to do with a Bourbon distillery?” We questioned our tour guide Shelly, who gave us an exclusive peek in the underbelly of the distillery. Literally, since she took us to a site excavated under the floor of a former storage building at Buffalo Trace in Frankfort, Kentucky, which, to quote our guide, ‘Compared to Pompeii, has only been on the list of National Historic Landmarks since 2013.’ Okay, no UNESCO, but still. After all, the USA isn’t even 250 years old yet.

Here’s some Bourbon history. Around 1857, in Leestown, also spelled Lee’s Town, a distillery was built at a location that used to be, according to local lore, a ford where bison crossed the Kentucky River. In 1870 buildings and grounds were purchased by Mr E. H. Taylor Jr, a respected whiskey broker who had the army as one of his important customers. Although not a military man, he was allowed to style himself with the title (Kentucky) Colonel. He christened his distillery OFC, an abbreviation for Old Fire Copper (or Old Fashioned Copper), the name referring to the copper stills and equipment he used. In one of the oldest buildings on the site these initials can still be seen, carved in a keystone.

Taylor was a man with a vision and an eye for quality. He was among the pioneers of steam distillation and his OFC Bourbon was so well appreciated that other distilleries added the name to their own products, a practice comparable with that of certain Scottish distillers who used the quality affix ‘Glenlivet’ at the end of the 19th and beginning of the 20th Century. In both instances a court case ended the custom.

Around 1880 Taylor built a second distillery next to the first one and called it Carlisle. Both distilleries worked in tandem and were considered the largest and most modern in the world at that time. Shortly thereafter Col. Taylor sold lock, stock and barrel to his colleague George T. Stagg, who suffered a bad start. In 1882, as at Pompeii centuries before, a natural disaster took place: this time in the form of a lightening strike, causing the entire OFC Distillery to burn to the ground. Contrary to the disaster befallen on the ancient Roman city, whose ruins would go unnoticed to the general public for many centuries, Stagg resurrected his newly acquired distillery immediately, covering what was left of the old buildings. A picture taken around 1896, probably the first ever taken of the complex, shows the vastness of the operation. In 1904 OFC was re-baptised as George T. Stagg Distillery.

As one of a handful, the distillery managed to survive Prohibition (which came into effect on 19 January 1920) by acquiring a license to produce, distribute and sell whiskey for medicinal purposes. In 1929 the Schenley Corporation bought the company.

The new owner would be instrumental in the resurrection of the American whiskey industry after Prohibition was repealed on 5 December 1933.

Natural disasters seemed to haunt the distillery and in 1937, during the Great Flood when the Kentucky River stretched far beyond its natural borders, the consequences were enormous. The boiler room, heart of operations, was flooded six meters and the water reached above the second floor of Warehouse H, the one furthest removed from the river. Col. Albert Blanton, whose name would be used to launch the first single barrel Bourbon decades later, managed the distillery at the time. According to legend, it took him 24 hours to get things running again.

In 1958 Schenley reorganized the entire plant and poured concrete over the oldest part of the original OFC Distillery, the location of Col. E.H. Taylor’s old copper lined fermentation tanks, and hid another unique part of America’s distilling history. Schenley would be taken over a decade later and consequently dissolved into Guinness in 1987, which Irish beer had long been imported by Schenley into the USA.

The distillery complex that had survived various natural and human disasters (such as Prohibition) only acquired its current name Buffalo Trace Distillery in 1992, given by its new owner the Sazerac Company, which still owns the business. From then on the distillery would gradually be expanded and production capacity enlarged.

Such actions are often accompanied by the tearing down or renovation of older buildings. In 2012 a group of construction workers digging into the floor of an old storage building, with an eye to reinforcing its riverside wall, encountered old brick pillars and temporarily stopped their work. A Bourbon archaeologist by the name of Nicolas Laracuente was flown in. This expert is known for having found remnants of old distilleries that had not survived Prohibition and soon headed the excavations. A unique part of the old OFC Distillery was found, dating from before the great fire of 1882. The oldest part goes back to 1869 and complete walls from 1873 and fermentation tanks from 1882 have been found. The actual situation was matched with old lithographic images from those times and the comparisons are remarkable, which we could later validate in the beautiful visitor centre.

Sazerac’s marketing department saw a unique opportunity and decided to create a new tourist attraction. Bourbon Pompeii was born and officially opened on 25 August 2017. Daily, only 15 people are allowed to visit the ruins and interest has been overwhelming. If you wish, you can follow a kind of catwalk and ogle a unique piece of distilling history in the USA that was hidden to the eye for more than a century. Not as long as Pompeii, not on such a grand scale and with less human drama involved, but a certain comparison may be made, if only for the guild of archaeologists and the hard-core Bourbon aficionados.

Long time master distiller Elmer T. Lee is considered the father of single barrel Bourbon, the American equivalent of single cask malt whisky from Scotland. Buffalo Trace honored him by launching a Bourbon with his name.

Factually, the animal that is depicted on Buffalo Trace Bourbon Whiskey is a bison. There are no native buffalos in the USA.

The yeast strain originated in 1932 and is being propagated by a Belgian company that exports their product to Kentucky company Red Star, who supplies Buffalo Trace. The old tanks that used to keep the yeast alive at the distillery are now used for experiments conducted by master distiller Harlen Wheatley.

Buffalo Trace is located at a site where whiskey has been distilled with a license since the mid-19th Century, which, legally, makes the company, in its different guises over time, the longest whiskey producing distillery in the USA.

Buffalo Trace uses three mash bills, from which 18 different Bourbons and rye whiskeys are being made, with brand names such as Blanton’s, Buffalo Trace, Eagle Rare, George T. Stagg and Col. Taylor.

Buffalo Trace supplies Julian P. Van Winkle III with Bourbon for his famous Pappy van Winkle bottlings, ever since its old, original stocks from Stitzel Weller were depleted, as Julian told us when we were jointly conducting a Bourbon tasting in Charleston, S.C. some years ago, during the annual Food & Wine Festival.

On 31 August 2016 Buffalo Trace welcomed its 1,000,000th visitor since it opened the grounds for tours in 1999. That’s a lot, but the figure dwarfs compared to the visitors at Pompeii. In the last decade the number of people who visited the ancient Roman site has grown from 1.5 million to 2.5 million. Annually, that is!