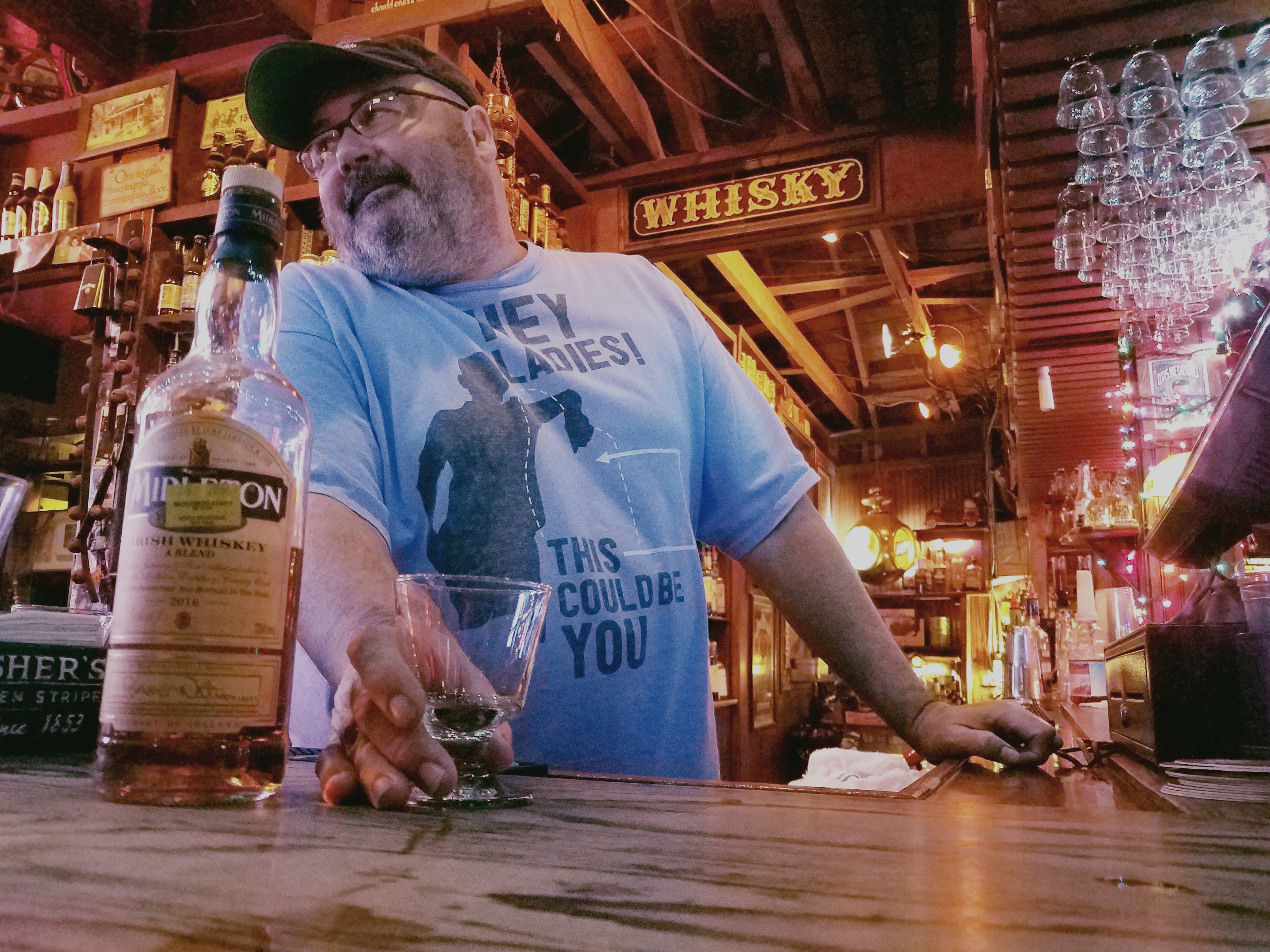 Of all the Gin joints… Not quite hunting for gin, we sent our man to find the best watering holes in town

Add the most romantic love triangle of all time, played by Ingrid Bergman, Paul Henreid and Humphrey Bogart, a story packed with intrigues, passions and cunning, here’s a classic movie for all time. But that was then, now back to Charlotte.

Hardly a patch on Rick’s chic Casablanca joint, Smokey Joe’s Café in Charlotte does boast a nostalgic, eccentrically kitschy atmosphere where whiskeys are reasonably priced, even if only main brand choice. Scottish, Irish, American and Japanese drams on the list, vie against their fabulous selections of international beers.

Despite the dim yet inviting lighting, bartender Mike nods a whimsical not-you-again greeting as I walk in; you know they remember you when there’s a Jameson already poured, no ice, before you reach the bar… I like that.

Like Rick’s Café live music is on tap most nights, rock & roll, blues and country played by incredible local bands, belting out old favorites mixed with their own compositions, and yet to find fame.

A funky place, crammed with jovial locals who, too, remember you – even if it’s been a year since your last visit.

The name Café is a lie; Smokey Joe’s don’t serve food. But they have no objection if you bring your own or order take-out from eateries nearby. (On certain holiday weekends free BBQ burgers and hot dogs are on tap at the outdoor grill, tips appreciated.)

“This is my man cave. Cool bar with a nice deck outside, sandy beach area with outdoor ping pong. A great place to watch a band and chill. There’s usually someone grilling or smoking something to eat outside. You can also order pizza and eat it inside,” a local patron told me.

Dogs, too, are welcome, a rarity in America. I bring Sasha, our easy-going if aloof Chow who sits at my feet so peacefully folks call her “The Living Rug”. I prefer sociably behaved dogs in bars, makes for additional relaxation where running-amok children have the opposite effect.

Meet the Wilson brothers, Mark and Brian, who, apart from their beards, are two city lads pitted against high dollar suits with political connections and deep pockets; types whose appetite for “Gentrification” have run off many of Charlotte’s iconic bars and hangouts.

Here’s Charlotte’s own version of the house from Up, the Pixar movie about a curmudgeon who refuses to sell his house to developers. Unlike the main character from Up, the Thirsty Beaver’s owners have no plans to float their bar away with balloons or be driven out of town.

I’m told as construction began, the owners of adjacent land erected a chain link fence hemming in the Beaver’s minuscule 0.1 acre saloon, much to the outrage of patrons who responded by attaching signs saying “Thank you for your support!” Despite such blatant intimidation the Beaver stayed open. “They were not going to push us around or force us out,” Mark Wilson proclaimed.

Still under construction at press time, those new apartment buildings haven’t caused too much disruption. Parking has gone however, but motorcycles can still park out front, neighborhood regulars walk and visitors park in one of the nearby public lots, with the Beaver hemmed in by five-story buildings, leaving but eight feet of easement on three sides

Wilson wasn’t trying to halt the plethora of construction in the surrounding area, but he was also not about to move out of the way.

“The neighborhood keeps changing,” Wilson told a local paper. “I get the change. We’re not trying to stop the change. I just think there’s ways to build and still keep the community together. A lot of things are going away that attracted people to the area, which happens in every city. But we feel honored that we’re able to stay. There are not a lot of times that happens.”

While Beaver dispenses more beer and wine than spirits, and regulars are really into country and western music, they do have whiskey…all drinks, however, are served in plastic glasses. I thought to raise hell with Wilson over that, but what’s a plastic cup compared to a chain link fence? The Wilson’s have enough to contend with.

“A pint of plain is your only man.”

The pub’s name comes from an O’Brien poem including the above observation, and a friendlier Irish bar is hard to find outside the Emerald Isle.

A 4,000-square-foot space with outside patio and peat burning fireplace, the joint has all the atmosphere of genuine articles I know well in Dublin, Dingle, Donegal and Derry, whose Bogside Inn comes to mind.

Over a generous free-pour of Bushmill’s 10 Years Old we’re tongue in cheek in banter, Scotland v Ireland, with Irish bartenders, swapping verbal slingshots alien to wide-eyed Yanks, until they realize it’s all in fun.

Twenty years ago there were few decent pubs in Charlotte. Then Ri Ra, the Irish Pub, set up shop in the shadow of towering bank buildings, genesis of what in years since have taken over the city’s bar scene thanks mainly to the entrepreneurial foresight of mostly Irishmen who came, saw and conquered.

Kevin Devin, an affable Galway man himself, I met at Connolly’s on Fifth; a fab Irish Pub where the U2 Tribute band played to sell-out St. Patrick’s Day crowds and the whiskey and the Guinness sold so well, staff spent three days counting the takings.

The savoring of a pre-dining dram increases the appetite hence bar-seated drinks were soon joined by hearty fish and chips served with peas, my favorite. Add goodly conversation, easy going staff. In short what local pubs should be.

“Every neighborhood deserves an Irish pub” says the bartender reaching for a brace of glasses. A golden glint of Bushmills malt, takes five seconds to grace my glass. “We love older buildings with character, this space is perfect for what we’re doing.”

To be sure, a grand place to share a dram indeed. Then there’s the food.

Here’s looking at you, Charlotte…