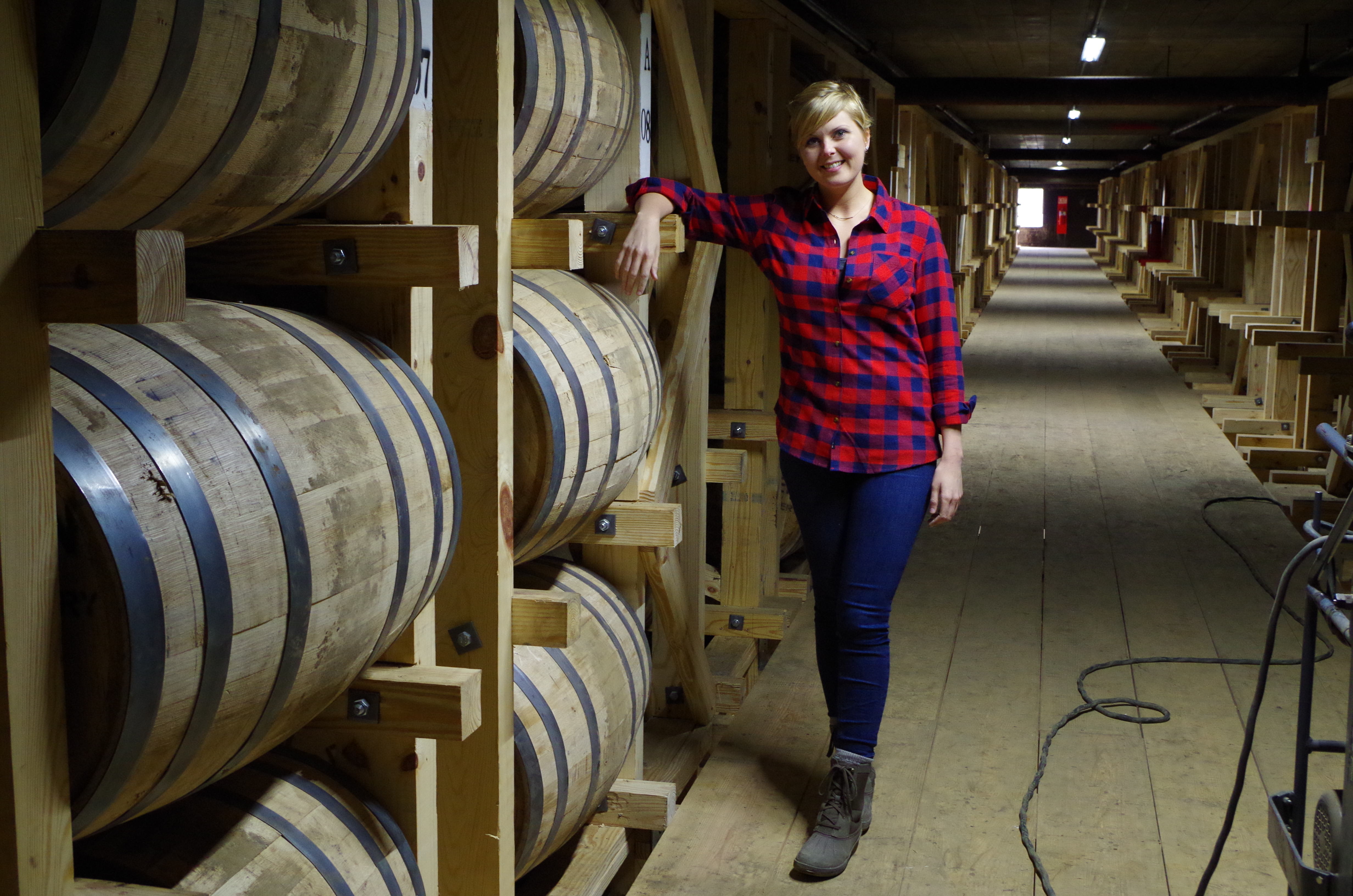 We meet the woman behind a distilling renaissance

When Marianne Eaves (Barnes) was attending the University of Louisville to earn a degree in Chemical Engineering her mind was on biofuels and green energy. The thought of becoming the first female master distiller in Kentucky since Prohibition never crossed her mind. At a career fair she learned about an internship at Brown-Forman and ended up working all over the world, from a tequila plant in Mexico to Jack Daniel’s in Tennessee, learning the ins and outs of distillation and the spirits business for one of the largest and oldest spirits companies in Kentucky. Then, when she was master taster and second in line to become the master distiller of Woodford Reserve behind Chris Morris, she was approached by Will Arvin and Wes Murry. The duo had purchased a dilapidated limestone castle and surrounding grounds down the road known as The Old Taylor Distillery and they planned to bring it back to life with Eaves at the helm.

At first when she heard from Arvin and Murry she was dismissive. She already had a pretty great career path in front of her. Eventually she gave in and agreed to meet with them among the distillery’s ruins and she fell in love with the place. In 2015 she joined the duo both as partner and as master distiller as the work began to clear away decades of decay and neglect from the once beautiful showplace of a distillery. Ultimately, she says, she saw it as an opportunity both to learn and to bet on herself and her own abilities.

“This is a hands on and involved process as a master distiller, getting the distillery up and running,” Eaves asserts. “I’ve had my hands in every aspect of production despite the fact I wasn’t doing any distilling for the first year and nine months.”

When they first began the process of restoration they thought they could get the place up an running in six months to a year since most of the equipment was still in place and could be made operational. After about three months they realized it was going to take a lot longer. Now three years later they are in full production and expanding proof gallon capacity to a little more than double what they started distilling with a year and a half ago, but construction is far from complete.

Early on they discovered the infrastructure needed to run a modern distillery just wasn’t there. The old plant had drawn millions of gallons of water from the creek and ran on coal.

Upgrades to the surrounding water system revealed an existing clay pipe system prone to water main breaks, so preparing distillery workers on what to do when that happens is crucial. They also had to run a natural gas line two miles to get service that far out of town.

“I don’t recall a time where I was like I’m done with this, but there have been frustrations,” says Eaves. When they made the decision to work with the equipment that was already in place, she explains, they unwittingly decided on doing things the old way, not fully realizing at the time that some of the advances in distilling had been made for very specific reasons. “We had the opportunity to learn from these challenges,” she says, recalling leaving an old rake agitator in place instead of upgrading to the more modern center mounted impeller they would eventually replace it with. “If we had upgraded from the get-go we could have designed things better.” The goal these days is to bring the distillery back to life in a much more modern way.

This first major release of spirits is called the “Restoration Release” and is named for the hard work and dedication it took to get the historic site with its limestone castle distillery back up and running. “There’s not a quick decision to be made because we have such high standards for ourselves and for our products,” Eaves says. The process of branding and packaging was the biggest factor holding up the release of Castle & Key’s gin and vodkas, but most importantly the team wanted to be sure that their products represented them well. They only bottled between 400-500 cases of each and currently they are selling in select areas of Kentucky and Tennessee only. What’s more, Eaves is banking that bartenders and on-premise accounts will be willing to give her feedback on the products so that future products can be adjusted to consumer taste if necessary.

But at the end of the day Castle & Key is all about the whiskey. “All of our followers are Bourbon and whiskey connoisseurs,” says Eaves. Their first runs of Bourbon and rye are approaching 18 months old, and when Eaves is asked when they plan to make that first aged spirits release she quips, “Whenever they are ready!”

The majority of the grains used for the distillery’s products come from one farm in Kentucky currently. The corn used for Castle & Key’s Bourbon is a non-GMO heirloom varietal called “White King,” a notable departure from the yellow corn that is industry standard for most Kentucky Bourbons. There are currently three mash bills from which everything is made.

Output is roughly 60 barrels a day, and already ricking is going into the second warehouse on the site to make room for the spirits. There’s still a lot of work to be done at Castle & Key, and Eaves is right in the center of all of it as both master distiller in charge of production as well as the public face of the brand. “I feel so fortunate that people are so interested in what we are doing.”