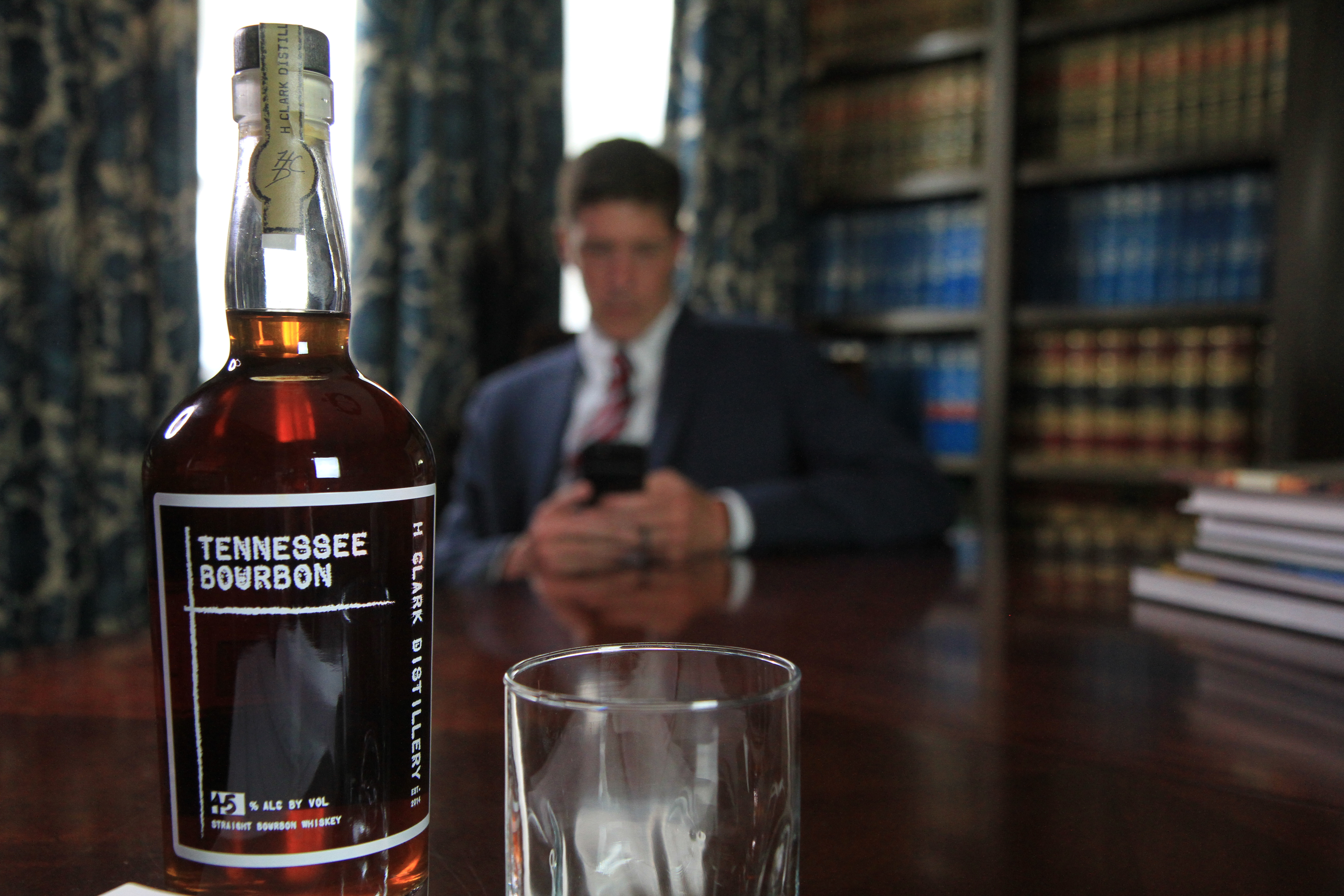 The story of an intrepid lawyer who ended Tennessee temperance

Of all the fraternities, associations, clubs and professions sharing kindred spirits, those into the joys of flying aeroplanes, motorcyclists, distillers too, certainly get the most enjoyment out of life. Did I mention lawyers? Despite Shakespeare’s jaundiced eye on the ancient profession, I’m gleefully clinking Glencairns with Heath Clark Esq., the intrepid attorney who shot down Tennessee’s prohibitive liquor laws.

You need to shut up and go do it!

“Those nine words changed my life” Heath grins, pouring a dark whiskey of his own making “I grew up on a beef farm outside of Tullahoma, smack in the heart of Tennessee Whiskey country. Having family members working at Jack Daniels, I was fortunate in getting to visit often. Early on I fell in love with the aromas of mash, processing procedures, of course their whiskey – which led my concerns over prohibition-like laws preventing the distilling of whiskey.

“I droned on about it to the point that my then boss, exasperatedly listening, swung his chair around commanding ‘You need to shut up and go do it!’’

“In 2008 I was a lawyer for a hospital company near Nashville when the inspiration to start a distillery struck me as a calling. Problem, it was illegal to make whiskey in 92 of Tennessee’s 95 counties! To “go legal” meant you required county-wide voter referendums to allow distilling. (Package store and by-the-drink sales also required separate referendums). Prohibition in Tennessee lasted nearly 30 years, shuttering hundreds of distilleries, due to its statutory hangover, Tennessee hosted only three distilleries as late as 2009.

“Without the resources or patience to go through a referendum and unable to move back home without hurting my legal practice in healthcare M&A, the path of least resistance was legislative. Betting people who liked to drink whiskey wouldn’t mind if someone made it, I sketched out the draft of a bill that would waive the referendum requirement for distilling in ‘wet’ counties (i.e. those already ok with retail sales).

“This idea would allow distilling in all but 71 of Tennessee’s 95 counties (24 of them still being dry at the time, we’re down to 14 today).

“While I had taken a class in law school called ‘Legislation’, I hadn’t drafted real or academic legislation since then. Nor had I lobbied anyone, except my boss petitioning for an additional vacation time. Really I had no idea how to bring my proposition to reality.”

Politics and all that…

“Meeting with a lobbyist friend, I quickly realized I couldn’t afford that sort of help, his offer contingent on $30,000 a year for three years, with absolutely no guarantees! Instead I talked to my dentist, who was active in local politics. By coincidence another patient was State Senator Bill Ketron, he’d already done more to move Tennessee’s spirits laws into the modern era than anyone else, liked my ideas which, following much behind- the-scenes negotiating, finally became Senate Bill 1955.”

Signed into law four months later in February of 2009, its future was far from certain, passing by only one vote in the state Senate! Even then it took further lobbying and enthusiastic pushing from a coalition of entrepreneurs, including Corsair’s Derek Bell, and Tennessee Distilling Group’s Mike Williams who proved critically important.

“Tennessee’s legislative process has been compared to sausage making, which understates the real life chaos in getting bills passed, where, believe it or not, some politicians will occasionally tell you something other than the truth!

“I met with one legislator who, despite assurances of support, voiced the main opponent of the bill.  I was stunned as he took to the floor of the House during the first hearing, ranting against it, coming close to stopping its passage there and then!

“This legislator’s duplicitous opposition spoke more of his venom against the bill’s house sponsor, than the bill itself, smacking of petty partisanship. Someone bought this (now former) Representative a drink after his speech!”

Refilling our glasses, we saunter nearer a copper still in the mash room; find a new perch as Heath continues. “That being said, being less than 100 per cent truthful occasionally does serve a purpose, and sometimes providing entertainment, such was my favorite floor speech which found me voicing feigned opposition to my own bill. This was when a known indulger of the famous Lynchburg elixir took to the floor to rail against the evils of alcohol, the doom this bill would spell for all of Tennessee, as if he’d never had a drop cross his lips.

Even eternally pouting lipped Temperance Leaguers themselves couldn’t have written a more impassioned condemnation on the evils of Tennessee’ native craft.

“I admit, I too, was less than truthful. During the long drawn out process I was compelled to feign more interest than I actually possessed, pretending enthusiasm while poring over scrolls of plans outlining the paving of some rural Tennessee road, the funding of which was secured by one particular individual whose vote we really wanted – but didn’t get.”

Know when to fold them

“Also,” Heath points out, “you better know when to take no for an answer, especially a quiet no!

“I witnessed one unnamed ally of the motion refuse to take no for an answer, and almost unwound the whole ball of yarn in the process.

“One of the greatest privileges I’ve had in the course of this extraordinary saga was attending the historic signing ceremony for Bill 1955; trepidation was high as we waited anxiously inside the august Supreme Court chambers at the Tennessee capital for Governor Phil Bredeson’s signature.”

Heath continues, “In retrospect I was struck at how hard work, a lot of luck and the power of ideas and people really can make a difference – that, and how much talking it took for me to shut up and go make whiskey!”

Another pour, another sip to Tennessee’s Bill 1955… Ah, the joys of making whiskey!

0 comments on “Dreams, drams and deceit”