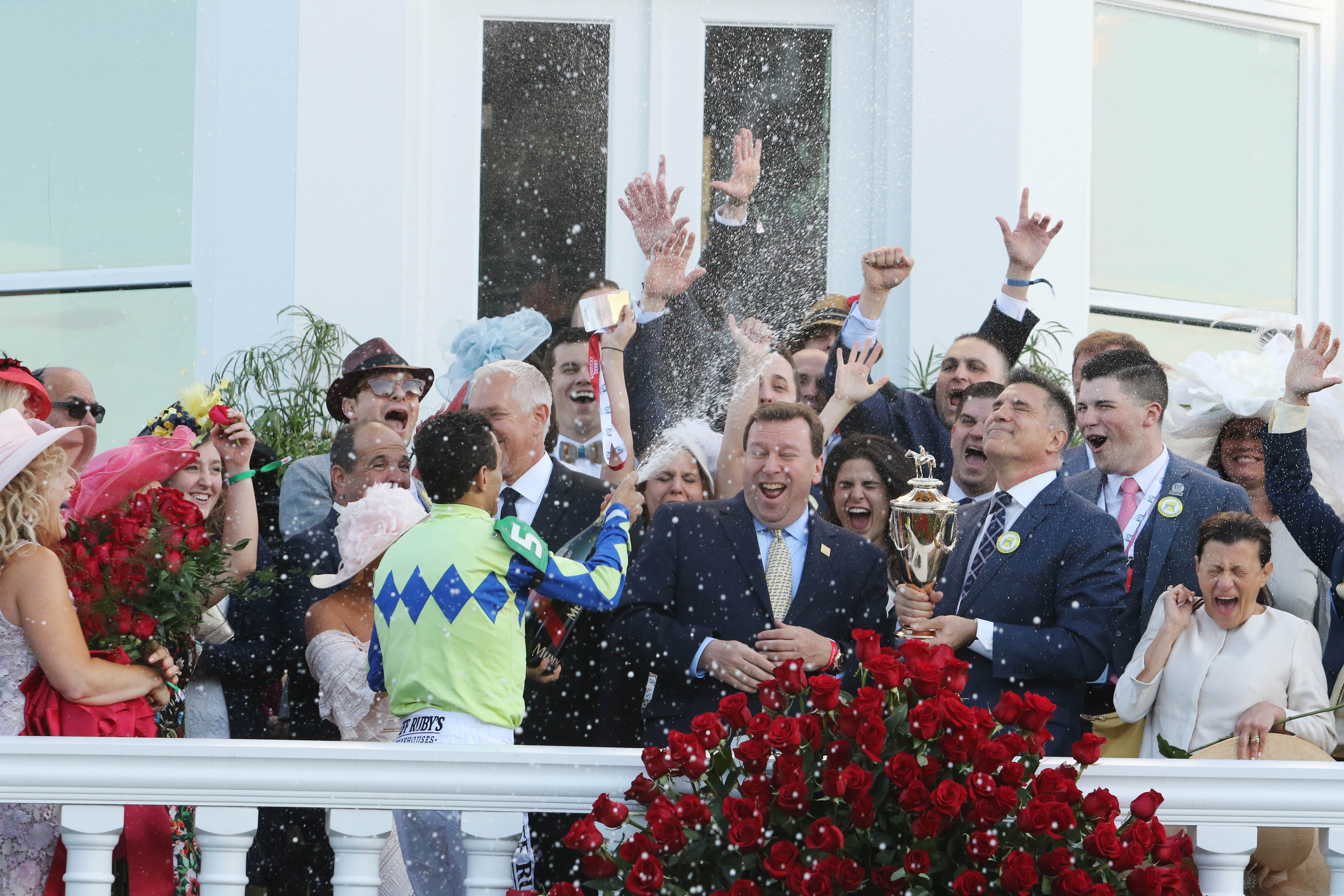 In Kentucky, horse racing culture and Bourbon culture are almost indistinguishable. The two industries grew up together, side by side, different aspects of the same agricultural traditions from the frontier days of the Commonwealth. Over the decades both traditions have turned into the signature industries of the Commonwealth of Kentucky, all the while maintaining strong ties between the two. Today both industries are more popular than ever and The Kentucky Derby, presented by Woodford Reserve, showcases this relationship internationally as the oldest continually running sporting event in the United States.

“Kentucky has long been known for two things, Bourbon and horses,” says Woodford Reserve assistant master distiller Elizabeth McCall. “The limestone filtered water is the link between the two. This water is nutrient rich, full of calcium, magnesium, potassium which contributes to strong bones for thoroughbreds and iron free, flavorful water to make Bourbon. The two industries are a perfect pairing, Woodford Reserve is the most well suited Kentucky Straight Bourbon Whiskey for the job. Our distillery is nestled amongst some of the most prestigious breeding farms in the industry and is one of the few distilleries where you can see Bourbon and young foals maturing side by side.”

“Legend has it that the industry kind of starts with the trips to New Orleans when people would buy fast horses for their trips home,” says Bourbon historian, Michael Veach. “The idea was that if your horse was faster than the bandits who were trying to rob you, you had a better chance of getting home alive. Once you got home, then you had a fast horse that you could then start breeding. We’re talking late 1700s to
early 1800s.”

Back then the rivers were the main highway system, but before steamboats were invented, the trip to sell your goods, including whiskey, in major markets such as New Orleans was often one-way. In fact, this well-known trade circle is believed by some historians, including Veach, to be the source of Bourbon’s name, having taken it from the street upon which it was most often enjoyed. This trip took a matter of weeks to get there by flat boat, but a matter of months to return. Horses could make that trip much faster and considerably safer.

Over the next several decades, many families in the distilling business also found themselves in the horse racing business.

“As Bourbon and horses are two of Kentucky’s signature industries, the paths do cross,” says Chris Goodlett, director of curatorial & educational affairs for the Kentucky Derby Museum. “The family of Hamilton C. Applegate owned stock in Churchill Downs, as well as a distillery and a horse farm. The name of their signature Bourbon was Old Rosebud, which was also the name of their 1914 Kentucky Derby winner. Wathen Knebelkamp became Churchill Downs president in 1959 after serving in leadership positions in both the Schenley and Bernheim distilleries. Warner
L. Jones, Jr. started Hermitage Farm in 1935, bred 1953 Kentucky Derby winner Dark Star and served as board chairman of Churchill Downs from 1984-1992. He descended from the family that started Four Roses.”

Historically you don’t have to look very hard to find distillers and distillery owners who were also horse owners or breeders.

“James E. Pepper and Ella Offutt Pepper owned Meadowthorpe Farm in addition to the distillery,” says James Pepper Distilling Co. visitor center manager, Marjorie Amon. “Pepper raced his horses in all the big races but he never won and he rarely sold. At the turn of the century he was overexposed in both whiskey and horses and wound up bankrupt, both the distillery and horses were seized. That’s when Ella went down to downtown Lexington and bought the horses back at auction, when everyone saw it was colonel pepper’s wife bidding on the horses, no one bid against her. She then took control of the horses, training them, racing them, and she did win the big races. In fact, she was so successful she earned herself the nickname “queen of the turf.” Her success was widely published and she ultimately earned enough money from selling her horses that she was able to stake the colonel to buy back the distillery out of foreclosure.”

Bourbon and horses are two of Kentucky’s signature industries

THE BEGINNING OF THE KENTUCKY DERBY

“The inaugural Kentucky Derby was run in 1875 at the Louisville Jockey Club and Driving Park Association, later known as Churchill Downs,” says Goodlett. “Meriwether Lewis Clark, Jr. was the founder and first president. Clark’s grandfather was William Clark, one half of the well-known Lewis and Clark expedition. The land on which to build the track was owned by Clark’s uncles, John and Henry Churchill (hence the name Churchill Downs). Clark was heavily influenced by racing in Europe and was particularly fond of the Epsom Derby, run at Epsom Downs in England. The Epsom Derby is a race for three-year-old thoroughbreds at a distance of 1.5 miles on grass. Clark’s Kentucky Derby was also designated for

three-year-olds at 1.5 miles, but run on the dirt. The Derby has been run at its current distance of 1.25 miles since 1896. The Derby has never missed a year and will be run for the 145th time in 2019, making it the oldest continuously held major sporting event in the United States.”

Clark was also related to George Rogers Clark, who founded the city of Louisville.

“The inaugural Derby in 1875 had an estimated attendance of 10,000,” continues Goodlett. “The average Derby attendance during the past 10 years has been more than 160,000, and its momentum is not slowing down any time soon.”

At The Kentucky Derby, traditions have been born and have grown stronger during the years. Even the iconic mint julep cocktail has been around since the beginning.

“All evidence points to mint juleps being part of the Kentucky Derby since the inaugural running in 1875,” says Goodlett. “Newspapers of the 19th century reference juleps in regards to thoroughbred racing. There are stories of lore and legend regarding early runnings of the Derby and juleps. One story states that Clark served a julep to actress Helena Modjeska in 1877, and she was quite the fan. Another story states that Clark grew mint for juleps behind the clubhouse in the 19th century. The julep begins to be marketed as the official beverage of the Derby in the 1930s, around the time of the creation of the official glass in 1939.”

Other iconic Kentucky Derby traditions have nothing to do with Bourbon, but they are just as recognizable.

“I’ll start with the Kentucky Derby Gold Cup, first presented in 1924 to the owner of the winning horse,” says Goodlett. “There has been one significant change to the trophy. In 1999, the horseshoe tines were turned up as lore says that tines turned down make the luck run out. I’d also mention the Garland of Roses draped over the horse in the winner’s circle, an annual tradition since 1932. Lastly, I would cite the singing of My Old Kentucky Home during the post parade, a tradition in some form since 1921.”

BOURBON AND HORSES IN THE MODERN ERA

Last year Woodford Reserve entered into a five year agreement to become the presenting sponsor of The Kentucky Derby, though parent company Brown-Forman has long sponsored and supported other aspects of horse racing, both at Churchill Downs and at other racetracks.

The history of sponsorship and advertising between the distilled spirits industry and
the horseracing industry goes way back to the beginning.

“Horse Racing has been used in spirits advertising for a long long time,” says Veach. “The Filson [Historical Society] has one that shows them drinking the whiskey as the horses are running to the finish line. And that dates from around the 1880s.”

Veach also points out that in the not-so-distant past, Woodford Reserve actually bought a racehorse and was offering shares in that horse. Ultimately, they decided to put their energy into sponsorships, which propelled both Bourbon and The Kentucky Derby into the international spotlight.

“Making the official toast on national television was definitely one of the most exciting moments of my career,” says McCall. “I spent the weeks leading up to it practicing at home in front of my husband, Matt. He would pretend he was the camera man or someone cheering. I was nervous and excited, it was such a huge honor. I’ll never forget the energy of that moment, surrounded by my colleagues and my husband by my side in the pouring rain to give this toast. Everyone was so pumped for Woodford, the Bourbon industry and Kentucky to have that moment, it was just incredible. I have the toast ingrained in my memory forever!”

“Today we celebrate 144 years of tradition. From the rolling pastures to the limestone rich water that makes our thoroughbreds strong and our Bourbon stronger. This moment we share our Kentucky, and today we are all Kentuckians. Please join Woodford Reserve as we raise a glass to cheers The Best of Kentucky on Kentucky’s best day!”

It may seem like the entire Bourbon industry takes two weeks off to party nonstop, but there is still a lot of work to be done during that time period.

“During Derby season my duties as assistant master distiller shift to focusing mainly on brand ambassadorship and PR for Woodford Reserve,” says McCall. “[master distiller] Chris Morris and I will divide the duties and do some things together such as host VIP guests at the distillery, attend events in town, head to NYC for media, talk about the $1,000 mint julep as often as possible. All that while still keeping a plus on happenings within production and helping when and where I can. It is a very busy time with a very unconventional work schedule, but I wouldn’t have it any other way.”

“I don’t know if I have the right words to describe what The Kentucky Derby means to me,” McCall continues. “I have grown up with a passion for horses. My mom would drop me off at the barn in the morning and pick me up late in the afternoon. There was no place I would rather be but at a barn riding, grooming and cleaning stalls. Horses are very special creatures. I own a thoroughbred and their love to run is impeccable. Racing is truly in their blood, their hearts long to race, they give everything they have not because of the glory winning but because it’s what they were born to do. My horse is an-off-the track thoroughbred, when we would arrive at shows he would turn into a completely different horse. It’s like a switch would flip, he knew what he was there to do, compete. The passion these horses have for what they do makes me tear up everytime.”

EVEN IF YOU CAN’T MAKE IT TO THE DERBY, YOU CAN STILL HORSE AROUND

Mint Julep Tours in Louisville offers horse farms as part of several of their tour packages. James Pepper Distillery in Lexington also dedicates a significant portion of its tour to the historic ties between the horse industry and the Bourbon industry. In between the two, you can stop by a thoroughbred horse farm for a tour nearly year round that has ties to both industries.

At Sun Valley Farm in Versailles the farm’s original owner was Samuel Pepper, whose father Elijah built the nearby Elijah Pepper Distillery, what today is called Woodford Reserve. (Samuel was also uncle to James E. Pepper.) You can even see many of Woodford Reserve’s rickhouses from the property, making this a great addition to a
Bourbon tour.

And of course, you can tune in on the first Saturday in May.

0 comments on “The Kentucky Derby – And they’re off!”