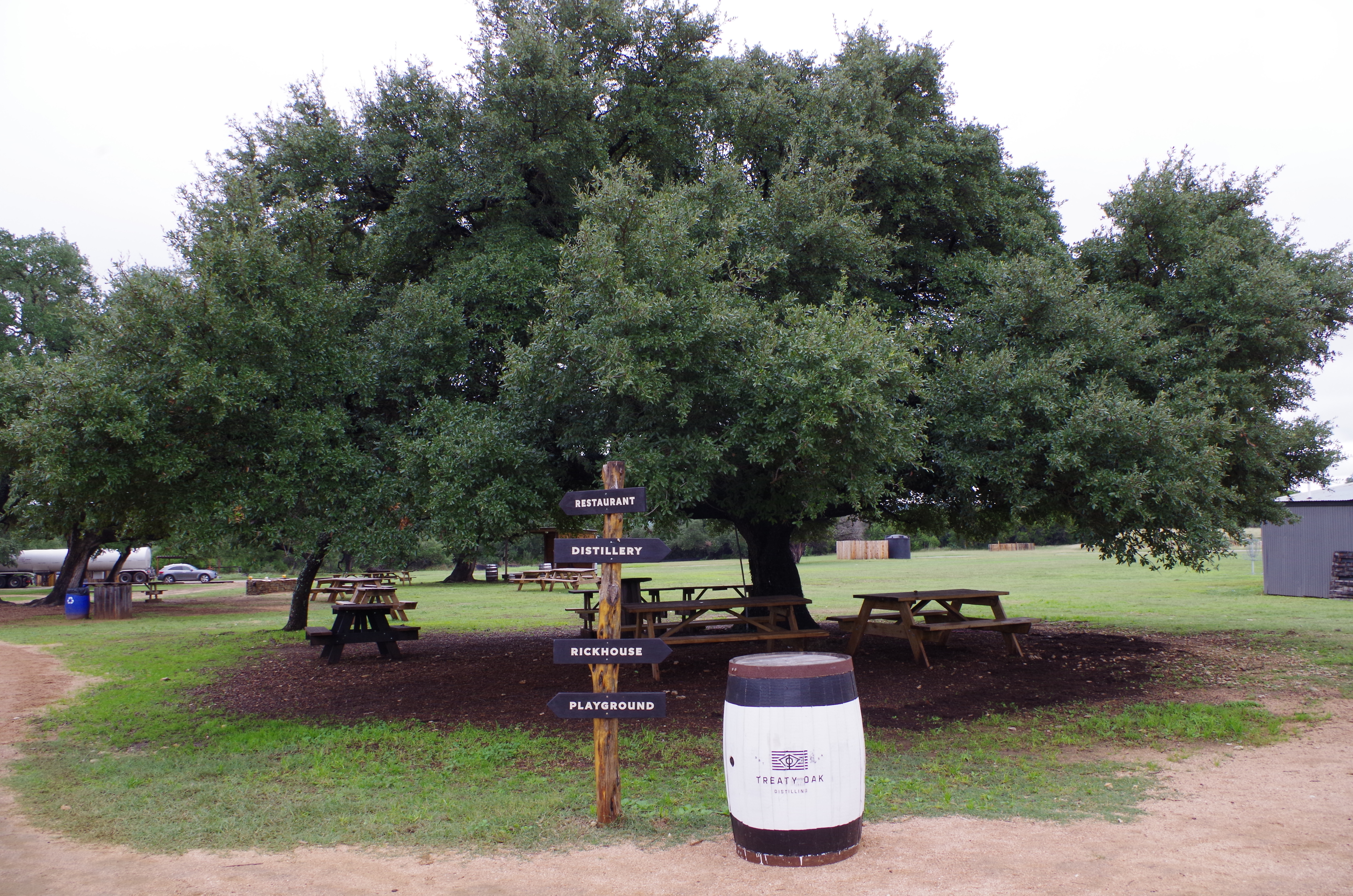 Having a home like this helps to bring you into the fold of other distilleries,” says Treaty Oak Distilling founder, Daniel Barnes. “It gives it that realness. That, and actually making good Bourbon.”

Back in 2006, Barnes opened the first iteration of Treaty Oak in an industrial area of North Austin, Texas. His father-in-law built his first still, which was open-fired like a turkey fryer.

“We only caught it on fire twice,” he laughs.

Today there are Vendome copper pot stills, and a column still on the way, in addition to brewery equipment. While the primary focus of Treaty Oak today is Bourbon and rye, they also make several gins, beer, and more.

“I see our economy as being upside-down – food and education makes the least and it should really be the other way around,” says Barnes. “I saw the distillery as the perfect agricultural opportunity.”

There were two locations in industrial areas of North Austin before Barnes bought the current ranch property in nearby Dripping Springs in 2013. The distillery building was built first, followed by the rick house and then the restaurant. Today there are buildings dotting the property, from the food truck to the cocktail bar, to the cocktail lab. Weekends are particularly busy at the distillery because there is live music and they bring in nearby vendors, like Smoky’s Mobile Cigar Lounge. The distillery becomes a weekend destination for the young professionals living in Austin and in fact the locals have nicknamed Dripping Springs ‘Drinking Springs’ for the mass of distilleries and breweries that have popped up in the area. Alice’s, the on-site restaurant named for the founder’s mother, is a culinary destination in its own right.

Today this one-time one-man operation has grown to include over a dozen employees, including his business partner and longtime friend Nate Powell. Powell’s current title is VP of Sales, but as with many folks who work in small businesses he wears many hats.

“I wanted to get back into a hands-on artisanal crafting job working with a team that was passionate about what they do,” says Powell. “It took 12 years to finally have all the pieces in place, that was phase one. Phase two is going to be harder, but it’s going to be a lot more rewarding. The next three to five years it’s going to be about, how do I get every single person I meet to walk away with the same feeling about our product and story that I have.”

Powell’s job takes him on the road opening up new markets to Treaty Oak’s products.

Many of the spirits selling under Treaty Oak’s labels are sourced, but the team has always done their best to be transparent about that. The Red-Handed line of products are sourced, but the Ghost Hill line of products are made right there at Treaty Oak. There’s always room for experimentation, and there’s even an upcoming series called the Graveyard Series that has been buried underground to age for a couple of years in an attempt to learn how underground aging is different.

Entering the next phase of growth, no looking back

Because of the emphasis on foodways and agriculture, Barnes has made some good friends and allies within the local community. One such ally is James Brown, who Barnes and Powell lovingly refer to as the “Godfather of Corn.” Brown runs the local mill and is heavily involved in farming within the community. He recently brought back Oaxacan Green corn from the brink of extinction by purchasing the last few pounds of seed available and planting it in the middle of a large plot, so as to keep open pollination at bay.

Next, he’s going to be opening a gristmill on Treaty Oak’s property to ensure a steady supply of ground grains for the distillery.

Production kinks are running smoothly, and there’s now a steady supply of aged whiskey to sell, which means Treaty Oak is moving into its next growth phase.

“Being in a place where we know we have a grain to glass Bourbon and having a steady supply, that’s really nice to see coming to fruition,” says Barnes.

“We talk about Kentucky Bourbon and we drink Kentucky Bourbon. That’s what got us started,” says Powell. “I want people to understand that Treaty Oak has a tremendous amount of respect for what Bourbon is. We want people to have that in mind when they are drinking our products. It’s a tribute to that heritage. This is our expression of Bourbon, but it’s a Bourbon with its own nuances and personality.”

“We strive to strike the perfect balance between heritage and innovation,” said Barnes in a press release. “Our willingness to be different based on knowledge and expertise is what sets us apart.”

There’s collaboration in the future, with a partnership with Mahalo spirits, which also partners with Bardstown Bourbon Company.

Treaty Oak is certainly a distillery to keep your eye on.