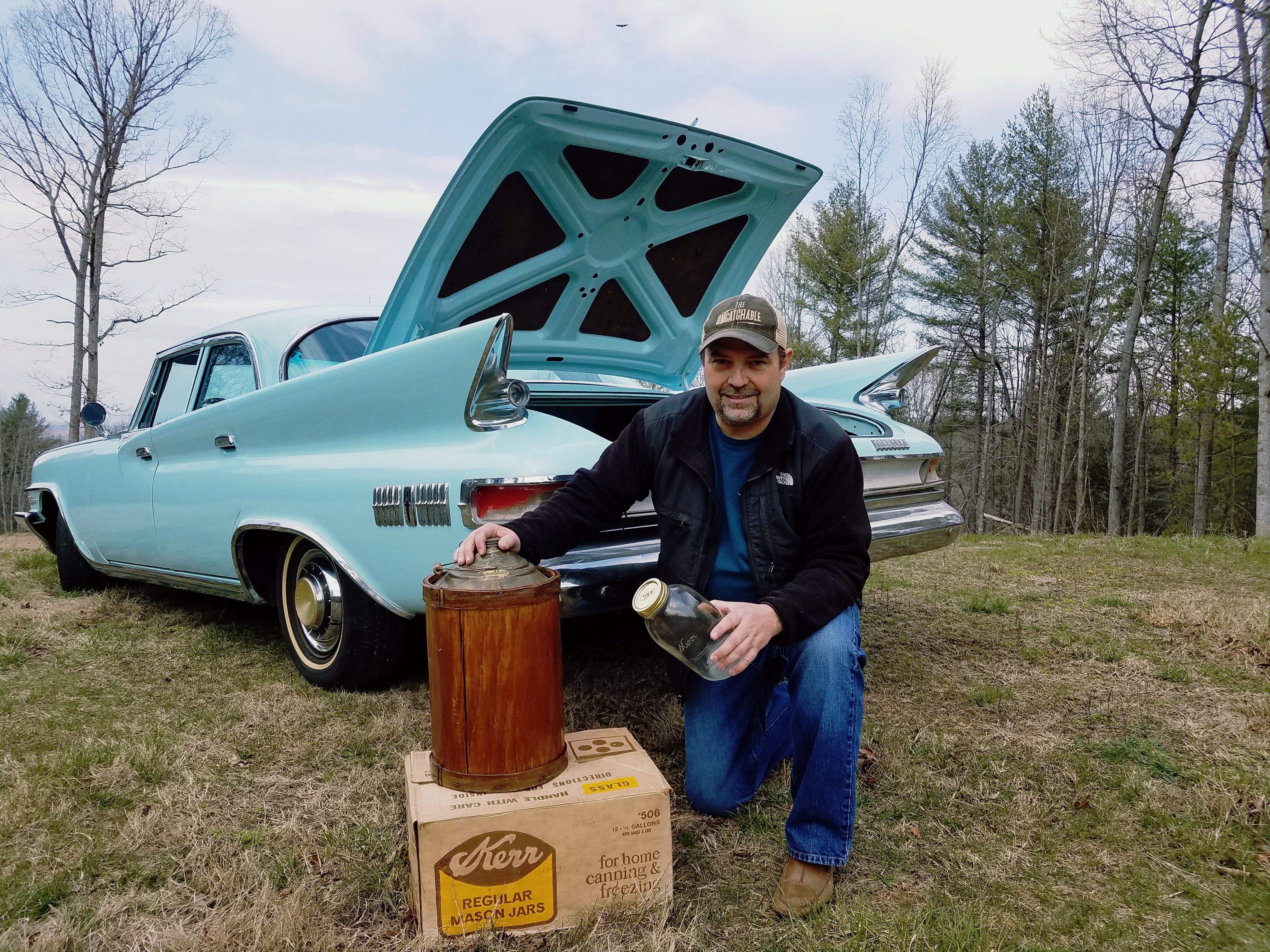 From fast cars to distillation, a family legacy in whiskey

Call Family master distiller Brian Call says, “My dad passed away six years ago. That very day we mashed in 1,000 Gallons of sour mash moonshine; we distilled off some moonshine together. He got to do what he loved to the end. I was lucky I got to work beside him and learn everything he passed down.”

For most, including Brian, the very mention of Wilkes County, North Carolina, brings to mind images of moonshiners tending copper kettles in hideaway leafy hollows, of fast cars hauling ‘shine down dirt roads at a hundred miles an hour – the law, ever hot on their tails.

Small wonder folks hereabouts know so much on the legends and lore of Prohibition and long era illicit distillation of whiskey; veteran residents proudly tell their ‘shine tales, adventures of parents, grandparents, whose grandparents before who made whiskey, good whiskey, in times when whiskey was about the only available legal tender, folks like distiller Brian Call.

Generations of Calls made whiskey in splendidly mountainous Wilkes County. Revered as the ‘Moonshine Capital of The World’, idyllic rolling hills sprinkled with leafy hollows and cool springs are perfect for clandestine whisky making…

Proclaimed by the law as ‘uncatchable’ Willie Clay ran dozens of souped-up cars – and it’s his legendary 1961 Chrysler New Yorker that I’m taking it for a spin!

For American Whiskey Magazine, I spoke with former U.S. Treasury ATF agent, Joseph (joe) Edison Carter; the self-same agent who arrested Junior Johnson (at his father’s still, not in his car) just days before Joe, too, passed into moonshine history (March 10 1928 – Jan 25 2018).

Joe admits trying to catch Willie Clay Call, Brian’s father, back the 1950s and ‘60s, when Government issue cars were no match for moonshiners’ rigs, those wolves in sheep’s clothing, with cunningly modified Cadillac V8 ex-ambulance motors under their hoods

In his thrilling memoir Shortcuts to Justice (1999) Joe rants, “You know I couldn’t catch him in his souped-up hot rod liquor car and me driving that goddamn government purchased Mickey Mouse mechanical miscarriage called an automobile.”

Asked to find period cars for a reenactment moonshine movie years after, agent Carter stopped by to visit his former advisary.  “Willie Call was very friendly and extremely cooperative. Something about him seemed familiar and I mentioned this fact to him.

“‘By God,’ Willie Call had said, ‘I ought to look familiar to you. I went to prison… and you’re the son-of-a-bitch who sent me…’

“I had seized his brand new 1960 Dodge liquor car with all kinds of stuff on it including the fastest racing engine I had ever driven. Oh, yes! I loved that car! After I seized it and it was forfeited to the U.S. Government,it was assigned to me as an official investigative car. It was the fastest car I have ever seen. So hot that hell wouldn’t hold it.”

“I had not seen Junior since I arrested him for running a monster still many years ago,” Carter reminisced.

As a peace offering Carter took along a little model copper distillery to give to Junior, telling him it was to replace the one he blew up when he was arrested, asking if Junior remembered him.

“I won’t ever forget, I thought of you every night I was in prison,” Junior quipped before escorting his guests around his Ingle Hollow home and racing headquarters; the exact area where Junior was arrested.

During the 1800s the boy Jasper “Jack” Daniel, runt of the family, fed up with teasing from older siblings and a stepmother of questionable affections, ran away from home, finding sanctuary at the nearby Call Farm, home of Rev. Daniel Call and his teetotaler wife Mary Jane whose farm sits on outskirts of Lynchburg TN.

Jack began working at Daniel Call’s general store behind which the Lutheran minister ran a still, one of hundreds dotting the rolling countryside back then.

It was here, according to Jack Daniel’s Distillery tour guides, that Reverend Dan Call, who came from a long line of distillers, and former African American slave “Uncle” Nearest Green instructed Jack on the art of turning pure water and corn into whiskey, the genesis of Willie Call’s characteristic recipes as found in today’s Call Family Distillery superb whiskeys.

Brian relates  how young Jack Daniel was already making with Reverend Dan Call during the 1860s, “But when the temperance movement swept through America – saying a preacher shouldn’t be making whisky – Reverend Dan chose to stay with the ministry, selling his stake in the distillery to Jack.”

Now here’s a honey colored delight, smooth and mellow which harkens back to a memorable history, painstakingly distilled in “The Bull,” a 2,100 gallon direct steam injection still custom designed by Willie Clay’s son, Brian, a seventh generation distiller; so you know he knows the craft.

As a boy Brian helped his dad deliver illicit brandy, likely in one of three vintage liquor cars kept polished and displayed in the distillery’s mash room. “I was helping make a delivery one morning, lifting cases from the trunk, but I came up too quick, gashed my head open,” Brian remembers. “Pop looks at me and he says ‘son, one thing you gotta remember, never get excited.’”

“My grandpa ran that one way back deep in the woods, until revenuers found it and took axes to bust it up. This ol’ 500-gallon beauty could make 70 to 80 gallons of moonshine a day!”

Climbing a step ladder I dip a finger into a bubbling fermenting vat, tasting the sweet mash. Sampling too, Austin, Brian’s 20-year-old son, tells me he’s headed to college to learn distilling!

“Most people ask me why I’m going to school to learn to make alcohol when my dad already knows how.  Yes, my dad does make great liquor, but there is so much more to it,” he nods. “Sure I’ve helped my father run the still, but I’ve never ran it by myself.

“The main reason I want to pursue this degree is to provide more knowledge about alcohol and to provide different types such as Bourbon, whiskey, and gin.

“I hope with the knowledge I’ll be able to expand our products, and preserve our Call Family heritage.”

As Brian and I salute their portrait with a nip of Uncatchable moonshine; and I suspect I saw them smile.

0 comments on “Call of the corn”