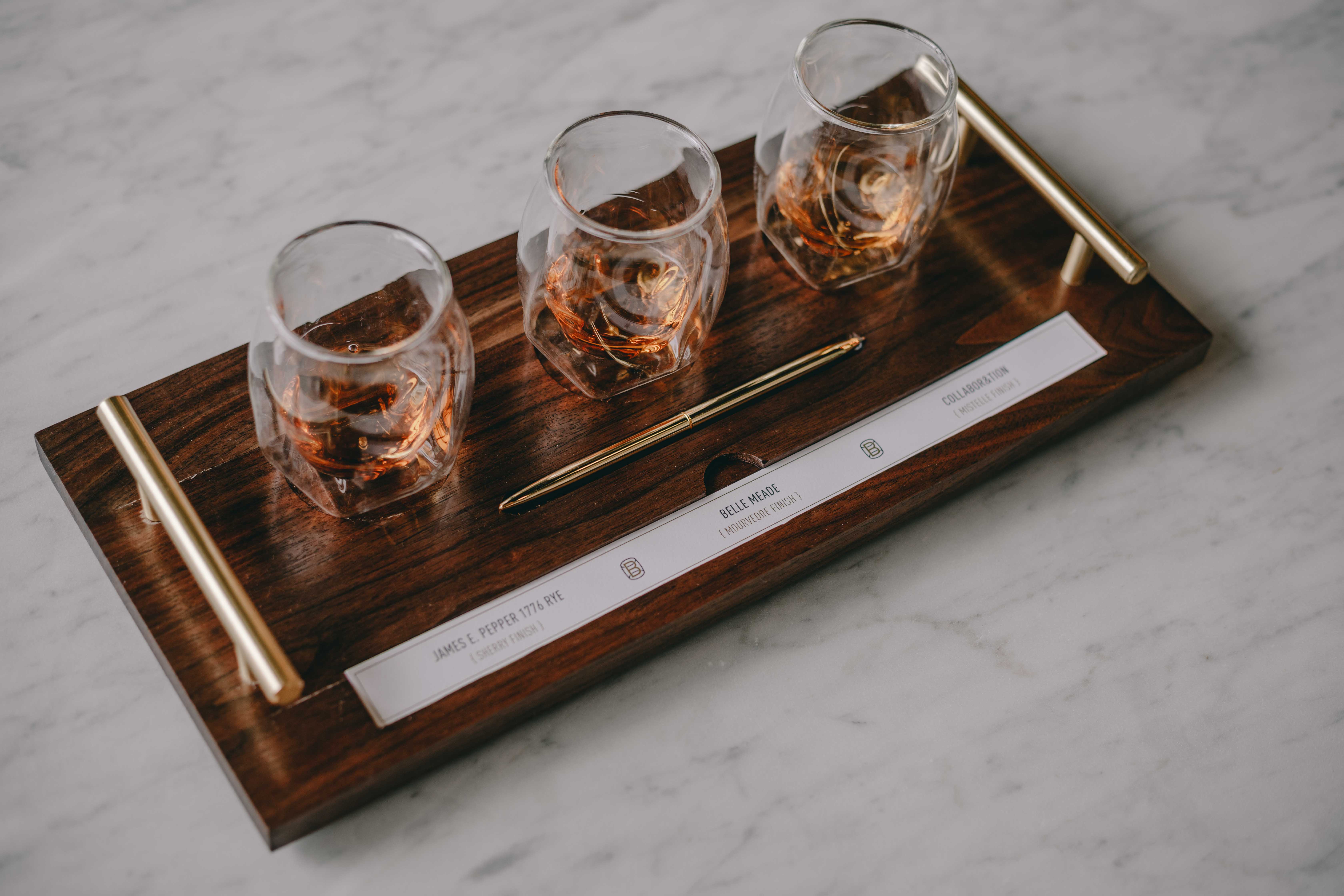 Until just five years ago, the site of Bardstown Bourbon Company’s thoroughly modern distillery was 100 acres of farmland located along the Bluegrass Parkway about four miles east of the Bardstown town center. And it was a gleam in the eye of BBC president and CEO, David Mandell.

He and his partners were looking at city-owned property and spied another plot across the road. Mandell said to their Bardstown host, “What about that property? It’s gorgeous.” He recalls that she replied “Oh no, no, no. That’s our best. We’re not actually selling that.”

But Mandell was persistent. He made an offer for the land that the city couldn’t turn down and construction began. The result is what he describes as his “vision for the Napa-style destination.” But this time, instead of in Northern California, visitors would have a stylish, sophisticated food and beverage experience in Central Kentucky.

BBC started production in September 2016. The main distillery building is a striking departure from those of Kentucky’s heritage producers, several of which are listed on the National Register of Historic Places. Constructed of tall glass panels framed by stone, on a cloudy day the interior lights make it glow like a museum case housing precious jewels. It is surrounded by fields of corn and wheat, grown on the property and used in BBC’s whiskies.

When visitors walk through the front door, the first thing they notice is a dark green wall of live moss with the logo of the distillery embedded on the surface. To the right is a bar with backlit shelves reaching to the high ceiling. It is stocked not only with BBC’s whiskeys, but also with those of all the Kentucky distilleries, a selection of other spirits, of a carefully curated wine list, and an impressive selection of Kentucky craft beers on tap. Visitors can choose to have a drink (and yes, the cocktails are carefully crafted), but the bar is also there in support of BBC’s restaurant, Bottle & Bond Kitchen and Bar.

While other distilleries have offered food on site (often sandwiches) for a few years, and some even have chefs-in-residence, multiple course menus have usually only been offered for special events. Bottle & Bond is a full service restaurant taking up the spacious room just inside the entrance, with a view of the distillery through a glass wall opposite the bar. It serves lunch Tuesday through Sunday and dinner Tuesday through Saturday.

Executive chef Felix Mossa, who was recruited from the famed Greenbriar Resort in West Virginia, heads the kitchen.

His menu’s dishes have a distinctive Southern accent, but are prepared with gourmet flair. And he sources ingredients locally whenever possible.

Examples from the “shareables” selection (perfect with the bar’s cocktails, by the way) include a four-cheese mac and cheese, chicken fried oysters, glazed Brussels sprouts with Bourbon bacon and sweet potato gnocchi. There are cheese and charcuterie plates, artisan breads, and a selection of tapenades.

Among sandwiches are brisket or poached chicken salad. And on the salad menu you’ll find a baby kale, quinoa and arugula mix, given a Kentucky accent with the addition of beets and peppered bacon.

Or diners with a sweet tooth could choose from a selection of “boozy milkshakes” easily large enough for two, such as Banana Bourbon, made with Old Forester Signature,  banana, toasted marshmallow and vanilla ice cream. There is no problem tasting the whiskey in this.

As if the selection of more than 200 Bourbons, other American whiskeys and international styles (Scotch, Irish, Japanese and more) currently on the market were not enough, BBC also maintains a historic 400-bottle Whiskey Library, curated by Bourbon writer, Fred Minnick.

“It’s not thousands and thousand [of bottles],” explains Callaway, “But what we have are all incredibly special.”

That may be an understatement.

Several bottles, such as Cedar Brook Handmade Sour Mash Whiskey were distilled and bottled in the 19th century. Among 20 century, pre-Prohibition brands on hand are Old Darling (distilled in 1911, bottled 1919) and Overholt Rye (distillations from 1908 and 1909).

The collection contains many bottles from the distilleries licensed to sell medicinal whiskey during Prohibition, and bottles from every decade since Repeal, including many modern, but hard-to-find limited releases, such as Old Forster Birthday Bourbons, Four Roses Limited Editions, the Buffalo Trace Antique Collection, and anything with Van Winkle on the label.

Perhaps the centerpiece of the collection is the Old Crow Chess Decanter Set. This consists of 32 750 ml ceramic decanters fashioned into a large chess set.

Dating from the mid 1960s and made at the Old Crow Distillery in Frankfort, Kentucky, the Bourbon is 10 years old and bottled at 86 proof.

But do bear in mind that this limited supply of very rare whiskeys also comes with an understandably high price tag. Many weigh in at more than $1,000 for a one-ounce pour. That said, the Old Crow Chess Set is a more modest $50 per pour, which compares very favorably to one-ounce servings at many upscale whiskey bars.

Of course, at the center of Bardstown Bourbon Company is the distillery itself. Mandell stresses that he was determined to assemble a “great team” at BBC and he managed to recruit Kentucky Bourbon Hall of Fame master distiller, Steve Nally to oversee the production side of the operation.

Nally worked at Maker’s Mark for 33 years, including many years as its master distiller. He also helped launch Wyoming Whiskey, which released its first batch in 2012.

Nally also oversees the distillation of whiskey for 23 contract customers using 37 recipes. In addition to Bourbons, these include ryes, malted whiskies, and soon whiskies distilled with heirloom grains.

This volume means that the distillery has expanded capacity not once, but twice, since it opened, most recently last year when added a second 50-foot Vendome copper-lined stainless steel column still. The fermenter building contains 16 12,500 fermenters. The total distillery capacity is more than six million proof gallons or about 100,000 barrels annually.

Currently, BBC bottles two expressions of its brand called Collabor&tion, which reflects the collaborative philosophy of Mandell and his team. 10-year-old stocks of sourced, cask strength Bourbons were each finished for 18 months in American brandy barrels from Louisville distillery Copper & Kings and Muscat Mistelle wine barrels respectively. Future bottlings will include several blends of older Bourbons with those produced at BBC (the Fusion Series), as well as whiskeys of their own which are now aging in the distillery’s warehouse.

Finally, two more components of what Mandell and Callaway have each described as “the total visitor sensory experience” are scheduled to open this year and next. “We will have a visitor center with a tasting bar where visitors can use tasting knowledge to then create cocktails,” said Callaway.  It will open this summer.

Callaway added, putting the cap on “the Napa vision” that, “By 2020 we hope to open our 72-room boutique hotel.”