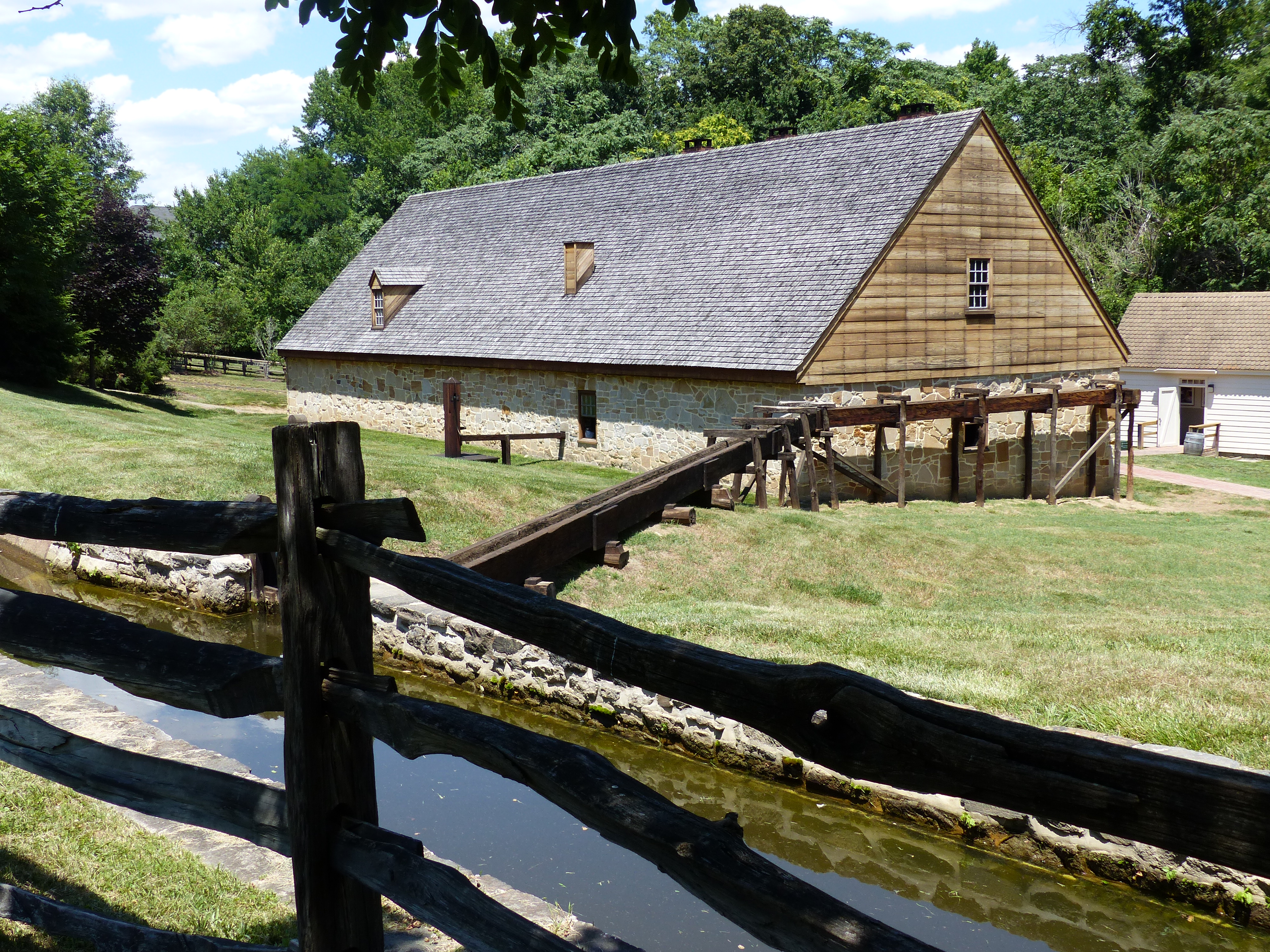 The Whisky Couple head out on a road trip

Last summer we were invited by our New York publisher Workman to do a promotional tour for A Field Guide to Whisky. The route was planned beforehand and took us through a whopping 14 states in the following sequence – Florida, Georgia, Alabama, Tennessee, Kentucky, Ohio, West Virginia, Pennsylvania, New York, Delaware, Maryland, Virginia, North Carolina and last but not least South Carolina, where we live part of the year in the beautiful city of Charleston. In a mere four weeks we would digest more than 3,400 miles [5,500 km] of asphalt by car. Life on the road as we know it…

Heading south when still in Maryland, we decided to make a detour and visit George Washington’s restored distillery in Mount Vernon. Becky had an ulterior motive. She wanted to show me where she was born  – at Fort Belvoir (her father is a retired US Army Lieutenant Colonel) across from Washington’s old estate. Not far from the distillery stands a remarkable architectural object – the Pope-Leighey House, designed by no one less than Frank Lloyd Wright. As a young girl Becky played in that house, since Mrs. Leighey was a close friend of her mother’s. Mrs. Leighey left the house to the National Trust for Historic Preservation and since then it has been a museum. We would have to investigate that place, too.

But first, there is the distillery, originally built in 1797 but burnt down in 1814. Two centuries later, around 1995 after foundations were excavated, it was decided to restore the historic buildings to their former splendor, complete with a gristmill driven by waterpower. With the aid of DISCUS (the American equivalent of the SWA) it took nearly 10 years before George Washington’s distillery arose from the ashes, built as an exact replica based on the man’s own 18th century notes. The former president was known for meticulously documenting his life in extensive diaries. Even his original recipe for rye whiskey was found and is now used again. How authentic can you get?

Steve Bashore, involved with the project from the start and director of historic trades, awaits us. He is not only responsible for the distillery but also for the mill, farm, smithy and some other artisanal activities on the Mount Vernon Estate.

Steve was a miller by profession when he became involved and went on various trips to the Netherlands to study old mills. Hence, we start the tour at the gristmill, built on the foundations of a 1932 predecessor. This part of the grounds on Dogue Creek was incorporated into Mount Vernon Estate in 1995 and now is an integral part of the monumental site and house, open for visitors as well.

Steve explains why Washington built a mill around 1770, “He made a switch from tobacco to grain and had his reasons. First the soil got exhausted and secondly the market for tobacco became saturated. The third reason was diversification – after the Revolutionary War, he also wanted to earn money with grinding corn on a commercial scale.”

Our host continues enthusiastically with his story: “In 1791, when the war was over, a whisky merchant from Inverkeithing in Scotland decided to immigrate to America. This man, a Mr. Anderson, saw the negative effects on his business from the English raising taxes on hard liquor in 1788 and 1789. He decided to take his wife and children to the new world and establish himself as a farmer upon arrival. In 1797 he noticed an ad in the newspaper in which George Washington asked for a new farm manager. Anderson wrote a letter and the rest is history. He suggested to his new employer to start distilling, which would make Washington a little fortune in years to come.”

I kindly raise my hand to temporarily stop Steve’s expansive historical essay. After all, we are here to see the distillery in the now. He smiles and takes us into the gristmill, asking the operator on duty to start the machine. It is a great sight but too noisy for a conversation, so we walk outside, where Steve continues, “We have two sets of mill stones. One is for rye and made of French quartzite. The other is from American granite and we use that set for corn. The upper stone rotates, the lower one is stationary and we can adjust the distance between them. In doing so we can vary between coarse and fine meal. Both sets can be operated at the same time.”

Last March the mill processed 10,000 pounds of grain for the distillery’s March Whisky Run. Whiskey is only made twice a year. The other run takes place in November. Between April and October the complex serves tourist and educational purposes.

“At the start we got a lot of help from the industry. People like Dave Pickerell, retired master distiller from Maker’s Mark, as well as Joe Dangler from Virginia Gentleman and Lisa Wicker of Preservation Distillery.”

Rye and corn are sourced from farms in Virginia. Currently the yeast arrives from Firm Solutions but plans are in the making to grow proprietary yeast on the estate. “A future development,” Steve mentions. “The small amount of malted barley we need is delivered by a distributor.”

Meanwhile we walk from the mill to the distillery and enjoy the picturesque setting, crossing the little stream that feeds the complex with water. Not only the mill but also the distillery is fed via a lade, which we recognize from Scottish distilleries. The entire site is beautifully laid out and Steve emphasizes that this has all been done following the original designs. “It is a genuine time warp!”

Having arrived at the distillery building we want to know the recipe. “From Washington’s notebooks we know exactly how Anderson made his whiskey. The mash bill contains 60 per cent rye, 35 per cent corn and 15 per cent malted barley.” Our sympathetic host grins, “To be accurate, we are talking rye whiskey here, not Bourbon!”

“The open boiler is filled with tap water that has been filtered beforehand and heated with a wood fire up to 212°F [100°C]. Our mashing barrels can contain 110 gallons and we mainly use three at the same time. First we put the corn in, then the rye and after a few hours, when the temperature of the water is lowered to about 150°F [65.5°C], we add the malted barley. An original wooden rake is used to stir the mash manually. It’s heavy work, but everything is done here as if we still were in the 18th century.”

Mashing takes a day after which yeast is added to the same barrels. Fermentation continues for three days. The fermented beer, as the wash is called here, is hand ladled into the pot stills, which are wood fired, too. “We administer the cut based on smell and we aim for a sweet mash whiskey – no sour mash is added from the previous batch.”

“The ambient temperature influences the entire process. As soon as the stills are fired up, it is much warmer in the room and this means fermentation may speed up considerably.” Much is left to chance. Five pot stills are ready for use, but do not operate together at the same time. In the corner we see a replica of a still from 1794, made by Vendome in Louisville, Kentucky. “The original can be admired in the Smithsonian,” clarifies Steve.

Eventually the distilled spirit is put into 25 gallon barrels [95 liter]. The barrels are charred level 3 on the inside. The limited size allows the whiskey to pick up character rapidly over a short period of time.

We will experience that later in the tasting room, when sampling a 2-year-old rye whiskey.

“In the foreseeable future we may start using 53 gallon [200 liter] barrels char 4, maturing our whiskey up to 5 or 6 years and then compare the result with the 2-year-old.”

Not having a stencil to stamp the barrels, all are coded manually by Steve, who motions us to walk to the visitor center annex shop. The 2-year-old rye whiskey is for sale at $188 in 375 ml bottles. Scarcity, manual labor and uniqueness have their price.

That’s a way to go for Steve, apart from the fact that he will need another type of license for such annual output.

“But, we do not aim for such production figures,” he concludes. “We may only crank up production a little for a few limited editions.” As a thank you for the more than three hours he spent with us, we offer him a copy of the Field Guide, which actually has a story about the first President of the USA and his role in the American whiskey industry.

To our huge surprise he returns the favor by handing us a full bottle of his valuable Mount Vernon rye whiskey.

That is going back to the Netherlands to share with some dedicated friends.

In a happy and contented mood we walk back to the parking lot and continue our trip to Becky’s old stomping ground, the impressive Frank Lloyd Wright designed Pope-Leighey house.

It really is an astonishing house and many Americans will love this, pride of place.

0 comments on “Recreating the President’s past”