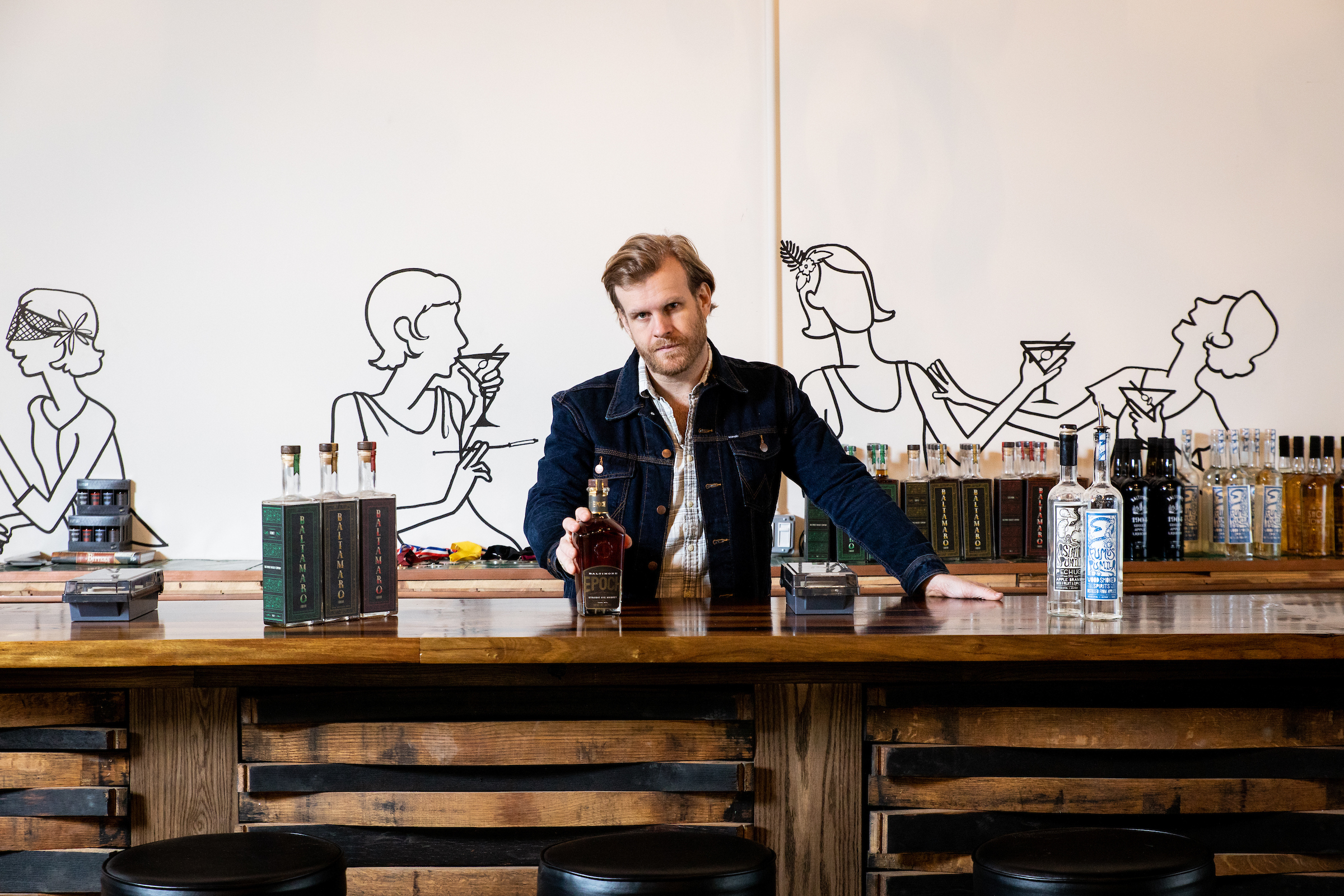 From modest beginnings as a home-brewer, to running an award-winning distillery, our interviewee this week has gained extensive knowledge of the industry in a relatively short space of time. Max Lents, founder and CEO at Baltimore Spirits Company talks us through the milestone moments that have brought the team and their spirits into the limelight.

American Whiskey Mag (AWM): So, tell me about Baltimore Spirits Company, what was the defining moment that made you say hey, we’ve got something here and go for it?

Max Lents (ML): The first person I brewed with was my now co-owner Ian Newton, and the second person – bear in mind these were years apart – was my other co-owner Eli Breitburg-Smith. The fact that we’re all together making spirits for the world now seems like destiny in hindsight.

There was a real revelation during the early days. We were distilling anything and everything: wine mixed with beer, liqueurs sweetened with malt, fruit, sugar, you name it. But the things that were really lighting us on fire were the things that no one had done before.

People get into distilling for a multitude of different reasons, but we’re creatives at heart. When we were reading all the books, drinking all the interesting spirits we could find, and putting everything we could think of in the still, we were just completely taken by how much frontier there was left in distilling – there is plenty of room for new expressions in the industry.

The passion for creativity is really what drove the business plan, and probably the main thing that got us through the early years.

AWM: And leading on from that, how long has the brand been going and could you pinpoint any particular milestones during that time?

ML: We distilled our first licensed spirits at the end of 2015. In 2016 we released our Mescal style Apple Brandy, the 1904 Apple Brandy liqueur, and the Barreled Shot Tower Gin. Those first four spirits were each huge emotional payoff for us and remained our core line-up for a little while.

The whiskey release in 2018 was a real moment for our team. In a way, whiskey is a dangerous thing to produce and no matter what you do to ensure quality from the outset, you never know how something is going to develop in a barrel, especially if you’re trying to do something brand new. We knew from day one that we didn’t want to source our whiskey from another distillery, it just didn’t speak to our creative sensibilities. We also knew that we didn’t want to do a short age, small barrel whiskey. For us, there wasn’t a world class whiskey we could name that was produced that way and therefore we took the long road, using full sized barrels, for two years minimum.

Emptying that first barrel was euphoric. I really don’t know what we did to deserve such luck, but all the difficult decisions we made early on, from committing to the slowest pot-still runs, open top fermenters and high-quality barrels had come together to create something spectacular.

The very first barrel of Epoch Straight Rye to come out ended up winning Double Gold at the San Francisco World Spirits Competition that year. The success of the whiskey led us to grow up a little bit and move to a bigger facility, where we can make enough whiskey to satisfy at least some of the demand for it.

AWM: Could you tell me about Union Collective and how you have ended up distilling there? How much of an impact do you think it has had on your spirits?

ML: We’ve been producing in our new distillery for about nine months, so it’s pretty fresh. We were invited to the first secret meeting for potential collective partners just before the whiskey was released.

Our initial thought was that it was too early for us to move and it felt like we had just settled in the first spot. But leaving the meeting after seeing the space, our eyes were wide and we knew it was an opportunity that we wouldn’t pass up on.

Since moving we have expanded the production capacity, while remaining committed to the same processes that made our spirits so memorable in the first place. We then had a second pot still made, designed after our original custom still, and use them both in tandem.

Hopefully the only change in our spirits is how available they are, but for now our whiskey numbers won’t increase for a few more years as we are waiting for the Union Collective made whiskey to age.

AWM: What would you say your approach is as a team when it comes to creating new spirits?

ML: The new stuff always starts the same way, with one of us getting very, very excited about an idea. We’re a small team so there aren’t a lot of people to say no, but there is a catch, it has to be remarkable.

We still use the old moonshining still from our kitchen days to run test batches. We have incredibly high standards when it comes to releases, even if we like something it doesn’t mean it’s good enough to commit us to a new release. We often pull experience from our abandoned projects into these new ideas and at some point, the perfect storm of a new idea syncs with experience from our constant experimentation and we stumble upon something remarkable. That’s what goes into a bottle.

AWM: Leading on from that, we would love to hear about any new rye whiskey profiles you’re creating?

ML: We have quite a few on the way! These will be very small releases and look likely to sell out in an afternoon, but we’re still thrilled about them. Some are older and stronger expressions of our Epoch Rye, and some are barrel finished Epoch.

Looking at an industry wide perspective, I think there are some exciting things starting to happen. 10 years ago, if you looked at the Rye shelf, you’d be lucky to find much choice, whereas now you might find 40. Although the majority of those are sourced from the same distillery, so it’s not quiteas exciting as it sounds. However, we’re finally starting to see some genuinely new expressions hit the shelves and that’s what gets me excited.

AWM: Lastly, are there any projects you are working on currently or that are in the pipeline that you could share with us?

ML: I’ll give you a little sneak peek at something in the pipeline. Smoked Pommeau has made it out of development and into a barrel. It’s a few months old now and already amazing.

For any readers who don’t know of Pommeau, it’s a fortified drink that is similar to Port wine, but made from apples instead of grapes.

We stole some partially fermented apple juice from our smoked apple fermentation, put it into a used Epoch Rye barrel, and brought it up to about 20% ABV with our unsmoked Apple Brandy. I can’t really explain to you how indulgent, spectacular, and original it is, so add it to the list of things we do that aren’t done anywhere else!

We’re not sure how long we’ll leave it in the barrel though, so don’t hold your breath. At some point we won’t be able to contain it any longer and the first smoked, fortified apple wine will be released upon the world.