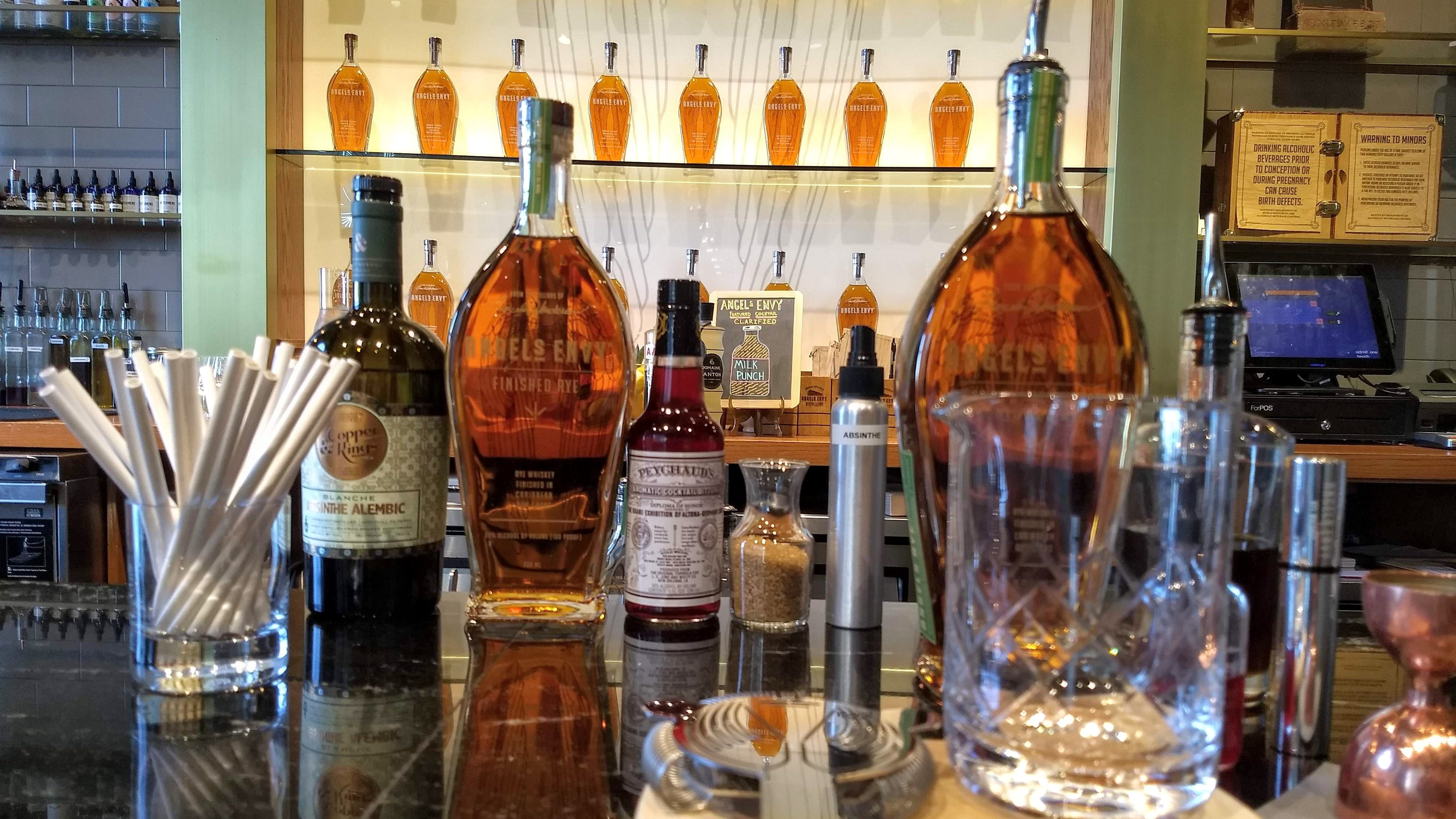 Distillery tourism in Louisville has taken off in the last few years. Until 2013 there were no distillery visitor centers in Louisville, and today there are eight. These are places where you can see smaller versions of their larger counterparts in some cases, while in others it’s the entire operation, save for barrel storage. Angel’s Envy is one such distillery opened in 2016 on Louisville’s Main Street, though the brand goes back much further. Recently, I was invited to a rye cocktail class at the distillery, which was every bit as fun as it sounds.

Angel’s Envy was founded by Brown-Forman alum Lincoln Henderson along with his son, Wes Henderson, and his grandsons, of which there are six but only two old enough to work in the family business as of yet.The elder Henderson was the father of Woodford Reserve and developed such lines as the Gentleman Jack line of Jack Daniel’s during his tenure. He retired but his retirement was short-lived — his son approached him with the idea to start a family whiskey business to keep his whiskey legacy going.

The family came up with the idea to finish bourbon in port wine casks. This wasn’t something that was unheard of in the whiskey business — Scotch has long been finished in used wine barrels. But in the bourbon world, finishing in wine casks was a relatively new concept. Then came the brand’s rye whiskey, finished in rum barrels — another new-ish idea.

The evening began with a tour of the distillery, located in a historic downtown Louisville building where hand tools were once made known as Vermont American. As it turns out, Lincoln Henderson’s father had worked there, a fact he realized when he went to tour the newly acquired building with his family. Technically four generations of Hendersons have worked in that building now.

After the tour we had a tasting of both the Angel’s Envy Bourbon and the Angel’s Envy Rye in the gorgeous tasting room at a massive live-edge red oak table. Then there were snacks and a break before we headed into the bar.

The bar was set up with everything we needed at each spot with some things shared between two or three of the spots, such as bottles of the rye whiskey and atomizers filled with Copper & Kings absinthe. The cocktail we were making was a Sazerac, which was invented in New Orleans at the Roosevelt Hotel Bar and has since become a classic whiskey cocktail.

Alex Staub, the cocktail specialist who taught our class, gave us a bit of history about the cocktail before we got started. One of the things that has remained completely unchanged about this cocktail over time is the use of Peychaud’s bitters, a New Orleans recipe invented by Antoine Peychaud that has lasted since before Prohibition.

We each poured our Angel’s Envy rye whiskey, simple syrup, and Peychaud’s bitters into our mixing glasses, topped with ice, and learned the proper stirring technique. We misted our chilled glasses with the Copper & Kings absinthe and used our Hawthorne strainers to pour the cocktails into the glasses before finally enjoying them in good company.

As simple as a Sazerac cocktail is, I’ve always been too intimidated to try to make one myself. Learning just how easy it could be was a great thing. And while Sazerac cocktails sometimes can have a bitterness that limits me to only having them at the Roosevelt Hotel in New Orleans typically, the sweetness of the rum finished rye made it quite enjoyable.

Distillery bars are a great and versatile thing as places to have a drink or to learn how to make them. There are cocktail classes at Angel’s Envy almost weekly, and it’s a great addition to a standard tour if you want to learn something a bit more practical while you’re there. Check out more Angel’s Envy Cocktail classes here.

Absinthe for rinsing the glass (or in an atomizer)

Combine rye, simple syrup, and bitters in a mixing glass with ice. Stir well. Rinse or spray absinthe in a chilled glass. Strain the cocktail into the glass and express a lemon peel over top. Run the lemon peel around the rim of the glass and drop it in. Enjoy!