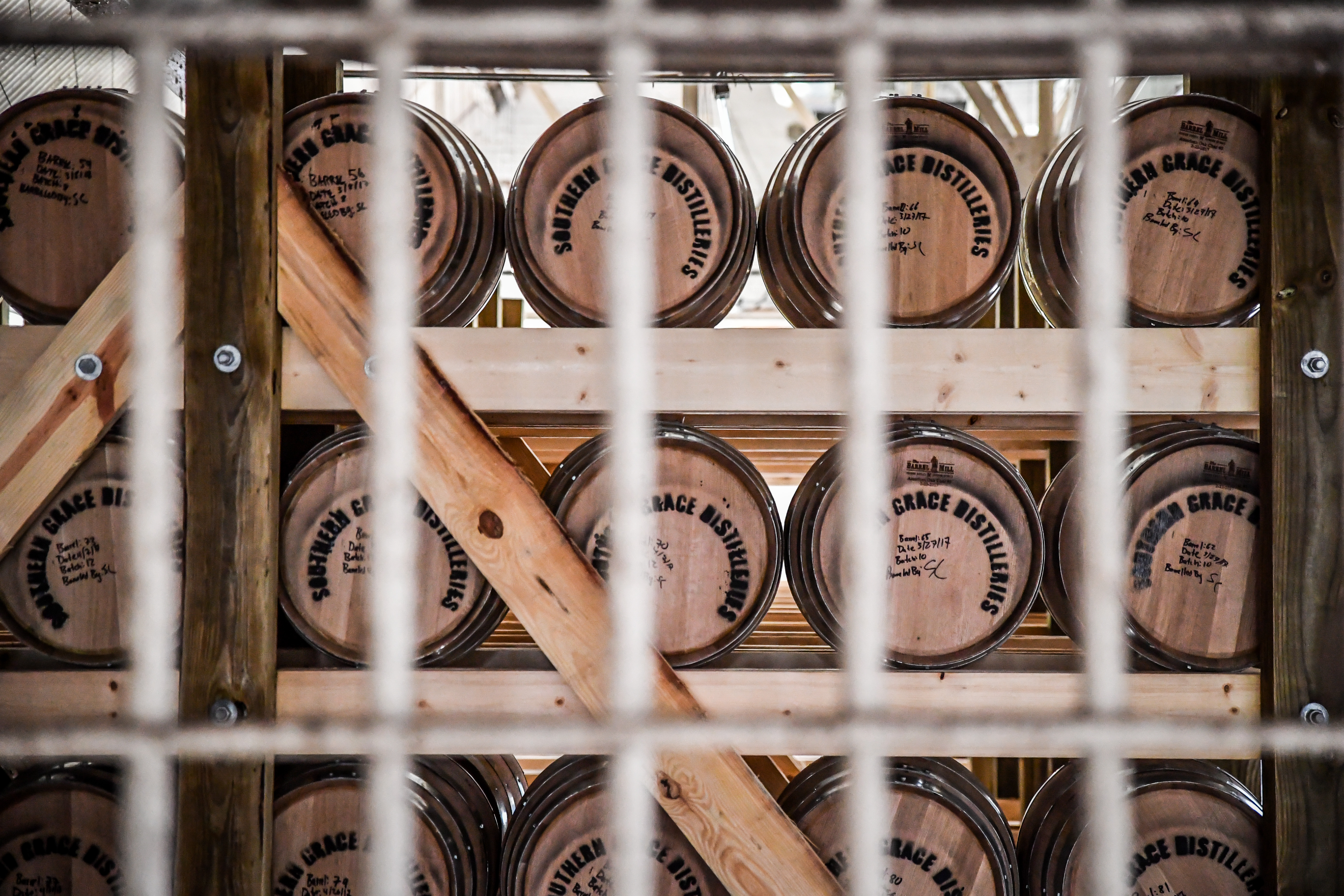 Our whiskey duo end up in the slammer

Acting on whispered rumors that a North Carolina jail was making whiskey, American Whiskey Magazine’s intrepid sleuths, ever thirsty as the Sahara sands, set out to investigate.

The jail is in Mount Pleasant, 30 miles east of Charlotte, a rural hamlet surrounded by rolling woodlands, where, past the town cemetery a tall chain-link fence encircles the Carrabus (County) Correctional Facility.

Built in 1929 the barracks-like complex held low security inmates until closing in 2011. Today it basks in newfound notoriety as America’s only “Whiskey Prison” – AKA Southern Grace Distilleries.

We’re met by Leanne Powell, gregarious founder, president and CEO, who greets us with “Welcome to our jail!” while unlocking a padlocked gate and relating how a prison became a thriving small business distillery, built on family talent and hometown values.

“In 2014 the property lay idle, and while a bit spooky, it had lots of building and space, cells included. A jail, housing a distillery? I thought, what fun!

“At a crossroads in my 27 years in politics, I wanted a real job, something new. I really wanted to make something. I realized that Bourbon is one of the few things that (by law) must be made in the USA, and figured if we could make a good product, we could create jobs that would never be sent abroad. My co-founder, Thomas Thacker and I were Bourbon fans; he too wanted to make Bourbon.”

Given her colorful family history, it’s a small wonder Powell followed a path to distilling. “On my mama’s side bootlegging goes back five generations. My earliest memory of moonshine was of my Daddy, when he and friends would make whiskey, for ‘medicinal purposes,’ occasionally giving some to me, with candy in it. The ‘cure for anything that might ail you’.”

Like many Southern states, North Carolina had already gone ‘bone dry’ in 1908, way before the Volstead Act and Prohibition farce of 1919.

As one North Carolina newspaper told a visiting reporter, “I reckon we’re what you’d call drinking prohibitionists. This paper, for instance, is dry in policy and principle, but,” and here he pulled a bottle from his desk, “how about joining me in a little shot
of corn?”

History records Captain Swift Galloway’s 1907 rant against NC prohibition, “…which like swine flu, came here from the Puritans who landed at Plymouth Rock, who first got on their knees and then on the aborigines. I sometimes feel like wishing that instead of their landing on Plymouth Rock, Plymouth Rock had landed on them.”

Recovering from jolly laughter, Powell continues, “During the 1990s, while I worked at the White House in the office of the US Secretary of Agriculture, I’d often bring local-made moonshine to my co-workers, perhaps  in a strange way to get the respect of my mostly older male co-workers, but it got me in many doors!”

Her busy distillery lies not far from Gold Hill, site of America’s first gold strike in 1799. A plethora of gold mines followed, attracting legions of miners, mostly under the direction of Englishmen, historically noted as enthusiasts of taverns.

“My great, great, great grandfather Matthew Moyle sailed from Cornwall, a six-week sea voyage then, to manage one of the mines, by then the region had 26 saloons and he owned at least one. Later taking to distilling, Moyle kept busy making whiskey for his saloons. “Sadly, after tippling more than was wise, he fell to his death down a mine shaft! His body lies buried in the town cemetery, between his wife – and Eliza, concubine of Matthew Moyle, as their gravestone confirms.

“Subsequent generations passed distilling skills down to my great-grandfather, who employed my grandfather, Jack, an enterprising moonshiner during Prohibition, using his earnings to put himself through barber school. That’s when our family went legal… today I’m making whiskey near to where my English ancestors settled, how cool is that?

The mash room boasts a diminutive copper still, assorted pipes, catch basin etc., right rustic distilling paraphernalia, like you could have found back in the day burbling in secret at clandestine stills.

“True, any backwoods moonshiner could walk in here, and they’d feel right at home!” quips Correa, busy checking white spirit flowing from a drip pipe. Flicking a
forefinger through the stream I taste, “160 proof,” I guess.

“More like 130” Correa winks, continuing his informative spiel to a spell-bound gaggle of wide-eyed visitors.

The sadistic ‘hot box” stands separate.Think Alec Guinness in The Bridge on the River Kwai. The last solitary confinement hell-hole preserved in America, today enlisted as a tranquil barrel-aging room.

In the relaxing souvenir and tasting room, we’re about to blind taste whiskeys, Powell smiles agreeably as, from jacket pockets, I produced two tasting glasses, “I do like a man who carries his own Glencairn!”.

Next we sample appropriately named CONVICTION whose label reads: “Hand-Crafted Small Batch Bourbon” – first whiskey ever aged behind bars – mash bill 88 per cent corn and 12 per cent malted barley. Craft distilled here at Whiskey Prison, aged behind bars in our ‘old dorm’, barreled at 100 proof, bottled at cask strength. Every label boasts handwritten proof, barrel numbers, bottle number and date bottled. Our Bourbons have a sweet finish – hard time, been reformed and refined to smooth out any rough edges.”

A delightful Bourbon taken straight, or as an exciting cocktail base.

We enjoyed Southern Grace Distillery; where else can one haunt an old-time lock-up, swap tales of family moonshiners and sample a superb Bourbon, and behind bars as well?

The Whiskey Prison attracts upwards of 550 visitors per month. “Folks coming from all over the country, international too, making the old jail a thriving tourist destination, putting our little town on the map, bringing jobs back home.”

Tragically Leanne Powell passed away on July 12th 2019, Thanks to her dedicated staff, her legions of admirers, her beloved distillery will carry on.

Before becoming a distiller Powell worked as chief of staff for US Rep. Larry Kissell and, leaning on that experience, was a leader in reforming the way North Carolina governs alcohol. Powell, also a master marketer, brilliant creator and innovator, began in politics as an intern in 1984 and by 1988 had a full-time job among lawmakers.

Before Leanne suffered a fatal stroke, North Carolina Governor Roy Cooper scheduled a fundraiser at the distillery. During his visit, Cooper honored her with The Order of the Long Leaf Pine.

“If anyone deserves to be part of the highest honorary society in the state of North Carolina, it’s Leanne Powell,” Governor Cooper said. “My friend Leanne Powell made a real difference in the lives of North Carolinians with her passion, courage and innovative spirit. She was loved by so many people and her loss are deeply felt by all of us.”

(Following a first taste of Conviction Bourbon Governor Cooper confided to staff “You’re going to make a lot of money!”)

North Carolina author John Francis Trump (no relation to-you-know-who) gave AWM permission to quote from his touching tribute to Leanne,“Powell, as I was writing “Still & Barrel,” says she often daydreams about taking a telescope to a watch tower at the prison and just staring at the stars. Well, she doesn’t have to climb a tower anymore. The stars are now much closer, because she is among them.”