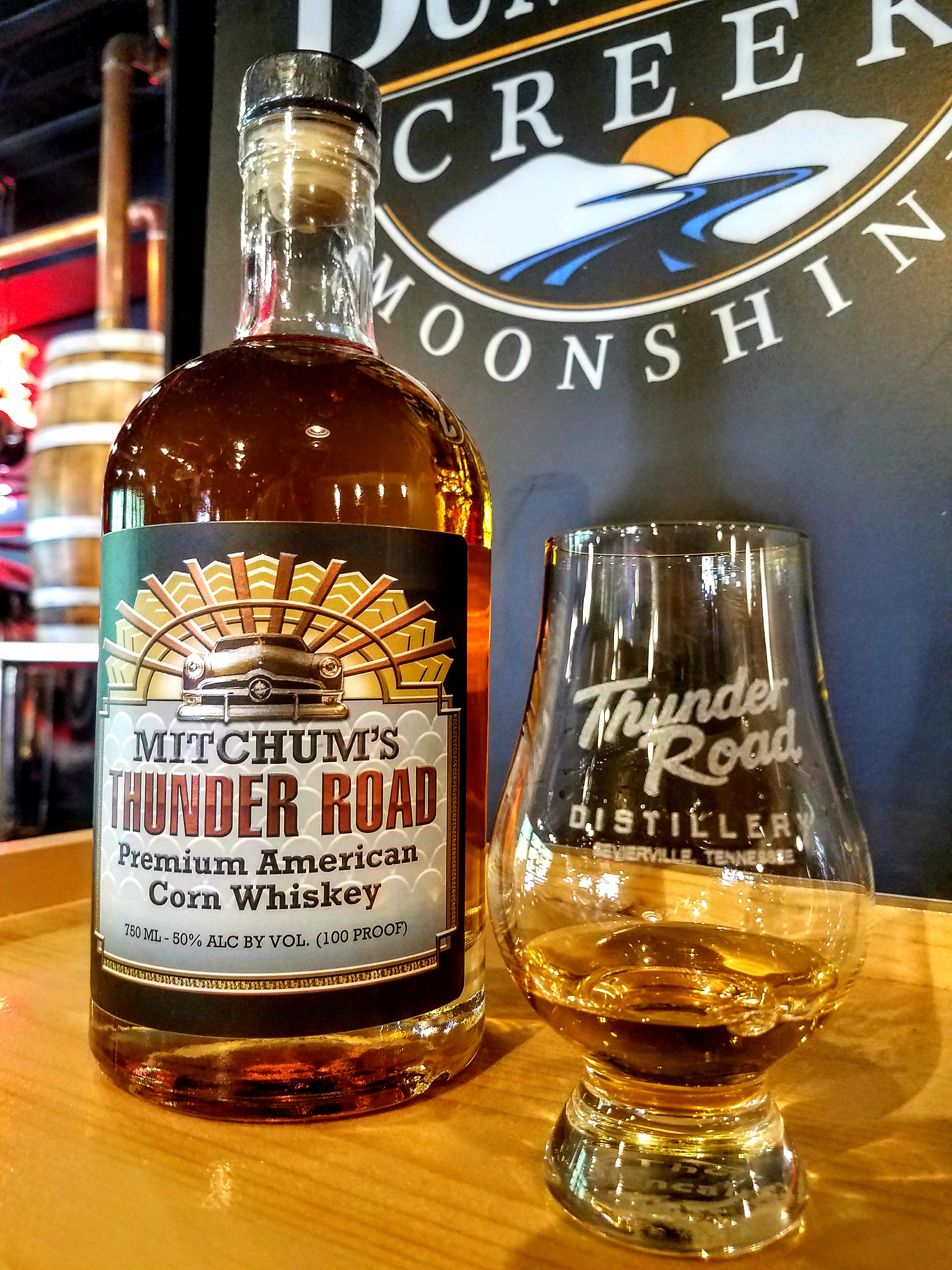 Tales of the moonshiners behind the famous film

I remember seeing the film years ago at Sunset Drive-In (AKA the Passion Pit) in Hudson, New York, my arm around a girl, snuggling in my red and white 1957 Ford Fairlane, identical to those tuned-up Fords screaming by on the big screen! Talk about audience participation, so caught up in chase scenes, hell, I’m actually hitting the brakes! How cool is that?

I spotted Mitchum’s Distillery billboard during a 700-mile road trip. Ready for a break, I pull off the soulless interstate and park below the sole shady tree by the distillery; open on Sundays and in the Bible Belt? Lesser enlightened State Liquor Boards take note.

I smile, spotting a tee-shirt which reads: You look like I could use a shot of whiskey! How many pals I could send that to! Instead, I opt for a dark gray one featuring the ‘49 Ford. I had to buy that one.

An old likker song pops into my mind, “Son, his daddy told him, make this run your last. The tank is filled with hundred-proof, you’re all tuned up and gassed. Now, don’t take any chances, if you can’t get through. I’d rather have you back again than all that mountain dew.”

I meander over to the handsome tasting bar where distillery president, Kent Merritt greets me, explaining he, too, is an avid fan of the old movie. In fact, he ventured into making his definitive corn whiskey as a tribute to Robert Mitchum. “I’ve loved that film since I first saw it, so true to the real-life adventures of those good ol’ boys who made the stuff and ran those hot cars on roads not far from where we’re standing.”

A framed newspaper clip boasts a story of long-dead moonshiner Rufus Gunter, suggesting he was the inspiration for Mitchum’s epic movie.

Intrigued by the tale, I track down Mitchum’s son, Jim, in Arizona; he played his dad’s character’s brother in the movie, and I ask him about Gunter.

“I can’t recall (Gunter) for sure, it being so long ago,” he says. “I think my dad was simply paying tribute to all moonshiners, men who had strong beliefs and lived their lives the way they wanted to.

In 1957 my father asked me to appear with him in the movie. We went to Ashville, North Carolina to begin filming. During that time, I met many fiercely independent folks who viewed making moonshine as an expression of American independence and freedom.”

Every Christmas for years thereafter, a supply of moonshine mysteriously arrived at the Mitchum home, a grateful token from distillers they’d befriended and came to know.

Happily, I knew someone else who might shed light on the Gunter myth, local historian and author Kate Clabough, who’d researched the back story extensively. I call Kate, who chides me, having her sift through her copious files.

“I haven’t thought about Thunder Road in a long time and now it’s running around the edges of my brain again,” she laughs. “I blame you, you know…

“Gunter didn’t die in a fiery crash. In fact, it was just the opposite. He died when his car went off the road into the Tennessee River on Christmas Eve 1955. His body wasn’t found until February 12, 1956. He was just 28 years old.

Although Jim (Mitchum) said his dad didn’t base his character on one particular guy, I have to wonder why more than one person told me it was Rufus Gunter. Why the story about his dad refusing to allow Mitchum to use him but mom ‘signed a paper.’ As with all stories, there is a relevant kernel of truth in there somewhere. The trick is figuring out what it is.

We rehash yarns about long bandied rumors and wannabe legends, lies that take on a life of their own. Still, questions remain.

This movie popularized the Gunter tales, many southerners laid claim to the legend, and it became something of a storytelling tradition.

“As the Thunder Road tale passed through generations, its tellers, basking in reflected glory, adapted the account to include their friends and family and came to regard each story of a local moonshiner’s run-in with the law as he being “the” inspiration for Thunder Road.”

Kate remembers one quirky character, to put it mildly. “He had worked for the local gas company but was as East Tennessee hick as they come. He made moonshine on his property and whenever he had a tooth rot; he’d liquor up and pull it out himself.”

The moniker ‘Thunder Road’ was the code name assigned to the undercover federal operation to nab moonshiners, but to locals its meaning was no secret. In the Appalachian foothills, Thunder Road was a term coined to identify the night time route from Harlan, Kentucky, to Knoxville, Tennessee, throughout North Carolina too, traveled by illegal whiskey haulers; routes that spawned Robert Mitchum’s 1958 Hollywood hit Thunder Road – and his memorable song The Ballad of Thunder Road:

“And there was thunder, thunder over Thunder Road. Thunder was his engine, and white lightnin’ was his load. There was moonshine, moonshine to quench the devil’s thirst. The law they swore they’d get him, but the devil got him first.”

Kate continues, “But, to the men who traveled the route, it was much more than legend. It was the road to freedom from economic despair.”

About the spectacular cult class of the Moonshine Wars of the 40s and 50s, one commentator writes, “THUNDER ROAD opens with a bang! A bumper snatcher (Government car that rips back bumpers off the cars they chase) grabs the plate of the hot rod belonging to the most sought-after moonshiner in the business, Lucas Doolin. Doolin is probably the coolest Robert Mitchum performance. With his sleepy eyes, he slaps around the rival moonshiners, basically tells them ATF boys they’ll never get him, and tries to talks his young brother (Played by Mitchum’s 17-year-old son Jim) away from the moon business.

The film has real charm too, basically because the film never sneers at the hillbilly culture it depicts. Reportedly the drive-in classic of the 60s, and I can see why.

I grab a random bottle from the neatly stacked shelf, cut the plastic seal, uncork gently, then pour a sufficient splash into a brand embossed Glencairn, then swish around against the light; pleasing golden honey color. Aroma; enticing caramel nose, hints of slightly smoked corn and vanilla, Taste; appreciably long smooth, delicate almost, with the finish accompanied by heat, warming the cockles of the heart.

Indeed, a fitting tribute to Mitchum and folks it honors, both men and women who knew how to make great moonshine.

Bottle’s back label reads, “The whisky in this bottle represents that spirit and is my effort to carry on more than 300 years of tradition.” – Jim Mitchum

Back home I pour a generous dram, pop the Thunder Road dvd into the player, kick back the recliner. Over a conservative sip I’m transported, back to that romantic drive-in… all those muscle cars I wished I’d kept, wondering who yon girl was and what’s she doing today? Sigh. By the second dram, I’m too immersed in the movie to care.

0 comments on “Honoring the Legends”