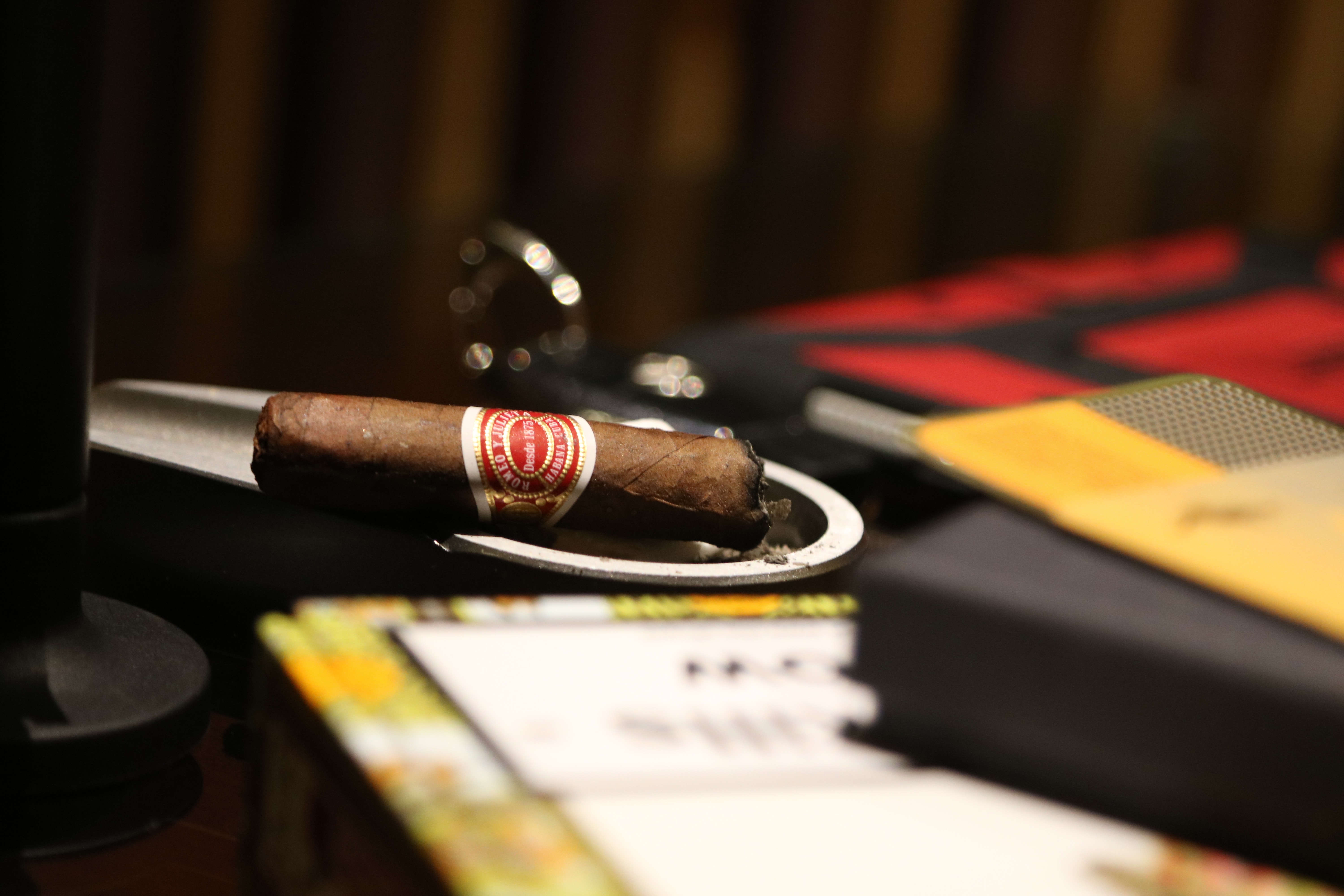 The best way to keep track of what you are smoking

Do you remember the best thing you ate last month? Can you describe it in detail to a server in a restaurant so they can recommend something similar? The fact of the matter is, while you may remember that you liked it, the details have likely already faded away. It’s the same with whiskeys and with cigars, and especially so when you pair the two. You may remember your favorite whiskey or your favorite cigar, but you might have a difficult time recalling the particular details of either unless you are paying close attention to the flavor profile and partaking on a regular basis. This is why it is so important to keep a cigar journal, you want to be able to remember not just what you like, but also why you liked it.

For cigars by themselves, many people like to try different things. But when it comes time to describe that cigar you had one time that you really loved, I think it was Nicaraguan? Often the name of the cigar hasn’t even stuck. That’s why keeping a cigar journal is a crucial step in your cigar journey.

“For me, it was about trying to keep track of what I preferred, my personal opinion,” says Paul Heavrin, assistant manager at J. Shepherd Cigars in Louisville, Kentucky. “I also like to keep notes about new things I try so I can make recommendations about whether to bring it in the shop. But mainly I like to see what cigars I prefer over others because there are just so many out there now.”

“If you like a cigar, you can go back in your notes,” says Heavrin. “I grade them one to five. You can give a lower rated cigar a second chance and see if you still feel the same later, or you can take those notes to a tobacconist for a recommendation on something else along the same lines, either to try something new or if they don’t carry your favorite cigar.”

So what do you write down? “Write down the strength of the cigar, mild, medium, full, the size of the cigar, and things like that,” he continued.

“You can even buy journals online for this. I like to record the three stages: the initial light up, then another for the halfway point, then a final note toward the end of the cigar. The purpose here is to keep track of how the cigar changes as you go.”

“I also try to taste the flavors in the cigar and how those change with each stage. It’s also nice to write down the tasting notes on the dry draw before you light it up to see how the tobacco tastes before it’s lit. Sometimes I will make notes on the construction of the cigar, how well it burns, and how it appears.”

Keeping a cigar journal is an important part of the cigar smoking process, particularly if you are going to pair your cigars with whiskeys. This adds another level of complication, and detailed notes can help you sort out what you liked and why long after you’ve moved on.

One of the most iconic cigar shops in the world, the Nat Sherman Townhouse, is between Bryant Park and Grand Central Terminal and is adorned with a clock atop its sign, which is also emblazoned with the declaration ‘Tobacconist to the World.’ Once inside, expect a level of service that includes a personal shopper. There’s no wandering aimlessly around the massive, well-stocked humidor here, your personal shopper will carry a tray and attend to your shopping experience, making personalized recommendations, the whole time you are in the humidor. Outside the humidor there is a great selection of tobacco accessories such as cutters, lighters, and humidors. There used to be comfortable chairs for lounging, but they were replaced with smaller and more utilitarian chairs upon reopening after a merger. Regardless, this is still a great place in Manhattan to take a break for the day and have a top-notch cigar shopping experience.

La Gloria Cubana has a long and storied history starting in Cuba and eventually being made at the Partagas factory and then branching off to include a separate non-Cuban line with the same name that has been produced in Miami, the Dominican Republic, and Nicaragua. This cigar is made in Esteli, Nicaragua and is a Nicaraguan Puro, which means all the tobacco in the cigar comes from Nicaragua. There is a very spicy pepper note on first light which mellows slightly in the first third. There are also notes of creamy leather. Together with the Virginia-distilled Bare Knuckle Bourbon, the Bourbon brings out toasty walnut flavors in the smoke, while the smoke brings out a strong sensation of orange creamsicle in the cigar. This was an unexpectedly flavorful pairing, almost as though this cigar was made for this Bourbon.

JRE Tobacco is a family business that includes a tobacco farm, somewhat akin to the many craft distilleries that have been started by farming families throughout the United States during the craft distilling boom, which gives these producers greater access and control when it comes to their tobacco. This full-bodied, box-pressed corona gorda is made in Honduras and has a San Andres Maduro wrapper, while both the binder and filler tobaccos are from Honduras. Company founder Julio R. Eiroa does the blending for this cigar. It was heavily spicy upon first light, but it mellowed to a slight spice with earthy notes after about five minutes. When paired with the Michter’s, the cigar brings out a softer mouthfeel in the Bourbon as well as creamy caramel notes, while the Bourbon brings out lovely cedar notes in the cigar.

Boasting Northern Michigan’s largest humidor, Nolan’s Cigar Bar is located right in the heart of downtown Traverse City, a summertime destination for those wanting to enjoy everything from film festivals to a cherry blossom festival. The humidor features many popular brands including Ashton, Padron, Arturo Fuente, and Drew Estate. Just outside of the humidor is a small sitting area for customers to enjoy their purchases while looking out on the cherry-tree-lined street. Down a corridor you’ll find the cigar bar with a decent cigar menu and televisions on the walls to watch all the sporting events. The house cigar is a collaboration between Nolan’s and the Traverse City Whiskey Co. where Ashton cigars are aged in a used Bourbon barrel to create a unique flavor profile, this is only available in the shop.

Black Label Trading Co. was started in 2013 and opened its own factory in Esteli, Nicaragua in 2015 called ‘Oveja Negra’ or Black Sheep. This producer focuses on very small batches of cigars. This often makes them difficult to find, but means that most of this producer’s energy is focused on making those small batches count. Made in Esteli, Nicaragua, this full bodied corona extra cigar features an Ecuadorian Maduro wrapper and binder and filler tobaccos from Ecuador, the United States, and Nicaragua. Upon first light there are notes of bitter espresso balanced with semi-sweet chocolate notes. When paired with the whiskey, the cigar brings out lovely sweet, spicy cinnamon candy notes in the whiskey, while the whiskey mellows the bitter espresso to a more earthy coffee profile.

Willy Herrera was the master blender at el Titan de Bronze cigar factory in Miami, Florida before being hired on at Drew Estate in 2011 and being named master blender in 2014. Herrera Esteli was released in 2013 and has grown to include Herrera Esteli Norteño, Herrera Esteli Brazilian Maduro, and Herrera Esteli Miami. The wrapper is Ecuadorian Maduro, the binder is Ecuadorian Sumatra, and the fillers are from Nicaragua and the Dominican Republic. There are a lot of complex flavors upon first light, ranging from bold pepper to bitter chocolate to earthy coffee. When paired with the Four Roses Small Batch Select, the cigar brings out a buttery mouthfeel and sweet plum notes in the Bourbon, while the Bourbon brings out cedar notes in the cigar and balances out those peppery edges.