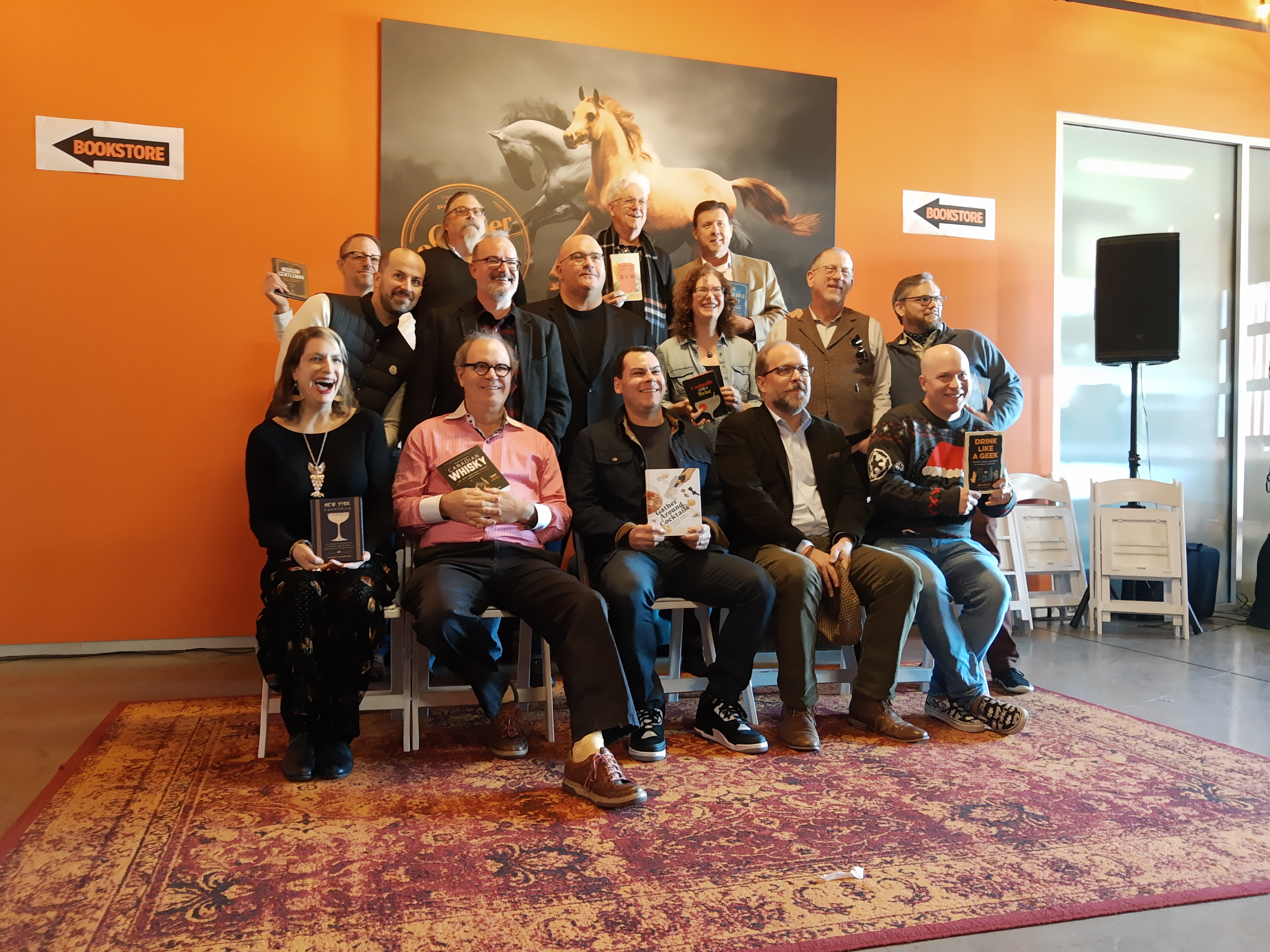 On December 6th and 7th in Louisville, cocktail and spirits writers from across the country converged on Copper & Kings American Brandy Distillery in what is sure to be the first of many Bookstock events. Paul Clarke of Imbibe Magazine hosted the discussion sessions, of which three were on Friday and two on Saturday. Attendees had the opportunity to purchase books from the book store and have them signed by 16 different authors.

The first session was called “Drinking Directions: The State of the Cocktail Today” and the panel guests were The Martini Cocktail author  Robert Simonson and Wine Enthusiast Spirits Editor Kara Newman. The duo discussed the trend of non-alcoholic cocktails, or mocktails, including the trend of alcohol-free bars and spirits. There is much debate among spirits writers about whether this is something that should be covered by spirits writers or food writers, in spirits publications or in food publications. There was discussion about the cocktail renaissance bringing back fresh juices and well-made cocktails and the phenomenon of being able to get a good cocktail just about anywhere now. Finally, there was discussion of the extremely popular Miracle Popup Bar concept, which has turned into a franchise of sorts complete with a manual for bars to make the transformation for the holidays and monetize it, according to Newman. Simonson reported that Miracle Bars are helping bars struggling with a sales slump to get over the hump, and also that the cocktails are usually good.

The second session was Straight vs. Blend: The Ultimate North American Whisk(e)y Conversation with Bourbon Women and Bourbon Curious author Fred Minnick and Canadian Whiskey author Davin De Kergommeaux. The two had a veritable comedy session about the common misperceptions about Canadian whiskey, including the fact that many Canadian distilleries made bourbon for American companies during Prohibition.

The third session was Looking for Drinks in All the Wrong Places with Cocktail Historian and all-around guru David Wondrich and And A Bottle Of Rum author Wayne Curtis. It was a lively discussion that included much about what we can learn about today’s drinks and drinking culture from history and what we can learn about historical drinking culture from archaeology. Curtis shared a story of an archaeologist who found multiple sizes of punch bowls on a dig and the conclusion that punch was taken so seriously every occasion would have had its own special punch bowl. There was also discussion in this context of the change over time from drinking being a communal activity to eventually more of a singular and even solitary one. Wondrich shared a story of finding a cocktail recipe for a ‘Three Miller’ cocktail and how when he discovered it was a typo of ‘Three Miler’ it lost its enigmatic appeal.

The fourth session, held on Saturday, was The 10 Most Important Cocktails & Spirits Books of All Time with The PDT Cocktail Book author Jim Meehan and The Art of Amerian Whiskey author Noah Rothbaum. The pair discussed their picks for the top ten most influential or important cocktail books, starting generations ago and working forward in time. Meehan began the discussion with a caveat, namely that it is important to take into account bias in top ten lists and ask yourself who is writing it and why. Of particular interest was Rothbaum’s sixth choice, Old Mr. Boston, as it served to popularize cocktails in his opinion. Meehan agreed that it was like the telephone book of cocktails in the 1990s, on every back bar. Interestingly, Sazerac put together the Mr. Boston website, which shows the evolution of certain cocktails over time. Another interesting side conversation was whether bartenders should attempt to copyright their cocktail recipes and whether they should charge people to publish them. According to author Philip Greene, who is also an attorney, recipes are a collection of facts and you can’t copyright facts, though you could copyright a cocktail name.

The final session was A Sense of Time and Place with New York Cocktails author Amanda Schuster and A Drinkable Feast author (and attorney mentioned above) Philip Greene. Each has written cocktail books based on iconic locations such as New York and Paris and has worked hard to capture the unique stories and circumstances of their respective places. Paul Clarke referred to this type of writing as a sort of “cultural seedbank.”

For true cocktail nerds, this was the fan convention to beat all fan conventions. Bartenders, spirits producers, and cocktail wonks from across the country were in attendance to meet and learn from their favorite authors. The only problem for next year? We’re going to need a bigger punch bowl.