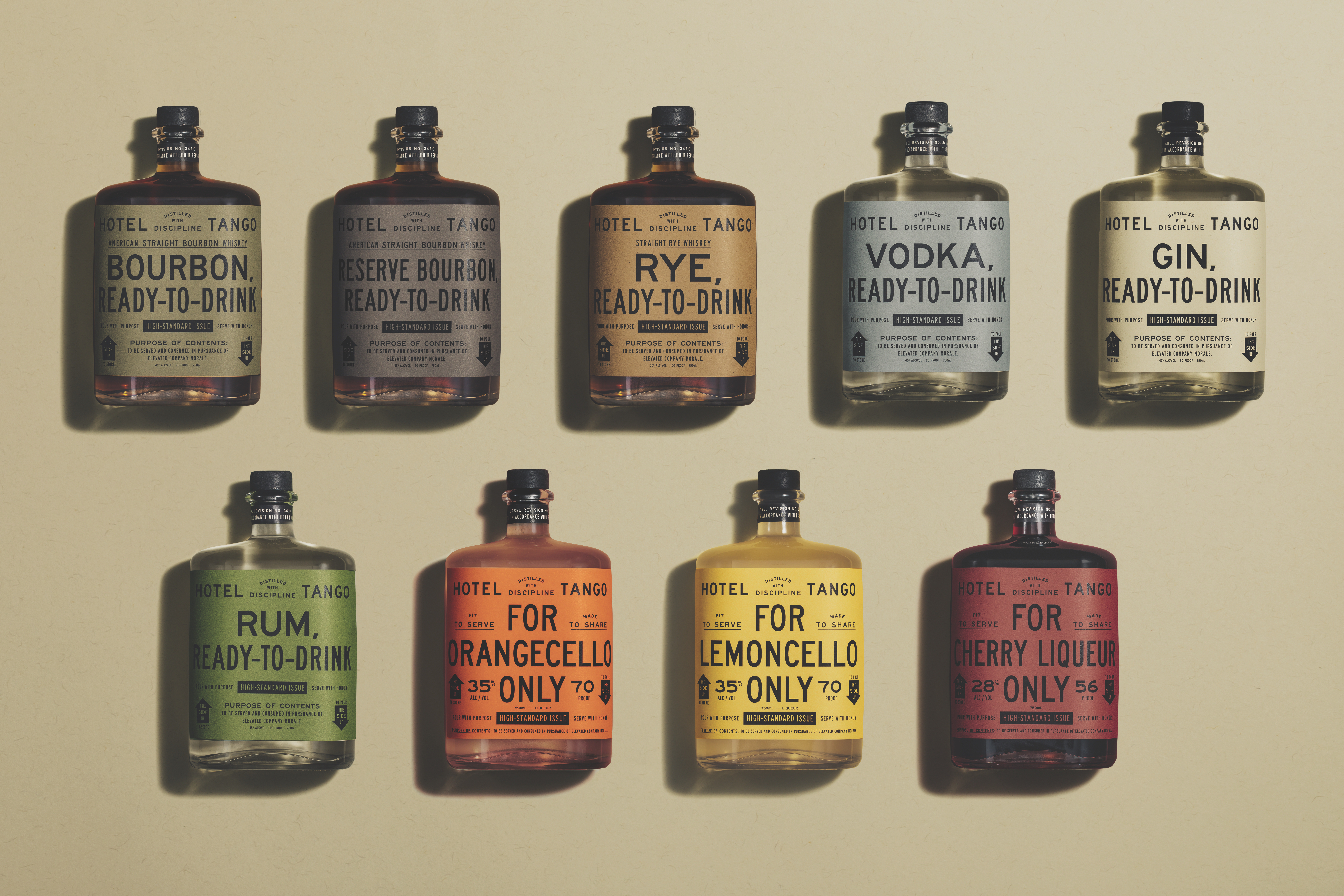 Taking military precision to the masses with Hotel Tango

I do not care for gin; it’s not surprising for a Bourbon woman to say this due to my deep roots in Kentucky. However, I pride myself on being the ‘equal opportunity drinker’, yet gin was evading me until several years ago.

At the time, I was participating as a judge during a blind tasting contest in Indiana when the facilitator announced that it was time to do a gin flight. Quickly I retorted that I was only there for the brown spirits contest, but my “no thank you” did not seem to resonate and a tray of gin flights was delicately set in front of me. Begrudgingly, I nosed and sipped and my expectation was solidified by my dislike, until I came across the last sample. I nosed and nosed again.

Interesting, there were fresh, aromatic, wild citrus notes, a cool and pleasant warmth with a herbaceous note that made me reach for another sip. This was a breakthrough… I don’t like gin! I played it cool and waited until the unveiling to find it was made by a small Indiana craft distillery that beat other products like Beefeater and Tanqueray. Hotel Tango was the brand and so began my infatuation not only with the name, but the story of the family behind the spirits.

Truthfully, I asked where is the hotel located that makes this product?  I was then told that they were indeed not a hotel, but a name is based on the NATO phonetic alphabet – Hotel for Hilary, Tango for Travis, the owners of the brand.  Sometimes brands stay on my radar for a while. Curious, I knew one day I would make the visit to see the actual distillery operation – I have quite a list, you know. Fast forward, a few years later when their portfolio expanded, I was able to fully engage and understand the meaning and frankly the spirit of the man behind the Hotel Tango brand.

Authenticity is everything to me when I meet craft distillers and when Travis Barnes walked in with his shirt that read, ‘Distilled with Discipline’, I knew he was the owner. His roots and inspiration come from a military background as a Recon Marine; Barnes was a part of the first reconnaissance battalion, sent to Iraq after the events of 9/11. During that time, the battalion gained a nickname from the Taliban – The Black Diamonds. The new Hotel Tango logo plays on that story and the military font, which incorporates a stenciled ‘H’ and ‘T’ for Hotel Tango. Just five years ago, when they first opened up the doors, it became the first combat-disabled, veteran-owned distillery in the U.S. and Indy’s first artisan facility since Prohibition.

Bad grades and a bad economy led Travis to the military. After his service to our country, he went back to finish college and played around with a backyard still, as he had always had an engineering and scientific mind. Eventually, he was one of only four distillers to receive his federal license when the distilling industry was getting its start
in Indiana.

When they opened in an 1880s building that originally was used for making bank furniture, yes, there was such a thing, Travis and his wife Hilary (who serves as the chief legal officer) launched Hotel Tango with the encouragement of friends in 2014 to honor Travis’ military service. He has since led with an exacting and intentional goal, “…To have every consumer think his spirits are better than most large brands.”

Spirits that are fit to serve – and made to share

Surrounding themselves with exceptional people at every level, including a former Navy chief as their director of military relations, they focused on crafting equally exceptional spirits – with the same grit and determination he was trained for in the military. Their spirits portfolio reflects Travis’ exacting standards. Spirits that are fit to serve – and made to share. These messaging pillars build a foundation for the brand, staked in militaristic practice but with an air of playfulness that can resonate with everyday consumers, veterans and active military members alike.

Bobby Yates, who sits at the helm as head distiller, came from the beer industry. Rich in experience and enthusiastic on all things innovative, Bobby displays the personality and ethos of the brand. As we walked through the distillery where it was clear from his fascination and obsession for cleanliness and yeast strain integration, Bobby shared unique perspectives on some of the production qualities that make Hotel Tango spirits a standout. Qualities such as the way their rum uses wild fermentation from Norwegian strains and selected beer yeasts from Indiana. They produce every cocktail mixer used in the tasting room and hand label each and every bottle.

Located in the historic Fletcher Place neighborhood of downtown Indianapolis, Hotel Tango operates a tasting room where customers can sample spirits and enjoy innovative cocktails. The distillery’s tasting room and cocktail program grew in popularity, sales for the brand’s expanding line of spirits took off in civilian states like Michigan, Ohio, Texas, Wisconsin and its hometown of Indiana. Not surprisingly, Hotel Tango is also available in more than 75 military bases across the U.S.

Consumers will notice eye-catching phrases and taglines, all of which represent the expression of the brand through the military lens. M.R.E.’s (meal ready-to-eat) served as the central focus for the packaging creative. Each Hotel Tango spirit carries the same type of descriptors and directives as an M.R.E. since each product is prepared and produced for immediate consumption. The nuanced details on the labels communicate key product information but tie back to the military-driven mindset Barnes brought to the business five years ago.

Travis and Hilary continue their service to our nation by aligning themselves with strategic partnerships that have strong roots in the local community as well as working further afield.

HVAF (Helping Veterans and Their Families)

Hotel Tango has had a partnership with HVAF since the company’s inception and orchestrates the annual Operation Alpha event that benefits HVAF.

Hotel Tango Farms is the sustainability-focused arm of the distillery, growing produce for usage in its craft cocktails. Indy Urban Acres grows flowers at the farm to sell at retail, in order to support its mission of empowering and educating people through high quality products.

My contentious gin journey led me to the discovery of an amazing team at Hotel Tango. There is deep meaning in its clever packaging, heart in its innovation and discipline in its production with every sip you take and I respect that. Travis’ story, his moral code and the lessons he gleaned during his time as a Recon Marine. That is truly where the basis for this brand was born.

0 comments on “Distilled with discipline”