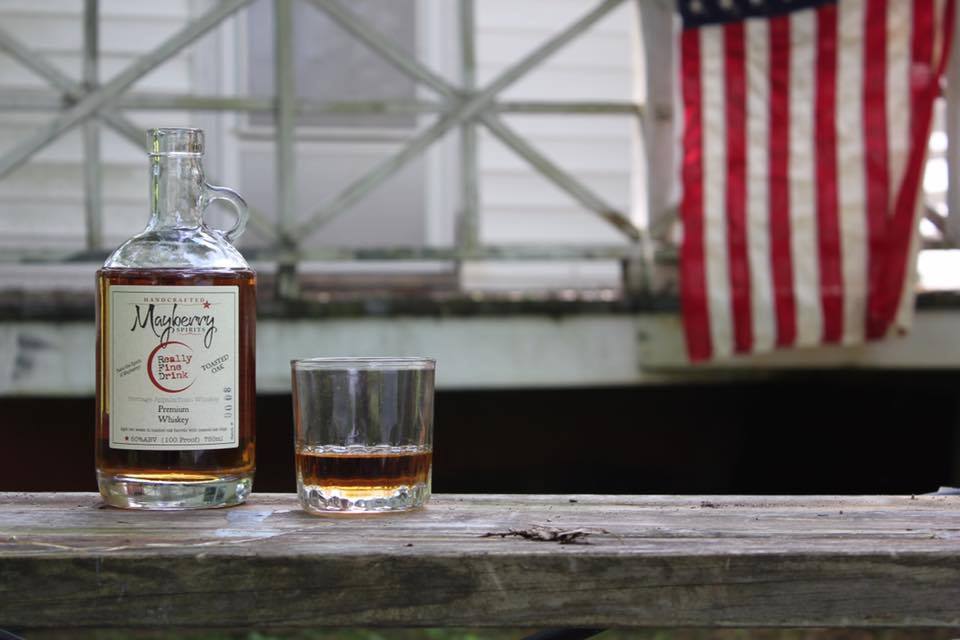 From Gregorian chants to mash bills, Mayberry Spirits is home to one extraordinary distiller

Leading into our latest American Whiskey Magazine adventure, here’s an excerpt from a poem of old; thought provoking, poignant, never timelier – hometown hero, Andy Griffith himself might well have penned – food for thought.

But first, a word about America’s favorite TV show and a downright friendly town that inspired it.

We’ve covered Andy’s colorful career for celebrity magazines over the years, writing about his boyhood, early TV and movie career and such.

Again, we find ourselves stepping back in time to Griffith’s imaginary Mayberry, stories set during the 1960’s, with small town themes that often reflected real life local characters and town haunts ever fondly recalled, right here in Mount Airey.

One forgets just how wide, roomy and spacious the 1960’s Ford Galaxy four-door passenger cars are. Its doors are emblazoned with Mayberry Sheriff gold stars – just like those featured in The Andy Griffith Show. We happen to be in one, courtesy of Squad Car Tours at Wally’s Service Station. “Ford supplied the show a new patrol car every season” says our driver. “Every car was painted flat black and white so’s not to reflect cameras and arc lights.”

Siren wailing and bubble-gum-style red light flashing, we grind to a halt adjacent to The Snappy Lunch. The menu cover boasts, ‘Mt. Airy’s Oldest Continuous Eating Establishment at The Same Location Since 1923.’ The eatery is featured in an early TV episode, ‘Andy the Matchmaker’ as Sheriff Andy invites Deputy Barney down to The Snappy Lunch to get bite to eat. Decades later Oprah visited too, her much-enjoyed pork chop sandwich is now famous.

Mount Airy’s appealing historic district kind of mimics the fictitious sleepy little town of Mayberry, enjoyed by millions during the hit CBS weekly TV series (1960-1968), whose storylines preached family values, kindness and tolerance. This was all played out in a sort of a small Eden, scripts of which later inspired a ten-week college course.

“We just wanted to entertain, but we were careful,” Griffith told reporter, Tim Funk, during a 1993 interview. “We were very careful with Opie when we did Opie stories, we did father and son stories. Now Opie wasn’t really raised by a single parent because he had Aunt Bee there… I tell you, the show had good morals only because the show was based on love. If you have to say, ‘What was the show about?’ it was about love.”

Aunt Bee Taylor (Frances Bavier) and Thelma Lou (Betty Lynn) – circumspect, yet comic characters, living simpler times we wish we could have shared… when a tweet meant “An imitation of the sound made by a small bird.”

Outside the Andy Griffith Museum a life-size bronze statue depicts Andy and Opie headed for the old fishing hole. Revisiting for Andy Griffith Day, he posed for an iconic statue photograph.

A vast collection of memorabilia gifted by Griffith and cast members awaits inside: Sheriff Andy’s desk, early candlestick telephone, police radio, jail cell mock-up and video show excerpts, but not however a clip of the famous ‘Mayberry moonshine’ episode.

In town again, this time we’re seeking out the distillery aptly named Mayberry Spirts, founded by a 140 MPH motorcyclist, and get this, former monk Vann McCoy.

“You can’t print this but…” says he, exuberantly relating his past life adventures on motorcycles, airplanes and making whiskey. He’d even made moonshine growing up in Mount Airy.

“At 13 I made my first moonshine using my mother’s pressure cooker,” he laughs. “Got some copper tubing, corn meal and sugar with a little spoonful of bread yeast, and went to work. Luckily, I scorched it, it smelled bad, tasted terrible, probably saving teenage me from becoming an early alcoholic.”

Then, “The Big G,” as he calls God, “called me. I quit high school at 16 then headed to Georgia Tech to study astrophysics. Tiring of the stars, I set my sights on the heavens, I joined a contemplative monastery then spent the next 25 years as monk, Gregorian chants, silent scriptoriums, rigid monastic life in Wisconsin, Ireland, Switzerland and Germany’s romantic 12th century Kloster Eberbach Abbey in Germany. “I only visited Eberbach, so I was never a monk there.”

Sean Connery was filming The Name of the Rose, last time Eileen and I explored Eberbach in the mid 1980’s, there we three sipped superb Rheingau wines by candlelight in its Gothic cobweb-draped wine cellars. During after dinner whiskey toasts, Connery reminds us he too rode a Norton motorcycle during his early salad days. Vann’s visit to Kloster Eberbach was many years later.

“So, when I moved back to Mayberry to care for my elderly mother, I brought back to my hometown a little knowledge of distilling that expanded on my teenage moonshining. I like to think that going from monk to moonshine, it’s all about lifting the spirit!”

McCoy’s MacGiver-like genius extends to stunningly assorted home-made innovations, like his $200 washing machine substitute for a $20,000 commercial fermenting drive, and equally innovative 100 per cent water filtered recycling system, not to mention intriguingly handcrafted infusions of costly vanilla bean sugars and the like to wondrously intriguing spirits. Under the sign ‘Our Whiskey Rocks!’ rocking-chairs provide ever so gentle agitation to a brace of toasted oak chip infused barrels. Very cool!

Mayberry Spirits is unique in the whiskey industry by using sorghum grain, as McCoy explains, “The grain is converted into a sorghum honey/syrup through heating and the addition of the malted grain enzyme (Alpha-amylase). This sorghum honey plus water and yeast is the entire recipe for our whiskey. Most whiskies have some bite and burn with a little harshness on the finish. Sorghum whiskey is unusually smooth with a silky mouthfeel and incredibly clean finish.”

0 comments on “Lifting the spirit”