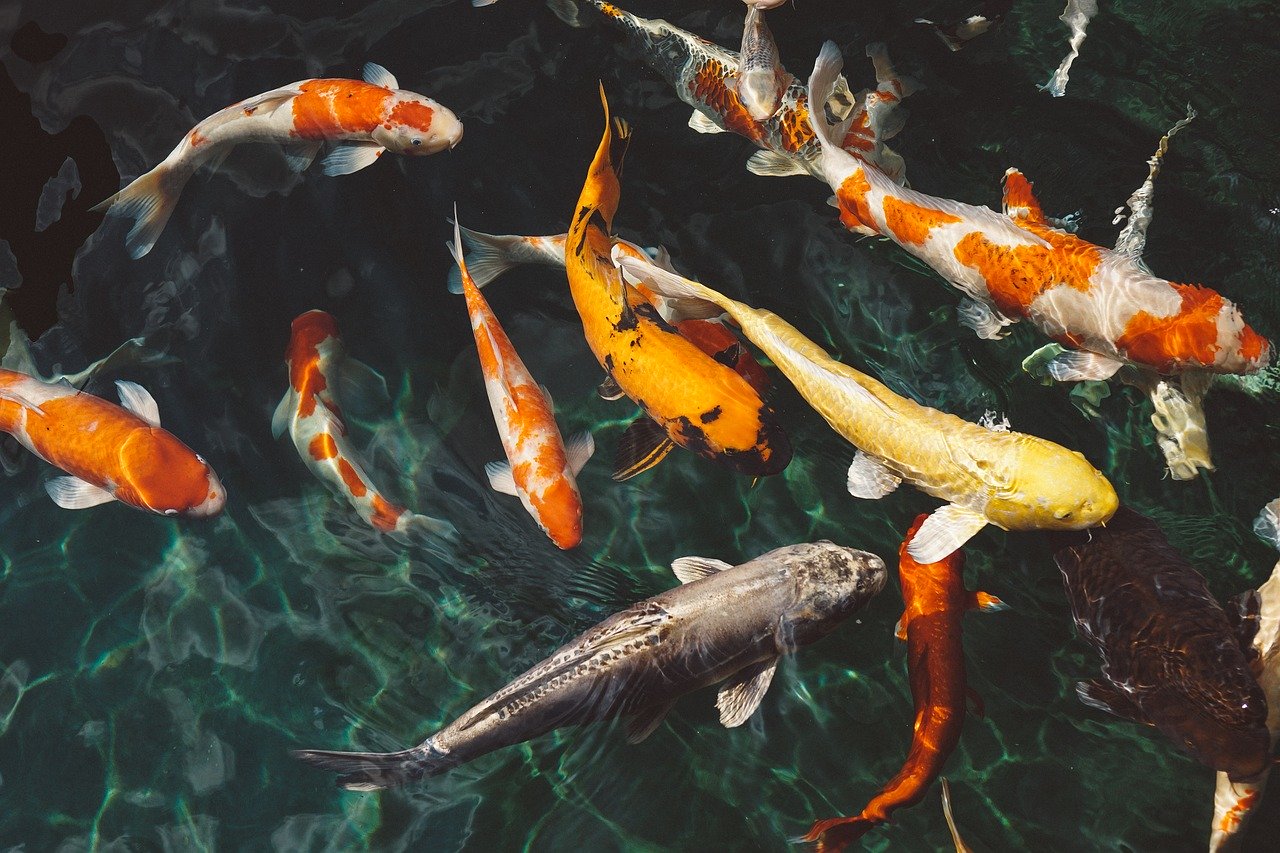 The Bourbon industry in Kentucky went through some difficult times starting in the late 60s and carrying on until the early 90s. The 1980s were especially difficult because people preferred wine and beer, and when they did drink distilled spirits those spirits were usually vodka or rum. It was during this time that some of the greats of the industry were honing their craft. Booker Noe was rumored to have raised catfish in the mashtuns, but he wasn’t the only one experimenting with fish on the distillery grounds. In the late 1980s, Owsley Brown got the idea to sell the spent mash grains as fish food while he was feeding the koi in his pond at home, and the idea turned into a multi-year, multi-location endeavor that would eventually make millions – for someone else.

“This thing started in about 1988,” says retired Brown-Forman executive and Founder of Kentucky Artisan Distillery Steve Thompson. “It started out with Owsley Brown. Owsley had a koi pond. He would call over to the distillery and ask us to get him a bucket of the spent grains to feed to his koi. One day he called me and said, “You know, we should try commercializing this because my fish like it.” I did some research and what I came up with was that you can’t sell it and claim any benefits unless you do test trials. We didn’t have anyone who did aquaculture, but it turned out that Kentucky State University had an aquaculture program.”

“We decided to build out at Early Times, they had a maintenance building out there,” says Thompson. “Our research showed that Tilapia were the easiest things to raise. We bought some fingerlings from South Carolina and we started raising them in these stainless steel vats, like what you cooked bourbon in. We started to feed these things and doing our trials.”

“There was a warehouse out at Early Times, now Brown-Forman Distillery,” says retired Brown-Forman executive Dave Schieruch. “They decided to put raceways in the building. They would buy starter fish, haul them to Mississippi, and put them into fingerling lakes to grow them to a certain size, and then transfer them to this raceway in Louisville.”

“After a few months some of the people on the project came to us and said we need to start raising our own fingerlings because they are kind of hard to get,” Thompson recounts. “So I said well how do we do that? And they said we needed some ponds. We looked around for ponds, and the closest thing that we found was in Jamestown, Kentucky right off the Cumberland River. Around that time Owsley came to me to ask how it was going and I told him about the need for fingerling ponds. He said well why don’t you do it? I said it’s pretty expensive, and he said well I think there’s a lot of opportunity here.”

“I went back down there and bought 20 acres right off the Cumberland River,” says Thompson. “We ended up hiring a guy and building a research lab down there. We started digging ponds out and pumped water in from the Cumberland River to raise the fingerlings. Then it came out that the real money is in intensive aquaculture. You raise the fish in a conditioned environment with controlled oxygen and nitrogen levels. The warmer it is the more they eat and the faster they grow. By that time we thought why not just go into the fish business instead of just selling the feed?”

“We had an engineer come out and design an intensive system with filters to filter out all the nitrogen, all the poop in the water, and to reuse the water,” Thompson says. “It was an intensive, self-contained system. We proceeded to build a huge building out at Early Times, which is now a bottling hall, by the way. It was a huge building and it had big concrete runs that were about 200 feet long with this big filtering system. And we were going to sell the nitrogen we got out as fertilizer. The whole thing was that we were going to use our spent grains to feed the fish, fatten the fish, sell the fish, sell the nitrogen, sell the grains, and do the research that would allow us to sell the grains and claim what this stuff did for the fish.”

“They started it up and the fish would swim against the current in the raceways and they would feed them and the fish would get bigger then they would sell them,” recalls Schieruch. “Two things that came with inexperience. First, there’s an oxygenator that puts oxygen into the water. It stopped working and no one noticed because it didn’t have an alarm on it. So that was fish kill number one. So they loaded it back up and there was a filter that takes the fish dung out of the water and it didn’t work properly, so then the fish got diseased.”

After about three years they started bagging up the grains and selling them as breading for fish, and the product was sold at Sam’s Clubs and many other retailers.

“Then we decided there wasn’t enough money in tilapia,” says Thompson. “The real money was in striped bass. We could sell the striped bass to the Chinese market in Canada because it was a good market for fresh fish. Our game plan was to scope up from this intensive system. We went down to Clarksville, Mississippi and built bigger ponds – ten acre ponds. We built ponds, hired people, installed pumps. The reason we chose that location was because it’s swamp land and there’s a lot of water and also it’s warm in the winter. Fish grow when it’s warm and they don’t when it’s cold.”

“Right about this time we had bought a batch of fingerlings from North Carolina and put them in the intensive system [in Louisville],” Thompson continues. “We had all these filters in the building but none of the people there realized they had to clean them out. So one night they were so full of weight they just collapsed. It was a huge mess. There were lawsuits back and forth between everyone. We repaired everything and put those new fingerlings in there and we found out they were growing like crazy. We were back in business. But then we discovered the fish had a common virus, which fish get all the time, but because we had switched to striped bass there was no pharmaceutical approved for them. It was approved for tilapia and about five other kinds of fish but not for striped bass. So basically Thanksgiving about 1992 we took 50,000 pounds of fish to a rendering plant and killed them all.”

“In the middle of the night they brought some outside people in with EPA suits on to handle the fish because they were diseased,” recounts Schieruch. “The neighbors saw them and thought there was some kind of extraterrestrial thing going on. After that they just shut the whole place down.”

“It was about this time Owsley came back and said, “I don’t think that Brown-Forman should be in the live anything business. We do well with bourbon.”,” recalls Thompson. “I think their efforts to be entrepreneurial had received a lot of heat from a lot of people. We went to the meeting to present what we had and what we could do and Owsley said, “Ok, we’re through with the live fish business. Get rid of it. Sell it.” An investor I’d been talking to ended up buying the whole thing [in Mississippi] for a million bucks, lock stock and barrel. We just shut down the plant at Early Times and sold the land down in Jamestown to a guy who worked for Ford Motor Company who started a shrimp farm, and he’s still growing them down there.”

“The investor, John Fischer, who bought the Mississippi operation had asked what he was buying and I told him 40 acres and a bunch of striped bass,” recalls Thompson. “We had no idea how many there were so we couldn’t tell him exactly how many were in there. Maybe a month after Fischer bought it there was a massive fish kill in the North Sea and the price of fish went from $2 a pound to $6 a pound. We thought there were maybe 20,000 pounds and it turned out there were 80,000 pounds of fish. He sold the fish and paid off the debt within a month. It’s still in operation in Mississippi, still called Nature’s Catch, and it’s still the largest aquaculture operation in the United States.”

While this project was a massive success on many different levels, it was also the impetus for getting Brown-Forman back to its roots as a whiskey producer, Thompson says. In fact, according to him it was the impetus behind the purchase of the Labrot & Graham property that would be nurtured back to life and remade as Woodford Reserve. But that’s a story for another time.