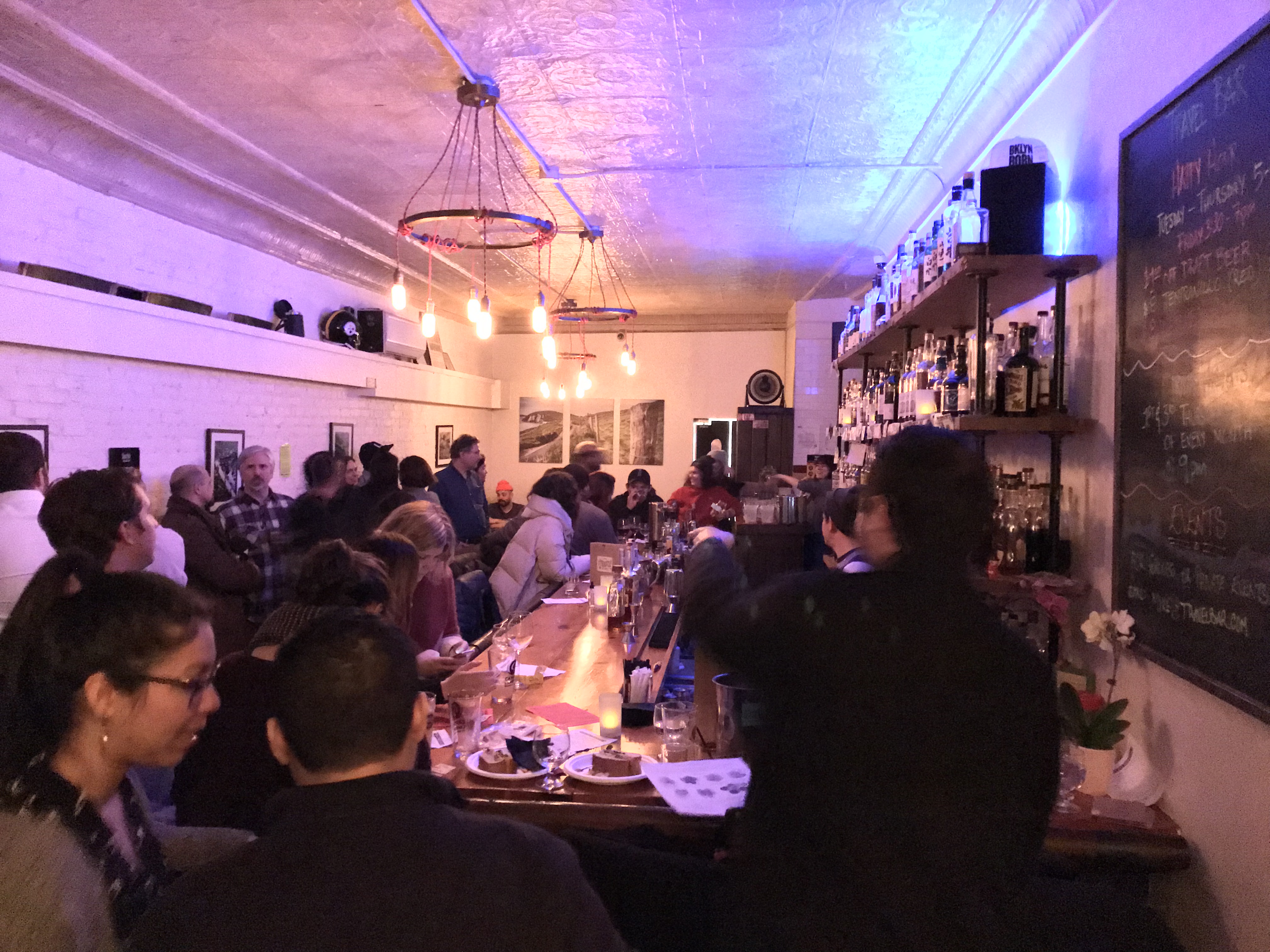 Why write about whiskey in Brooklyn?

Bourbon and Brooklyn have a forgotten relationship. Their past is murky and violent and because of that history, combined with an untapped real estate market, the two are now in a more stable and mutually beneficial pairing.

The year was 1810 and the place, Brooklyn. The Cunningham and Harris Distillery was constructed in an unused section of the borough – that section is now called DUMBO (down under the Manhattan bridge overpass). They are not the first, nor the last to do so. As time passed more distillers built thriving empires… criminal and otherwise.

Over the next 50 years a series of unregulated and seemingly unstoppable distilleries prospered in Gowanus, Flatbush, and in time, the lost area of Wallabout Bay or as it’s commonly known, the Brooklyn Navy Yard. Fire, pollution and unpaid taxes led to the U.S. government stepping in and shutting them down. The ‘Whisky Wars’ took a toll on Brooklyn and when the dust finally settled countless lives and barrels were lost.

The return of whiskey making to Brooklyn begins in early 2000. The once empty industrial lots, where the ghosts of outlawed distillers still howl and curse at the IRS, became home to youthful Spirit makers. In 2010 Kings County Distillery began making Bourbon and other whiskeys in (of all places) the Brooklyn Navy Yard. In 2012, Sarah Ludington and her husband Daric Schlesselman started Van Brunt Stillhouse in Red Hook.

That same year Widow Jane Distillery built a base of operations in the same region of Brooklyn.

Tom Potter, Allen Katz and Bill Potter chose Williamsburg for their headquarters, making rye whiskey, Bourbon and gin. The industrial spaces were left empty for scores by the ‘Whiskey Wars’ and its repercussions were being brought back to life in Brooklyn.

If you distil it, they will come

Neighborhoods where bars that once profited from serving cheap rotgut from local distilleries have gone the way of the Ticonderoga. In their stead, high-end cocktail and Bourbon bars quietly swept in and filled the void. Quality Spirit driven oases like The Clover Club, Travel Bar and Grand Army took root and thrived, thus creating a Brooklyn Imbibing Frontier.

Mike Vacheresse knows this frontier extremely well. He’s the head bartender and part owner of The Travel Bar located on 520 Court Street, in between two of Brooklyn’s spirit-forward neighborhoods of Red Hook and Gowanus, Mr. Vacheresse was kind enough to answer a few questions about Bourbon and bars and The Borough of Churches (Brooklyn).

American Whiskey Magazine (AWM): Can you give us a brief introduction to yourself?

Mike Vacheresse (MV): I have been bartending for 25 years in all kinds of places – hotel bars, catering, wine bars, high-end Japanese restaurants, steakhouses, you name it. I have seen it all. Travel Bar was born out of taking the best of what I learned at all of these experiences.

MV: I live here. My kids go to school here. I am on the Community board. I think that I made something special with Travel Bar and I wanted it in my neighborhood.

AWM: Does being in Brooklyn make a difference in customers and what they drink?

MV: There is no difference in sophistication. There are a ton of people in Brooklyn and Manhattan who find us because they know we have a carefully curated list. The difference is in taste. Brooklyners are more Bourbon focused than Scotch focused.

AWM: What initially got you behind the bar?

MV: It was a practical decision. I used to take long bike tours. I rode across Canada. I rode through Europe and I backpacked in Asia. So, I wanted a job where I could take off and fund my passions for cycling and travel.

AWM: How long has your bar been open?

MV: Five years in November! We had our birthday party on December 7.

AWM: What is the future of Bourbon (and cocktail bars) in Brooklyn?

MV: There are a number of high rises currently being built so that will pull more people from Manhattan. That means that there is going to be a glut of new cocktail, wine and whisky bars. These bars will need to set themselves apart.

AWM: Does your bar have a Bourbon based cocktail that represents Brooklyn?

MV: Yes! We do a Tiki Adam Old Fashioned. Tiki Adam is a local legend who has more than 600 rums in his apartment, but he drinks his old fashioned with Bourbon. The drink has Johnny Drum Bourbon, Sweetdram Moonshine Liqueur and Bitterman’s Tiki Bitters with a grapefruit twist.

MV: Too many to name. We sell most of the major hitters, but we pride ourselves in introducing people to new ones. We have more than 150 Bourbons, one of which is Catoctin Creek… I know that it isn’t a Bourbon, but the ryes are fantastic.

The master distiller, Becky Harris, is a master. Trail’s End is an 8-years-old Kentucky whisky that is aged in Oregon white oak. We sell 36 Sazeracs brands. I love the E.H. Taylor Single Barrel Bourbon – it’s a great value product for the industry.

AWM: Best drink to order at your bar?

MV: Our barrel aged cocktails. Right now, we are featuring the Boulevardie-Hey! This is our riff on a Boulevardier made with 1792 bottled-in-bond Bourbon, Contratto Bitter and Meletti Amaro. Blended together and aged four weeks in a five-litres barrel.

The Brooklyn Imbibing frontier is vast and thrilling to behold. The County of Kings has reached a point where one can sip Blanton’s in Bensonhurst, tour a distillery in Williamsburg and an order a perfectly crafted Red Hook in Carroll Gardens.

Those not familiar with The Red Hook (the cocktail not the neighborhood) have missed out on a slightly sweet, Rye forward libation. Enzo Errico from the world-famous Milk & Honey in New York City crafted this tribute to Manhattan (the cocktail and the Borough) with a selection of simple ingredients and easy to pour measurements.

Combine ingredients in a mixing glass and fill with ice. Stir well for 20 seconds and strain into a chilled glass.

When examining the connection between The Borough of Homes and whiskey two things come to mind.