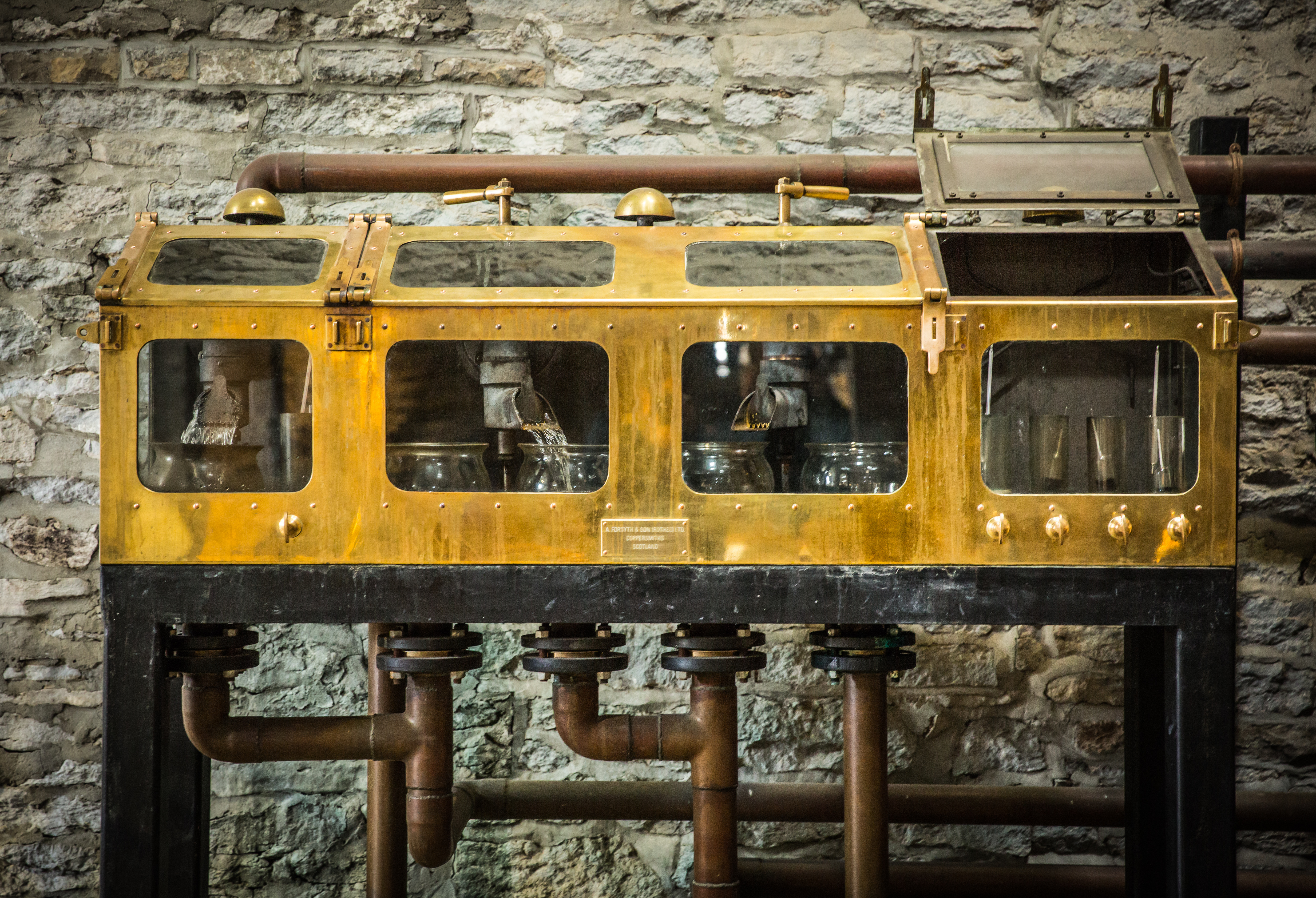 Cryogenic freezers, culture tubes, fluorescing microscopes, mass spectrometers, and Erlenmeyer flasks are not the pieces of equipment that come to mind when Bourbon enthusiasts think about the equipment needed to make their favorite spirits. Copper stills and steel fermentation tanks, yes, centrifuges and autoclaves, definitely no.

But to ensure every time you buy a bottle of your favorite whiskey that it tastes like the one before, distilleries not only employ expert staff for distilling, aging and packaging at their manufacturing facilities, they also have dozens of lesser known personnel that are essential to quality control. Behind every bottle of Bourbon, or other spirits from major distilleries, there is a team of chemists, microbiologists and even psychologists.

Science supports whiskey making art in the research and development (R&D) department at the Brown-Forman Corporation in Louisville, Kentucky. Founded in 1870, Brown-Forman is the company behind such iconic Bourbon brands as Woodford Reserve and Old Forester. It also owns the world’s best-selling American whiskey brand, Jack Daniel’s No. 7 Tennessee Whiskey, as well as other spirits. Samples of all of them spend time in the R&D labs in Louisville.

Thanks to the cluster of historic red-brick buildings and careful landscaping, Brown-Forman’s corporate headquarters resembles a small liberal arts college. Indeed, employees refer to it as ‘The Campus’. Contained within the campus, in a strikingly remodelled building that was once a whiskey warehouse. The building next to it is topped with the 64-foot-tall Old Forester bottle that was originally built as a water tank. These house employee offices and the R&D laboratories.

Elizabeth McCall is the assistant master distiller for Woodford Reserve, made at the company’s distillery in Versailles, Kentucky about an hour’s drive east of Louisville. She was first hired a decade ago as a sensory technician, so she is well-acquainted with the components of making sure every bottle of whiskey conforms to the standard. Quality control begins with the basic ingredients.

“First we do a sensory check on our grain,” explained McCall. This involves a visual inspection of the corn arriving on trucks from Kentucky farmers. There’s also a process of smelling the grain at both ambient temperature and by heating samples in a microwave oven from multiple strata of the truck load. The purpose of both is to detect any “off” odors including mustiness.

Senior scientist Kristy Holsopple, who is a microbiologist, also inspects grain shipment samples for aflatoxins, carcinogenic fungi that can grow on grain in humid climates such as Kentucky’s, and for moisture content.

“We make sure that the grade of the grains conforms to USDA (United States Department of Agriculture) standards. We have the option to reject any load that does not meet those standards,” Holsopple said. She added that “almost never” is there a load that needs to be rejected.

It doesn’t hurt that Brown-Forman has cultivated relationships with specific farmers, so it’s in everyone’s interests that the grains coming to the distilleries are of top quality.

..every once in a while, something unusual happens

Holsopple’s lab oversees the production of the Brown-Forman yeast strains, maintaining their genetic integrity (they are stored in cryogenic freezers at -80 degrees Celsius in multiple locations) and then testing the thawed cultures for viability, as well as for bacterial contamination. After the yeast are added to the cooked mash to carry out their task of fermentation, the samples are taken throughout the process to monitor emerging alcohol levels, possible bacterial contamination and other factors. Once the mash has fermented to produce the distiller’s beer to be distilled into whiskey, the chemists and microbiologists have more tests.

Before distillation, samples are tested for the percentage of alcohol by volume (ABV) and for pH (measurement of acidity/basicity). There are more sensory tests. “The beer should not smell sour,” said McCall.

Analytical equipment also tracks molecular fingerprints in samples of distillate before the new make whiskey is put in barrels for aging. Then samples are routinely taken from barrels during ageing, a few months before barrels are going to be dumped and before the newly dumped whiskey is bottled.

Holsopple said, “It’s very seldom,” that faults are found. Those faults are almost always a result in a flaw somewhere in the mechanics of the equipment, rather than the biology of the ingredients. If there’s mustiness, something was not cleaned and sterilized sufficiently. For example, a small amount of grain was left in a storage silo and resulted in mustiness in a batch. It was discarded, but Holsopple added, that’s “extremely rare.”

McCall continued, “Sanitation is our friend. It’s crucial.” But even with the most stringent monitoring, every once in a while, something unusual happens.

In her decade with Brown-Forman, McCall could only remember one instance where a funny flavor note showed up in a whiskey, but it turned out to be a useful one.

A special type of rye malt with a specific flavor note (McCall would rather not reveal at the moment, since the whiskey is still aging) had been produced for an edition of Woodford’s annually released, limited edition Master’s Collection. The Versailles distillery is unusual that among Kentucky’s large heritage produces, it makes its whiskey in pot stills, which must be cleaned after each run to insure there is no lingering residue.

Samples of the next distillate to be made on the pot stills after the special edition, came back from the quality control tasting panel with strangely low ratings. McCall was very surprised, until she looked at the comments from the panel explaining the scores. The batch contained that special flavor note from the previous, limited edition run.

“In pot stills, just because of the nature of the still, if didn’t we didn’t have a proper clean out procedure in place for so robust a grain that has so much character and was so far outside the box … it carried over into the batches coming after. We flagged it all in our systems and did all the testing to know exactly where it started and where it stopped. And we marked it. That whiskey is 100 percent Woodford Reserve Distiller’s Select Bourbon. But it just has influence from that robust grain. We’ve isolated it and we will be able to use in a distillery series coming out (Distiller’s Select has since been released).”

That instance also illustrated the importance of the ultimate arbiter of a distillery’s quality control, the tasting panel.

Even with labs filled with millions of dollars of precise scientific instruments, the human noses and palates of the tasting panels are the most sensitive “equipment” for the distillery. “They are 80 to 90 per cent in importance,” said McCall, whose academic background is in psychology. “I was trained on setting up controlled experiments using human and in statistical analysis,” she explained. That is also the case for the current tasting panel directors.

Brown-Forman has a special tasting room within the main chemistry lab. One wall is lined with carrels each outfitted with running water and a computer for filling out the sensory surveys curated by Brown-Forman’s food scientist, Norma Prado.

A core panel of about 15 people will compare the sample to “gold standard” samples of the flavor profile of each product in order to prevent “flavor drift.” A sample might be very good, but if it doesn’t match the standard, it can be mingled in a very large batch and still become Old Forster or Woodford Reserve.

For McCall, “That happens to be the beauty of batching.”

0 comments on “The Bourbon lab”