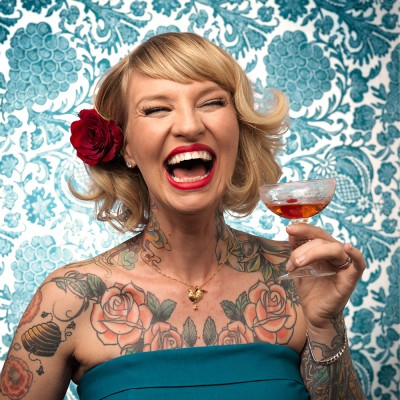 Sharing tales with the master of mixology

Certainly, the first thing people notice about Cincinnati bar owner, master mixologist and spirits writer, Molly Wellmann is that she could be the reincarnation of Groucho Marx’s Lydia the Tattooed Lady. Her upper chest sports red roses, entwined with deep green foliage. Her arms are sleeves of bright colors. But it does not take long to realize that Wellmann’s exuberance is much more than skin deep.

“I love to share the stories of my city of Cincinnati. [Her German-Irish Catholic family settled in the Queen City in the 1850s.] And I love to share the tales of the cocktail that is put in front of each person. I’m a drinks maker and a storyteller. When you get a cocktail from me, you will get a story with it and then an experience.”

That experience is to be found at Japp’s Since 1879, one of several restaurants and upscale bars located along Main Street in the Over-the-Rhine neighborhood on the northern edge of downtown Cincinnati. As one might expect given the presence of the local Salvation Army headquarters on a corner of the district, the area spent some decades being rather down-at-heel. It is not uncommon still to encounter a range of people from all walks of life in the area.

But its architecturally distinguished 19th century buildings made Over-the-Rhine ripe for a comeback and Japp’s, which was originally a hair stylist shop, is at the center of the revitalization. Signs from the original business with the Japp’s logo and offers of services such as “Braids” decorate the walls of the bar and lounge beyond, where customers can relax on leather sofas with their hand-crafted drinks.

Many customers enjoy sitting perched at the long wooden bar of the front room illuminated by antique light fixtures and backed by mirrored rows of liquor bottles nestled under a pressed tine ceiling. That’s where Wellmann stirs her drinks and spins her tales of cocktail history and lore. One of her favorite cocktails to create is the Saratoga.

A recipe for it appeared in the 1887 edition of Jerry Thomas’s classic book, The Bartender’s Guide: How to Mix Drinks. As Wellmann explained, Thomas is considered the founder of American mixology, especially since he wrote down his recipes and techniques for others to follow. The Saratoga cocktail is firmly rooted in the Gilded Age culture of late 19th century New York, where Manhattan’s socialites would take the train to the spa at Saratoga Springs, take in the horse racing and imbibe.

“So, you have the bon vivants and the sporting men and their gambling. They’re watching the ponies and they’re drinking these drinks and the Saratoga would have been very popular. It’s very close to a Manhattan,” explained Wellmann as she placed a beaker, bell jigger, and stirring spoon on the bar. She then proceeded to make her version of Thomas’s drink.

When you get a cocktail from me, you will get a story with it…

She poured a half ounce of premium Italian sweet vermouth, Carpano Antica Formula, over the ice in the beaker. This was followed by two ounces of Wild Turkey 101 Bourbon. Next come four dashes of Angostura Bitters.

So far, this is a Manhattan, but the it is the final ingredient – brandy – that makes up the infamous Saratoga.

“I usually love to use American brandy from Copper & Kings in Louisville,” says Wellmann. But the arcane whimsies of liquor distributorship have recently made that brand unavailable in Ohio. She substitutes with an ounce of Courvoisier Cognac, which is not exactly slumming.

After a minute or so of stirring, Wellmann strains the cocktail into a coupe glass and, with a radiant smile and a confident sparkle in her eyes, she gently glides it to the edge of the bar. She knows what’s in that glass is going to be good.

The resulting sip has uncommon depth and complexity. All the ingredients have merged perfectly into a drink that reveals different layers of fruit, spice, caramel and vanilla flavors in succession. It also happens to be dangerously smooth.

Her next drink was linked to the Spanish-American War and allowed Wellmann to launch into another slice of American history and recognize another bartending great, Charles H. Baker, who she loved so much, she named her cat after him.

Wellmann explained that between the World Wars, Baker traveled the globe on ocean liners in search of the world’s most interesting food and drink. He was the Anthony Bourdain of his day.

“But he didn’t like to drink alcohol straight. He liked to mix it,” said Wellmann. “He
would take it upon himself either to have a wonderful drink mixed or he would do
it himself.”

In Cuba in the 1930s, Baker encountered a cocktail named for the rallying cry of advocates that favored the onset of the Spanish-American War: “Remember the Maine – To hell with Spain!” The American warship, the U.S.S. Maine, sank in Havana Harbor in 1898, during the Cuban war of independence from Spain. The incident helped lead to the Spanish-America War.

For the ‘Remember the Maine’ cocktail Wellmann stirred together two ounces of Wild Turkey rye, a half ounce of sweet vermouth, a scant half ounce of Cherry Heering and four dashes of tiki bitters over ice. After stirring, she strained it into a coupe glass that had been given an absinthe rinse and garnished it with a Luxardo cherry.

The drink was both a startling red color and a festival of fruit and spice where the absinthe made fleeting appearances at both the very beginning of the first sip and at the very end.

For her final concoction, Wellmann changed it up with a vodka-based drink. “You really can make vodka interesting. This is what I make whiskey lovers who say they don’t like vodka and they usually love it. It came from the Russian Tea Room in New York where they were serving vodka before it became a thing.”

Called the Gypsy Queen, the cocktail is made with two ounces of vodka, (Wellmann uses a Japanese vodka, Haku, “Because I like its softness.”), a little over half an ounce of Benedictine, not three-quarters, [she insists] you just have to have a feel for the amount, and a dash of Angostura Bitters.

Stirred with ice and strained into the cocktail glass, the Gypsy Queen is then garnished with a twist of orange peel. The resulting drink is pale orange, which might fool a whiskey drinker momentarily. The sip is, in fact, a refreshing blend of herbs and citrus. It is also very smooth and indeed very palatable, whether you are a whiskey drinker or not.

Wellmann regularly shares her expertise of teaching about cocktail history and mixology at the Distilled Spirits Epicenter’s Moonshine University in Louisville where she instructs owners and bartenders enrolled in the classes for distilling, as well as a selection of restaurant industry professionals.

Cocktail enthusiasts who can’t make it to Cincinnati can still enjoy Molly Wellmann’s masterful drinks and engaging stories with her book, Handcrafted Cocktails: The Mixologist’s Guide to Classic Drinks for Morning, Noon, and Night. A heading to one of the book’s chapters seems to perfectly sum up her cocktail philosophy: “Drink in Some Knowledge.”

0 comments on “Serving a story”