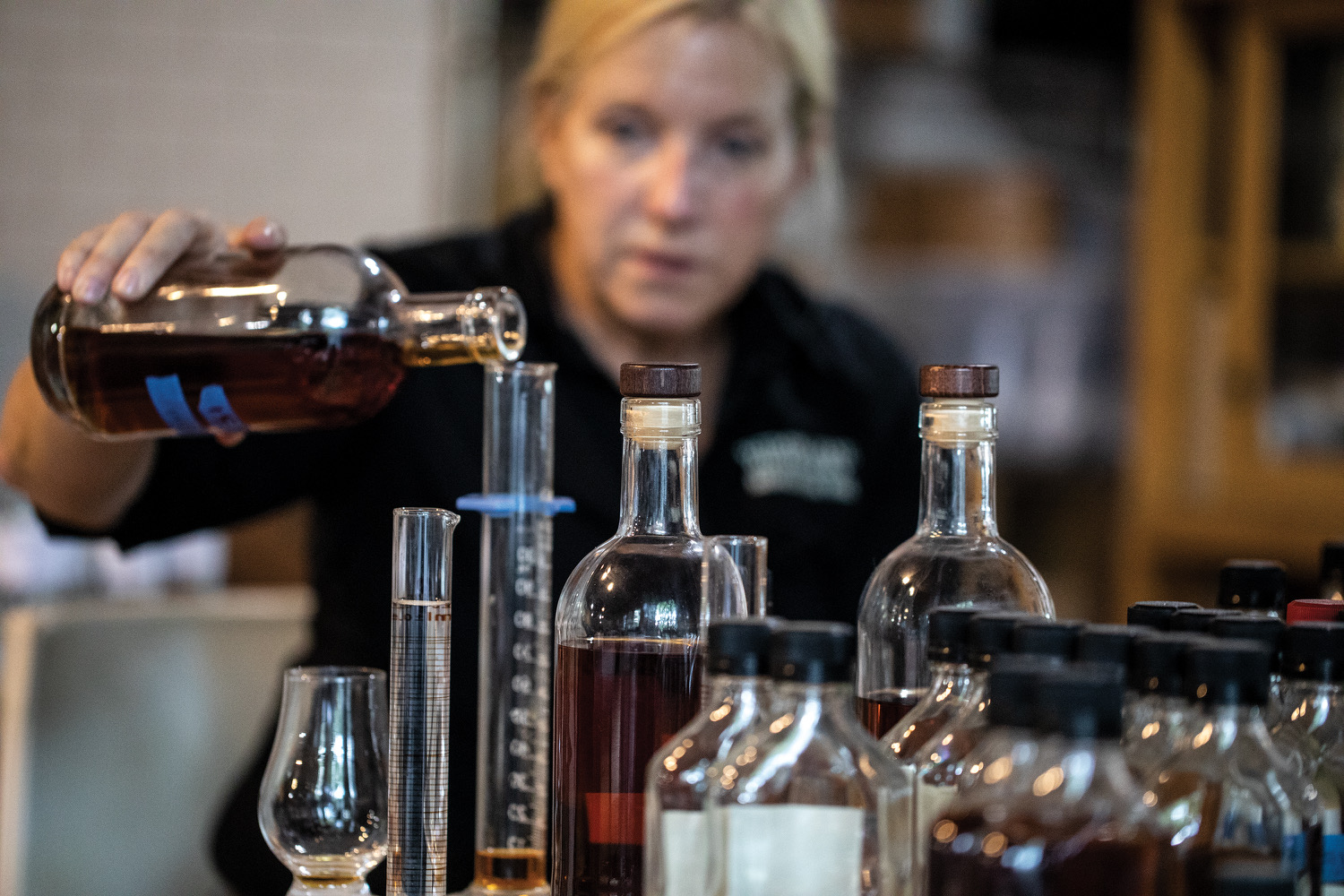 Lisa Wicker grew up in Bloomington, Indiana, near a winery. Though she hadn’t yet started on the career path that would lead her to become a craft distiller in Kentucky, it was there as a teenager she says, “I got the idea that people could make alcohol for a living.”

Wicker’s father was an electrical and mechanical engineer who would frequently leave tools and projects with which she and her two sisters would tinker. “We didn’t know every nine-years-old girl wasn’t getting quizzed on every tool in the tool box,” she laughs fondly.

In college Wicker experimented with fermentation, usually starting with bread yeast. She made wine in her grandmother’s sauerkraut crock and laughs as she recalls the occasional phone calls from her father to “get home and clean up this mess!”

Over the years Wicker moved around with her family a lot, always experimenting with different career paths. At one point she started a costume company and was designing and costuming entire ballets. Then a friend asked her to help with the harvest at a local winery. It was only supposed to take a few weeks, but after four months she knew that was where she was supposed to be. A later talk with a career counsellor confirmed her feelings; he said she should be working with agricultural products, working with wine and in a small farm setting.

Shortly thereafter on a family camping trip at Brown County State Park in Indiana, Wicker stopped in to talk to the owner of Brown County Winery, who offered her a job. From there she patched together her education, pouring every dime she made into extension classes and viticulture workshops at Purdue and UC Davis, sometimes sleeping in her rental car to make ends meet. She and the owner of Brown County Winery were both whiskey drinkers and she credits her time with him for sparking her curiosity about distilling.

Over the years she would work at numerous wineries, finally settling in Kentucky at White Moon Winery. Wicker had one goal in mind for her time in Kentucky: to set up a brandy still and start distilling brandy. She was, as she puts it, in the Napa Valley of distilling. It was a natural progression for her.

Then one day she met Steve Beam, who was in the process of opening Limestone Branch Distillery in Lebanon, Kentucky. He was in the unique position of having a building but no distilling permit, while Wicker had a winery license but no building. She began spending all her spare time driving out to Beam’s distillery to make distilled spirits, and eventually Beam hired her as the distiller for Limestone Branch.

It was around this time she met her mentor, Dave Scheurick, while judging a spirits competition.

“She’s a hard-working person and it’s fun to take people like that under your wing and help them fly,” Scheurick says.

Trouble struck when Wicker found herself out of a job because of the merger between Limestone Branch and Luxco. She made the most of her time off, consulting at the Palmetto Distillery in South Carolina before accepting a distilling position at Starlight Distillery in Indiana.

It was during her year and a half at the Starlight Distillery that Wicker really came into her own as a distiller. She distilled everything from rum to rye whiskey, sharing duties while the distillery was at a point of needing to run seven days a week. It was during this time she was invited to be a guest distiller at George Washington’s Mount Vernon Distillery for four days, where she helped teach better techniques to the historians running the distillery, using the equipment they had to increase yield and quality there.

“It’s been very interesting working with Lisa Wicker since she came here to assist production in March 2016,” says Mount Vernon director of historic trades, Steve Bashore. “She has taught us so much, her revision of our mashing protocol has improved our quality and yields. She loves history and is so well read on distilling, I believe being at Mount Vernon and working in Washington’s Distillery speaks to her on a deep level. Her abilities are so wide-ranging, but she doesn’t discuss the variety of spirits she has created over the years, that humility says a lot about her as a person. Her attention to detail and her ability to adapt and adjust to conditions in the distillery are key here, as we are subject to so many elements in our structures. Whenever I can pry some of her work history out of her, the discussions reveal to me that in other distilleries and wineries, as she was a winemaker for many years prior to becoming a distiller, she has always adapted and seems to have a sixth sense about what is needed. She thinks outside of the box, well with her there is no box really and she doesn’t work by textbook alone, although she has read and studied all of the technical works. It seems to me that the intangible element of her skill-set is one of her greatest assets. That and her amazing palate, she can detect so much in fermentation and distillation, it’s astonishing. Her work ethic is also so solid, she is driven to reach her goals, and it’s good to see her success coming now at Widow Jane, it’s well deserved and hard won.”

She then got the call to work in another Kentucky distillery, Preservation Distillery, and while leaving Starlight wasn’t an easy decision, the ability to work in Kentucky, closer to home, was compelling. She eventually left and started a consulting business, which led to a call from Samson & Surrey. Initially her work was in a consulting role, but eventually she realized she could make her mark at Widow Jane.

She changed the cooperage, began increasing production of the heirloom corn used for the distillery, changed the mashing procedures, and moved the single barrel to a five barrel 10 year old small batch. After a year and a half, Samson & Surrey asked her to begin working full time as  both the president and head distiller of their Widow Jane brand distillery.

Sales increased by 42 per cent last year and Widow Jane had the largest heirloom corn project in North America, working to create its own corn varietal. There has been a change in the batches for bottling and Widow Jane released its first 14-years-old product. There is also a distillery expansion in the works.

“She’s really proud of the expansion she spearheaded as well as the new whiskey she put out at Widow Jane,” says Scheurick. “That’s the type of thing she gets excited about. I hope the Widow Jane folks recognize how valuable she is to the product and operation. Lisa is a master distiller. She’s distilled now at four distilleries. She has hands-on, in-the-trenches experience. My definition of a master distiller is someone who knows what to do when there’s an ‘oh shit.’ They’ve been around in the trenches and they either know what to do or who to call. Lisa has all that.”

Wicker says, “When they sprinkle my ashes, I want them to say that woman made some damn fine whiskey.”

2 comments on “From wine to whiskey”