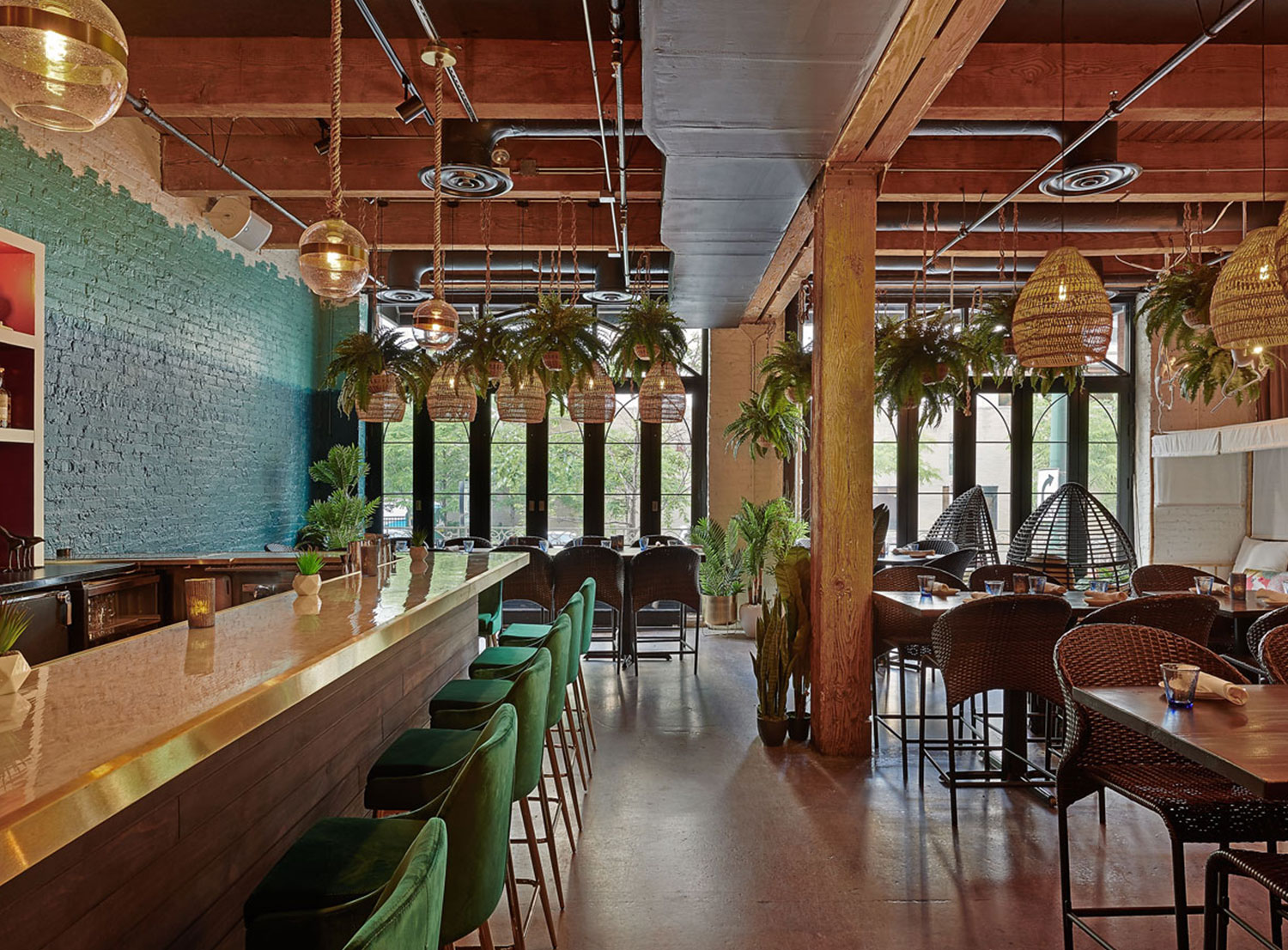 How the windy city does drinks

The Windy City is serious about cocktails, particularly when they involve whiskey. There’s a great deal of pride that comes with all things Chicago; people really love to support local distilleries and cocktail bars that highlight and support whiskey culture. Chicago is a melting pot city, which is evident in the various ways that people enjoy their cocktails and overall drinking culture. But with that also comes a great deal of tourism and the bars and restaurants are ready for that, too.

CHICAGO, BOURBON AND COCKTAILS, OH MY!

It gets cold in Chicago, but other than that the weather is pretty similar to other places in the midwest. Does that influence the drinking culture in the Windy City?

“People in Chicago love whiskey, especially in winter,” says Flora Fauna co-owner and bar manager Liz Pearce. “Lots of Bourbon, tons of Old Fashioneds. Buffalo Trace is probably king here, but we still have a good number of Makers drinkers and Weller is developing quite a following, even among non-serious drinkers. The Manhattan seems to be making a little bit of a comeback, as well as Sazeracs. Flora Fauna is located in a very touristy part of town, so we get a lot of novice drinkers and they haven’t been exposed to cocktail culture like the rest of Chicago natives, so it’s exciting to give them a Vieux Carre or a Boulevardier and see what they think.”

Dylan Thomas Seo, of The Sixth Bar, says: “Whiskey has been such a vital and storied part of the cocktail culture across the United States, it can be tricky to pin down how it is changing and growing. Perhaps the most obvious is the Old Fashioned. Tried and true, it is one of the most commonly ordered cocktails throughout Chicago. It may not be something new and shiny, but it is definitely a trend city-wide. And while it’s common state- to-state, the city does make them wonderfully delicious. Generally keeping it simple, a touch of sweetness, using great whiskey and the perfect amount of bitters. The trend that is more compelling is the growth in locally- made, sustainably-sourced and crafted whiskeys coming onto the market. While MGP [Midwest Grain Products] certainly has its place and can make some wonderfully complex whiskey, there is a wider variety of distillers that are looking towards their local farmers and surrounding resources. Chicago being such a large market, it has the drawing power to bring in whiskey near and far.”

According to PJ Wagner of The Northcott Liquorette, “Chicago loves Chicago”.

“Local whiskeys are king. Koval, FEW, Chicago Distilling, Whiskey Acres, North Shore and CH are all producing wonderful products and it’s very rare to walk into a bar and not see at least one of these local distillers represented on the shelf,” he says.

Lance Bowman, beverage director at Monnie Burke’s, says: “Whiskey cocktails are a huge part of our bar program, and make up a sizable portion of our sales. Every week since opening a year and a half ago our house Old Fashioned (Old Forester 100, orange oleo and smoked black tea, with homemade Mexican hot chocolate bitters) has been the number one seller. I also have my Manhattan riff, called the Split Personality, which I used to compete at the national finals for the Woodford Reserve Manhattan Experience last year, which is almost always in our top three. It does what it says on the tin by splitting the vermouth and bitters components into two separate pieces to create a layered, nuanced Manhattan. Chicago truly loves its whiskey cocktails. I even get a good number of calls for Boulevardiers and dealer’s choice whiskey cocktails as well, along with more people asking about our higher end and rare pours.”

A DRINKING CULTURE THAT APPEALS TO LOCALS AND TOURISTS ALIKE

Classics give people a sense of home no matter where they go, but it’s nice to change it up once in a while to keep things a little more interesting.

“At Flora Fauna, our most popular is the Pineapple Old Fashioned,” says Pearce. “It’s a very simple twist on a traditional, swapping out the demerara or simple syrup for a pineapple cordial, then adding a drop of saline along with the Angostura Bitters. We garnish with a pineapple wedge and a sprig of mint to make it a little brighter. It’s familiar for our tourist crowd, but different enough to call it our own.”

Seo says: “The most commonly ordered whiskey cocktail for us at The Sixth is ‘Call Me Roy’. It is a nearly perfect fall spin on the classic Old Fashioned. We take Old Forester and infuse it with butternut squash, sage and cinnamon. It is then paired with brandy, house demerara simple syrup and a touch of Angostura Bitters. But what really brings it together and elevates the drink, and experience, is the way we smoke the glass with Applewood and finish the drink with mini marshmallows – made by a local chocolatier, Katherine Anne’s Confections.”

Bowman says: “The general public has definitely become more educated on the whole. The ongoing Bourbon boom has drawn a lot of new fans into the fold and their own curiosity seems to have spurred them on to take initiative and learn more about the spirit itself. Even until a few years ago a low number of people at my bar knew what bonded, wheated, high rye or barrel proof Bourbon was and while those people still are a minority it’s definitely grown larger. This actually leads, at least in my experience, to more dialogue about whiskey across the bar. It seems like the number of people wanting to talk and learn about whiskey is continuing to grow. It’s been pretty awesome to watch this change in consumer knowledge and practises happen, even if it does make it harder to find some of my favorite bottles.”

Wagner says: “I personally never start with spirits when creating a cocktail recipe. I make ‘concept menus’ or menus that are themed rather than seasonal or trying to make sure each spirit is represented. For me, it’s all about creating the cocktail that fits the concept and then finding the spirit that best suits the cocktail, not the other way around. If the cocktail would taste best with whiskey when I get to the end, then it gets whiskey and from there I narrow it down by style and brand until I have a complete cocktail.”

After working behind the bar all day, what do these bartenders have to say about the drinking culture they’ve helped to nurture?

“The question of favorites can be tricky,” says Seo. “What may catch my eye or quench my thirst can change from day to day as in nature and that is to be expected. But if I really had to pick just one it would be a Boulevardier. A well-balanced boozy and stirred, where the whiskey is the main actor in the scene and supported by two great additions. The light sweetness and soft tannin structure from a well-made sweet vermouth is matched by the slight fruity bitterness of Campari. Add in a dash or two of orange bitters, a twist of lemony goodness and you have yourself a satisfying libation from the tip of the tongue to the long finish at the end.”

Wagner says: “You should come to The Northcott Liquorette not to visit a bar, but to experience a different approach to hospitality and the cocktail and spirits craft, focusing on taste rather than ingredients or brands. We have a very small reservation-based cocktail lounge outside of the city in the Naperville suburb designed to feel like you are entering my living room (or at least my dream living room) – large leather couches and chairs, long wooden tables and a small eight-seat bar. We offer a curated rare acquisition list of spirits, currently featuring bottles like Macallan M and Macallan 1979. Or if Bourbon is more to your taste then 1945 Very Old Fitzgerald is on offer, as well as a concept-driven cocktail menu, Absinthe fountains and a wonderfully focused food menu filled with simple and delicious dishes for dinner, small bites to share, or dessert.”

Stir and serve over fresh ice in a double old- fashioned glass, with a pineapple wedge and a sprig of slapped mint.

Shake all of the ingredients with ice. Strain and pour into a coupe glass garnished with a lemon peel.

Combine all ingredients in a mixing glass, add ice and stir. Strain into a chilled glass, and flame an orange peel over the cocktail. Garnish with a speared cherry.

Muddle the sugar, bitters and one spoon of water in a rocks glass. Add FEW Bourbon and ice. Stir for 30 seconds or until sugar dissolves and the liquid is chilled. Add a smoked cherry and smoked orange for a bold finishing touch.