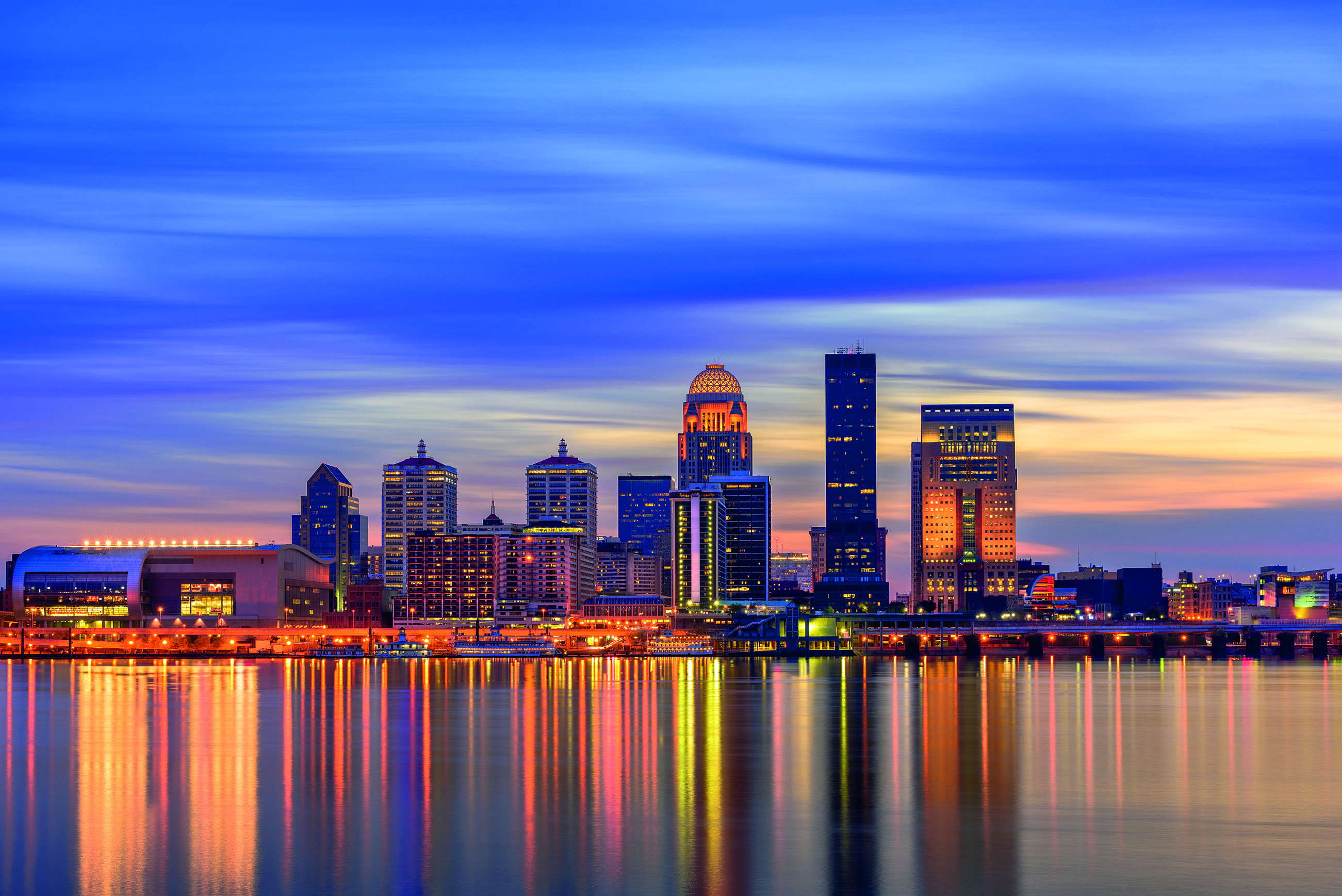 In the 19th century, thanks to a concentration of Bourbon-related businesses including distillery offices, warehouses and shipping companies, a multi-block stretch of Louisville’s Main Street was known as Whiskey Row. Commercially devastated by Prohibition, today the street has made a comeback as a corridor of museums, Bourbon distilleries, hotels and restaurants.

The 21c Museum Hotel on Main Street is both a contemporary art museum and a boutique hotel. Its tagline is “Sleep with art”. While virtually every hotel in the city has a bar with a great Bourbon list, visitors to the city can also “sleep with Bourbon” in accommodations specially targeted to their whiskey enthusiasm. Here are five places
we recommend.

The Louisville Marriott East is the official hotel of the Kentucky Bourbon Trail. Located just off I-64 about 15 miles east of downtown, Woodford Reserve, Four Roses, Wild Turkey and Buffalo Trace (not part of the official trail) are all less than an hour’s drive away. That was the rationale behind the hotel branding itself for Bourbon tourists in 2012, far ahead of other accommodations in the area.  It gave the rooms Bourbon inspired décor with color schemes of amber,
orange and brown to evoke the whiskey theme.

The hotel’s restaurant Charr’d Bourbon Kitchen & Lounge is a leading member of the Urban Bourbon Trail with a whiskey list numbering around 200 bottles. The menu features dishes that
will pair well with a dram or Bourbon cocktail. Bacon is a prominent ingredient in appetizers and salads. The catfish sandwich is battered in cornmeal.
Among the entrées are a Reuben sandwich using Buffalo Trace Bourbon-infused Thousand Island dressing and ribs seasoned with delicious Maker’s Mark barbecue sauce. The hotel has also hosted many Bourbon events, included happens to be the annual Bourbon Affair put on by the Kentucky Distillers Association.  Do note that having a car, whether your own, a taxi or those associated with rideshare apps, will be essential because the hotel is located along a busy suburban commercial corridor on the edge of an industrial park.

The Old Louisville neighborhood just south of downtown is known for its streets lined with enormous Victorian-era mansions. (It’s the second largest national historic preservation district in the United States.) This is where the city’s timber barons, bankers, Bourbon distillery owners and railroad magnates built their houses, each designed to display their owner’s wealth. The Louisville Bourbon Inn is one such mansion. Built in 1887 by attorney and judge Russell Houston, who also served as president of the Louisville and Nashville railroad, it is an ornate, three-storey, red-brick dwelling confidently perched on a corner next to Louisville’s leafy Central Park where free Shakespeare plays are performed outdoors in the summer. Within walking distance are several notable local restaurants.

Hosts Gail and Herb Warren have furnished the mansion and adjacent carriage house with handsome and elegant antiques. There are five en-suite bedrooms in the main house and three in the carriage house across a brick courtyard. The dining room overlooking the park serves as the breakfast room, where hearty breakfasts (for example Bourbon-caramel-apple French toast casserole) are served by a gas fireplace. Bourbon tastings are offered in the second floor Bourbon Library, furnished with a butter-soft leather sofa and oversized armchairs. Bourbon books and periodicals are shelved here for guests to swat up on their Bourbon knowledge.

The Warrens have made sure that no whiskey-loving guest will go to bed thirsty. Each bedroom has a Bourbon barrel repurposed into a lit cabinet housing a bottle or two of Kentucky’s finest, as well as wine and glassware. Nightcap anyone?

Located on Whiskey Row in the same block as the Old Forester Distillery and in a building that once housed offices of JTS Brown & Sons Bourbon Company, the city’s newest Bourbon-themed hotel opened in the fall of 2019 with a name that leaves no ambiguity about its orientation.

Neither does the décor. Hammered copper artwork lines the wall behind the check-in desk in the lobby, paying homage to the copper stills used in Bourbon making. To one side of the desk is a bar cart with a bell which is rung every day at 7:33pm (19:33 in military time) signaling a cocktail toast commemorating the repeal of Prohibition in 1933. Historic black and white photographs of pre-Prohibition Whiskey Row line the hallway leading to the elevators. (There’s also a photo of government agents with axes destroying whiskey barrels at the onset of Prohibition that will make any Bourbon lover flinch.) The bar cart, complete with a bartender, can also make an appearance on request in one of Hotel Distil’s corner suites, which have impressive views of Louisville’s skyline. Guest rooms feature luxurious leather-upholstered furniture, sliding wooden doors resembling Bourbon warehouse doors and abstract art of brown curls of smoke, a nod to the barrel-charring process.

But you do not have to be a guest in the hotel to be a patron in the Repeal Restaurant or the Bitters End rooftop bar. The former is a steakhouse that uses a wood-fired grill fuelled with used Bourbon barrel staves. The extensive Bourbon list contains many expensive pre-2000 and limited production bottles, as well as plenty of affordable choices.

The planned community of Norton Commons is where Chateau Bourbon is located, about 20 minutes northeast of downtown Louisville. Houses, businesses and streets are laid out like a village, with common green spaces and sidewalks to accommodate walking to restaurants, pubs and shops. Guests will find Chateau Bourbon in a white house specifically designed as a bed and breakfast, featuring a welcoming house-length columned porch.

Proprietor Missy Hillock has obviously gone to great lengths to ensure that her guests are pampered. Each of the four guest suites are decorated differently, many with custom-built furniture. A four-poster bed occupies one room, a delicate iron bedstead is found in another. (All beds have lush pillow-top mattresses.) Massages can be provided with prior notice and the house has several small porches and balconies where guests can relax in conversation or with a book, or study their itineraries for touring Bourbon country.

In order to prepare her visitors for a long day of travel from one distillery to the next, Hillock provides a three-course breakfast every morning. It will start with house-made granola and yogurt infused with Bourbon, vanilla sugar and cherries. The second course will be a savory dish that changes every day. Eggs are usually involved and ingredients such as Weisenberger Mills grits and Kenny’s white cheddar are Kentucky Proud agricultural products. The third course will be dessert. (Yes, breakfast dessert!) Look for pancakes, waffles or crêpes served with Bourbon-infused buttered maple syrup.

At the end of the day, cocktails and dessert are served in the living room and customized Bourbon tastings are available upon request.

For a Bourbon enthusiast visiting Louisville who may not have time to venture out of the downtown business district, the Omni has the virtue of having an on-site liquor retail store where some shopping for bottles that never leave Kentucky can occur. There are no rare allocations or hard-to-find brands here, but there are plenty of the solid offerings from the heritage distilleries. The hotel also has several comfortable venues where guests can sip Bourbon straight or in cocktails.

The library, off the lobby, is a handsome space with a high ceiling, crown molding, a mural of a stream of Bourbon accenting the wall behind the shelves of whiskey and lots of conversational seating clusters. The Lewis + Louis Tasting Room is a private room where guided tastings are held and in which bottles may be purchased.

The signature sipping space is Pin & Proof, a speakeasy-style bar that also happens to be a four-lane bowling alley designed by Brunswick Bowling. Even though it’s on the first floor of the hotel, accessible through a door off the lobby marked with a neon sign spelling out “Shhh”, it feels like it’s underground. The ceiling of the windowless room is supported by arched stone pillars that would not look out of place in the crypt of a European cathedral. Bar bites include Bourbon ale-battered green beans and a very local Louisville dish, rolled oysters. To the uninitiated, the mollusks are encased in batter, then rolled in cracker crumbs and deep fried. Cocktail sauce tends to be the preferred
condiment of choice.

0 comments on “Bed and Bourbon”