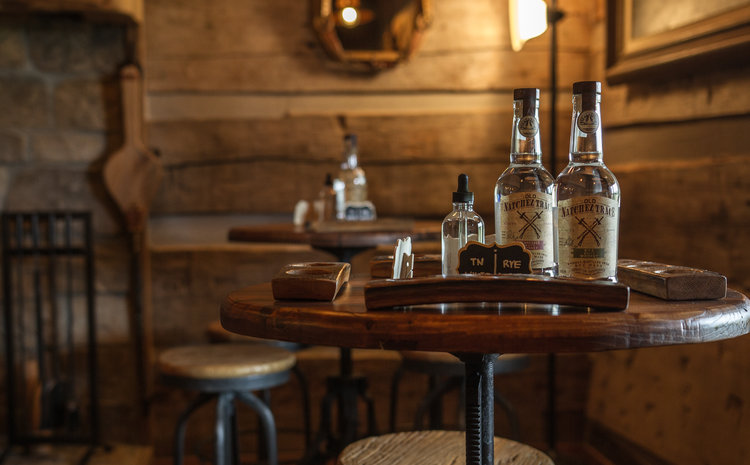 A recent online Tennessee-traveller’s review, signed Becky W. Louisville, reads: “Just outside Franklin, Leiper’s Fork Distillery has a terrific tour. Our guide, Pops, made each of us feel like family. While he had a whole routine of jokes, he also had a wealth of knowledge about Tennessee whiskey. Not generally being a whiskey drinker, Pops made me appreciate the taste. Informative, yet hilarious… oh, and he taught us to speak Tennessee.”

One minute? I soak sore toes in Epsom Salts for longer than that. Who was he kidding? I told the boss I’d be back when it grew up and four years on, it certainly has. The gregarious Lee, who also happens to be a master distiller, recalls a close relative that was gunned down: “My third great-uncle, Sam Locke, a revenuer in Tennessee during Prohibition, got himself murdered for his efforts in 1925. “No, my great-grandfather was not a southern moonshiner. The art of making whiskey did not come to me in a dream. I simply craved escape from the corporate rat race, wanted to grow a beard, wear casual jeans and make whiskey.”

Despite all that, he did get into messing around with booze relatively young. “At just 16, I built a little still out of a five-gallon pressure cooker in my mother’s basement, running a copper condensing line neatly coiled through a five-gallon bucket.” With a mischievous glint in his eye, Lee adds, “I’d learned just enough from archaic literature such as pre-internet Foxfire books to be
quite dangerous.”

Such teenage curiosity springs from a fiercely proud cultural heritage. Lee says: “My family’s pedigree is Scotch-Irish, emigrating to America from Ayrshire, Scotland and County Down, Ireland. Subconsciously I felt whiskey was a truly romantic way to honor my heritage without donning a kilt and sporran.” It is a small wonder such passionate Celtic traditions dictated that the classic copper still should be used. Lee explains, “Column stills are efficient and produce more spirit, yet historically whiskey was made in copper pot stills for good reasons.” Hence the spacious mash room is dominated by a splendid swan-neck copper pot still, the same type I’ve long admired at Glengoyne Distillery nestled in the Campsie Hills back home.

Commissioned from Vendome Copper & Brass Works in Kentucky, this 500-gallon beauty produces some 25,000 gallons of spirit, filling about 500 barrels per year. Lee adds, “Coming out of the kettle our spirit vapor travels through over 30ft of copper, providing a long conversation between the vapor and the copper which I’m convinced results in a soft and well-balanced spirit.” The brand is distilling eight to 10 barrels per week including Bourbon and Tennessee whiskeys, none of which will see the light of day for five to seven years before being released under Leiper’s Fork Distillery’s flagship brand, after surviving Lee’s critical approval: “Our Bourbon will be heated in nature with the expected soft wheat and sweet corn typical of this style.”

Their Tennessee whiskey will have a rye component, using the famed Lincoln County process, filtered through layers of sugar maple charcoal to give it a smooth finish that is clear and crisp. Honoring craftsmanship of Colonial era frontiersmen, early settlers brought to the hills and hollows of middle Tennessee, Lee says, “Our products are handcrafted, we’re blessed with naturally filtered limestone water, our corn, rye and malted barley are all grown along the Harpeth River Valley located right here in Williamson County.” Keep in mind that Bourbon consumption in the south never fell out of fashion, only to become the consumer-driven force seen today. Lee adds, “Our fathers and grandfathers always drank it, long before doing so was considered cool.”

Proof is in the tasting

Following a relaxed sampling, repeated twice, LFD’s bottle with a mash bill of 85 per cent rye, 15 per cent barley stood out to me. Light on the tongue, smooth going down and delivers a magically lingering aftertaste. The labelled bottle of 110 proof is a truly sumptuous rye and happens to be as mellow as a passing cloud. As for those unlabelled over-the-counter rye bottles included for comparison? Commercial rubbish I wouldn’t serve, even to the in-laws when they pop in to surprise you at the weekend.

In tribute, 10 times a year Lee’s distillery Stillhouse Sessions salute the joys of music. He explains, “Being so close to Nashville, we have access to some of the greatest songwriters and musicians in the world.” Spacious mash rooms are transformed to host intimate music nights complete with stage, crystal chandelier, acoustical curtains and Persian rugs. More than 150 attendees relish rousing gigs featuring music by hit songwriters for Chris Stapleton, Waylon Jennings (even Elvis!) and Bonnie Raitt. If invited to a future gig, I promise I’ll come back for one of those ever-popular music nights to test it out.

Nearby small town Franklin is named for Ben Franklin, who never set foot in the place. It is a popular haunt for music legends too, including Justin Timberlake, Chris Stapleton, Brad Paisley and Keith Urban while Nicole Kidman, Carrie Underwood, Jason Isbell, Miley Cyrus and the like revere its small-town country charms. It has an atmosphere of quieter times, tastefully preserved at Main Street’s Gray’s Drugstore. Today it’s an inviting restaurant and bar. Just across the street is the nostalgic Franklin Theater, built 1936, recently renovated and again open to established and up-and-coming talent.

One might occasionally find Joel, splendid Tennessee whiskey in hand, blissful in his armchair, serenely contemplating some literary gem.

A good book, a seductive chair and a cheering dram… heaven.

0 comments on “Rested For A Minute”