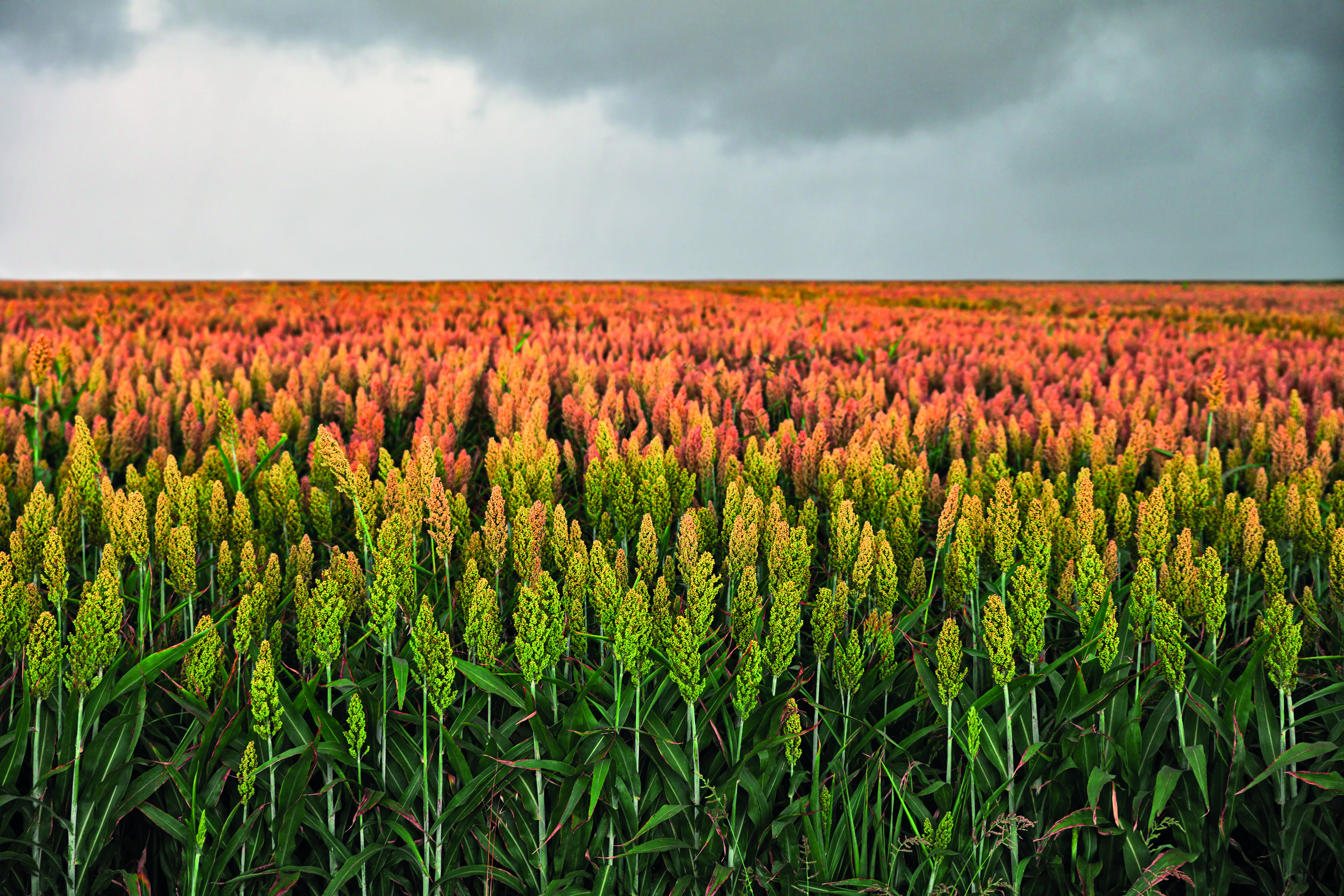 Looking beyond corn, barley and rye

With Scotch, Irish, other European, Japanese, and Indian spirits, the world’s whiskey mash bills are dominated by barley. In North America corn and rye have major, indeed starring roles with barley as a supporting player. But American distilleries great and small have, in recent years, branched out botanically and started to produce whiskeys that utilize other, less traditional fermented grains. Among these grains are oats, millet, spelt, rice and sorghum. There’s also a grain that attentive fans of the original Star Trek television series might remember being mentioned decades before its discovery by our distillers.

In the 1967 episode The Trouble with Tribbles, the Starship Enterprise and crew
are called upon to escort a cargo vessel carrying a vital grain supply. The official in charge of the cargo wants Captain Kirk to post guards by “the storage compartments containing the quadrotriticale”. When Kirk expresses curiosity about the grain, the official starts to explain, prefacing smugly, “Of course, I wouldn’t expect you or Mr. Spock to know about such things…”. But, of course, Spock does: “Quadrotriticale is a high-yield grain, a four-lobed hybrid of wheat and rye. A perennial also, I believe. Its root grain, triticale, can trace its ancestry all the way back to 20th-century Canada.”

Triticale is indeed a real grain, though it was actually developed in 19th-century Germany and Scotland, with the first North American breeding program at Canada’s University of Manitoba in 1953. (No doubt, that’s what Spock was referring to.) The name is derived from the Latin names for the genera to which wheat and rye belong – triticum and secale respectively. Today, in the 21st century, a handful of distillers are using the grain, which is higher in protein and lower in gluten than wheat, to make whiskey. Among them is Dry Fly Distilling of Spokane, Washington.

According to Dry Fly founder Bob Poffenroth, the distillery’s Straight Triticale Whiskey came about because “rye is basically a noxious weed in every single [Washington state] county”. Rye will overwinter as dormant seeds in the ground. So, a farmer may plant a crop in what seems to be empty soil only to find rye sprouting prolifically among what was supposed to be a field of lentils. Dry Fly imported triticale seed from Scotland, enlisted scientists at Washington State University to grow test plots, and then experimented with distillation.

The result was an easy-drinking 100 per cent triticale mash bill whiskey with complex notes of vanilla, herbal rye spice, fruits and nuts, with some floral accents. About 3,000 cases a year are produced, included several cases of triticale whiskey that has been finished in port wine barrels. Another craft operator, RockFilter Distillery in Spring Grove, Minnesota, also uses triticale, though as a small grain in one of its Bourbons, Rail Splitter. As with Dry Fly’s whiskey, the triticale lends a distinct nuttiness to the Bourbon. Interestingly, whiskey giant Jim Beam distilled triticale more than a decade ago and released an 11-year-old Bourbon with triticale in the mash bill as part of its limited Signature Craft series.

Oats have also proved popular. High West (Park City, Utah) has Silver Whiskey Western Oak, a virtually new-make whiskey (barrel aged for all of five minutes) with a mash bill of 85 per cent oats and 15 per cent malted barley. Corsair Artisan Distillery (Bowling Green, Kentucky and Nashville, Tennessee) offers Oatrage which, along with oats, uses coffee malt and six-row barley. Kings County Distillery Oated (Brooklyn, New York) has a 100 per cent oats mash bill, as does Koval’s (Chicago, Illinois) Single Barrel Oat Whiskey using 100 per cent oats in the mash bill. Any whiskey drinker who also enjoys the sweetness of oatmeal will want to try these.

Koval also has a single barrel Lion’s Pride Millet Whiskey that has a mash bill using 100 per cent of that grain. It tastes a lot like breakfast cereal with some fruit sliced on top. It’s not surprising that Piedmont, South Carolina-based Six & Twenty Distillery would incorporate one of that state’s signature crops – rice – into its Six & Twenty 5-Grain Bourbon. The other four ingredients are the usually encountered American whiskey grains: corn, wheat, rye and barley. Sorghum was an important source of sugar on the American frontier and the syrup, made by pressing its stalks and boiling the extract, has long been a staple of Southern kitchens. High Wire Distilling Company in Charleston, South Carolina uses 100 per cent of the grain in the distillate for its New Southern Revival Sorghum Whiskey. Not unexpectedly, it’s very toffee-like with sweet baking spice notes.

Interesting, a handful of Northern distilleries use sorghum as well. Amongst them are Old Sugar Distillery of Madison, Wisconsin (Queen Jennie Sorghum Whiskey) and Jersey Artisan Distilling in Fairfield, New Jersey (James F.C. Hyde Sorgo Whiskey). But wait, all of these producers are using sorghum syrup. Can these technically be called whiskey? The Federal Standards of Identity hardly makes for a page-turning read, but it details the guidelines distillers must follow when applying for product labels. As it happens one of the broadest categories, as you might well imagine, is whiskey. (Fascinatingly, this American government agency, the Taxation and Trade Bureau, or TTB, chose to spell it the British way, “whisky.”) To quote:

“Whisky” is an alcoholic distillate from a fermented mash of grain produced at less than 190° proof in such manner that the distillate possesses the taste, aroma, and characteristics generally attributed to whisky, stored in oak containers (except that corn whisky need not be so stored), and bottled at not less than 80° proof, and also includes mixtures of such distillates for which no specific standards of identity are prescribed.”

The standards then go on to describe the specific requirements for Bourbon, rye, malt, wheat and other types of American whiskeys. (At least 51 per cent corn in the mash bill is, of course, one of the rules for Bourbon.) Note that phrase “distillate from a fermented mash of grain.” Unless some seeds from the sorghum plant got mixed in with the syrup, the spirit distilled from it would not technically qualify as “whiskey.” This seems to have slipped past the TTB in the labelling process. The TTB was a better watchdog when it comes to a product called The One and Only Buckwheat. Produced by Catskill Distilling Company of Bethel, New York, it has a mash bill of 80 per cent buckwheat and 20 per cent unnamed small grains. The word “whiskey” appears nowhere in the bottle, even though it looks and tastes like whiskey.

That’s due to another technical detail. A “grain” is botanically defined as the edible seeds from plants in the grass family poaceae. Corn, rye, barley, wheat, millet and spelt are all members of that family. Buckwheat is in the family polygonaceae. Another ingredient occasionally used in spirits is also not, by definition, a grain – quinoa is a member of the amaranthaceae family. Yet Corsair makes a Quinoa Whiskey. So go figure. Finally, it’s also Corsair, with its hallmark penchant for experimental usage of grain, that may have hit upon the ultimate diverse mash bill. Grainiac 9 Grain Bourbon contains corn, barley, rye, wheat, oats, quinoa, triticale, spelt and buckwheat. Hang on a second, no millet?