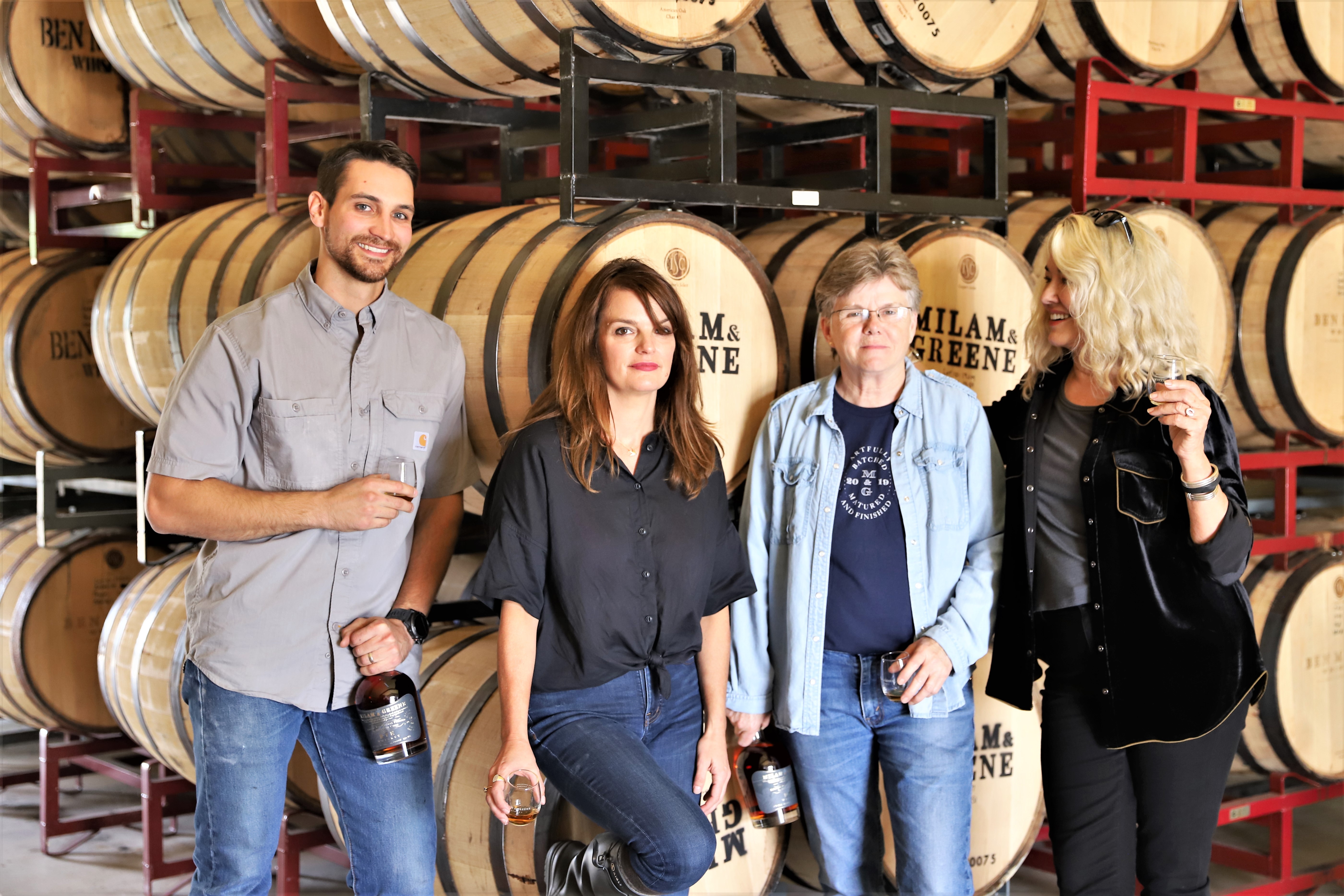 After uprooting from New York, Heather Greene found herself a new home in Texas

Renowned whiskey authority Heather Greene’s career has centered around promoting the enjoyment of spirits. For two years, as whiskey sommelier, she was the director of whiskey education at the famed Flatiron Room in New York. She is also author of the invaluable Whisk(e)y Distilled: A Populist Guide to the Water of Life.

After her stint at the Flatiron Room, she became a freelancer and confesses that she was very much enjoying her New York-based career: “I was on a word-of-mouth circuit of being a consultant for brands. I would help develop brand campaigns. Or help with blending and matching an inventory by nosing, writing nosing notes and writing tasting notes. Generally prepping brands before launch. I was also writing and speaking, so I really loved my life.”

And then she changed it.

Heather had spent some three months in 2018 flying back and forth between the Big Apple and tiny Blanco, Texas, located about 50 miles west of Austin, where she was consulting for Provision Spirits on the release of its Ben Milam Bourbon. Provision was founded in 2017 by Texas entrepreneur Marsha Milam, who named the whiskey after her first cousin (six-times removed) Benjamin Rush Milam, a military hero of the Texas Revolution against Mexico. Appropriately for a Bourbon brand, Ben Milam had been born in Kentucky – while it was still part of Virginia – in 1788.

Heather recalls that, “At the end [of three months] they said, hey, what about joining our company? And I thought, no. I never really pictured myself living in New York and then moving to Texas.”

But after some thought, Heather reconsidered. She had been offered other jobs before, but she realized, “I really want to do this. It was about the people that were already there.”

She had hit it off with Marsha Milam. Both had musical backgrounds and they found a lot of other common ground. Among other activities, Marsha serves on the board of the Austin Film Festival and of H.O.M.E., an organization that provides housing assistance to ageing musicians.

Marsha had hired Marlene Holmes as her master distiller. Holmes began her distilling career in 1990 at Bourbon giant Jim Beam. She was considering retirement when she was lured to Texas, attracted to the idea of distilling a new whiskey into which she could pour her nearly three decades of expertise.

Marsha also tapped brewer Jordan Osborne, a Houston native who acts as mash master. It’s his responsibility to oversee the conversion of the grain mash during fermentation into the distiller’s beer that Holmes distills. Having such a blend of talent was no doubt compelling to Greene, who had developed her skills as a whiskey expert in Scotland, the home of the art of blending whiskey and where she had served as the first American woman on Edinburgh’s Scotch Malt Whiskey Society tasting panel.

Provision Spirits had assembled a crack team of distillery professionals, and it was also sourcing whiskey while waiting for its own to mature. That’s why Greene’s expertise in blending was so valuable and, for an American, unusual.

In the United States, blended whiskey historically has a very poor reputation as a bottom-shelf product. In the 19th century, rectifiers (the wholesalers who bought whiskey from multiple distilleries) stretched their stocks with additives. This wasn’t a matter of adding water, which is done as a matter of course to adjust proof. They were adding unaged spirits which resulted in a larger volume, but lesser quality.

Depending on the mashbill of the base whiskey, it could still be called Bourbon or rye. Consumers could not tell from the label if what they were drinking was unadulterated whiskey or whiskey mixed with other spirits.

The Bottled-in-Bond Act of 1897 was conceived to help clarify what whiskey drinkers were getting. In order to have the term “Bottled-in-Bond” on the label, the whiskey must have been made at a single distillery by one distiller in one distilling season (six months), have been aged in a government bonded warehouse for a minimum of four years and bottled at 100 proof. This didn’t necessarily mean it was going to be a great whiskey, but it did mean that whiskey drinkers knew what they were getting.

By the way, this was the first federal consumer protection law regarding food and beverages enacted in the United States. It was essentially there to encourage “truth in labeling”, but it did nothing to change the labels on blended whiskeys.

That change arrived in 1909 with the Taft Decision. President William Howard Taft essentially issued an executive order stipulating that a whiskey that was blended had to be mixed with neutral spirit made from grain (rather than fruit or cane sugar, which had been widely practiced) and that it had to say “blended whiskey” on the label.

There are very few of these products still on shelves today, but the best known are Calvert Extra, Kessler, and Seagram’s 7 Crown, which contain between 72.5 and 80 per cent grain neutral spirits. They are priced a couple of dollars under or over $10 a bottle. Hardly premium whiskeys.

This is the reason American distillers have avoided using the word “blended” when they use multiple barrels for bottlings. “Batching,” “mingling,” and “marrying” have been the terms of art instead. Not shy about the term, Greene was attracted to the idea of helping to create whiskeys that called on the tradition of Scotland’s master blenders. These are the people with highly tuned palates who choose multiple barrels, often from different distilleries, to create distinctive flavor profiles in their blended products.

“I learned from watching people in Scotland like Rachel Barrie, master blender for BenRiach, GlenDronach and Glenglassaugh. Tweaking some of the nuanced flavors out of a whiskey is really important to me,” says Greene.

She continued, “So we have our whiskey from Marlene and Jordan. [Made in a Vendome pot still]. And then it is blended in with four-year-old whiskey from Tennessee and very old vintage Tennessee for structure and tannins.”

That whiskey is now bottled as Milam & Greene. Greene became CEO of Provision Spirits in 2019. Two current releases under that name are Milam & Greene Triple Cask Straight Bourbon and Milam & Greene Straight Rye Whiskey. In addition to the Bourbons sourced from Tennessee, the former uses the distillery’s own two-year-old Bourbon, containing 70 per cent Texas corn in the mashbill. The rye, sourced from Indiana, is aged in Milam & Greene’s warehouses in Texas, where it is finished in port wine barrels.

Greene’s vision for the company is ambitious and it will be well worth watching what comes out of Blanco in the coming years. The team is also having whiskey made to their specifications at Bardstown Bourbon Company, which still produces Ben Milam Single Barrel Bourbon and Ben Milam Barrel Proof Straight Bourbon.

“Why don’t we bring back the art of blending, batching, sourcing, finishing, contracting and do it all under one site? At the end of the day, our whiskey has to compete with the best whiskeys in the world, not just craft whiskey, ” says Greene.

0 comments on “Changing the Rules”