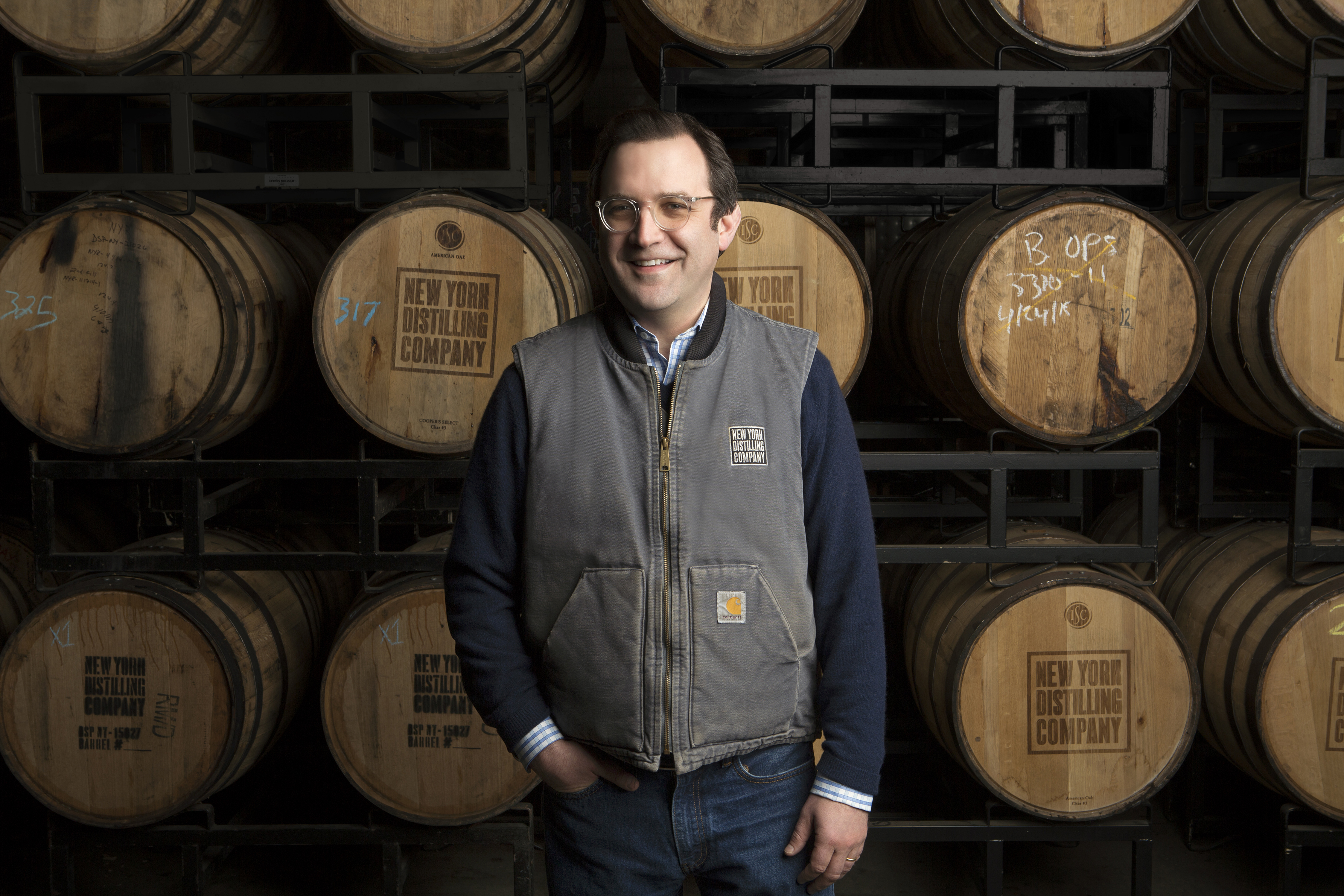 In a world where you can be anything, be someone that thinks outside of the box; it seems to be the attitude that has built the foundations of a new rye empire.

The story of Brooklyn-based New York Distilling Company began many years before it was even a passing thought for co-founders, Allen Katz and Tom Potter. The two experienced vastly different formative years in their careers, but both shared a deep-rooted desire for adventure.

While sat in The Shanty, the distillery’s very own bar, and enjoying a dram of their Ragtime Rye, Allen brought to life their bricks and mortar with his stories of building their dream from the ground up.

Allen’s industry experience began in the early-90s New York bar scene, specifically getting involved in cocktails before deciding to take a reflective look at life. Allen explains, “I took one influential step back that helped create a through line for me. I’d been working in bars and restaurants in New York City since the early 90s and I had never really been out of the US. I took a trip  – a modestly planned trip – for six weeks to Italy when I was 26. That’s 22 years ago now.

“I wasn’t backpacking or staying in hostels. I didn’t have a lot of money, but I had enough… if there was something I wanted to do I could do it. I could splurge on a high-end restaurant there, I could go to a concert and really feel completely invested as an adult human being on this planet. This allowed me to discover a new culture.”

This phase of Allen’s life left such a strong impression that it led to a return journey to Tuscany, working in a culinary school, which bestowed upon him an intimate knowledge of the flexibility of fresh ingredients. “For me, that experience when I came back to New York meant that all of a sudden I paid a different type of attention to the farmers’ market. I wanted to engage with the farmers themselves. Wow, what did they think? Was this left over from a week ago? A month ago? A season ago? When was it picked? How did they think it tasted? It was a glorious cultural and gastronomic infiltration of the senses.”

This period of time informed a professional direction and combined with an ideal geographical position, based a few blocks north of one of the two cocktail bars at the time, Allen settled into life in the East Village.

“I could just feel, based on my Italian adventures and my new food-based experience, that there was something inherently cultural and fundamentally American about cocktails,” Allen continues. “I went off the deep end in that exploration on a personal level. That quickly moved to a more public level in helping to produce events, working as a brand ambassador for certain brands and in that role, visiting distilleries.”

It wasn’t until a visit to UK-based Plymouth Gin, and meeting master distiller, Sean Harrison, that Allen experienced his first urban distillery. “I’m looking down the path and there’s Blackfriars Distillery. Thunder bolts and lightning and ideas. That was the zeitgeist moment for me.

“I was in the nascent stage of my own education of the history of distilling, including types of distilling and different apparatus. But this was the moment I knew.”

It was here that Allen received his introduction to the wonder of navy-strength gin, giving him the inspiration to tailor a smooth gin at 57% ABV. This idea remained conceptually in his mind and was combined with a love for rye whiskey, stemming from a childhood in Maryland, to create part of the dream that would go on to become New York Distilling Company.

“For several years that had become my driving force. I was working, I was paying bills, dating, whatever we do, and I just kept coming back around to the concept of an urban distillery. A mutual friend introduced me to Tom Potter, my business partner, who is well known as the co-founder of the Brooklyn Brewery.

“We had some great conversations and our skill sets just matched up perfectly. A distillery is a different beast to his previous experiences, but he’d had the knowledge of building the brewery from scratch.”

When setting out their stall, the duo knew a Brooklyn base made logistical sense and provided them with not only a space to produce alcohol, but also a melting pot for the people living in the area.

The brand was launched more than eight years ago and after rigorous testing of its gin products, it opened on December 5, 2011 with a fully functioning bar and the ability to sell gin immediately. The distillery runs on a progressive licence, called the Farm Distiller’s Licence, under the proviso that at least one product is derived from 75 per cent New York State agriculture. This granted NYDC the opportunity to have a tasting room, retail shop or public bar if they so wished.

During the first year, NYDC filled 26 barrels and made the decision not to release six-month or one-year-old whiskey. Allen explains, “Two years go by, we’re making whiskey and it wasn’t that it was bad, it just wasn’t as good as I wanted it to be. Skip ahead three years and I like the whiskey a lot, so we started selling Ragtime Rye.

“As each year went by we added older whiskey to it; yes, the youngest whiskey in our flagship is three years old, but now we’re eight years in and Ragtime is a blend of three, four, five and six-year-old ryes.”

But why is the team purely creating rye products? For Allen it’s due to the fact that rye predates Bourbon by around 100 years. “It doesn’t make it better, it’s just that there’s a story to tell that some Americans don’t know yet when it comes to rye whiskey and we liked that concept.”

Alongside building up their production capacity over the years, NYDC has also turned a portion of its efforts towards a 10-year rolling whiskey project that looks likely to come to fruition later this year.

As Allen explains, “Today all of our available whiskey is comprised of Peterson field-raised rye, a hybrid grain that you would find in the English grain belt and is smaller than a traditional European variety. We think about it in the same way you might think about the way grapes are pruned, to concentrate sugars; the sugars and flavours are concentrated in the head of the grain.”

The two co-founders wanted to explore the possibilities in rye and headed out to Cornell University, where they recruited a team to begin research.

“We wanted to know if there were any varieties dating back in some context of antiquity,” Allen adds. “They found the Horton family, who moved here from Leicester, England in the late 17th century. The family became very successful, integrated farmers and helped to found a town that’s a 35-minute drive away from this spot, called Rye, New York.

“This rye variety was their family hybrid. We found a few, but this was the one that passed muster.”

Following on from this discovery came numerous hours of agricultural testing, with Horton coming out on top after a year’s worth. Once the testing was signed off, it was time to head to the tax payer-funded seed bank in order to begin cultivating their new rye. Allen explains, “You know how many seeds you get? 10 seeds; we were given a little manila envelope with 10 seeds in it. Talk about needing patience.

“In order to make a viable crop to harvest, mash, ferment and distil, we needed one million seeds per acre. It took us five years of harvesting and replanting to get to what we have now, which is a perpetual rotation of 40 to 45 acres of this variety alone. This year the Horton we have in barrels will be five years old; I can’t tell you what the Horton family were doing with this rye, but I can tell you that the flavor profile is wildly different to any rye that I have ever tasted and we will create a new brand with it.”

The past few years, in particular, have been a time of exciting movement for rye, which inspired a collection of approximately 80 distilleries in New York State to come together. As a group, these distillers are increasingly drawn to exploring the history and climate in New York and its ability to grow such fruitful rye.

“It’s a great climate and the ideal soil composure for growing rye, whether that’s in the Hudson Valley or the Peterson family farm in the Finger Lakes region where we get our rye from,” continues Allen. “We all gathered together and thought, wouldn’t it be interesting if we put a bit of a stake in the ground that says New York State is known for its American rye whiskey.

“We’ve created our own category, approved by the state legislature of New York called Empire Rye, with relatively straightforward classifications, rules and regulations that we have to follow.”

So, what are these rules? Perhaps the most obvious is that the rye must be grown, distilled and aged in New York State. Then we have the mash bill, which must be comprised of at least 75 per cent New York-grown rye. The barrel entry proof needs to be no greater than 115 and the liquid must be bottled at a minimum of two years old.

“It’s an exciting time,” concludes Allen. “We want to be good partners with our fellow distillers, while also celebrating the fantastic rye whiskey that is currently being produced in our great state of New York. Our Bottled-in-Bond is the first product we’ve released that, from its inception, was designed as an Empire Rye whiskey. Excitingly, whatever it becomes by name, the Horton variety will also be an Empire Rye, so watch this space.”