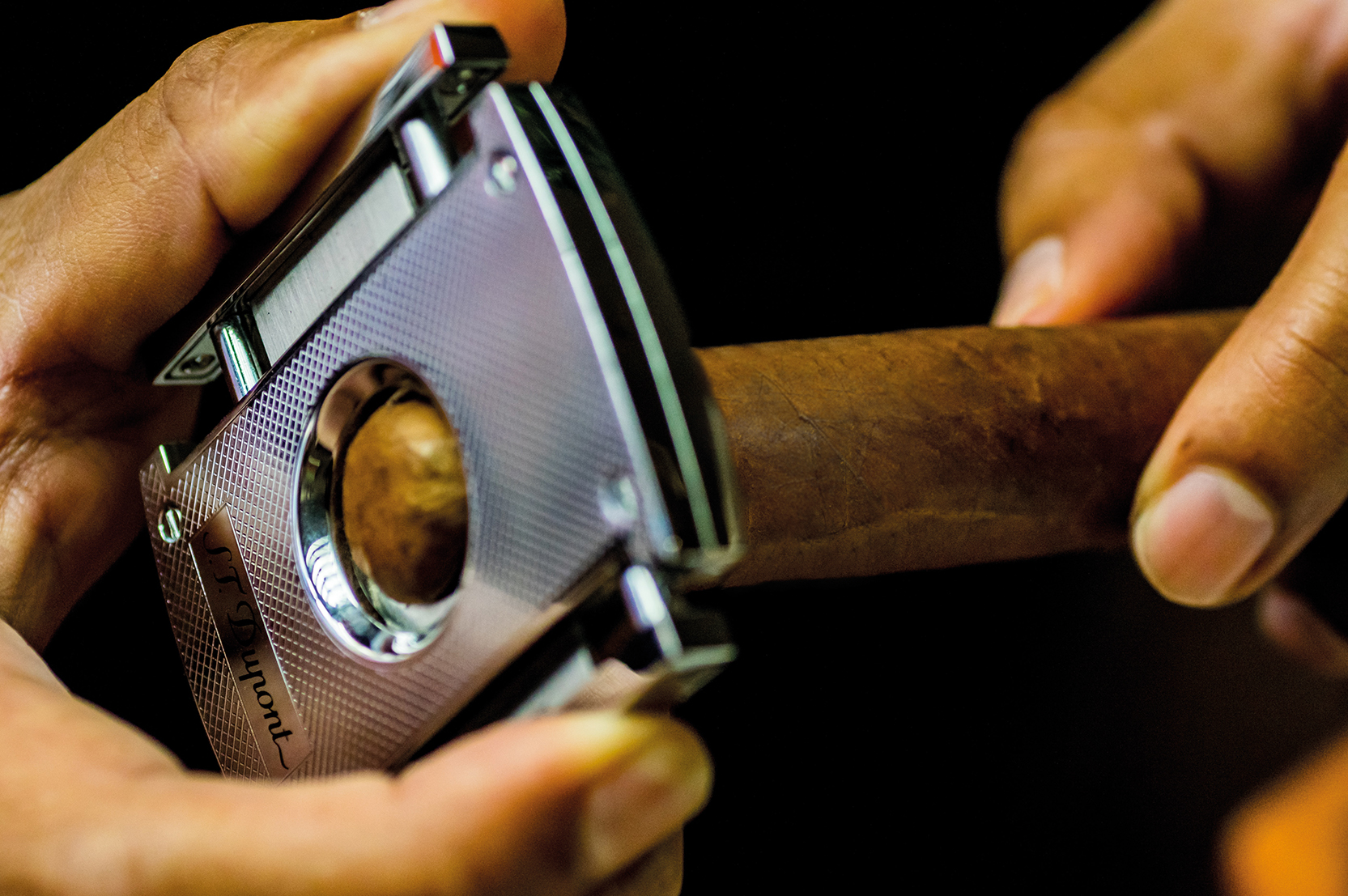 Picking up on the unique preferences

Cigar smokers enjoy simple pleasures. Unwinding at the end of a long day or week with a cigar while enjoying some music or a whiskey, or both, is a great way to relax. But when it comes time to buy a gift for a cigar smoker the task at hand can be daunting. After all, so much about cigar smoking is personal preference. So, what do you gift the cigar smoker who has everything?

Cigars are an obvious choice but be careful here – cigar smokers have specific preferences, so don’t opt for the first shiny gift pack you see. Take note of the brands your gift recipient usually smokes and talk with the tobacconist at your local store for recommendations based on that. Ensure you have a spending limit in mind ahead of time; often non-cigar smokers don’t realize how expensive cigars can be – anywhere from $5-100 or more per cigar, though $8-15 is a typical range.

Cigar cutters also make a great gift; Xikar is the standard for nice cutters, but companies like Prometheus and Colibri also provide a good choice. If you want a custom piece or something you won’t find in most stores, Louisville, Kentucky artist Richard Hutchings makes custom Xikar cutters with scrimshaw handles, Micarta handles, or even Maker’s Mark barrel handles; which can be found at scrimbyhutchstudio.com. Typical cutters are guillotine style and those are the most popular, but you can also get punches, v cutters, and even specialty cutters like the Shuriken.

Nice cigar lighters make great gifts that last. Most people use micro torches to light cigars, but cool flame lighters are also acceptable as long as they use butane and not lighter fluid (as in a Zippo), the latter of which can impart a chemical taste on a cigar. Prometheus makes beautiful lighters that you can engrave for an extra touch. Xikar, Colibri and Lotus also make very nice options, including some table top lighters.

Ashtrays may not get the attention they deserve when it comes to gift-giving, but a nice cigar ashtray can be a piece of art in itself. I personally collect mid-century modern ceramic ashtrays, but for cigars my favorite piece is a copper-colored Stinky ashtray from stinkycigar.com. They have many different colors and a few different designs to choose from, including a car cigar ashtray that fits into a cup holder.

Travel cases and humidors also make good gifts, but it’s important to take into consideration the designs and air-tightness of such items. Cigars need to be kept humid, and poorly designed or cheap humidors can destroy a cigar collection. Look for something with a heavy, tight-fitting lid. For travel cases, look for air-tightness and quality of design over bells and whistles.

Don’t be intimidated by your local cigar shop, as the cigar lover in your life will thank you.

The Nasty Fritas by Drew Estate is a figurado that tapers up from the foot to the head. This unique cigar has a Habano broadleaf binder from Connecticut, three different Nicaraguan fillers from Cuban tobacco seeds, and a Brazilian mata fina wrapper, giving it a surprising and pleasant level of complexity. Because of this complexity this cigar paired beautifully with five whiskeys of different mash bills, making my job harder but all the more fun, but it paired best with the FEW Straight Rye. The rye popped with a truly enticing selection of punchy baking spice notes, particularly with a strong hit of cinnamon candy. The rye whiskey worked its magic on the cigar too and brought out cedar forest notes, before coming in with a hint of white pepper that helped to round it out on the finish.

This 7 x 50 Churchill features Nicaraguan and Honduran filler tobaccos, Honduran binder tobaccos, and an Ecuadorian Connecticut shade wrapper. It provides you with a deliciously mellow smoke that pairs well with a bolder whiskey, but it also paired surprisingly well with the Virginia Distillery Company’s Virginia Highland Whisky, a blend of Scottish and American malt whiskeys that are typically very mellow themselves. The cigar brings out some excellent ripe apple notes and a surprising amount of spice from the barrel from the whiskey, while the whiskey brings out café au lait and vanilla bean in the cigar. Deadwood Rye Whiskey was another good pairing here if you want something a little bolder.

Opus X cigars have built up quite the reputation over the years, meaning that now they are now often seen as the height of luxury where cigars are concerned. This 6 ¼ x 48 toro is a Dominican puro, meaning all the tobaccos come from the Dominican Republic. The Angel’s Share here refers to the winemaking process and not the whiskey making process, but it pairs beautifully with several whiskeys. Together with the Old Fitzgerald Bottled-in-Bond, another luxury item, the cigar brings out candy notes, highlighting vanilla, butterscotch, orange cream, and even a little chocolate in the whiskey before finishing with the enhancement of some subtle baking spices. The whiskey brings out cedar notes and a hint of cafe mocha in the cigar.

There’s a delectable kind of sweetness to this cigar that really reminds me of drinking sweet tea – it has to be the real kind though, not the kind you get in a bottle. This massive 7 x 58 features a Connecticut broadleaf English Market Shade (EMS) wrapper, Nicaraguan fillers grown from Cuban seed, and a Nicaraguan binder. When paired together with the Woodford Reserve Four Wood Bourbon, which was actually a little too overpowering with some of the other cigars that I have tried recently, the whiskey brought out some hints of graham crackers and a note that almost resembled sweet potato in the cigar. This cigar was able to stand up to this whiskey nicely, and it brought out spiced cider and caramel notes in the liquid.

Boasting Northern Michigan’s largest humidor, Nolan’s Cigar Bar is located right in the heart of downtown Traverse City, a summertime destination for vacationers wanting to enjoy everything from film to cherry blossom festivals. Inside the front door is a selection of pipes, pipe tobacco blends, and cigar accessories. The humidor features many popular mainstream brands including Ashton, Padron, Arturo Fuente and Drew Estate. Just outside of the humidor is a small sitting area for customers to enjoy their purchases while looking out on the cherry tree-lined street. Down a corridor you’ll find the cigar bar with more than two dozen whiskeys on the menu and televisions on the walls to watch sports. The house cigar is a collaboration between Nolan’s and the Traverse City Whiskey Co. where Ashton cigars are aged in a used Bourbon barrel to create a unique profile only available in the shop. A great spot for tourists and locals alike.

Thanks to a total smoking ban in Louisville, Kentucky, Riverside Cigar Shop is the closest full-service, indoor cigar lounge and bar in the Louisville Metro area. It’s just five minutes from downtown – just about a mile from the first exit once you enter Indiana or a block up from the Big Four pedestrian bridge that connects Downtown Louisville with Southern Indiana. The walk-in humidor features great brands like Viaje, Alec Bradley, Tatuaje, La Palina, and one of the most extensive offerings of the Drew Estate lines in the area. There is a solid Bourbon list, including private barrel selections. Local beers are always on tap and cocktails are made from scratch with top-shelf ingredients. No matter what you want to pair with your cigar, you’re covered. There’s plenty of comfortable seating, from leather chairs and couches to booths with tables, so plan to make yourself comfortable. The bar opens in the evening, but you can still stop by the cigar shop side during daytime hours.

0 comments on “Giving the gift of cigars”