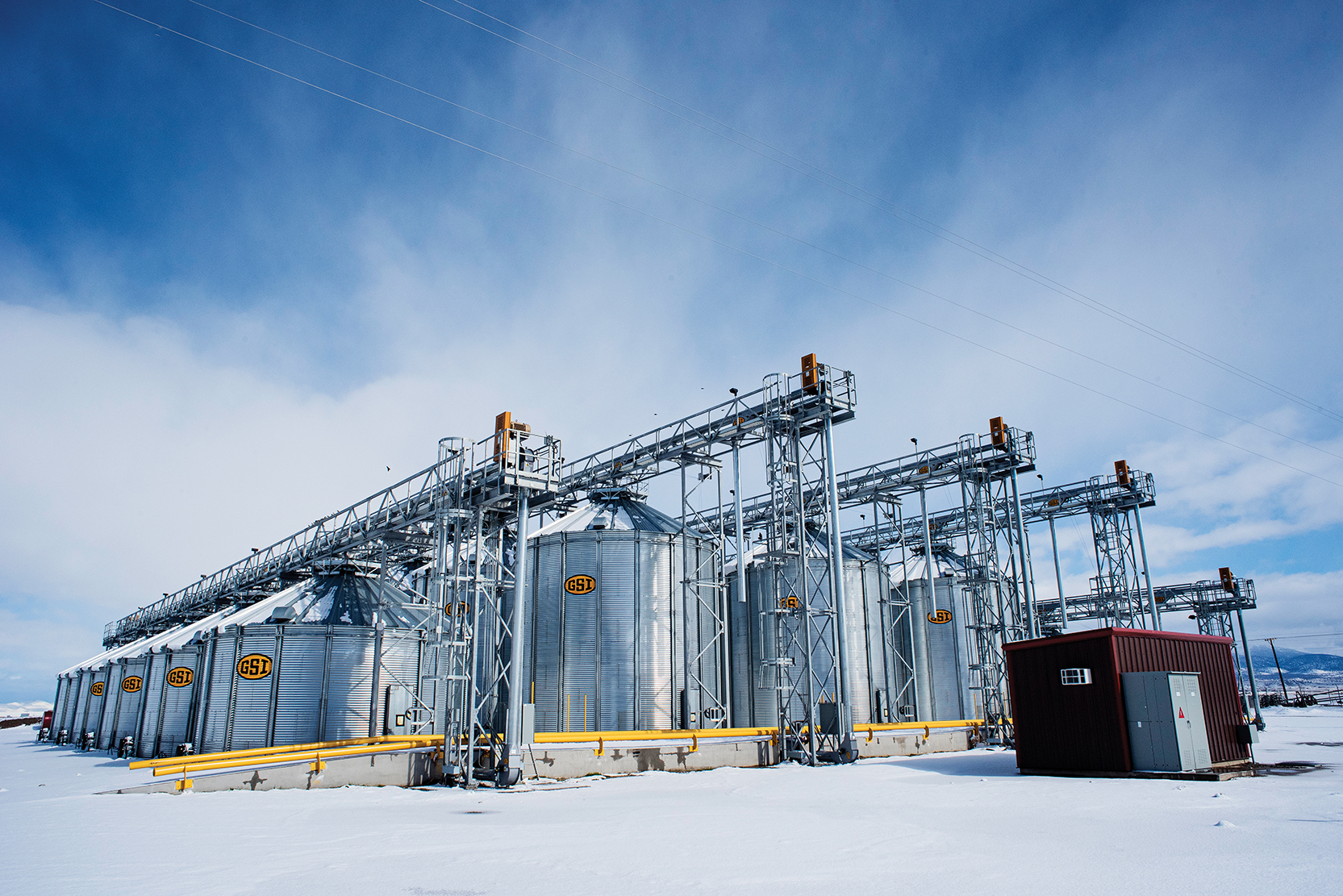 Nevada-based Bently Heritage is bringing sustainability to a new level

Written and Photographed by Andrew Faulkner

Bently Heritage Estate Distillery is easily the most ambitious start-up distillery in the United States, in my opinion, but if you were driving down Main Street in Minden, Nevada, you might blink and miss it. The Mill Building, with a few modern touches to the understated renovation, could pass by like other grain elevators dotting the American West.

If the traffic light at Buckeye Road were green, you would have to pay attention to catch a glimpse of the Creamery Building, a block away. With its original signage reading “Minden Butter Mfg Co. Inc,” it looks like little more than a nicely maintained, nondescript brick building from the pioneer era. The facade gives little indication of the impressive distillery inside.

Founders and proprietors Camille and Christopher Bently came up with the concept, ironically, when the couple was introduced to Japanese whisky in a Mexico City bar.

“We had a fun night – very late, very fun,” said Christopher Bently. “I was like, ‘Oh my God, this is beautiful, beautiful whisky.’” It showed the Bentlys that rich, complex whiskies could be made outside Scotland. “Both of us wanted to create an American single malt whiskey on par with Japanese and Scotch whiskies.”

The Bentlys already had a ranch on which to build a distillery and grow grain. The 65,000-acre Bently Ranch comprises tracts from the historic Dangberg Ranch, which started during the Gold Rush but went out of business in the early 1960s. In the 1980s, the Bently family introduced sustainable farming practices to recondition soil that had sat vacant for two decades.

“Most of the ranch was reclaimed, it had reverted back into desert and was not suitable for growing crops,” said Bently. “To return it to a nourished landscape that could sustain the agriculture we wanted to do, we had to treat it, and that’s when the compost came along.”

The ranch contracts to receive compostable waste from six municipalities around the Carson Valley and Lake Tahoe area. Bently Ranch is now the largest compost producer (and most likely consumer) in Nevada.

Bently Ranch general manager Matt McKinney said, “We want to improve this soil so our next generation and the generations after that have a nice fertile soil here in the Carson Valley. And it’s something we can enjoy and reap the benefits of as we’re doing.”

And on that farm they grew some… barley, and corn, and wheat, and oats, and rye, and a little triticale.

McKinney has 6,000 acres under cultivation. Originally, the ranch grew alfalfa for feeding livestock. With the distillery project, 2,000 acres have been converted to grain for alcohol production: mainly barley, wheat, oats, corn and rye.

McKinney lists about a half dozen barleys he has experimented with for the single malt whiskey. The right corn for Bourbon has not been so easy to easy to find. Bently Ranch has tried 32 varietals, looking for one that matures at 4,800 feet above sea level. “We have a short growing season here,” said McKinney. “Cool nights, semi-warm days: It leads to some really, really cool tastes and some awesome crops, but it also makes it tough for us.”

Bently said, “Corn was very tricky, but we found it. And actually, the beauty of that is it steered exactly towards the corn that we wanted to use for our whiskey. And those are Earth Tone corns: like the heritage corns, with dark kernels. They have such flavor and such character.”

The ranch has storage capacity for 10,000 tons of grain and has enough grain stored within it to sustain whiskey production for the next two years.

Stepping inside the Creamery Building, visitors arrive at a small waiting area that reveals only a glimpse of the 5,000-liter pot of a Christian Carl hybrid still. Passing through a short enclosure, the twin, copper, rectification columns come into view, rising up past clerestory windows to the peaked ceiling. Sweeping metal stairs wrap around each side of a distilling island running the length of the production floor. The chest-high platform pinches at the other end wrapping around a smaller Carl pot still. Between the two stills, a pulpit-like platform curls around the mash tun. Shining stainless steel pipes around the controls of a Headframe continuous still give the impression of a church organ.

Fermentation tanks flank the side walls: stainless steel on the east side for neutral spirit and wooden fermenters for Bourbon and rye on the west. Vodka and gin are made with wheat and oat mashes. Bourbon, rye, mixed grain – basically every whiskey other than the single malt – is made in the Creamery Building.

This facility came as an offshoot of the original plan.

Chris and Camille Bently originally started out to make single malt whiskey. On the way, it was pointed out, they could create spirits to be in the market earlier: vodka, gin, and American whiskeys like Bourbon and rye, which commonly mature at younger ages.

The Mill Building distillery/visitor center/tasting room in the 1906 granary that sits between the Creamery Building and Main Street is dedicated to single malt whiskey production. Both the Mill and the Creamery buildings are LEED (Leadership in Energy and Environmental Design) Gold certified and are listed on the National Register of Historic Places. They were labors of love for Bently, whose San Francisco real estate business concentrated on renovating old and historic buildings, and who grew up playing inside these buildings.

“As a young boy, I’d run around there and play, and dangle off of all kinds of dangerous things that I really shouldn’t have,” said Bently, “And that was… a great experience for me. So, it really captured my heart and my imagination: that building.

“The trick of it is to make something new and functional, but retain the original character and beauty.” The challenge was to keep the rustic nature and aspects of what it had been, but also make it pleasant, warm and inviting to be in. “With the layout of the bar and the seating, I really wanted to have an uncluttered, spacious, relaxed feeling.”

Limited, inaugural releases of Bourbon and rye whiskeys are expected to be available at the distillery early in 2021. The first, limited releases of single malt are not planned for several years: when the whiskey is ready.

Bently Heritage’s Source One Vodkas and Juniper Grove Gins are distributed in Nevada, California, Arizona, Oregon and Washington. UK distribution of these spirits is planned for 2021.

In bringing the loop to a close, spent grain from the distillery supplements the diets of the 1,500 head of cattle that graze on the Bently Ranch’s pastures, enjoying the sustainably grown alfalfa. The “Whiskey-fed Beef” program provides hormone-free, antibiotics-free, humanely raised, GAP (Global Animal Partnership) Level-4 beef to enjoy with your whiskey or gin. It is available at select locations in the Carson Valley and Lake Tahoe areas.

The ranch and distillery, working in tandem, are an ambitious demonstration
of the viability of sustainable practices, as well as an amalgamation of the Bentlys’ passion for single malt whiskey and historic renovation.

“We want to create a paradigm shift to something that’s more genuine, more honest, more transparent,” said Bently. “We just tell it like it is. And we don’t cheat. And we’re very proud of what we do in our spirit.”

For fans of distillery tours, this is one that will not disappoint.

0 comments on “One fine night”