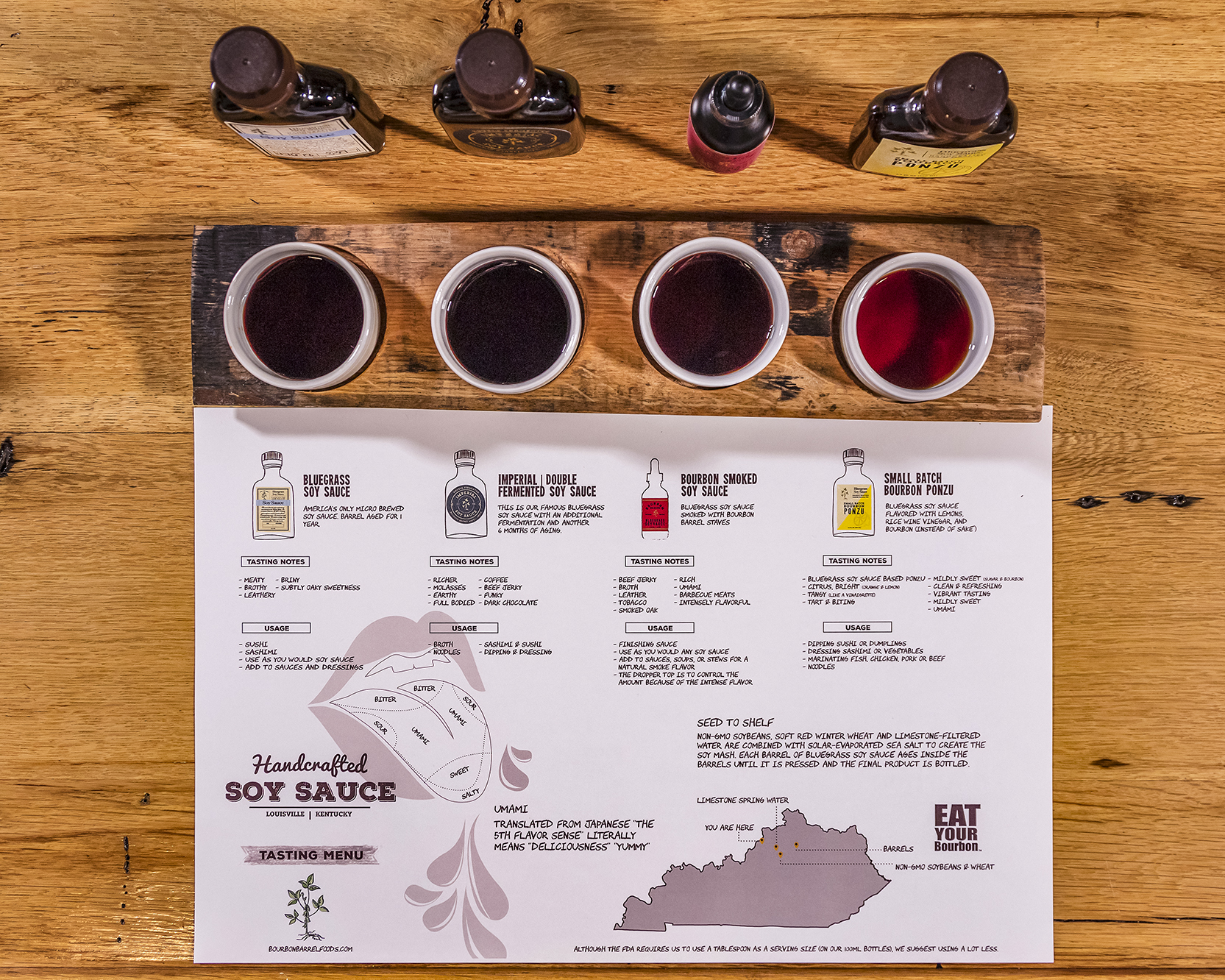 The love story of culinary innovation and Bourbon

Many years ago, I attended a soy sauce tasting conducted by Chef Castro at the Brown Hotel in Louisville, Kentucky. This Bourbon Woman was utterly fascinated after attending about a million Bourbon tastings; captivated by something unique and exploratory for my passionate foodie side. What struck me were the different flavor components and vast styles of soy sauces that I took for granted. Sound familiar?  Flavor and styles of whisky perhaps? So, when I first met Matt Jamie back in the mid 2000s, connected by a mutual foodie acquaintance, I listened to his vision of creating micro soy sauces aged in Bourbon barrels. I celebrate umami like any foodie and Bourbon lover does, so of course I connected on that front. However, to create a total company and brand identity was more than I ever thought could happen for soy sauce in America… but he most certainly did. Add a splash of Bourbon barrel flavor on that soy and I will happily eat my Bourbon.

As a graduate school dropout who used cooking to support himself, the culinary arts became more than a just a hobby for Matt, they became a passion. Although he eventually rose to the title of Chef de Cuisine, he did not want to become a career chef. Later in life, angling for a way to get out of the kitchen and into his own business he used his culinary talents and business savvy to create Bourbon Barrel Foods, located in the historic Butchertown Market in Louisville.

The inspiration for Bluegrass Soy Sauce came about while Matt was eating oysters and drinking beer with a friend. Noticing the earthy and savory notes he began thinking of different food and condiments that are not readily hand crafted in the US. At that time, there were no micro-brewed soy sauces located in America.

What he called a blind passion evolved into studying the synergy of Bourbon and soy sauce and it was the umami (a Japanese term for earthy notes) and mouthfeel that stood out. Umami or savoriness is one of the five basic tastes. A food writer in NY wrote a comparison contrast story about the Japanese expectations of soy sauce vs. American.  Matt called the writer and spoke with him for several hours and the writer suggested age the soy sauce in Bourbon barrels since he would be in Kentucky. Wrap your head around the fact that at that time used barrels were readily available and free to Jamie.

There were so many parallels to the making of Bourbon and soy sauce that it was a natural fit. No one he knew of was focused and concentrated in that arena. Matt brewed his first batch of soy sauce in his home bar, how appropriate – the home bar.

Matt moved back to Kentucky from Florida in 2005 and wrote a comprehensive business plan. Established in 2006 as the US’s only soy sauce microbrewery, Bourbon Barrel Foods has become a cornerstone in both the Bourbon and gourmet foods industries.

Today, Bourbon Barrel Food products may be found in all 50 states and 10 countries. Don’t let this artisanal approach of slow, small and simple (a tag line they use to describe their company) shock you for soy sauce. This company not only fits Matt’s passion for culinary innovations and Bourbon, but his personality. It also fits the timeliness of the Bourbon boom.

“My favorite conversations are with people who watched the Bourbon industry develop over the past 20 years and we had a front row seat,” says Matt. So how does that master of American soy sauce describe the importance of Bourbon flavor with his products? Simply put, “Umami and how it feels in the mouth. Aroma, mouthfeel and finish. We don’t use Bourbon as an ingredient, but age it in a barrel to add flavor, as background note but noticeable. It’s distinctive.”

When conducting a Bourbon Barrel Food’s soy sauce tasting, you better believe it feels reminiscent of where those unique descriptors prevail when tasting Bourbon. Coffee, leather, tobacco, citrus, oak sweetness, molasses and yet, nuances that very well come from our barrel friend that he uses for ageing. Undeniable smokey-Bourbon flavors when using his spice series of Bourbon-smoked paprika and pepper.

When asked the biggest success in his career he does not think he has had that yet, even though he has won multiple awards, but has no plans to settle. He continues his quest for leadership and innovation.

“We will continue to build our core brand, as we are increasing our capacity by 50 per cent.” Considering they just ordered three smokers the size of pickup trucks for his spices, as they used to source smoking outside the company. He means business. Matt has built a team that in his own words, “make him look good and mirror his passion”. Thumbing through page after page of recipes from his book, Eat your Bourbon, I believe this lifestyle for his dynamic line of Bourbon spices and sauces has indeed arrived and found their way into my kitchen. Happily, I will just eat my Bourbon.

Preheat oven to 450 degrees. Heat a large cast iron or oven-proof skillet on high heat. Remove chicken from the marinade and shake off excess. Add 2 tablespoons oil to the pan. Lay chicken thighs, skin side down, in the pan. Do not move the chicken and allow the skin to render out fat and begin to brown, about two to three minutes. Reduce heat to medium-high and once the chicken releases easily, occasionally move the thighs to different parts of the pan to evenly brown the skin. Cook chicken for another 10 minutes or until the skin is very crispy and golden brown. Flip the thighs and place the skillet in the lower third of the oven.

Roast for about 15 minutes. Arrange on a serving platter, garnish with chopped cilantro leaves and serve.

Mix the crushed Bourbon Smoked Sea Salt in a saucer and spread wider than the rim of the glass. Use a lime wedge and rub around the rim of each glass. Hold the glass from the bottom and move straight down and place into the Sea Salt. Lift and set aside.

For the drink
Pour all of the drink ingredients into a mixing glass with ice and mix. Fill up a fresh glass with ice. Strain the mixed drink over the ice. Serve with lime wedges for garnish.

Heat a large skillet over high heat. Add the vegetable oil and sauté mushrooms for eight to 10 minutes or until browned and crispy. Remove from pan, place on a paper towel-lined plate and allow to cool.

Fill a medium saucepan with water and bring to a boil. Add Bourbon Smoked Sea Salt and edamame. Blanch for two to three minutes. Drain in a colander and rinse with cold water to stop the cooking.

Combine marinade ingredients in a large bowl. Place steak in the bowl and turn to coat with the marinade. (You can also place the steak and marinade in a plastic bag.) Chill and marinate for at least two hours or overnight.

Prepare grill for high, direct heat with one part of the grill for lower, indirect heat. The grill is hot enough when you hold your hand about an inch over the hot side and you can only hold it there for about a second.

Remove steak from the marinade and shake off excess. Lay steak on the hot side of the grill. Grill for a couple of minutes on each side, then move the steak to the cooler side of the grill and cook a few minutes more or until done to your liking. Rest steak for five minutes. Slice against the grain of the meat. Garnish with the radishes, cilantro and Bourbon Smoked Togarashi before serving.

0 comments on “Eat Your Bourbon”