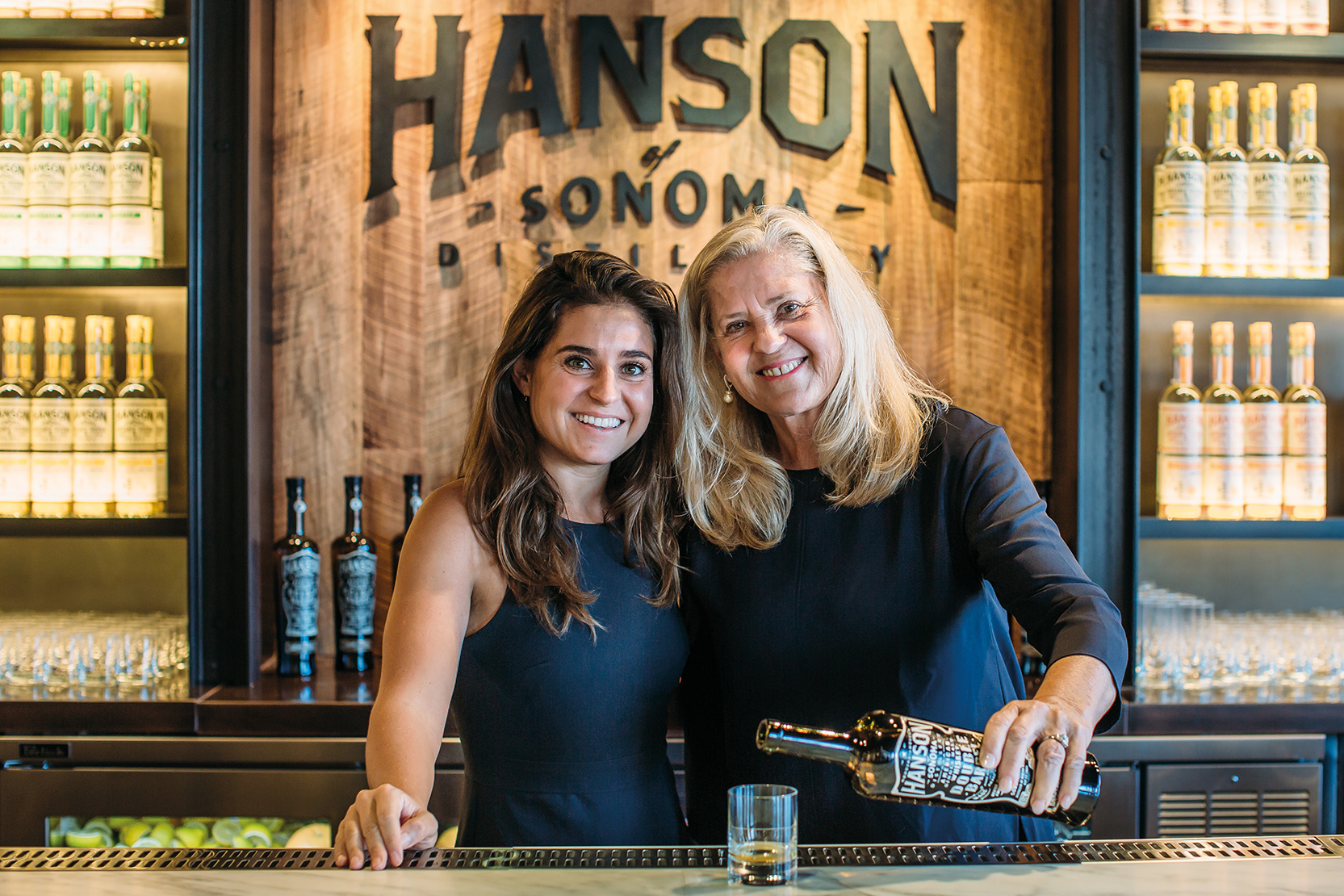 There’s a phenomenon sweeping wine country in Northern California: women vintners and winemakers are adding whiskeys to their portfolios or moving into whiskey-making completely. The variations in how this is happening are numerous, ranging from collaborations using their wine barrels in partnership with distilleries, to whiskey distilleries popping up in wine country. One thing is for certain: the whiskeys they are producing are adding to the craft spirits movement in some pretty unique and impactful ways.

“More wineries are starting to dip their toes into the spirits industry,” says Wine Country Women author Michelle Mandro. “It’s a product that doesn’t rely on the same agricultural conditions as wine, which could provide some production flexibility in some seasons. With the frequency of wildfires and the risk of smoke taint, this could be an option to produce another quality product they can sell. Because of the popularity of Bourbon and whiskey and their interest in the spirit, women in wine country are pursuing their desire to try something different to diversify their portfolio of products.”

It is often said among women whiskey drinkers in particular that their love of the bold flavors in red wines made for a natural segue into their appreciation for whiskey. As it turns out, the same is often true among women winemakers and vintners who go on to produce whiskeys.

“My love affair with the world of wine began decades ago as part of a cut-throat blind tasting group that met on Monday nights. It grew into an absolute devotion to the flavors found in bottles and learning about the nuance of wines of place,” says Old Carter Bourbon co-founder Sherri Carter. “Moving to our own winery in Calistoga, making our wines there and living in Napa allowed me the opportunity to develop an appreciation for all aspects of creating wine – from growing grapes to blending, bottling and beyond.”

“Always a Bourbon drinker, whiskey was a natural progression for me,” Carter continues.

“My palate fell in love all over again – this time even deeper. I studied and developed a whiskey library in my mind of scent and taste, drawing from and adding to what was already laid down there with wine. As the universe of flavors found in barrels of aging spirits revealed themselves to me, I learned how much I loved selecting each one for its own character, then marrying them into the most complex and interesting blend I could imagine. As a small brand, this passion inspires me throughout the artistic blending to the creative label design. I love being able to express my artistry in this way. I have always believed that whatever is put into a bottle, whether wine or whiskey, is a moment in time and a fine work of art bringing those who share in its love together.”

Passion is a common theme in the beverage alcohol industry. Consumers rarely see the labor of love that goes into the final product, and producers have to be truly passionate about what they are doing to keep showing up every day.

“Our path to creating Hanson of Sonoma’s Single Malt Double-Barrel American Whiskey was a family affair,” says Alanna Hanson, co-founder of Hanson of Sonoma Distillery. “What’s so exciting for me is that my three brothers, father, and mother contributed to creating our whiskey from the malt varietals, distillation, barrel aging, packaging design, hand bottling, and labelling. We understand that most whiskies made in the United States are Bourbon and rye but, as a family, we have always responded to Scottish and Irish single malt whiskeys. Seven years ago, our goal was to create a Scottish-style American-made single malt whiskey. Once we decided to move forward with a single malt, we looked at how the Japanese finish their single malt whiskies, and we fell in love with the multiple barrel aging and finishing process. We created a 100 proof American-made, Scottish-style single malt and finished with a Japanese-influenced multiple barrel-aging program.”

American single malts are a growing category, particularly among craft producers. It’s a way to put their own regional or philosophical stamp on a product rather than just making what everyone else is making.

“To make an excellent whiskey takes time, passion, and commitment,” Hanson continues. “We tasted through our aging whiskey every quarter, but the moment I realized that our efforts were going to pay off and result in something special was after four years into the journey, when my dad opened up some of our barrels to see how our whiskey was aging. After that tasting, I knew we had crafted something exceptional.”

There’s a great deal of experimentation and waiting when it comes to all beverage alcohol. It starts with an idea that leads to experimentation before the process can yield something a producer feels is worth selling.

Suzanne Phifer Pavitt, co-founder of Phifer Pavitt Wine, was approached by the team at the Bardstown Bourbon Company several years ago for work on a collaboration that would involve whiskey they were sourcing aged in her used wine barrels. Phifer Pavitt would soon find herself seated at their boardroom table in Bardstown, Kentucky, a meeting which would prove to be fate.

Getting it just right took a lot of experimentation. In the early experiments, Nally would call Phifer Pavitt and they would compare samples, trying to devise a way to get more of the wine flavor to come through in the finished product. After several months it was clear that additional time would not do the trick alone; Phifer Pavitt would have to ship her newly dumped barrels unsanitized in a refrigerated truck cross-country.

“Steve said, well, what if we leave, he called it the dregs, what if we leave the dregs in the barrel? And I said, you mean the lees, which is what’s left over from bottling. But if I ship you the barrels from California to Kentucky with the lees in it, there will be hair growing out of those barrels. He said, I don’t want you to wash the barrels, sand and sanitize and take all the flavor out, we’re just trying to get more flavor. So I said well, here’s one idea, it’s pretty out there, we have a refrigerated truck standing by, so when I dump the barrels for bottling I will leave the lees in the barrel, wrap them, put them in a refrigerated truck, and they will go immediately across the country and you fill them. And the team said, let’s try it.”

After 18 months, Bardstown Bourbon Company released the Phifer Pavitt Reserve collaboration bottle to rave reviews, and additional collaborations are on the horizon. What’s most notable, though, is that Phifer Pavitt was able to introduce everyone from her wine subscription list in California to Kentucky Bourbon, and many of them even made the trek to Kentucky to check out the Kentucky Bourbon Trail as a result.

“We bottled it and we did a pre-release with a, I like to call it a big hootenanny at Bardstown Bourbon Company,” Phifer Pavitt says, “It was the first big event… and 100 of our clients on my mailing list made the trek, 95 per cent of whom had never even been to Kentucky, let alone the Bourbon Trail. We’re all wine drinkers who were along for the experience, and we attracted and converted a lot of people who are now big Bourbon fans.”

Wine Country has been a tourist destination for decades, but threats from pests and wildfires necessitating diversification as well as the growing popularity of distilled spirits has opened up the area for distilleries and the distilled spirits tourism that comes along with it.

“I would say from my experience, you’re either a true spirits drinker or you’re not, so it’s usually someone in the wine group is like, oh hey, down the street is Spirit Works, and let’s just swing by there so I can get a taste of whiskey,” says Spirit Works Distillery head distiller Krystal Goulart.

“Wine Country will always be a popular destination for tourists,” Mandro says. “More than 23 million people visit wine regions in California each year. The addition of spirits enhances these areas and makes them a one-stop tourism destination for those seeking spectacular wines, premium spirits, and fantastic food. It becomes the epicenter, so why go anywhere else, when you can get it all in Wine Country?”

“Here at Spirit Works we have an ethos of sustainability,” Goulart says. “We’re grain-to-glass, and we work with local farmers and local grain sourcing. I feel that you can really get a sense of terroir and the whiskeys we make because we want to highlight the grain itself and the flavor profile.”

Goulart, who went to school for viticulture and worked in wineries before learning distillation and making whiskey, explains that Spirit Works’ location in Wine Country makes it easy to get needed supplies and equipment, and there’s even a camaraderie among the beverage alcohol producers in the region that plays out in the ability to borrow forklifts or get help from other producers that is very similar to what has been seen in the Kentucky Bourbon industry for decades.

“The area we work in is in a maker’s district in Sebastopol, and there are wineries that we share parking lots with, and so there have been times where I’ve used their forklifts,” Goulart says. “I’ve asked to use their forklifts or some of their equipment because I would say equipment is quite similar between wineries and distilleries. So there’s definitely a sense of community there.”

As with most things in whiskey, it usually starts with a passion for learning and experiencing new things and quickly evolves into making beverage alcohol.

“I come from a family who loves to travel, and so my grandparents and my father and neighbors were always farming and making wine and they were making moonshine,” Goulart recalls of her own journey. “I would say I grew up with an adventurous spirit and also a love for community and sharing at the table. I grew up not far from Wine Country, and then travelled internationally, did some harvest abroad, then started working locally. I guess when I was in wine, I was always intrigued with the varietals and not just making still wine, but I worked at a port house for seven months in Portugal, and then I worked at a Champagne house in Petaluma in Sonoma County, and learned how to make Champagne. I’ve always just been intrigued by fermentation science in general, and the food and beverage industry.”

During the last several decades, the Northern California wine regions have been world-renowned for their wines. Now the region is fast becoming a hot spot for American whiskey production, as well.

“The women who are part of our Wine Country Women business are luminaries, tastemakers and entrepreneurs in the beverage and culinary industries,” says Mandro. “Their priority will always be on wine, but expanding their portfolios affords them the opportunity to offer some unique products to their best customers. The percentage of spirits being made in Wine Country is small, but growing. Those venturing into this area are creating small batch premium products. Those producing Bourbons make them in Kentucky, where those of us with roots there will tell you it is the only place to make great Bourbon.”

2 comments on “Wine Country Women going from grape to grain”