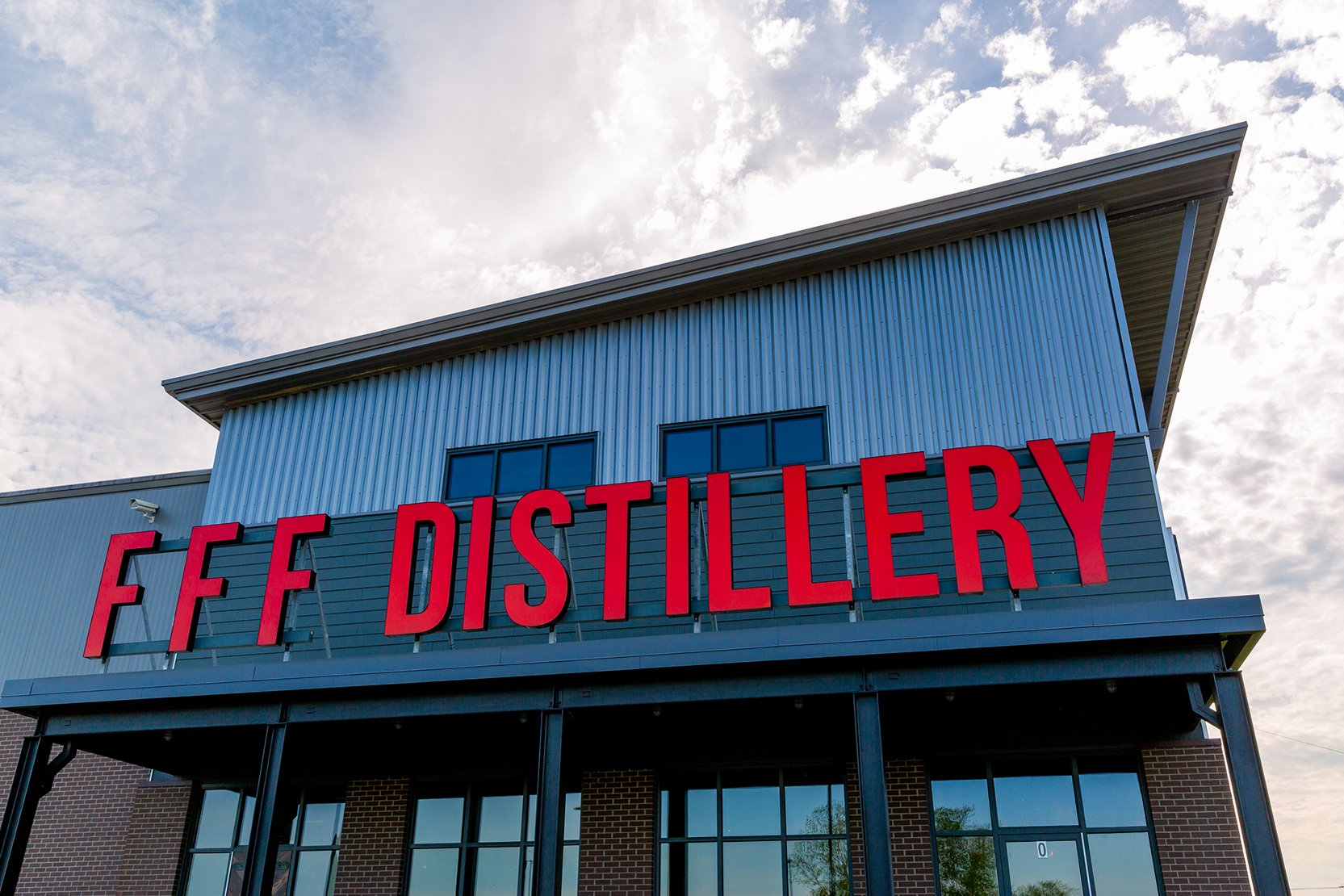 When it comes to whiskey, you don’t have to like or even know the person that makes it to enjoy the liquid in the bottle. However, considering the depths of the full sensory overload that is tasting whiskey, knowing the story, from distiller to bottle, will inevitably immerse you even further. Who wouldn’t want that?

Three Floyds Distilling came to my attention slightly out of left field; by that I mean I stumbled across the brand’s vice president and head distiller, Abby Titcomb, on Instagram. As many people do in this hyper-connected world we live in today, we struck up a conversation around the water of life which left me intrigued as to what this distiller would be putting out in to the world. Would it be packing a punch? No doubt. Would the flavors be enticing? Absolutely. Would the process be intriguing? Oh yeah. Would it be normal? Not a chance.

Before stepping further in to this deep-dive of ‘not normal’ whiskey, it’s important to clarify that statement is by no means a damming indictment of Three Floyds whiskey; if anything, it is the ultimate compliment. One of the first things I learned about the world of whiskey was that there was something for everyone; although there are designations and rules to abide by, there is no ‘one whiskey taste profile to rule them all’. Well, it depends who you ask but that is a battle for another day. So, with that in mind it is exciting to witness and discover more about the experimentation on offer at this distillery based in Munster, Indiana.

The ‘not normal’ part of this story comes from the brand itself and is almost as old as Three Floyds. The aforementioned has been a brewery for a quarter of a century, founded by Nick Floyd in 1996. At that point it was a small operation started out of his garage in Hammond, Indiana; by home brewing, Nick was able to build up enough capital to get things off the ground. The three Floyds behind the name are Nick, his father, and brother, and although the latter two are no longer involved it still has the feeling of a family affair.

“In the beginning he would say that he had customers and clients and accounts sending back kegs saying, ‘No this is too bitter, it’s gone bad, it’s not the right beer, it’s not normal.’ That’s where that came from and we kind of adopted it. It is kind of like an extension of Nick’s personality and who he was. And if you were to ask him today he would not expect that we’d have made it this far and have been as successful.”

In 2010 Abby was hired as a brewer, where she made beer for five and a half years for the brand. Originally from Northern Wisconsin, Abby moved to Minnesota at 18 and started bartending her way through art school. Although at the time it seemed a means to an end, her time in this “very ‘working man’s’ bar,” would be a catalyst to her discovery of brewing and distilling as a career.

“I started getting into drinking craft beer when I was around 21 and at that point I was getting sick of art school and thinking, you know what, this might not be for me,” explains Abby. “I was a full-time bartender for a while… at that point I’d moved to Chicago and Chicago bars are open until 4am, and 5am on Saturdays. It just got brutal and I got sick of people and I noticed my personality changing. I was becoming a cynical, bitter bartender and I didn’t want to become that person. I knew I wanted to make something, because I still have the creative drive, but I just didn’t know where that was going to go.”

A dinner with friends brought the moment of realization for Abby. As she was drinking a good craft beer the inspiration struck and two weeks later she had signed up for brewing school. Then a chance encounter brought her dream to fruition, “It would be dumb of me not to recognize the timing too, you know, timing is everything… I was just out with one of my girlfriends one night and went to go visit one of her friends who was a bartender, we started talking about beer with him and then I had said I just graduated from brewing school… and he was like, ‘I work at the pub at Three Floyds actually’. At that point I was pretty sceptical of him… but he showed up the next day to my job and actually picked up my resume.”

To begin with Abby was building boxes and popping open six packs to put in the beer cases. She continues, “Nick knew I went to brewing school and at that point he was still physically brewing.”

Due to a combination of the growth of the company and the physicality of brewing, Nick needed to find his replacement and he turned to Abby. “At that first conversation I had with him, he had brought up a distillery too and said, ‘What do you think, do you drink whiskey?’ I said duh, yeah of course. And he was like, ‘How would you feel about a distillery in the future?’ … so that was that.”

The distillery project began in 2015 and the team decided to continue with its ‘not normal’ identity in all aspects. The Three Floyds stills are made from old stainless steel dairy farm vats; Nick discovered them online at a farm that was selling off a lot of its equipment. Abby explains, “We have got a lot of our equipment from farms because it is completely useful and we can just retrofit and customize it. We got these two bellies basically… and then we decided to do the distillery and send them down to Vendome, and they sent us back these really beautiful frankensteined stills. You know we do everything custom, I suppose.”

Although the team are brewers first, they’re also all big whiskey drinkers and wanted to begin by developing a whiskey portfolio to highlight that love.

“I’m a huge whiskey drinker and that’s where it started, then the other spirits developed out of necessity because everything is resting, all of this whiskey is resting right, so we’ve got to get some money in somehow,” Abby says matter-of-factly. “Initially and ideally I would love to be a whiskey distillery, you know I want to be known for our whiskeys obviously, but it’s just kind of a happy accident with the other spirits too.”

Considering the relatively short amount of time, in whiskey-making terms, that the team has been distilling, it has created quite the impressive selection for whiskey lovers to try. At present this selection includes Divine Rite White, with that exact mash bill at two years old, and the oldest barrel of that is three years old for Divine Rite Barrel-Aged. There is also an Indiana Single Malt in the mix; not a TTB single malt, but a literal single malt whiskey.

One of the brewery’s top beers is called Gumballhead, considered by Abby to be its flagship and gateway beer to Three Floyds. With that in mind she has been experimenting, “I made a mash bill out of the Gumballhead and adjusted it for whiskey; there is no hops in there or anything, so we have a Gumballhead whiskey coming out.”

Plans continue to develop, with a 51 per cent wheat whiskey in the mix and one very precious single barrel of rye. Abby explains the eventful process that brought this special barrel to fruition, “Rye is such a bully to work with. It’s hyper sticky. I wanted to make three tanks of the wash and that would give us maybe 12 barrels or something. But rye is so sticky, especially if you lauter it, we just had to stop that at 36 hours and I got one half of one tank of wash. That yielded a single barrel of rye whiskey. It was a nightmare, so that barrel is just going to sit for a while and it is going to be a special thing.”

With the continued growth of Three Floyds’ whiskey portfolio in particular, the team is growing to support this. Now under Abby’s wing is Meghan Fritz, who she refers to as “a distiller in training, as well as an all-round badass.” Three Floyds is the perfect combination of creativity and skill, embracing challenges but also keeping us on our toes. What will be the next surprise? Who knows, but it certainly won’t be normal and I’m excited to get my hands on it.

0 comments on “Three Floyds Distilling is altering the ‘norm’”