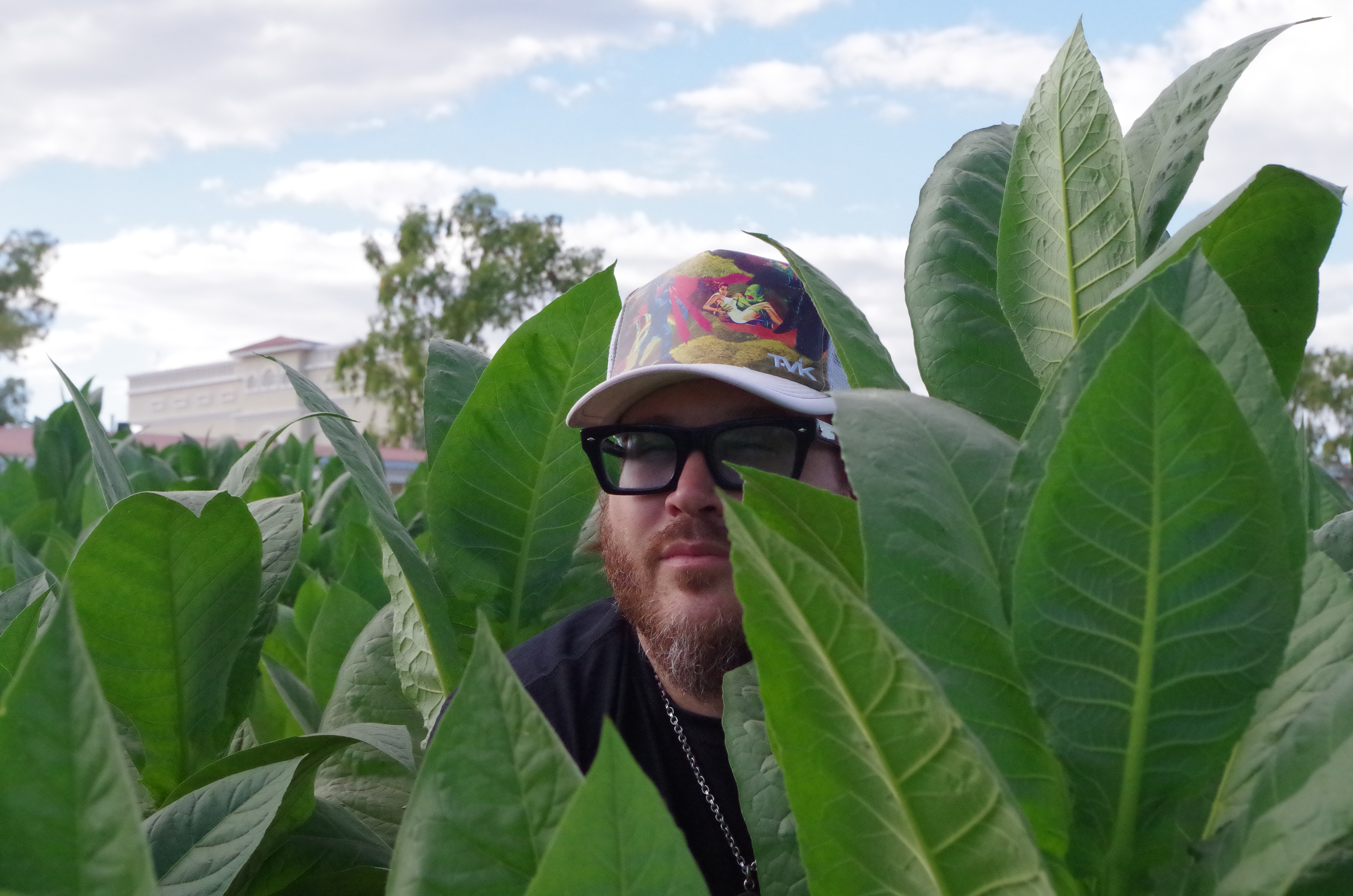 Jonathan Drew, known to friends and fans as JD, is the founder of Drew Estate Cigars. He started as an enthusiast, and his career has spanned from retailer to distributor to starting his own cigar manufacturing company, Drew Estate, where he remains president today.

“I went from owning my own cigar shop, to moving to Nicaragua a few years following the end of the Sandinista-Contra War,” recalls Drew. “I had visited this beautiful country numerous times as a retailer, way before most Americans were venturing to Nicaragua. In 1998, I made the difficult decision to leave my family, my friends, Brooklyn and Manhattan, and move to this war-torn country with only $1,700 in my pocket. This was really that ‘aha’ moment. It was a deep dive into the unknown, and a journey into a war-torn country that was recovering from a major crisis. But I deeply wanted to be at the root of manufacturing handmade cigars, so I made the decision to devote my life to living in Nicaragua and opening our own factory.”

During those early days in Nicaragua, JD slept on the factory floor while he was trying to get his brand off the ground.

“We started with six people plus myself. There was no money, we were totally living on the edge with just enough cash to eat,” he recalls. “Options for where to stay were limited. Our factory was basically a little green house.”

Drew spent the next several years becoming an integral fixture of the community in Nicaragua, being lovingly referred to by locals as “el Gringo Loco.” He watched tourists begin to visit the country from across the world as he continued to build the Drew Estate brand and factory, creating jobs for people in the town of Esteli. “It really transcended cigars,” he says.

Drew adds, “I’m really proud to have had the opportunity to influence graffiti art in Central America. Nicaragua has another cultural criollo style of art that has a completely different flavor, and we mix the two worlds.”

Today, in addition to his role as president of Drew Estate, Drew also plans to open a bar in October called “The Wynwood” in his neighborhood of Wynwood, Miami.

For those who have not tried Drew Estate, Drew mentions that adult smokers may want to try ‘Pappy Van Winkle Barrel Fermented by Drew Estate’ and the ‘Kentucky Fire Cured’ cigar brands, as these brands have deep connections to the world of brown spirits.

“We roughly make as much as 41 per cent of what’s made in the entire country of Cuba on a daily basis,” says Drew. “When you think of the massive size and scale, a total leviathan of a cigar manufacturing hub… we’ve also managed to keep our roots, keep the art, keep the New York vibe… we’ve not lost our soul. This makes me really happy.”

The Liga Privada 10 Anniversario was created to commemorate a decade of the Liga Privada line of Drew Estate Cigars, one of the most premium lines that has been created by the Drew Estate team. It’s a 6 x 52 toro with a Connecticut River Valley criollo-seed wrapper, a Mexican San Andres negro binder, and Honduran and Nicaraguan fillers. It has a braided pigtail cap and an unfinished foot. It has strong notes of dark chocolate and a vegetal celery root note. When paired with the Larceny Barrel Proof B520, the Bourbon is able to perfectly bring out the chocolate notes, placing them directly at the forefront, while the cigar highlights a buttery fresh leather note in the Bourbon.

The Liga Privada H99 was a new addition to the Liga Privada line in 2019. It’s a 6 x 52 toro with a Connecticut River Valley criollo-seed wrapper, a Mexican San Andres negro binder, and Honduran and Nicaraguan fillers, but unlike the very similar Anniversario the foot is finished and the cap is smooth. Despite the use of similar tobaccos, the notes in this cigar are slightly different – you will notice that it’s very earthy with mesquite notes and a hint of evergreen. When paired with the Redemption Rum Cask Finished Rye, the cigar brings out cinnamon candy notes in the whiskey, while the whiskey then brings out faint white pepper and highlights the evergreen notes in the cigar.

This Padilla Series 1968 commemorates the year that Herberto Padilla, the manufacturer’s father, was jailed for publishing works critical of Fidel Castro. This 5 x 50 features a Nicaraguan Corojo wrapper and Nicaraguan Criollo and Corojo long-fillers. It is made in Honduras. It’s earthy and mineral with a hint of white pepper and also some vegetal green pepper, and the flavor profile changes nicely throughout the smoke. When paired with the Westward Pinot Cask-Finished American Single Malt, the cigar brings out freshly baked dark cherry pie filling notes in the whiskey, while the whiskey then brings out delightfully light, creamy milk chocolate and vanilla notes in the cigar.

The Caldwell Cigar Company was founded by Robert Caldwell in 2014 with the philosophy of creativity, ambition, and innovation. The Caldwell Eastern Standard is a 5 x 50 and has a natural shade wrapper, though the wrapper, binder, and filler types are not disclosed by the manufacturer. Predominant notes are cafe au lait, milk chocolate, and a touch of black pepper. When paired with the Cooper’s Craft Barrel Reserve Bourbon, the cigar brings out heavy but not overpowering cinnamon notes with a punctuation of candied cherries. The whiskey brings the milk chocolate notes to the forefront and deadens the black pepper notes.

If you are looking for a cigar bar that is big on character, this is the spot. Dusty, leather-bound books adorn the far wall reserved section full of banquettes and large tables. Smaller tables line the wall opposite the grand bar of this narrow space, and window seats flank either side of the front door. There is also sidewalk seating for good weather. The menu includes food, wines, rums, brandies, and armagnacs. The whisk(e)y menu is broken up by regions with offerings from Scotland, Ireland, Japan, World, and Americas. The Americas list is further divided by Bourbons, ryes, Tennessee whiskeys, and Canadian whiskeys. Cocktails are also available.The small but well-chosen cigar menu includes a selection of house-label cigars as well as selections from Arturo Fuente, Avo, Romeo Y Julieta, H. Upmann, and more. This is a hip place in a hip neighborhood with vintage colonial decor – a cozy West Village spot that packs a lot of options into a tiny amount of space.

You won’t find the largest selection or the fanciest merchandise here, but what you will find is a solid selection of hand-picked cigars ranging from La Aroma De Cuba to Arturo Fuente to Patron to Drew Estate, everything from boutique to readily available. There’s no walk-in humidor at this tiny shop, but there are multiple cabinets lining the main retail shop area. Thanks to some particular smoking laws there’s no smoking in the shop, but a short corridor leads to the owner’s personal garage, which has been nicknamed the ‘Dude Daycare’ – and dudes of all genders are welcome. In the area there are breweries, restaurants, and bars, making this a great stop on a day of brewery tours and world-class food. This neighborhood is a great place to spend a Saturday afternoon walking around to shops, trying new foods, sitting in beer gardens, visiting the picturesque Washington Park, and more, and this cigar shop is a great place to take a break from all of that.