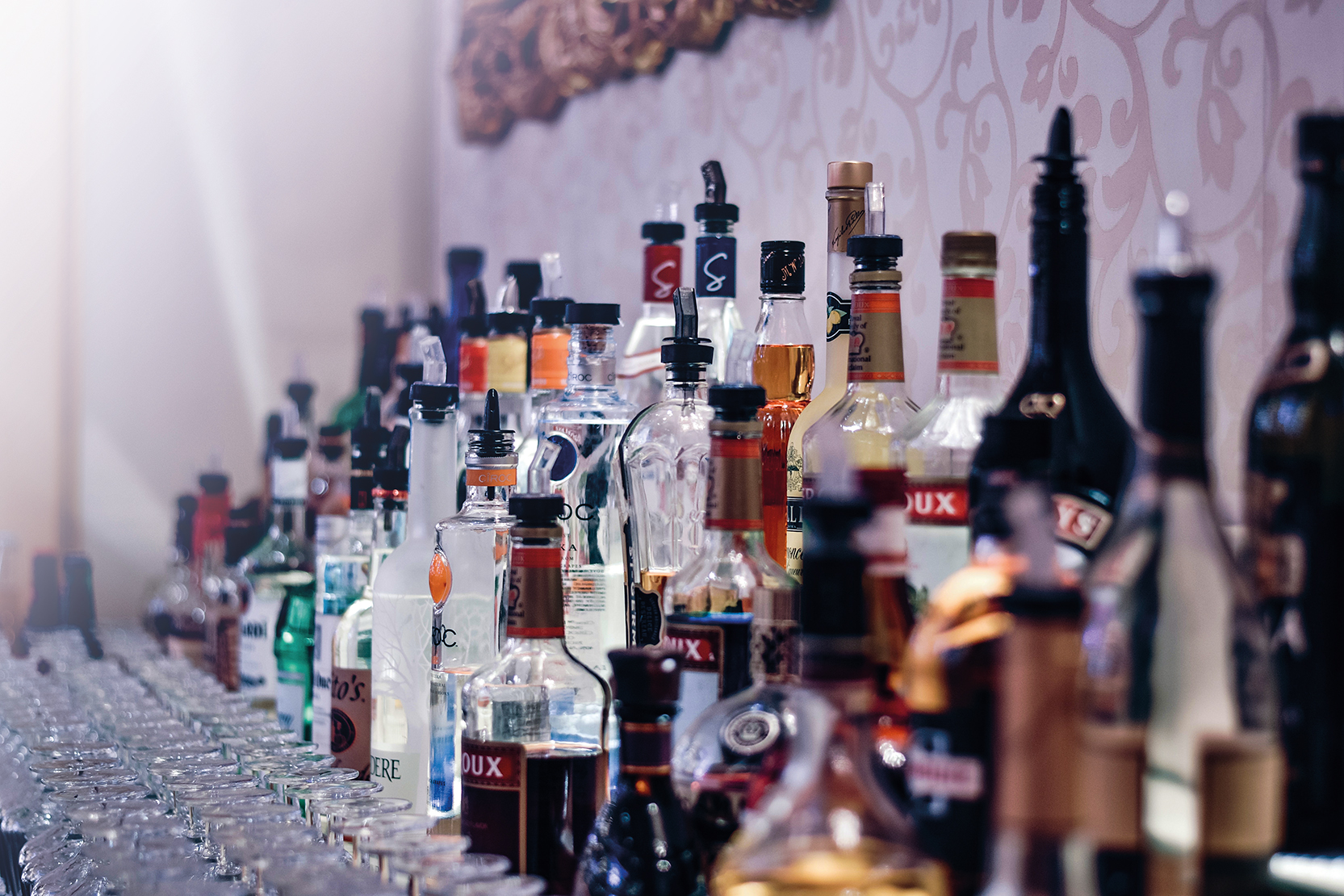 Understanding bitters and how you can up your cocktail game

Bitters are the spice cabinet for your cocktail experiments. They are made by infusing some sort of liquid, usually grain alcohol, with a variety of flavoring agents including herbs, spices, and citrus. For the last several decades Angostura has ruled the landscape, but thanks to the craft spirits and subsequent craft cocktail boom now you can get bitters ranging from Scrappy’s celery bitters to El Guapo bitters Low Country Boil.

Bourbon Barrel Foods makes Woodford Reserve Spiced Cherry bitters, which are fabulous in a Manhattan. Try orange bitters in an Old Fashioned, or chocolate bitters in a Mint Julep. There are endless possibilities, and one of the greatest gifts I’ve received was carte blanche to throw whatever unknown bitters I reached for into an Old Fashioned during a virtual cocktail class with Scrappy’s Bitters, hosted by Andrew Bohrer.

“You’re not gonna ruin things, it’s something that you just make an experiment with,” says Bohrer, who is a writer, bartender, and cocktail historian.

“The history of bitters,” continues Bohrer, “is mostly as medicine or patent medicine, and I’ve had a few old weird recreations of patent medicine bitters. They’re odd, maybe they settle your stomach a little bit, maybe they don’t, but it’s my understanding that most kinds of patent medicine were so high proof anyway that it definitely would treat some symptoms. That’s why so many bitters ceased to exist after the Pure Food and Drug Act in 1906.”

Bohrer explains that even as early as the 1860s bitters were wide ranging, but as they made medical claims they were largely put out of business, first by the Pure Food and Drug Act and later by Prohibition.

In fact, some bitters during that time switched their bases to glycerine to get around the alcohol ban.

“In the 50s and 60s, Angostura started doing a huge push in America to try to bring back Angostura as a central cocktail ingredient and it kind of all grows from there,” says Bohrer.

For decades, the running joke among bartenders was what will last longer, your relationship or your bottle of Angostura? But then the craft spirits boom gave rise to the craft cocktail boom and suddenly different kinds of bitters became prolific again.

“When I first started my bar journey, I was in a bar where the most we touched the bitters bottle was to clean it every week because it sat next to Rose’s Grenadine and got sticky,” says Smart Guy In A Tie mixologist Brian Petro. “I was not using bitters for a long time until I started doing my own research on cocktails. For me, it was one of those ‘why was I not always using these’ moments. After that, I started to grab any flavor I could that I thought would help. Some did, like the orange bitters we added when they first came out, and some did not, like the mint bitters we tried in a Mojito.”

When it comes to new or unusual flavors of bitters, experimentation is key. Get comfortable with potentially making something undrinkable and then watch the magic happen.

“My house now has every flavor of bitters I can get my hands on for experimentation,” Petro says. “When I set up a bar, even for events, part of what I gather are bitters for different cocktails. I know I am a little behind, but the next step is making my own. The difference that bitters can make in a cocktail is incredible. It can round some rough edges and change what flavors come out. Making the same cocktail with the same basic ingredients, but just playing with the bitters can make a huge difference.”

“There’s the cliché, and clichés are functional for a reason, that it’s the salt and pepper, the seasoning of cocktails,” says Bohrer, “but I also think that it’s much more in that it’s the accent on cocktails. Bitters are such a joy for very pedestrian spirits. Playing with bitters with a really straightforward spirit lets it shine by contrast, while younger or more heavily wooded or tannic whiskeys that might be more popular with bartenders and these days, bitters don’t really show up as much there. I definitely like bitters for aromatics, bitters carry a lot of aromatics that don’t necessarily taste that great or are not water-soluble as in, they don’t really have much of a flavor at all. Bitters will punctuate with flavors, so you kind of add that little bit of actual literal bitterness and it will clean up the palate.”

There are a lot of ways to get balance in cocktails, and adding bitter elements to sweet elements is key.

“We often consider bitters non-potable, a flavor element to add to cocktails, not consumed on their own,” says Bourbon Women chair of the board Heather Wibbels, also known as The Cocktail Contessa. “But Italians have mastered a class of herb- and botanical-infused spirits called amari (plural, amaro is singular). Think of Campari and Averna as great models of this kind of spirit. I’ll often use amaro in a whiskey cocktail to punch down the sweetness of the base spirit and add another layer of complexity.”

“When I think of bitters-forward,” Bohrer says, “I’m thinking blending types of bitters or going beyond that two-dash thing. I think that would this be just as well done with an amaro or a liqueur or something like that.”

Bohrer says he’s continually impressed by bartenders who utilize bitters in a way that highlights a delicate aromatic note, but that it’s also not unusual for him to break the barrier of eight or more dashes in a single cocktail. While he doesn’t use atomizers much himself for bitters, he notes both that some people do use them for that and that atomizers are also a great way to use non-bittering agents, such as smoky Scotches or absinthes, in a way that can mimic bitters.

There are as many different ways to use bitters as there are bartenders and mixologists and home enthusiasts. Throwing in a bunch of different types of bitters can change up a tired old cocktail, while trying something out of the ordinary can lead to a new favorite. And don’t forget the Trinidad Sour when you are starting to experiment with different bitters-forward cocktails. Bitters are the spice of cocktail life – you never know what you may come up with.

Pour all the ingredients except for the ginger ale into a shaking tin over ice. Shake well for up to 10 seconds and strain into the rocks glass over fresh ice. Top off with the ginger ale, garnish with the lime and serve.

I created the cocktail for my usual phrase after I kvetch about something bothering me, ‘But I’m not bitter.’ For this bitter-forward whiskey cocktail, a chocolatey, bitter amaro, Averna, is paired with peppery rye and bolstered by the spices of the chai infusion, including cinnamon, nutmeg, ginger, peppercorn, allspice, and clove. It’s a layered cocktail that changes as you sip and it slowly dilutes over ice.

Combine all of the ingredients in a mixing glass and add ice. Stir this together well until the components are chilled and well combined. Strain into a rocks glass with one large cube. Garnish with orange slice, cinnamon stick, and star anise.

Add the ginger beer and spices to a small saucepan and set to a low boil (be sure that you keep a close watch to make sure it doesn’t boil over due to the carbonation in the soda). Let it reduce to half – which should take about 45 minutes, stirring occasionally. Add the half cup of sugar, mix and let cool completely. Strain and pour into a clean jar. Store in the fridge.

0 comments on “The bitters guide to cocktails”