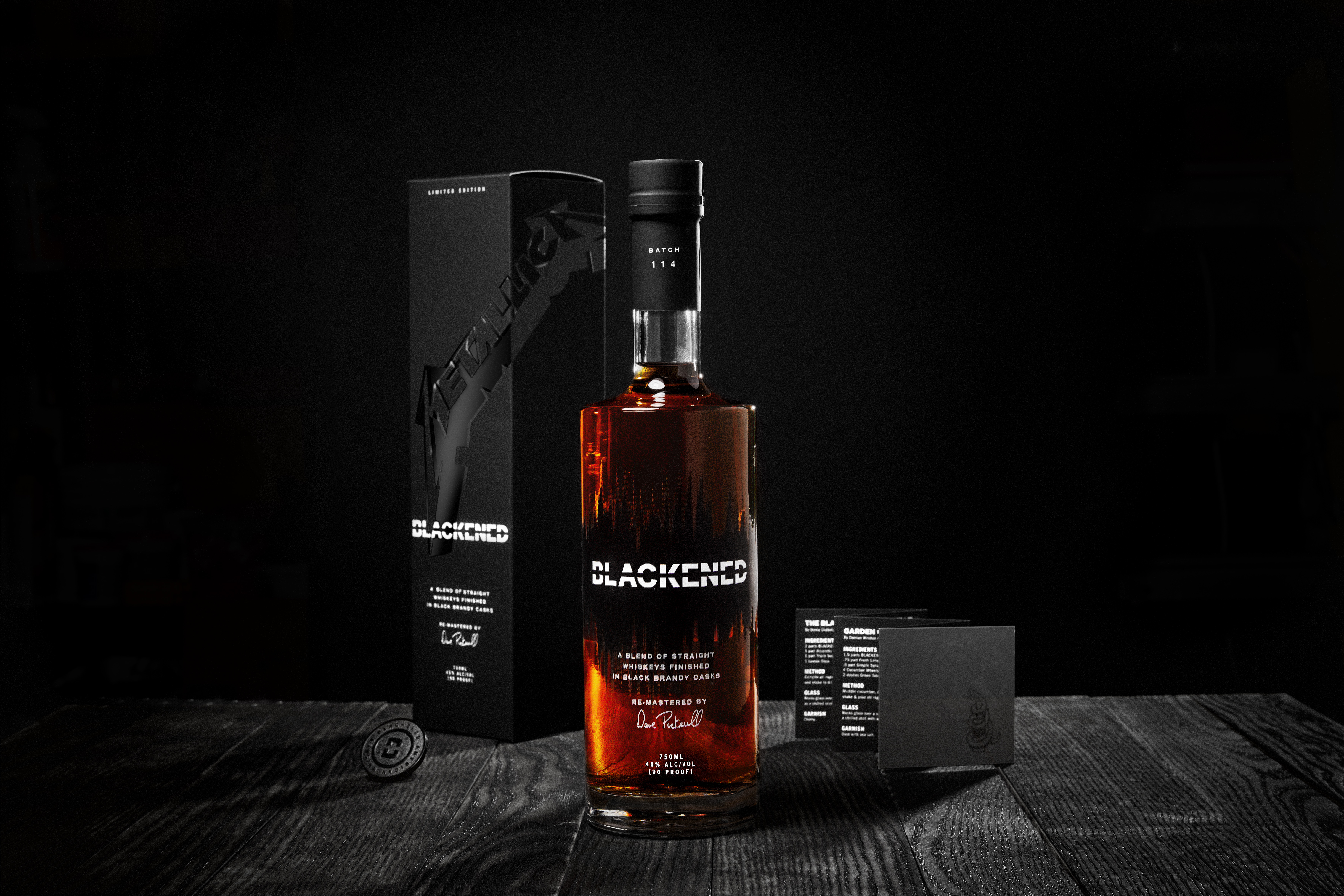 Blackened American Whiskey has announced the release of its limited-edition The Black Album Whiskey Pack, honouring Metallica’s self-titled album that is widely known as The Black Album.

For whiskey fans and Metallica enthusiasts alike, this has been created as a true collector’s item, featuring a 750ml bottle of Batch 114 finished with Blackened’s Black Noise sonic-enhancement process, tuned to the songs on The Black Album.

The pack also includes a collectible whiskey coin and the Snakebyte Cocktail Booklet, featuring riffs of the classic whiskey ‘Snake Bite’ drink created by some of today’s rock star bartenders from across the country, and named after James Hetfield’s Signature ESP Snakebyte Guitar. Now available at retailers in select markets and nationwide on BlackenedWhiskey.com.

Blackened was launched in 2018, created through the collaboration between Metallica and the late master distiller Dave Pickerell. The whiskey itself is created from a blend of straight Bourbons and ryes, all of which have been aged for an average of eight or more years, finished in black brandy casks and to the low hertz frequencies of Metallica’s music. The low frequencies pummel the whiskey inside the barrels, causing greater interaction between the whiskey and the wood, extracting more flavors and color from the finishing barrel.

In June of 2019, master distiller and blender Rob Dietrich joined the fold after the passing of Pickerell, overseeing the sourcing, blending, and cask finishing of barrels for each batch.

Originally released on August 12, 1991, The Black Album is the highest selling album of any genre in the last 30 years with over 17 million copies sold in the US and 35 million copies sold worldwide. The Black Album Whiskey Pack pays tribute to this celebrated album from music to cover, with the entire album featured as the finishing playlist, and the packaging and components all inspired by the album cover known the world over.

“So many things changed for us externally after The Black Album release,” said Metallica co-founder, vocalist, and guitarist, James Hetfield. “The perception of the importance of Metallica changed greatly. Obviously with songs like ‘Sandman,’ ‘Unforgiven,’ ‘Nothing Else Matters’ becoming embraced by a lot of the world, we became a household name. It changed our lives and hopefully helped the world connect.”

The playlist features all 12 tracks from the album:

“The Black Album was one of the first albums that I truly took up as a personal anthem. It is such a bada** record and it carried me and my buddies through some intense times during our military deployments in the early ’90s and beyond,” said Blackened master distiller and blender, Rob Dietrich. “Just like the record, The Black Album Whiskey Pack’s Batch 114 has been masterfully crafted and is heavy-hitting and well-balanced, with buttery caramel and oak on first sip, rolling through notes of apricot and almond, followed by an earthy chipotle, walnut, and maple finish. So good! Now it’s time to sip a little whiskey, throw this record on the turntable, and crank it until the windows blow out!”

The pack is available to purchase on BlackenedWhiskey.com, Caskcartel.com, Craftshack.com, Reservebar.com, and SpiritedGifts.com as well as local retailers in select markets.