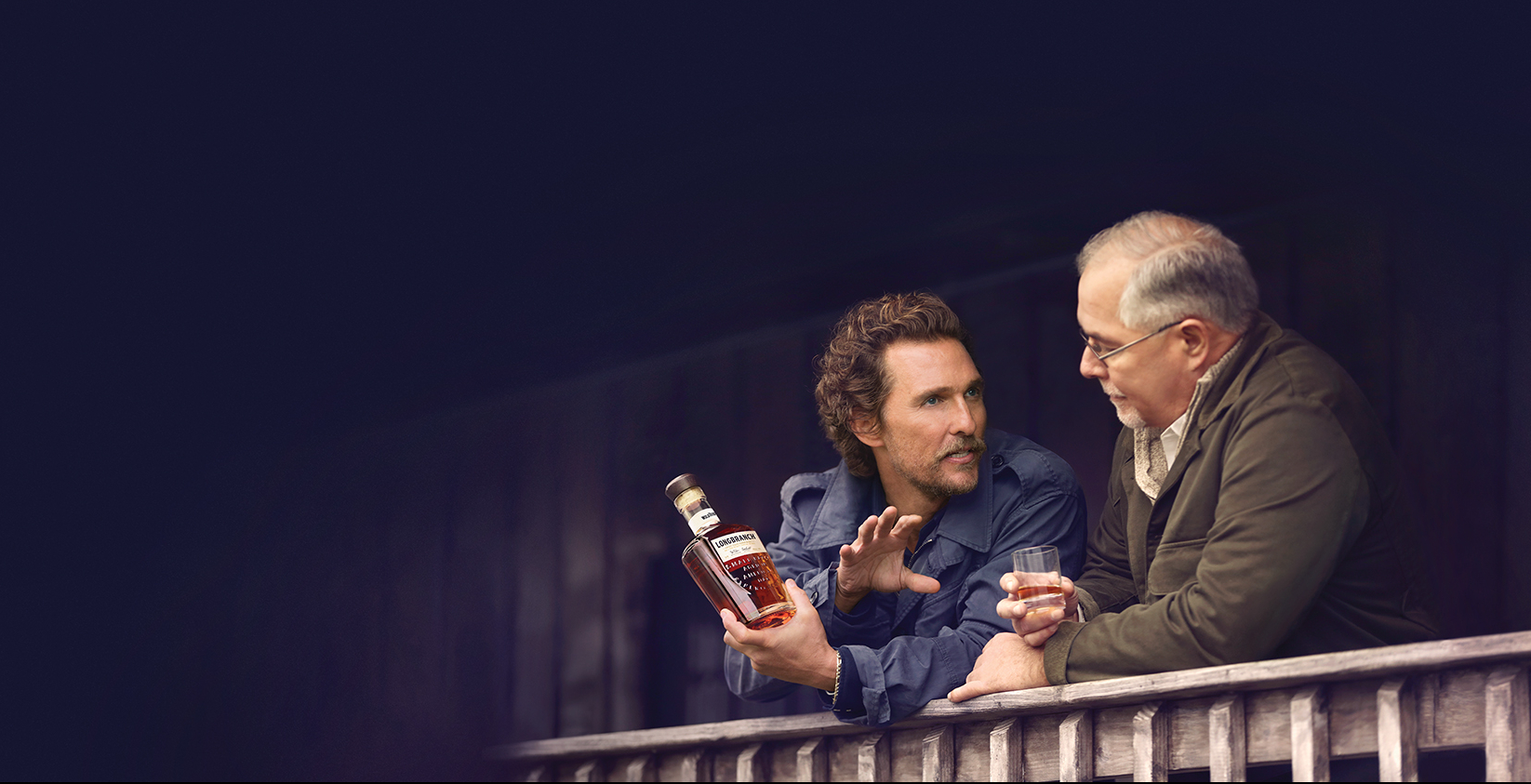 In a world where you can be anything, Wild Turkey’s Eddie Russell and Matthew McConaughey encourage you to trust your spirit

It’s incredibly difficult to emit genuine warmth of feeling through a 15-inch computer screen, especially when digital conversation forms the vast majority of our days; but for 50-or-so minutes one April evening this year my thoughts on that were proven wrong.

As a writer with a real sense of over-romanticism when it comes to story-telling, I’ve always been keen to take a look at the relationships that paint the full picture behind the brands we see across all industries. Not that I’m biased, but whiskey seems to provide rich tapestries when it comes to relationships, and as I discovered when in conversation with Wild Turkey’s master distiller and creative director, this star-studded team is no different.

The aforementioned roles belong to Eddie Russell and Matthew McConaughey respectively and since 2016, when Matthew stepped into a very different role to that for which he has become globally renowned, and entered the Wild Turkey fold, the pair have forged their own rather individual and effective way of collaborating.

It’s hard not to be cynical in the modern world we live in, but some folk assume that with a ‘celebrity partnership’ it is all about the name; and yes, perhaps in some cases this is true, but you’ll find no judgement or signs of that here. It’s all family.

For Eddie, who is the son of master distiller Jimmy Russell and has just celebrated 40 years at Wild Turkey, this distillery is home. He explains, “For us at Wild Turkey it was all about my father and how he’d stayed true to his craft. When Matthew came on board… he was all about the family, which is huge for us. He believed in us and he believed in Wild Turkey and what we were doing, so it just made it pretty easy, you know… he came in and everyone was sort of intimidated, and for me it was sort of about sitting back and waiting to see.”

Matthew interjects, “Eddie was not intimidated, Eddie was doing exactly what he was saying, and his dad sure as hell wasn’t intimidated. Eddie was in the background, going in with the trusting eye and ‘let me just watch and listen here’ approach.”

He was all about the family, which is huge for us

It’s easy to see the genuine camaraderie between the two as Eddie adds, “That’s what it was all about, having somebody that really fit, that knew what our company was all about, what my father had been about for 50 years and that was being genuine family and all those things that Matthew stands for.”

As the youngest of the three Russell children, Eddie joined the Lawrenceburg-based distillery on June 5, 1981, working his way up from the lowest rung of the ladder to the moment in January 2015 when he stepped up as master distiller. It was around a year later that a few conversations with Matthew led to an idea; although he had joined the team to work on the Wild Turkey brand specifically, conversation between the two creators set off a whiskey spark.

Matthew explains, “Longbranch, where Eddie and I came together, was a little sort of backroom secret that he and I had, we were kind of waiting and discussing… So the recipe was coming together before we ever started talking about a recipe, I’d say.”

It was at that moment that the two had found the perfect way to marry Texas and Kentucky, both bringing ideas and little pieces of home. Eddie builds on this, “You know when I think about Texas I think everything’s bigger, I think about great brisket that’s smoked with that mesquite wood; it seemed a natural thing and something that nobody had used. At first we talked about a charcoal filter but that’s not really what we do; we use the charcoal to sort of impart flavors. It took more than two years, I forget how many samples I sent over to Matthew…”

Luckily for us Matthew had a very vivid memory of the lengthy sampling process, “A bunch, a bunch of ‘em… I’d save tasting them for the Friday night and get the campfire going, put the kids to bed, and I’d go now let’s pull it out. I’d try it and take some notes and draw pictures.

“And then I suppose I’d leave Eddie some messages sometimes that weren’t in between 9 to 5.” The two share a knowing laugh at this. “I remember asking this because I was a bit intimidated, I said ‘is there a vernacular or a nomenclature that I’m supposed to talk to you about this?’ And Eddie was like, it’s Bourbon.” Simple as.

The two were able to discover their own rhythm in the process of creating Longbranch – quite literally. Through his love of music, Matthew found that there was no better way to explain the sensations in his mouth than through ‘talking music’. As he explains, “So I’m talking about bass and treble, and this and that, and we just talked musically. It didn’t have to make complete literate sense, but he [Eddie] would pick up exactly what I was talking about, come back, try something else, then send back four more samples.”

Of course, there were lessons to be learned along the way and as the two back-and-forth about their time working on creating Longbranch, Eddie chuckles, “I’m not musically inclined at all but I understood exactly what he was saying and each time, you know there was one time towards the end where he said, you know, if we can just throw some cane sugar in there…”

Matthew jumps in, to his own defense, “I was working in Mauritius at the time where they make all that rum!”

“But it helped me understand,” adds Eddie. “I was working with six-year-old Bourbon at that time and I switched to eight-year-old Bourbon which we didn’t actually state on the bottle at first, but I think we will down the road. You know eight-year-old is quite old for most Bourbons out there, but it helped me understand that he was looking for a little more sweetness and when it ages longer you’re going to pick up those caramel and vanilla notes.”

It took a couple of years, but the duo finally struck the perfect chord by incorporating the mesquite and, of course, the DNA of Wild Turkey with the liquid.

Matthew describes the moment he knew they’d achieved the perfect combination of Kentucky and Texas, “After a couple of years I remember exactly where I was, down on the Frio river with my wife and children around a campfire on the river where I learned to swim and I tried the sample and I went oh that’s it.”

In the years since Longbranch was first launched the team has spent time ensuring it is a firmly established brand within the Wild Turkey family. Eddie explains that from day one there was no doubt in his mind that this would work, “Texas has really jumped on board, all its big chains… and we’re really getting the word out there.”

The past 15 months or so may have put a stop to the traditional routes of getting word out to the industry through face-to-face conversations with bartenders and consumers, but that hasn’t stopped plans for growth. Eddie mentions in passing that the pair have been looking into different things that we may see down the road, “I can’t give out all my secrets, but you know we’d definitely love to see some expansion on it.”

Although Eddie and Matthew are keeping cards relatively close to their chests when it comes to plans for the future of Longbranch, the open nature of Wild Turkey ensures you can’t help but warm to the brand.

For Matthew, he knew from the word go that the story was right at their feet, the Russell family, and the best advertising they could ever have was in saying “here, have a glass”. He adds, “We want to keep serving this great juice to people who want to drink it around the world, it’s a sensual, pleasurable end product… and it’s for relaxing and drinking and being with those you love, whether that’s yourself or whether it’s a thousand friends.

“Hence where the name Longbranch came from, it’s a bit of a metaphor for the Russell family and myself, they extended the hand and invited me in. It’s the idea that you have acquaintances that become friends, you have friends that become like family and you treat them as such.”

To my understanding now this partnership, and this brand, is all about authenticity and trusting your spirit. The latter is a play on words that Wild Turkey is moving forward to spread the good whiskey word. At the time of writing, the team were creating plans to shoot the ‘Trust Your Spirit’ campaign in a Covid-safe manner, but I have no doubt it’ll be a classic delivered in that wholesome Southern drawl we all know well.

Matthew elaborates, “It’s another branch off the trunk of ‘be authentic’… a reminder of things we’ve been saying this entire time, in a world where you’re hearing all these different things you can be or do. You don’t know what the hell the truth is in the middle of that – trust your spirit, go ahead, look inside, go and look in the mirror and trust that person. And believe in that, and have the courage to do that, and that way it’s not ‘highfalutin aspirational’, it’s saying trust your spirit.”

Eddie Russell: “You know I’ll soon be finishing my 40th year, so our consumer is so different. For many years it was mainly a set drinker that didn’t care about the bottle and design. Nowadays you have to have something that catches the eye for the younger consumer. It speaks to what Matthew talked about with Longbranch. That beautiful golden colour just shines so you didn’t want a big label on it. So there’s a smaller label on there, the 101 will be prominent and we just want to make sure we keep up with the times.”