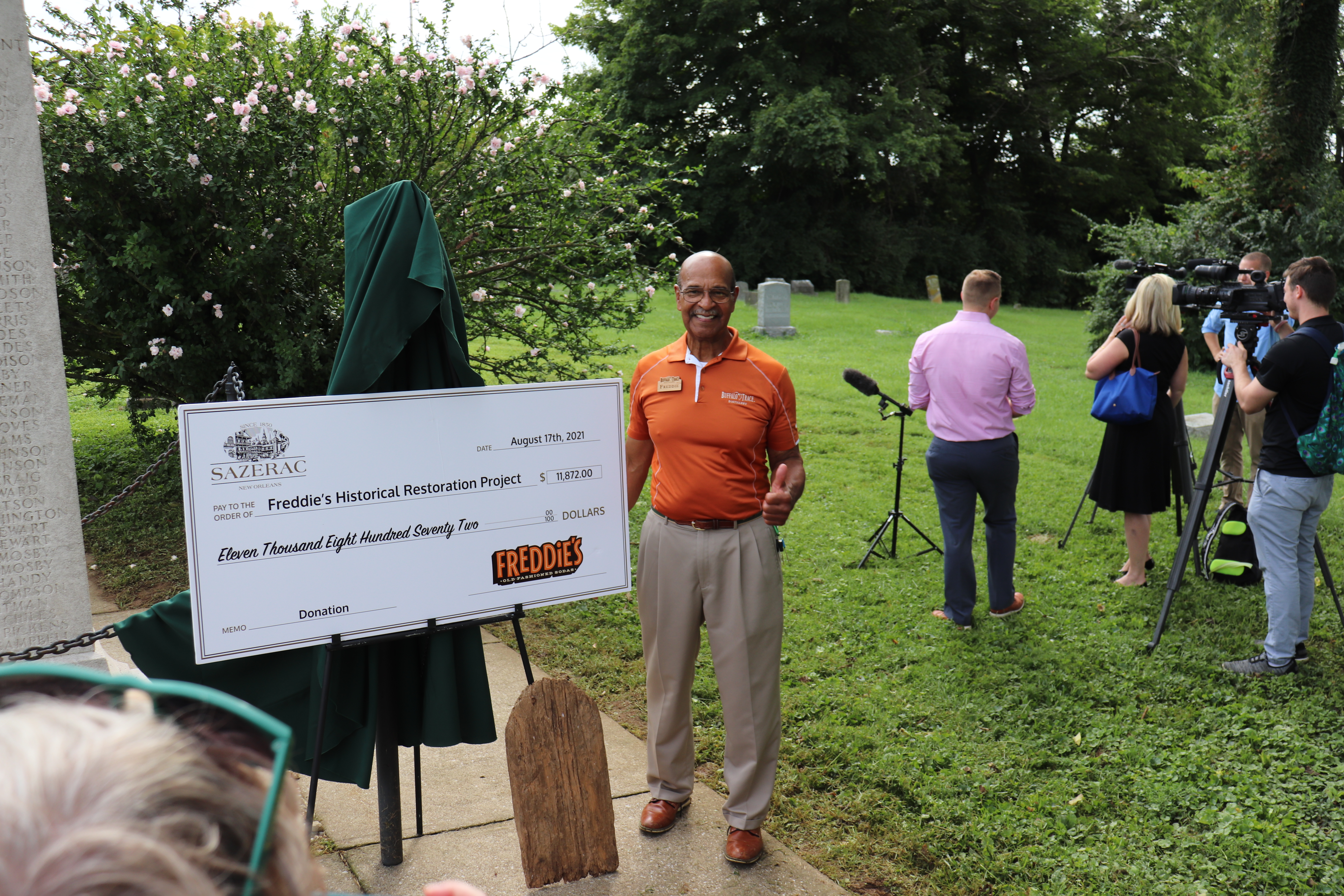 Yesterday Sazerac, the parent company of Buffalo Trace, presented the Greenhill Cemetery with a check for more than $11,000 toward the upkeep of the historic Black cemetery in Frankfort, Kentucky.

One dollar from each case of Freddie’s Old Fashioned Soda sold goes toward the Greenhill Cemetery upkeep project. Johnson sits on the cemetery’s Board of Volunteers. In previous years the Board of Volunteers would hold fundraisers at local churches and community events to raise the funds needed for the upkeep of the cemetery.

Each year the state cuts the cemetery a check for maintenance, but according to Board members that check usually runs out by mid-summer, leaving the cemetery in dire need of funds to do even the most basic things like cutting the grass, which can cost upwards of $2500 each time it is done.

Additional funding is needed to repair headstones, map the cemetery, and create a database for people to be able to find the remains of their loved ones interred there.

Volunteers from the community have come together to help with maintenance, archaeology, and even repairing gravestones, but Johnson and the other board members say that there is so much work to be done it can’t possibly be tackled by occasional volunteers and church fundraisers.

For the volunteers, it is a mission to see that the lives of the Black community members buried in Greenhill Cemetery, some of whom were buried there before the cemetery was incorporated in 1865, are properly honored.

Many of the gravestones have been damaged and are in need of repair or replacement. There are also graves that don’t have markers and need to be mapped and compared to cemetery records and local oral history from families of those interred there.

The cemetery features a monument to the United States Colored Troops from Frankfort and the surrounding area who fought during the Civil War. There are 142 names on the monument, but according to local historians more than 23,000 African American soldiers from the Commonwealth of Kentucky enlisted in the USCT.

Many members of Johnson’s own family are buried in the cemetery, including his great-grandfather, who was born before the Emancipation Proclamation took effect to an enslaved woman.

Johnson’s own father and grandfather, who both worked at Buffalo Trace Distillery, are also buried in the cemetery.

Saving the cemetery’s history is personal, and now Johnson has the power of the Bourbon industry to help him bridge the funding gap.

Soon the Board of Volunteers will embark on a project that will map the cemetery, locate lost graves, and upload findings to the internet so relatives can search for their ancestors’ graves.

As Johnson explained, for many families the history of where folks were buried was passed down through generations, but as trees have fallen, flowers have been removed to make maintenance easier, and landmarks have changed, families have forgotten where their loved ones were buried, which eventually can result in families stopping their visits altogether.

Donations can also be made directly to the cemetery. Checks can be made out to: