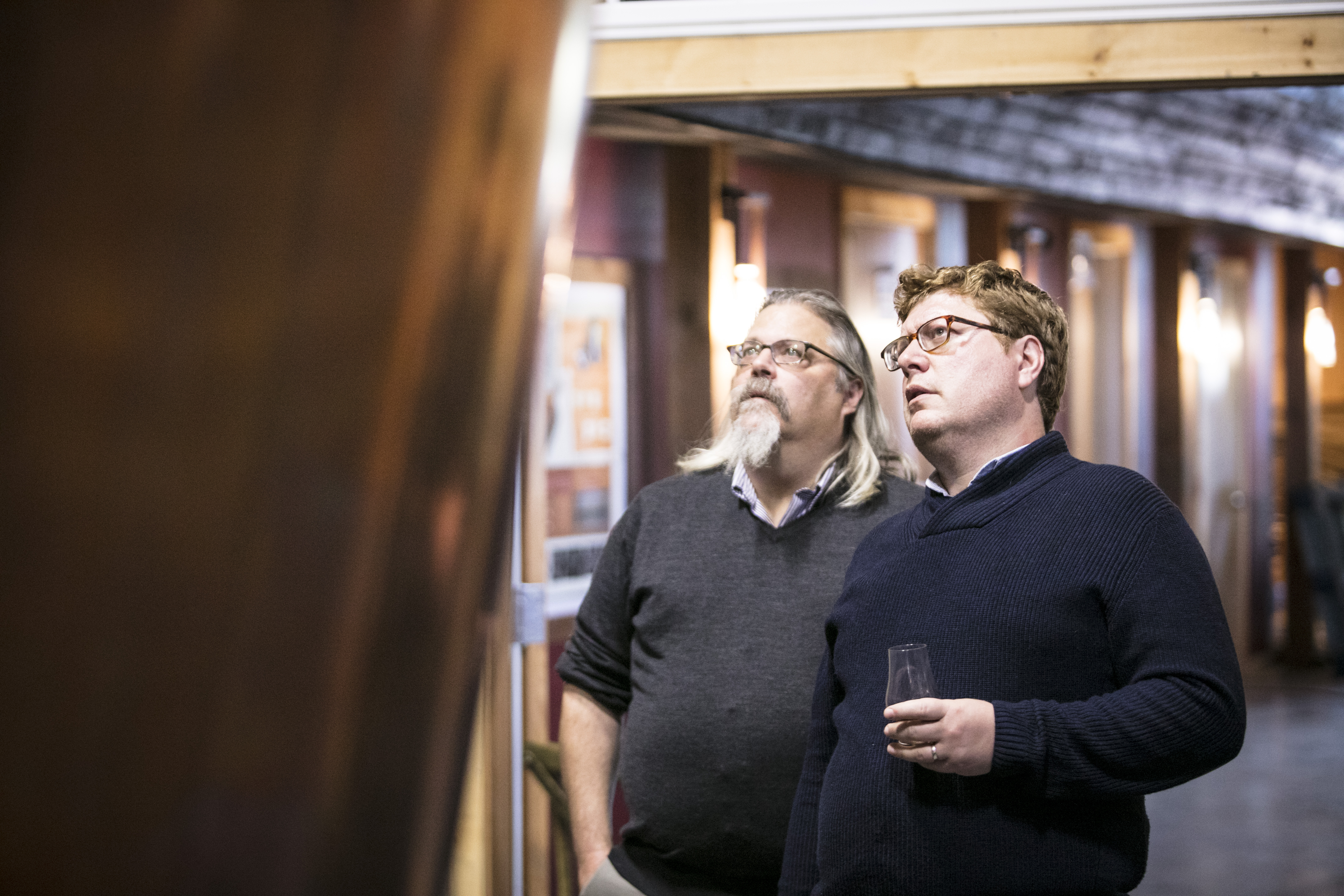 When it comes to cocktail history, there isn’t always a clear answer as to where a cocktail came from or how we know what we know about it — until now. David Wondrich, often hailed as the preeminent Cocktail Historian of our time, has partnered with Noah Rothbaum, award-winning Editor of Daily Beast’s Half Full, to produce The Oxford Companion to Spirits and Cocktails, a hefty 864-page reference guide book to every cocktail and cocktail ingredient you can imagine.

“It started in a bar when my friend Garrett Oliver, who had just written the companion to beer, told me that Oxford was looking to do a companion to spirits and cocktails,” recalls Wondrich. “I was not interested at first, but I managed to talk to myself into it, it just seemed like a lot of work, and I’d seen Garrett go through and then really work very hard on this, but finally, it just seemed like this was the time to do something new in drinks books and something new in big reference books. I had been doing a lot of teaching, so I had some ideas on it, and I said, what the hell? And then once I signed the contract, I realized I was in way over my head. And that’s when I called Noah, I needed help. We sat down and straightened out all the ideas and got assignments together and started calling people and now seven or eight years later, there’s a book.”

In the more than eight years Wondrich and Rothbaum spent working on this reference, they found they were able to challenge assumptions, find the stories behind the stories, and find more than 120 contributors who were highly respected in their fields to help bring those stories to life.

“We wanted them to go past what had already been written or known about the topic, so that all takes time,” Rothbaum says. “It’s kind of a wonderful thing to see people really get to dig in deep and focus on a topic and share their knowledge, whether it’s fermentation or distillation, or about the sour mash process.”

The greatest lesson the duo learned along the way, Rothbaum recounts, is that they knew nothing before they got started.

“I thought I knew a lot about spirits and cocktails when we started this project,” Rothbaum laughs, “Turns out, nothing. We knew nothing really, it’s amazing, just even personally, how much I learned from this project and just how much more there is to learn. Hopefully you can get kind of lost in there, and I’m not sure if anybody will read it cover to cover all the way through that way, but hopefully things will pique your interest and you’ll go from article to article, and really kind of get lost in all the stories and the information.”

The tome weaves definitions of cocktail ingredients with cocktail recipes in alphabetical order for quick reference. There are pages of definitions of different crème liqueurs right alongside the history of cocktails from the Cuba Libre to the Woo Woo, in more detail than you ever thought existed.

“Tt wasn’t the cocktails as much as it was the bartenders, because nobody has ever written biographies for a lot of these people, and looking at somebody like Ciro Capozzi, of Ciro’s in Monte Carlo, which was an enormously important bar, and finding his biography was just amazing for me,” Wondrich recalls. “Everything is called Ciro’s, that’s a common name for fancy bars and restaurants all over the world, and it turns out they were all sort of related, and it all goes back to one guy who was the son of a Neapolitan sea captain, and who maybe worked with Jerry Thomas in New York, and there’s stuff like that. That’s just stupendous. And getting to write the little thumbnail biographies that these drinks creators was for me, one of the greatest things I got to do personally in writing this because they’ve never really gotten their due. We don’t know when they were born, often we don’t know when they died or where they were from, we just have a name, and to be able to add some human being to that was great, same with distillers and so forth. That’s where the most surprises were for me, and the most gratifying stuff.”

In those early days of outlining the reference guide, Rothbaum recalls wondering whether they would even be able to fill a few hundred pages, let alone close to 1000. But by the end they had to just close doors and leave it as that because the more they found, the more they wanted to add to the book.

“We’ve uncovered so much more than we ever knew existed,” Rothbaum explains, “and there’s even more to find, so it was one of these things where naively, I thought at the beginning that this would only take a few years for us to do, because we thought we knew all this stuff and it was just a matter of getting people to write it down. It turns out, once you actually start to apply real academic rigor and research techniques, and with more databases coming online in the last decade and more books and reprints and libraries sharing their content online, a lot of the stuff that we thought that we knew, the facts actually turned out to be wildly different than what we assumed they would be going in. A lot of it was almost re-working and rethinking a lot of the stuff. That was probably the biggest take away. If you ever think you know everything about cocktails and spirits, the answer is you don’t. There’s a lot more to know, it’s exciting and humbling. It’s never easy to realize that stuff that you believe in or perhaps wrote about is maybe not accurate. If anybody tells you that they have that this is absolutely the right, this is who created this drink, then they don’t know what they’re talking about because it’s impossible right now, to make that kind of determination.”

In the study of history is the lesser-known study of historiography, or how we know what we know from history. History, as they say, is written by the victors, or in this case sometimes the brands’ marketing departments as sort of a wishlist of what they would have liked to have happened. Historiography examines the sources of assumptions and takes into account other sources of historical information to determine whether what is presented as fact truly is. This book eschews the marketing story of many cocktails and ingredients and instead focuses on the boots on the ground wherever possible, digging up the stories of the bartenders who actually had a hand in creating and popularizing many of the cocktails you know and love today.

“We live in a revolution in that, and that was one of the reasons this book took so long is because we had to take that into account, we couldn’t just take out the standard reference books and say, well, here’s what it says, that’s the story of this,” Wondrich says. “We had to go and try to re-investigate stuff as much as possible, and our contributors were very good about that and really went the extra mile, and as a result, we’ve managed to add a lot of new information.”

“For a lot of industries, so much research has already been done, from doctoral theses to all types of research books, and so much is already known,” Rothbaum says. “This is one of the first books that really applies a high level of academic rigor to the study of cocktails and spirits.”

A lot of individual cocktails or spirits have received a deep level of research, Wondrich says, but often those works are not easily accessible to the general drinking public.

“There are a lot of people who are really thirsty for knowledge, and can really appreciate it,” Wondrich says. “The academic world has kind of ignored them. There’s been a lot of academic writing about spirits for each other. But we try to make this book into a bridge between that and the general interested public and that I would love to see more things like that. Bartenders, spirits buyers, beverage directors, chefs, and interested drinkers, people who go to the liquor store and say, hey, I’ve never seen that kind of whiskey before, maybe I’ll try a bottle. Also, anybody who’s trying to figure out what people drink in various parts of the world, whether for research or fun or for other purposes. It’s a pretty wide group and we hope they’ll use it as a jumping off point for exploration. For distillers, it’s not a technical book, but there are lots of things that are maybe not generally talked about, different kinds of stills, different aspects of maturation and barrel aging and all that, it might prompt people to try something a little bit different.”

“I think with what Dave. And I try to do in our careers,” Rothbaum says. “When we do our Life Behind Bars podcast, and obviously what we do at Half Full at Daily Beast, we try to make everything as informative and authoritative as possible, but also accessible and interesting. Hopefully people will enjoy reading the different articles in this book, they’ll find stuff that will be informative, and hopefully you don’t have to be in the trade to enjoy it, but if you are, you’re still going to enjoy it.”

0 comments on “The Oxford Companion To Spirits And Cocktails Book: Interview with Noah Rothbaum and David Wondrich”