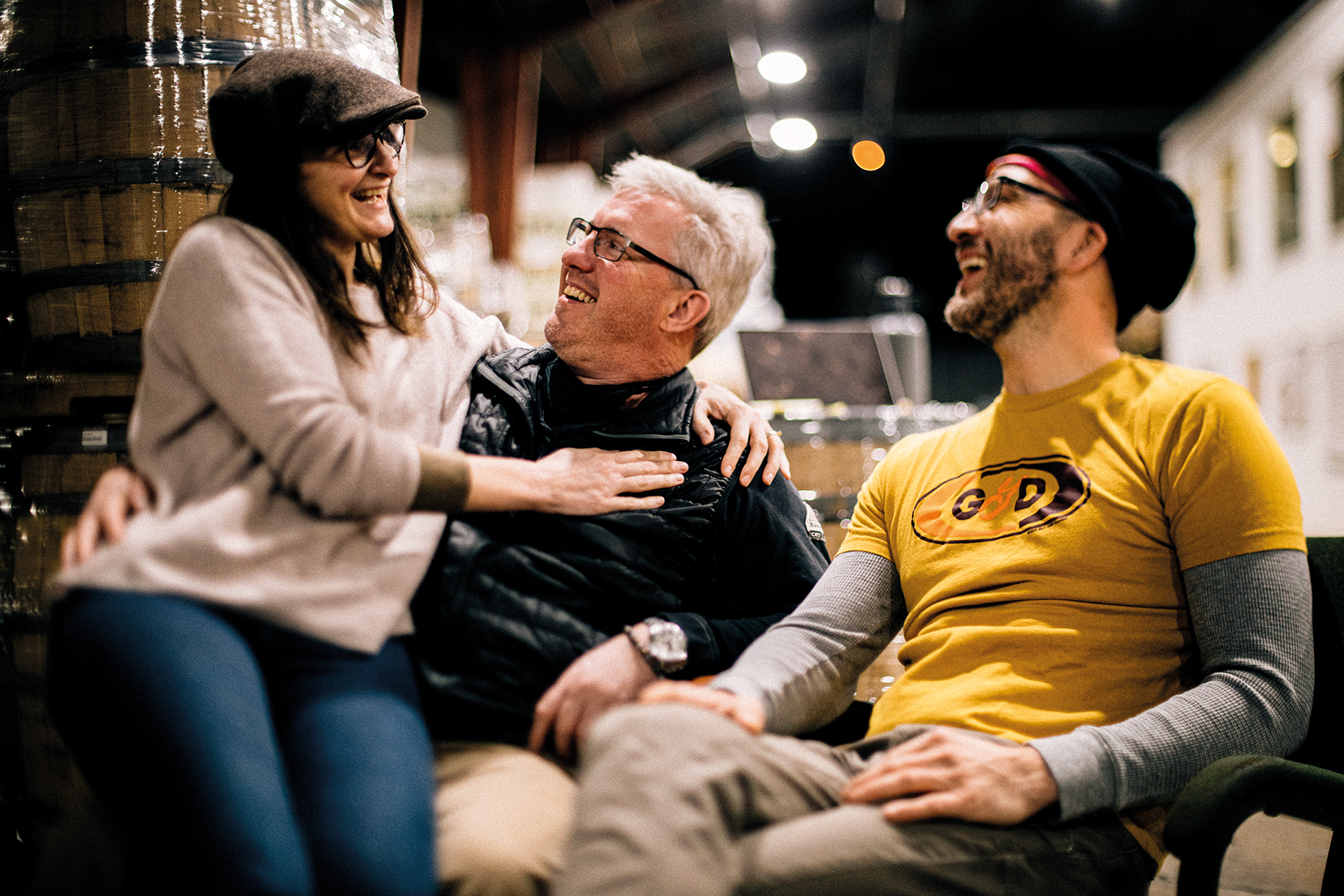 Editor’s note: this whiskey will be available for purchase on 15 October at Seelbach’s.

A very unusual project has come together, with 11 craft distillers stepping forward to contribute barrels of American single malt to create a vatted whiskey, from which all the proceeds will fund an internship program to help underrepresented people get a foothold in the distilling industry. So 11 casks of whiskey from 10 different craft distilleries, including FEW Spirits, Balcones Distilling, Santa Fe Spirits, Triple Eight Distillery, Rogue Spirits, Stateline Spirits, Thornton Distilling Co, Headframe Spirits, Bently Heritage Estate Distillery, and Sonoma County Distilling Co., worth an estimated $200,000 if sold under their original brands, were shipped to Headframe Spirits in Butte, MT.

A small group met at Headframe in February to vat all of the whiskeys mentioned. Reade Huddleston, of Headframe, sat in with Johnny Jeffery, of Bently Heritage Estate Distillery, and Randy Hudson, of Triple Eight Distillery.

“We sent a really good barrel of whiskey,” said Hudson, whose whiskeys can retail for more than US$500 per bottle. “I wanted to send one that I was proud of and that would give a really good influence.”

“Not to tout Randy and Johnny and Reade too much: but holy f###!” said John McKee, of Headframe Spirits. “They have put together

a really, really amazing malt. Their blend is spectacular. The way they were able to figure out how to take 11 American single malts and turn it into something is really amazing.”

And it’s not just whiskey that is being donated. Support has been given up and down the supply chain, including glass bottles, package design, PR and marketing expertise, paying the taxes, etc. Soft deals are falling into place with sympathetic distributors and retailers (of whom they have many friends) to forgo their traditional markup, enabling them to free almost all the proceeds to charity.

Good Deeds Spirits is the brainchild of no one in particular, but of a group called the Good Guy Distillers (GGD), that is plotting how to save the world one bottle of spirit at a time. Good Deeds Whiskey is the first project by Good Deeds Spirits, which GGD hopes will become a series of releases that will be able to benefit charities.

So, who are the Good Guy Distillers and why are they doing this?

The easiest answer to the first question is: GGD is a tribe of like-minded people in the distilled spirits community. They are only “guys” in the gender-neutral sense; about a quarter of the membership is female. They are not all distillers, as many are consultants, suppliers, laboratory scientists, or even journalists, involved in the craft distilling community. Full disclosure: this author is
also a member.

GGD meets in a private Facebook group, has occasional Zoom meetings to make sure everyone is surviving, discusses technical distilling texts written more than 100 years ago, and tells dirty jokes. And they will also
all get together any chance they get at distilling conferences.

McKee co-founded GGD about seven years ago, along with Jeffery, head distiller of Bently Heritage Estate Distillers, and Molly Pearson, of Still Austin, in reaction to the amount of bad information being spread on a number of online distilling forums. It seemed as if the loudest, most opinionated voices were often the least informed. Distillers needed a safe place to talk about concerns of safety, process, lobbying, and other business issues without being drowned out by the noise of unhelpful voices. “We were really looking for the right information and the right people to talk to,” said McKee. “Our problem was, forums, then and now… There’s just a lot of… people advocating for really bad information or unsafe information. And so, we just wanted to build someplace where we could have people [we] really trusted who can help answer [correctly].”

McKee and his wife Courtney also founded Headframe Spirits and Headframe Stills Manufacturing, in Butte, Montana, which they proudly call Butte, America. The McKees are even more proud that their workers can support their families and save enough to send their kids to college. In the life of the company, Headframe has donated more to charity than John and Courtney have paid themselves. Courtney is a Good Guy, too.

Jeffery – in addition to creating processes and programs at startups including Death’s Door Distillery, Santa Fe Spirits and Bently Heritage – is known for spending vacation time with indigenous tribes in the Ecuadorian Amazon. “The tribes have lost their ancestral lands [and] are exploring ways of fitting into the modern world while retaining as much of their traditions as possible,” said Jeffery. He is working on funding projects to teach tribes distillation for the extraction of essences of plants for use in body care products and also in perfumes.

GGD started with around 80 members and has swelled to more than 120. Annual purges – along with admittance of new members – have become a tradition. Sometime around August every year, and only once a year, Jeffery and McKee review the members and the nominations for new members. If you are not contributing, out you go.

McKee said, “We sort of made an unofficial limit of about 100 people because it’s about the biggest tribe size you can really have and sort of know everybody.”

“There have been people who have been kicked out two or three times, and every single time they’re kicked out, they come back and they say, ‘Hey, I know I’m not really active, but I learned a lot and I just don’t feel like I have found my voice in the group. Would you mind letting me back in?’ And we instantly let them back in,” said Jeffery on the subject, “but it serves as a reminder that you can’t sit on the sidelines. You have to be actively participating.”

GGD also got a reputation for good-natured hijinks at distilling conferences, which often ended up with people getting submerged in icy water.

A tradition was born one year after Westland Distillery earned Best in Show at the American Craft Spirits Association (ACSA) judging. Jeffery said, “There was a small group of us sitting in a hot tub at, like, one in the morning, whooping it up outside the hotel and the hotel staff kind of kept coming out and asking us to quiet down. And Matt, you know, stood up on the diving board and said, ‘I’m very sorry, but these are my subjects and I am their king, and I will silence them.’ So… he just kind of made this goofy proclamation.”

The next year in Chicago, Triple Eight Distillery earned Best in Show for Notch (Not Scotch) Single Malt Whiskey. The outgoing king, Hofmann, ushered Hudson down to the banks of Lake Michigan on a freezing cold February night for a coronation by submersion, dunking him in the icy water.

Support has been given up and down the supply chain

“There was this really special moment in Nashville, where Chris Montana became our king,” said McKee, “when we threw him in the Nashville River, that night while Randy Hudson was shucking oysters because he was the previous king. And the next year… is when we crowned Nicole [Austin], as our queen, because some of the work she had done at Kings County was Best in Show.”

Chris Montana, of Du Nord Craft Spirits, in addition to being king of GGD for a year, also served three years on the board and one year as president of ACSA. He had proposed an internship program to assist underrepresented people in diversifying what is a primarily grey-haired, pale-skinned and male community. At the time, most of the efforts of the trade organization were consumed on making reductions in the Federal Excise Tax on distilled spirits permanent, an effort which succeeded this past winter.

Du Nord Craft Spirits was one of 400 businesses along Lake Street in Minneapolis damaged last year in the civil unrest following the murder of George Floyd. The distilling community was shocked when the distillery was ransacked and the warehouse was set on fire. The outpouring of support for someone they knew having their business destroyed was overwhelming.

Overnight, GoFundMe pages were set up. The attention became more acute when national media focused on an African-American business owner whose business had been destroyed in protests over racial inequality. Montana’s positive, proactive, community-focused message made the rounds of nationwide cable newscasts and reverberated on social media. Donations poured in.

And Montana did what good guys and gals do: he thought about others, others who may have lost more than him without the benefit of national media attention, others who may experience hardships on a daily basis instead of a one-time catastrophic event. Montana started the Du Nord Foundation, creating separate initiatives for the rebuild recovery fund, food relief and wealth development with an eye toward economic justice. To date, the Du Nord Foundation says it has received donations from more than 12,000 people worldwide, bringing in well over $1 million. (For more information, go to dunordfoundation.org)

Separately, GGD took to heart what had happened to its friend, its colleague, its former king. So it put its whiskey where its mouth is.

“We landed in 2020 and, like the rest of the country, confronting what happened after the George Floyd murder: the protests all over the country,” said Jeffery. “A lot of us took a look at ourselves and said, ‘You know, we’re not doing our job here and we’ve been asked to do our job on this, and we need to pony up.’”

The Spirits Training Entrepreneurship Program for Underrepresented Professionals (STEPUP) Foundation will be the first recipient in what GGD hopes will be a long string of good causes. STEPUP is a program announced this May by ACSA to provide comprehensive distilling internships and job placement to underrepresented people in the distilling community.

Montana said, “The STEPUP Foundation took the basic bones of something I had been jumping up and down and screaming about for years and made it vastly superior.”

According to an ACSA press release, “STEPUP will facilitate workplace diversity in the spirits industry through training and job exposure for those of different races, genders, disabilities and sexual orientations, eager and interested in working in the spirits sector. The program will create an access point to learn about all facets of owning and operating a distillery… The internship program will cover a comprehensive training curriculum, including segments in production, compliance, marketing, sales, hospitality and business management.”

Good Deeds Whiskey is marrying in the barrel with plans to release 1,000 bottles in the late summer. And there is enough whiskey left in barrel for a second release, tentatively planned for December. The first release will likely retail between $60 and $90 a bottle. The whiskey is expected to create more than $50,000 to administer the internship program, the first two recipients of which should be announced in December this year.