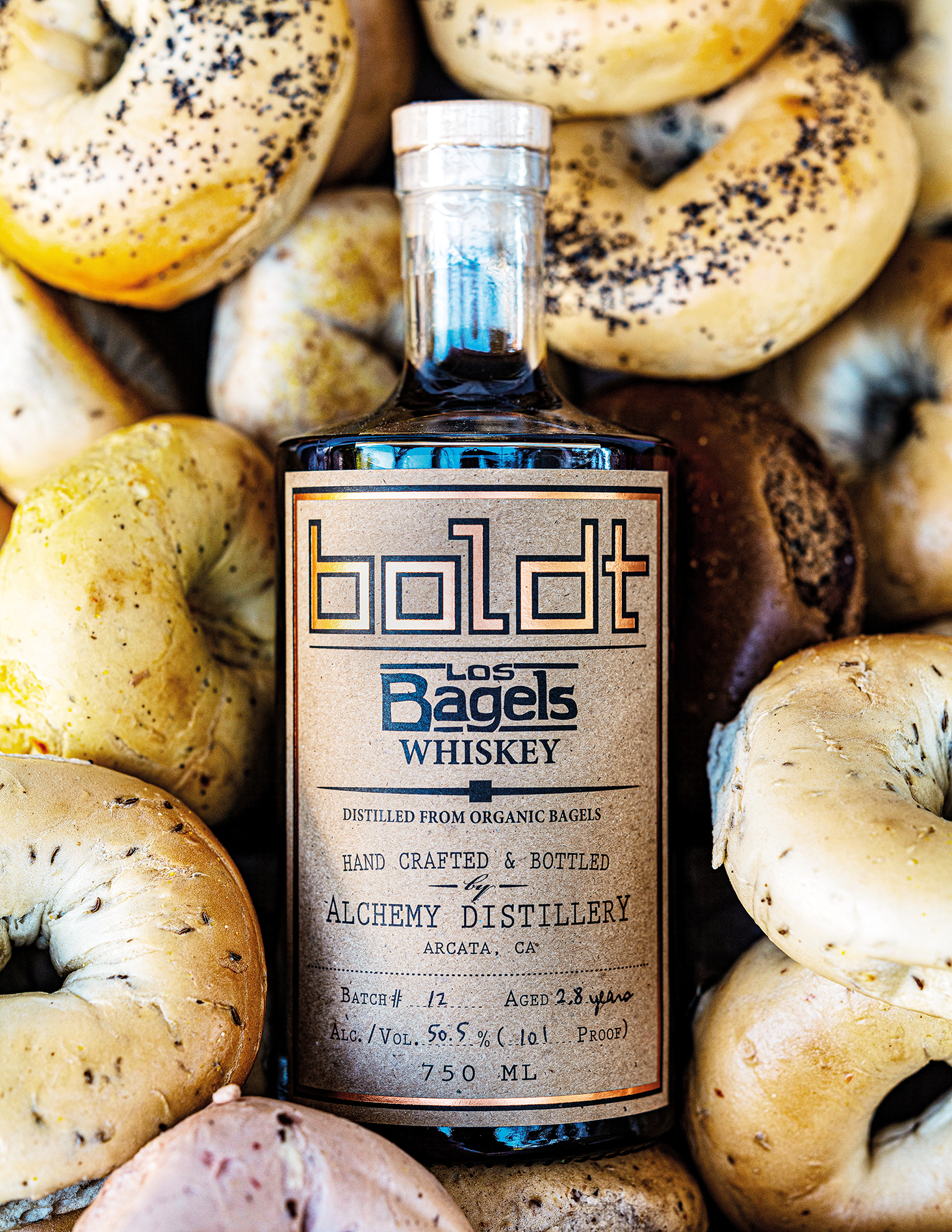 Los’, ‘bagels’, and ‘whiskey’: three seemingly incongruous words, but when put together they become Los Bagels Whiskey; a collaboration between a bagel bakery and a distillery to reduce food waste, and a happy victim of its own success.

Husband and wife, Amy and Steve Bohner, had been operating the Alchemy Distillery in Arcata, California, for a couple years, when Amy read an article about Toast Ale, a beer made from excess bread. If you can make beer from bread, then surely you can make whiskey from bread… right?

Amy said, “What if we could do that same concept but make a whiskey?’”

She could not resist her enthusiasm. Of course, Steve had some misgivings, but Amy is a force of nature and he knows better than to do anything to contain that force.

“I started calling every local deli and bakery and restaurant, and one of the neat things about our community is they’re very conscientious,” said Amy, “and there’s an agency called Zero Waste Humboldt. So, people really pride themselves on not having a lot of waste, and being very efficient in what they make and what they order for their customers, so nobody had any leftovers for me.”

Undaunted and determined, Amy dialled up Dennis Rael, founder of Los Bagels Bagel Bakery and Café, less than a mile from the distillery, to inquire about their excess bagels. Rael knew the Bohners, not just from the distillery and the construction company, Alchemy Construction, which they had run since the 1990s, but also from community activity. Both were active in the aforementioned Zero Waste Humboldt, a local organization dedicated to creating a more sustainable economy.

“We both had known each other as customers back and forth, and so when she initially brought me this idea, I was just excited,” said Rael. “I know that she’s been a real community person and I do a lot of stuff in the community, so it was like, ‘Are you kidding me? This sounds fun and interesting. Let’s give it a shot!’”

Rael had named Los Bagels as a nod to his own mixed heritage. “My mother was Jewish and my father is Latino, and so it’s just combining my two cultures,” said Rael. “I grew up with both bagels and tortillas and ironically, previous to this, I opened up the first Mexican restaurant in the Netherlands.”

Rael had ventured to Amsterdam with Tomas Estes, the late founder of Tequila Ocho. In an August 2017 interview with the trade publication El Restaurante, Estes said, “By 1976 I had $15,000 saved up, and with that money I moved my wife and our nine-year-old son to Holland. We found a tiny store front we could afford in a pretty bad part of town and started our first restaurant, Café Pacifico. I brought along a friend of mine, Dennis Rael, as our cook. We used his family recipes.”

Rael said, “We brought the first Tequila not just to the Netherlands but to Europe.”

Estes went on to open Mexican restaurants and Tequila bars in London and Paris, while Rael came back to his native California and founded Los Bagels in 1984.

When Amy came to Rael, day-old returned bagels were being sent to local farms as pig feed. Rael checked with the pig farmers. Not wanting to rob any pigs of their dinner, Amy offered to bring the pigs a delicious slop of spent grain from whiskey making. The pig farmers were perfectly happy to share the bounty of bagels, taking varieties that were not appropriate for whiskey making like onion, garlic, jalapeno or cheese.

Donating spent stillage for pig feed is something Alchemy Distillery has been doing since its first batch. Amy said, “I’ve gone through a lot of different pig-farmer partnerships, but I’ve never had a farmer not lined up. So I’ve never dumped any down the drain or out in the yard. Every drop since our very first batch has gone to pigs.”

At press time, Alchemy has donated 50,890 gallons of pig feed to local farmers. Most of this pig feed has gone to the Humboldt Sheriff’s Work Alternative Program (SWAP), a jail alternative for non-violent offenders.

“Instead of serving time in jail, they can work on the pig farm,” said Amy. “I just think that’s so cool. So the truck pulls up six times a month and they take the mash to the pig farm and that pork is sold to FFA [Future Farmers of America] kids, or used in the jail for food.”

Alchemy arranged to leave two 32-gallon bins in the freezer at Los Bagels, which were filled with the plain and seeded bagels. When they were full, she hauled them back to the distillery, where they stayed frozen until ready for mashing.

When Amy had collected the first 200 pounds, she placed them on a table in the sun to thaw, cranked up the ‘80s music, and went about the arduous process of cutting bagels into quarters and stuffing them into the food processor. Thirteen hours later, Amy had carpal tunnel syndrome, a burnt-out food processor that was too hot to touch, and 220 pounds of crumbs. Obviously, that production method was not to be repeated.

“It would take months to do this and to have enough chipped bagels in the freezer to make a batch of whiskey,” said Amy.

On Craigslist, the Bohners found a used woodchipper. Amy drove 75 miles to meet a stranger in a supermarket parking lot. She hauled the chipper back to the distillery, where it proceeded to break down. The frozen bagels made an “insanely loud” noise and

flew out of the chipper in every direction. The muffler fell off and the fuel line broke. Alchemy’s head of plant operations – aka Steve – fixed the machine and rigged a supersack onto the receiving end to catch the output. Beyond that, everything was easy.

Alchemy found that ground bagels behaved pretty much the same as the heirloom grains it contracts local farmers to grow for its whiskeys. They both required about 1,500 pounds for a batch. They fermented out in roughly the same time – about four days. And they behaved similarly in the still. Before too long, the Alchemy Distillery had its first barrel of Los Bagels Whiskey waiting to mature, only the 12th batch of whiskey made in the distillery.

One barrel remains in the warehouse, waiting to mature at least four years…

Purists might argue that a spirit made from bagels is not whiskey, but since the ingredients of the bagels were limited to wheat, seeds, yeast, water and a little bit of salt, the spirit qualifies as ‘distilled from grain’ and therefore whiskey.

“The bagels are 100 per cent organic grain, and the varietals that they would give me were plain, poppy seed, sesame seed and multigrain,” said Amy, adding that the sesame flavor came through in the process. “The sesame seeds with the charred oak barrel, just do really great things together.”

Alchemy has a policy of not bottling whiskey younger than two years and the anticipation for this barrel was high, so right at two years in barrel, Los Bagels Whiskey was bottled. The liquid was born and sold out immediately.

Around this time, the project became a victim of its own success, or its success became its undoing. The overall goal was to eliminate food waste. The whiskey helped Los Bagels focus on overproduction and only make as many bagels as they sold. The number of leftover bagels declined.

“Quickly, we realized that we were giving her, you know, a large quantity of bagels that were really working for her project,” said Rael. “We were able to start cutting down on some of our production but then [that was] also kind of cutting her out of her source for the bagels to make the whiskey.”

A full bin of frozen bagels every week reduced to one bin every two months, barely a trickle of the former flow. It was no longer viable to make whiskey from bagels.

“My disappointment quickly changed into being proud that Los Bagels realized that they could cut back on production a little bit,” said Amy. “They didn’t need to be providing so many bagels to this project and the pig farmers and so they streamlined their production. And when there weren’t enough bagels for me, I actually thought that was a great thing.”

“Amy has just done an amazing job of sourcing this product; one that would have been a waste product,” Rael said.

As reward for their good deeds, in consecutive years, both businesses were awarded the Green Business of the Year from the Arcata Chamber of Commerce.

Production has stopped but the good news is that Los Bagels Whiskey lives on. One barrel remains in the warehouse, waiting to mature at least four years (and possibly more) before it will be released.