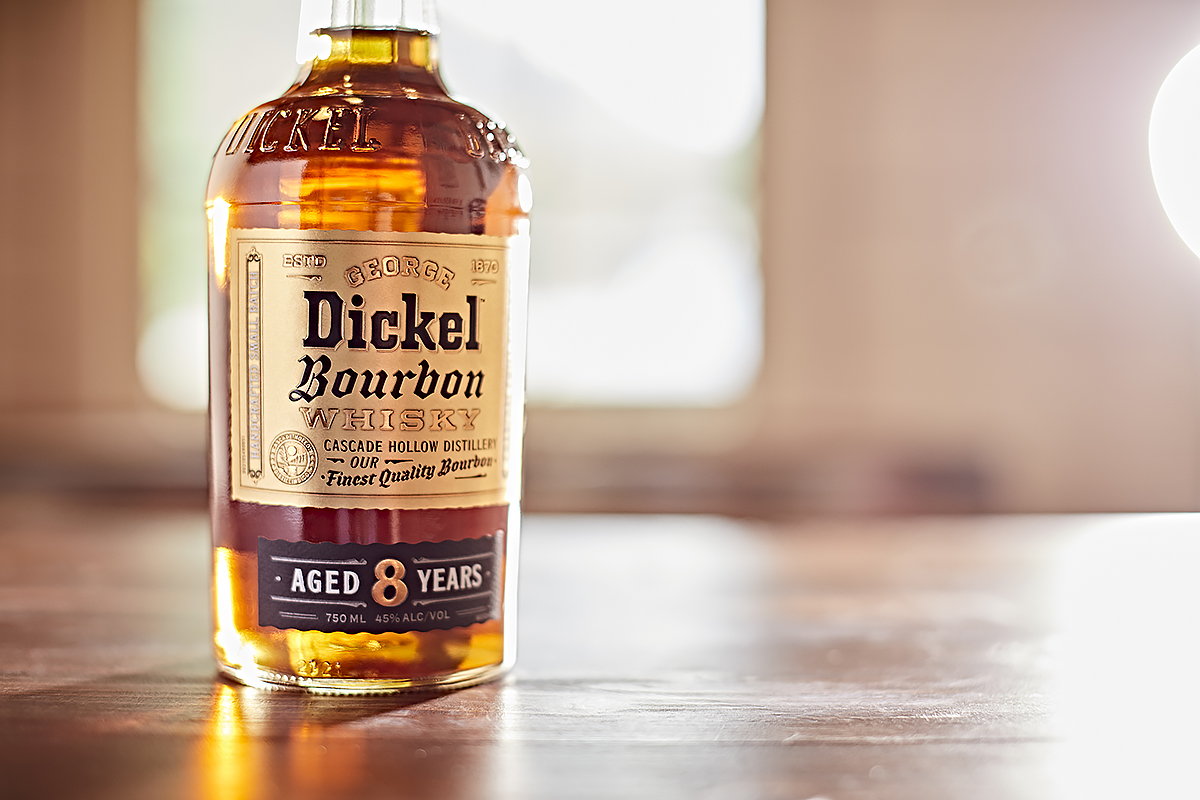 If you did a double take on the name of this whiskey, you probably wouldn’t be alone. As a brand that has become pretty synonymous with the production of Tennessee whiskey, during its rich and eventful 150-year history, George Dickel is undergoing a moment of reinvention.

Hailing from the Cascade Hollow Distillery in Tullahoma, Tennessee, George Dickel Bourbon is the brainchild of general manager and distiller, Nicole Austin. We caught up with her to discover the process of bringing this whiskey to life – from barrel to bottle.

Phoebe Calver (PC): What did you hope to achieve with the Dickel Bourbon?

Nicole Austin (NA): That’s a big question; I mean at the risk of sounding a little bit grandiose, Dickel Bourbon is a real turning point for us, I hope. I have spent the first few years in my role at Cascade Hollow really working hard to change the way people thought about George Dickel, and about Tennessee whiskey in general, and what this distillery was capable of. That’s a lot of what the initial bottled-in-bond releases were about, and the single barrel, and also being a little more forward thinking with Cascade Moon… hopefully starting to change the conversation.

Obviously, for a whiskey drinker, those limited time offerings… they’re exciting and fun to find, but I think the thing that really moves the needle is to have something that’s a reliable go-to. Whiskey is not for collecting dust, it’s for drinking and enjoying and so launching Dickel Bourbon was about trying to get to that place, which in a lot of ways is even more challenging as a producer. To launch something like Dickel Bourbon it took a little while longer because I had to really get to a place where I could feel confident that I could reproduce this not just once, but repeatedly and reliably.

I think the success or failure of this will be quite important.

PC: Now the whiskey is out there, do you feel like you’re on the road to achieving what you set out to do?

NA: Well it’s so hard to tell… I’m so used to really conversing with people. In the run up to releasing something we kind of go around and give folks some sneak peeks of what I’m working on… and really are out hearing what they’re saying and it’s been very strange for me to not get either of those pieces really.

I think I’m really encouraged from what I’m seeing early on. I’m encouraged by the level of interest that we’re getting and to see people saying they’re surprised and they didn’t know that Dickel could make liquid like this… that’s exactly what I was hoping to hear. It’s such early doors, so who knows.

PC: What was the process of creation?

NA: I have spent so much time blind tasting against other competitive Bourbon brands because I couldn’t go out and speak to people and I created some really ridiculous and elaborate systems to try and blind taste myself.

Cascade [Hollow] Distillery has quite an underdog history, there’s so many times that this distillery and these brands were almost lost forever and then resurrected. In the recent past the distillery operated and then it shut down, then it was bought and sold and so there’s quite a bit of inconsistency in our supplies, so I really spent a lot of time trying to get to know what we had.

I sampled thousands and thousands of barrels and in the process of doing that… a lot of them, a really big chunk, to me read as lovely balanced Bourbon and I didn’t know if that was an anomaly when I saw that the first time I thought I need to see that again to feel confident that it’s a persistent thing and not a one time thing. That’s what kind of gave me the idea that I should release this whiskey and I should give these barrels a chance to exist on their own.

So choosing to call them Bourbon, that was a big move and it was a result of a bit of a debate… as obviously George Dickel has been making Tennessee whiskey for 150 years, so this is quite a departure. Of course there was the period when it was made elsewhere when Prohibition was in Tennessee, so it’s not entirely anomalous in our history, but it’s certainly a pretty big move.

The reason that I think we all kind of aligned and why I really stuck to my guns on that one was, to me, it was actually the best and most accurate description of what was in that bottle. I love tennessee whiskey and the heritage of it, but certainly we know with Tennessee whiskey it’s a category that a lot of people don’t know about and in some ways that excludes a lot of folks and they need to have listened to an in depth whiskey podcast to understand the opportunity that tennessee whiskey holds – or I’m like, you could just put Bourbon on the front of the label and invite everybody in.

PC: How do you think today’s consumers will approach this whiskey?

NA: I really wanted to make the kind of whiskey that would be a nice place to start [for whiskey drinkers], one that is lovely and approachable and balanced. You can sit and appreciate and savour it if you want to, but it doesn’t force you to think too hard. You know it’s just nice whiskey.

PC: Do you think that you will be able to replicate this for many years to come?

NA: I think I will be able to replicate it, before I even released it I made the first three blends. I definitely plan to make this continuous and reliable. I’m working pretty hard to keep a consistent supply and that’s one of the reasons we’re being a little cautious about the size of the initial launch and only doing it in a few states to make sure that I can keep them supplied. There’s no such thing as a limitless 8-year-old Bourbon, but I’m trying to be quite mindful of the folks that get a chance to buy and try it, that they can also rely on it.

That’s the hardest part with making whiskey, it’s trying to look into the future and predict how your own whiskeys will turn out and also what people will want. It’s a challenge. I know folks are frustrated with allocation, but I always try to remind them it’s really hard.

PC: In terms of the sampling process, when did you first begin this and how long did the actual sampling take?

NA: It’s been a continuous process, you know I’ve done a really big mass of sampling twice… you know we’re going in and getting thousands of samples and assessing them. We might go in and do more targeted sampling, so for example, after the initial blending when I really honed in on an 8-year-old age statement, something that I did was go in and check in on the 6- and 7-year-old liquid just to be confident that I had enough in those specific ages to meet with how I’m planning to grow next year and after.

So it’s informed by that broad sampling, which takes about two months to collect the samples and then about six weeks to do the assessment.

So you can only nose maybe 50 in a day max… and all the barrels aren’t nosed individually which is quite helpful. When I’m assessing maturing whiskeys at that scale… I have one ‘lot’ of whiskey, which is a day’s worth of filling out of one tank. Typically in large scale blending they make an assumption that those whiskeys are relatively homogeneous, which of course, if you’ve ever seen a single barrel program, you know isn’t entirely true. So the way that you try to approximate that is to sample from multiple different barrels within that lot and then composite that together. So I don’t nose every barrel individually but there’s kind of a chunk of work to composite samples together and then there might be five individual barrels that might be blended together and then I nose that sample. So that makes the nosing go a little bit quicker.

PC: From the 6- to 7-year-old barrels, did you notice a real change between that and the 8?

NA: There is… you know it’s hard to say if this will be consistent but I have seen it in the last few years. You know at least in our warehouse… I would never say this is universal. But that 8-year point, there’s just a real balance that comes in… the 8-year is actually the youngest that’s in the bottle right now, most of it is in the 8- to 10-year range and from what I’ve seen that is sort of a ‘sweet spot’ of being mature enough to be balanced and integrated where the flavours are all integrated within one another, the grain is not overpowering and the wood is not overpowering and that is common in more barrels.

PC: What is it about this liquid that stood out and stands out to you?

NA: I think that it’s perfectly balanced – it’s the number one goal and the biggest thing that I wanted to come out with this whiskey. All of the flavours are present and in balance with one another, it’s an approachable pleasant and enjoyable spirit that doesn’t make you work too hard to enjoy it.

I have to assume that there are so many folks out there that love Bourbon so much right now, and I think there’s a need if you appreciate a whiskey of quality, that you don’t always want to be having the most special thing. If you appreciate those things and you certainly do care about the whiskey you’re drinking, but sometimes you do just want to be able to pour a nice whiskey and not worry if you’re pouring for someone who will adequately appreciate it, or if the setting is perfect, or if you have the right glassware, you know you can just pour it and enjoy it. But you still want a nice whiskey because you care about whiskey. I see that a lot in beer and wine and I hope it will become a bit more relevant in whiskey too.