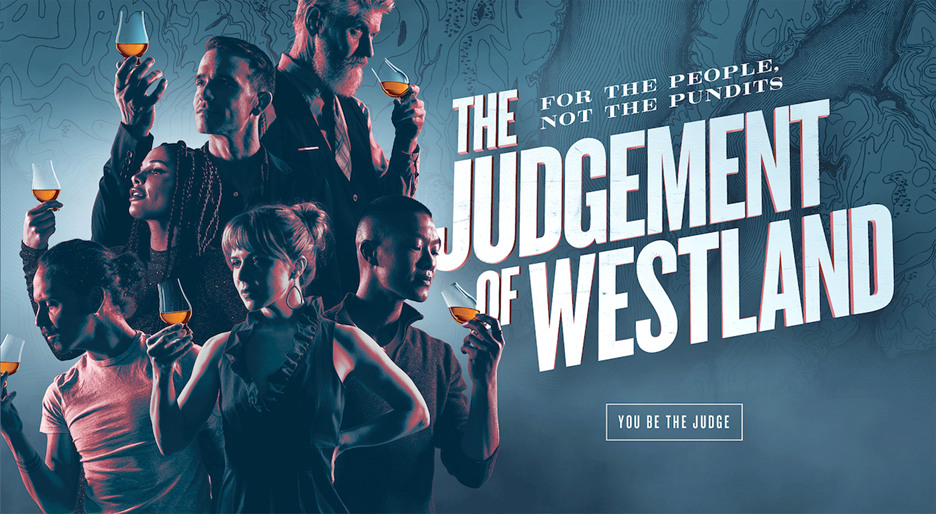 In conversation with Dave Broom and Sam Simmons

In October this year, Seattle-based Westland Distillery announced the launch of The Judgement of Westland – a three-month long campaign that kicked off at the Whisky Show in London.

Taking inspiration from the world of wine’s Judgement of Paris, a blind tasting hosted in 1976, the series features blind tastings of four single malt whiskies that hailed from four different global regions.

The team at Westland chose to seek out two independent whiskey consultants, Dave Broom and Sam Simmons to assist in selecting the whiskies and creating a scoring system that would ensure the drams were graded individually on their own merits.

The duo sat down with American Whiskey Magazine at the Whisky Show to delve into the process of creation behind this assessment of the global single malt category.

Whisky Magazine (WM): What was your experience of the first tasting?

Dave Broom (DB): I think people were a little bit surprised as to what it was… they’d heard of The Judgement of Westland and we’d go, “it’s a blind tasting” and you can see it in people’s eyes as they go “oh no!”. So we clarified… we’re not throwing you any curveballs, there’s no high strength stuff. All you have to do is work out, not even personal preference, but just what the quality of each glass is and if you think they’re all worthy of four or five points then give them all four or five points – it’s not a competition.

Once people got their heads around that the engagement was great… it was very evenly spread in terms of the marks. Some people were going one way and some people another, and that’s kind of the point. The point isn’t to try and say that one thing is better than another, it’s saying we’re in a completely different world of whisky and there is a level playing field.

Sam Simmons (SS): Well it’s easier to navigate a confusing category if you know the hierarchy of what you’re supposed to like and what’s supposed to be better… now we’re dealing with 50 different countries making whiskies that are 3 years old – well that completely changes. We need to start considering that there isn’t one better than the other and they’re different drinks for different occasions, for different palates, for different moods and there’s obviously room for all of them.

DB: It’s a major activity in the States, through whisky clubs and liquor stores. Essentially anywhere that Westland has a presence – using the same whiskies. And every time you go onto the website, at the end of every tastings then the scores and the graphs will be recalibrated.

WM: How did you both come to be involved?

SS: I got a text message from Dave… I mean I know Westland, I’ve been there twice when I worked with Balvenie… Awesome people, awesome vibe, both looking to Scotland for guidance but paving their own roads. But the opportunity to get involved in the activation idea totally came from Dave.

DB: Steve Hawley [vice president of global brand marketing at Westland] got in touch, I’ve been out there a few times and got to know the guys quite well, and Steve… said they wanted a third party. They wanted be able to sit back and say ‘we haven’t picked it’ because as soon as the brand picks it then you’re open to accusations that you’re trying to skew it in some ways.

We came to our long list [of whiskies] fairly quickly, and the short list followed relatively soon after that. Not to make it impossible for people, but to make sure that there was a degree of commonality between the whiskies – you know the level of maturity, not necessarily the age statement because they’re coming from different places and different conditions, but the level of maturity is going to be pretty much the same.

The flavour profiles are going to be typical of the place, but at the same time there’s some level of commonality. It was funny, I did a nosing of them before the class started and was like… I’m glad I’m not doing that, or trying to guess what they are, because I think they’re pretty nicely chosen.

WM: What did you think of the idea of ‘The Judgement of Westland’ itself?

SS: We get the ambition of what they’re trying to do and I think it’s such a good lesson and a brave and noble thing to do as well. I think they also were obviously comfortable with not being the winner… You know there is something about whisky that is all about rising tides. And what is really beautiful about an exercise like this from a craft distiller, yeah sure owned by a large company, but doing something super cool that doesn’t just raise their profile but that of all whiskies. It’s a really cool thing to be involved with.

Fortunately whisky, and that is a credit to Scotch I think, already fosters an open minded exploratory personality that’s up for taking a risk and discovering the next whisky. You ask most whisky lovers what’s their favourite whisky and most of them will joke the next one, because that’s part of the adventure.

DB: I do think people’s attitudes have changed fundamentally in the past, even just five years… I think what this Judgement does is allow them a little bit more information and access to the fact that this is the reality of 21st century whisky.

WM: How did you go about creating the scoring system?

DB: For me numbers just don’t make sense, but stars give kind of bands of excellence, so you can group things together and I think it’s a lot easier. I think if we’d said go on mark all of these out of 10 people would have gone and started looking at it as a competition and said that one’s a little bit better so I’m going to give that 7.5 rather than 7. Whereas saying 1 star to 5 star [removes that problem].

WM: How do you think this will impact the future of single malt globally?

SS: I guess the thing is in whisky… we won’t be that surprised that the world is making wonderful whisky. Whereas in wine it was shocking and controversial because there was more associated snobbery and an established, accepted hierarchy, which has always been under some doubt for most whisky lovers.

DB: I’m going to be really interested in monitoring how it goes over in the states, where there’s probably less exposure to world whiskies, or even American single malt. So I think there’s an evangelising side to this as well and the fact that it’s not just at a show like this [Whisky Show] where you’re preaching to the converted -it’s going into bottle stores, so you’re reaching a different demographic, so that’s going to be really fascinating I think. You forget how little whisky, in terms of range, how hard it is to get hold of a lot of stuff in the states.

0 comments on “The Judgement of Westland”