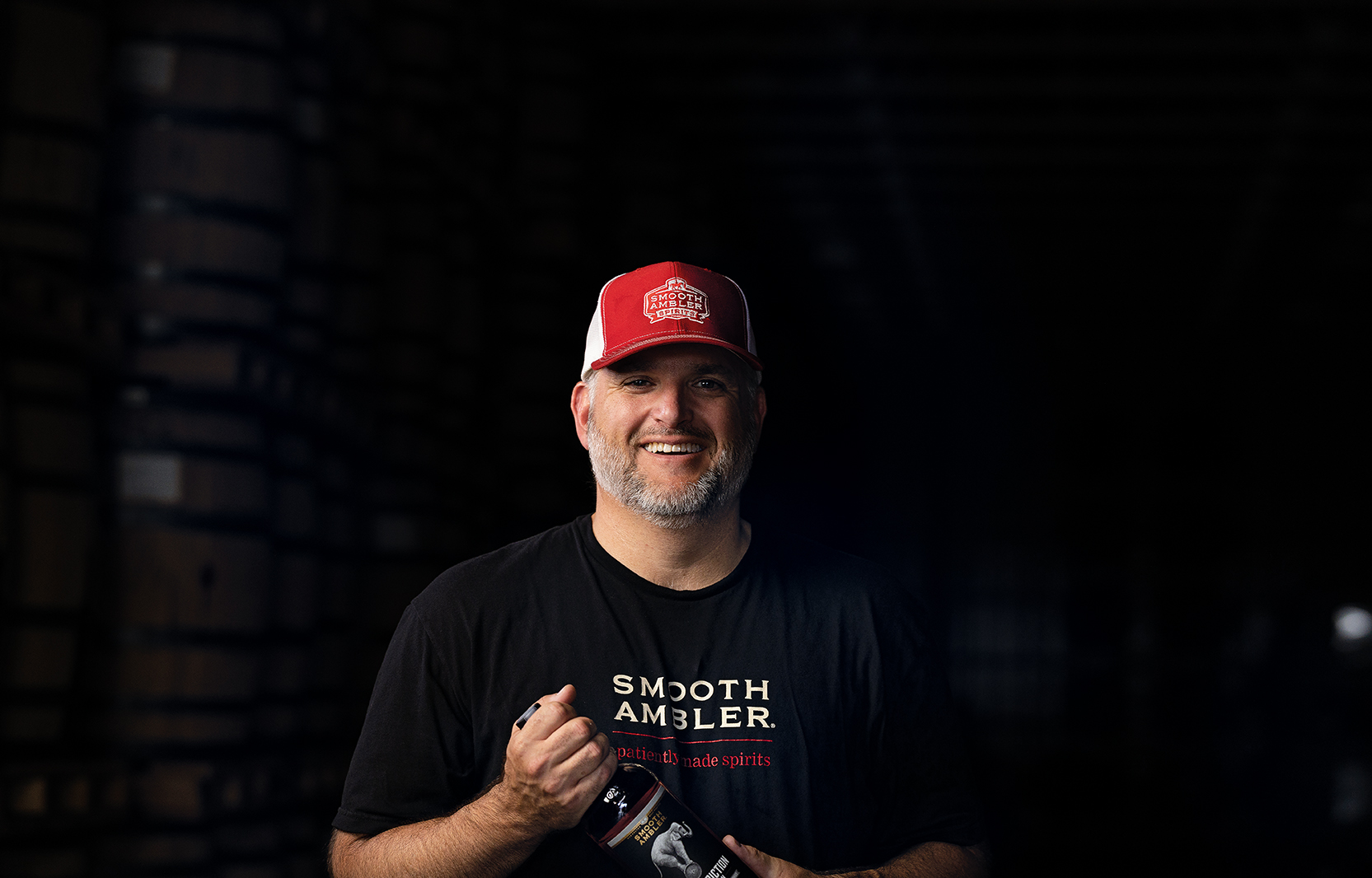 In conversation with John Little, Smooth Ambler CEO, on the subject of the Founders Cask Strength Series Straight Rye Whiskey

The unicorn chasers will be out in force this holiday season, as Smooth Ambler Spirits unveils its first 100 per cent self-distilled rye whiskey. Founders’ Cask Strength Series Straight Rye Whiskey is a five-year-old, non-chill filtered, non-carbon filtered, straight rye whiskey. It will mark a milestone as Smooth Ambler’s first release of rye whiskey that was entirely mashed, fermented, distilled, aged and bottled at their distillery in West Virginia.

It was time tocatch up with Smooth Ambler founder and CEO John Little to find out more about this latest release.

Andrew Faulkner (AF): How involved was Seagrams/Lawrenceburg/MGP of Indiana master distiller, Larry Ebersold, in the making of this rye whiskey?

John Little (JL): We use a kind of a unique cooking style which Larry helped us figure out, which is a style called ‘infusion cooking’. So, it’s a process that they used at MGP, and that we use. Basically, instead of taking rye up to a really high [temperature], you take corn up to a really high temperature to break those starches down, and then you can either cool and add rye, or you can add rye along the way so the rye and the corn are cooked together. And then you would cool and add malt. Our style is to cook it at a much lower temperature… basically, think of it like kind of like smoking [meats], like low and slow. Then we increase the temperature and we add the malt. So instead of bringing malt on the way down, we actually cook at a lower temperature and it takes longer to break the starches down. We think [it] gives her more robust flavor. And then we increase the temperature and we add malt, so it’s a really nice, really nice way to do it. Larry helped us. Obviously, he… made the [MGP’s] 95-5 [mash bill]. He kind of helped us refine this recipe; our recipe is an 88 per cent rye, 12 per cent malted barley.

AF: Was this the first time you worked with Larry, or did he help you when you were starting up the distillery?

JL: He came along in… 2013 or 14 and just did a little bit of consulting for us. And that was when we were just doing pot still. Then when we moved to a continuous column in 2015, he helped us to design that continuous column, and then help us get it up and running for the first time. We’d cooked. We’d fermented. We’d distilled. We’d done all that. We’d never done it on a column. He helped us get going with the column, and then from there he really started helping us refine some recipes as well. This is one of the recipes that he helped us refine in the early days. And then he continues to be a resource for us. We talked to him last week. We sent him some product. We sent him… this batch, this first batch of Founders’ Rye and said, “Hey what do you think? We’re gonna put it on the market.” And he said, “I think it’s gonna be great.” We gave him two different recipes, he said, “I think either one is going to be great. You all decide.”

AF: What was the cooperage you used?

AF: Cooper’s Select: are they the ones that are toasted before they’re charred?

JL: Yep, they’re toasted once and then charred, made up of 12- to 18-month-old yard-aged staves.

AF: Larry started working with you in ‘14. You were founded in ‘09. When did you start distilling?

AF: Is it fair to say that this was a plan that’s 10 years in the making?

JL: Yeah, it’s a dozen. It’s probably… been a good 13 years since we had the idea. But… the reality for this recipe is, it’s been about seven years in the making. Right? We’ve never released a homemade rye whiskey. The few people have tasted it – we have a group here called the Dramblers, [for whom] someone started a Facebook page called the Smooth Dramblers… fans of Smooth Ambler, and a few of those people have tasted it, they’re like super fans of the distillery – and they’re really excited, and I can tell you the feedback we got from Nancy [Fraley] and from others leads us to be very excited… I can’t wait.

AF: Was the Big Level Bourbon your first release made from 100 per cent in-house distilled juice?

JL: No, [when] we released the product we had three releases all wheated Bourbon. We had a thing called Yearling, which was a product we released in small barrels. Yep, and you know how small barrels are. We didn’t do small barrels very well. And then we released the product just Smooth Ambler Wheated Bourbon and then that transitioned into Smooth Ambler Big Level Bourbon with a label change. And Big Level: we haven’t stopped making it… We’re gonna let it age up. It was only about four and a half years old and I think it needs to be older. So we’ve decided that we’re going to just let it all age up, so it’ll come back at some point in time.

AW: When Smooth Ambler was first on the whiskey scene, there was the impression that the plan was to continue to source whiskeys until you could take over the stream with your own house-distilled. But you now have a couple of wildly successful brands based on sourced juice. Has that plan changed?

JL: Originally, when we first built the distillery, we didn’t know what sourced whiskey was. But from the time we knew what sourced whiskey really was with the introduction of the first Old Scouts. At the time it was five years old, but what everybody knows is Old Scout 7 – we never really wanted to go back to all house production… It’s very different than the whiskey I originally had in my mind, which was kind of antique shopping for whiskey and independent Scotch bottlers. But I don’t really want to go back to that. I haven’t really wanted to go back to it since the Old Scouts.

Old Scout works for us. What we make doesn’t taste like MGP. It tastes [like] something different… a different yeast, different flora and fauna and, you know, different water and different stills. And so I think that’s really wonderful. We got this really great thing. So we think of our business now three ways: the stuff we make, the stuff we don’t, and then Contradiction is a blend of those two different efforts… We didn’t make enough product years ago to support the volume that we’re doing right now anyway. But that’s not why we did it. We did it because we thought it was what made the juice better, right? We’ve always tried to do what we say, “Do what’s right, every day in every part of your business.” Whether it’s about social issues, or about doing the right thing for your customers, but also doing what’s right for the for the juice in the bottle: do what’s right for the whiskey.

And so there’s a reason we have certain things at certain proofs, and there’s a reason we don’t chill filter. I mean Contradiction Rye is 105 proof and Contradiction Bourbon is 92 proof, why aren’t they line-proofed, right? That’s because we thought that rye was proving to be better when at 105 proof. So, we’ve tried to do what’s right for the whiskey itself, and the way we live.