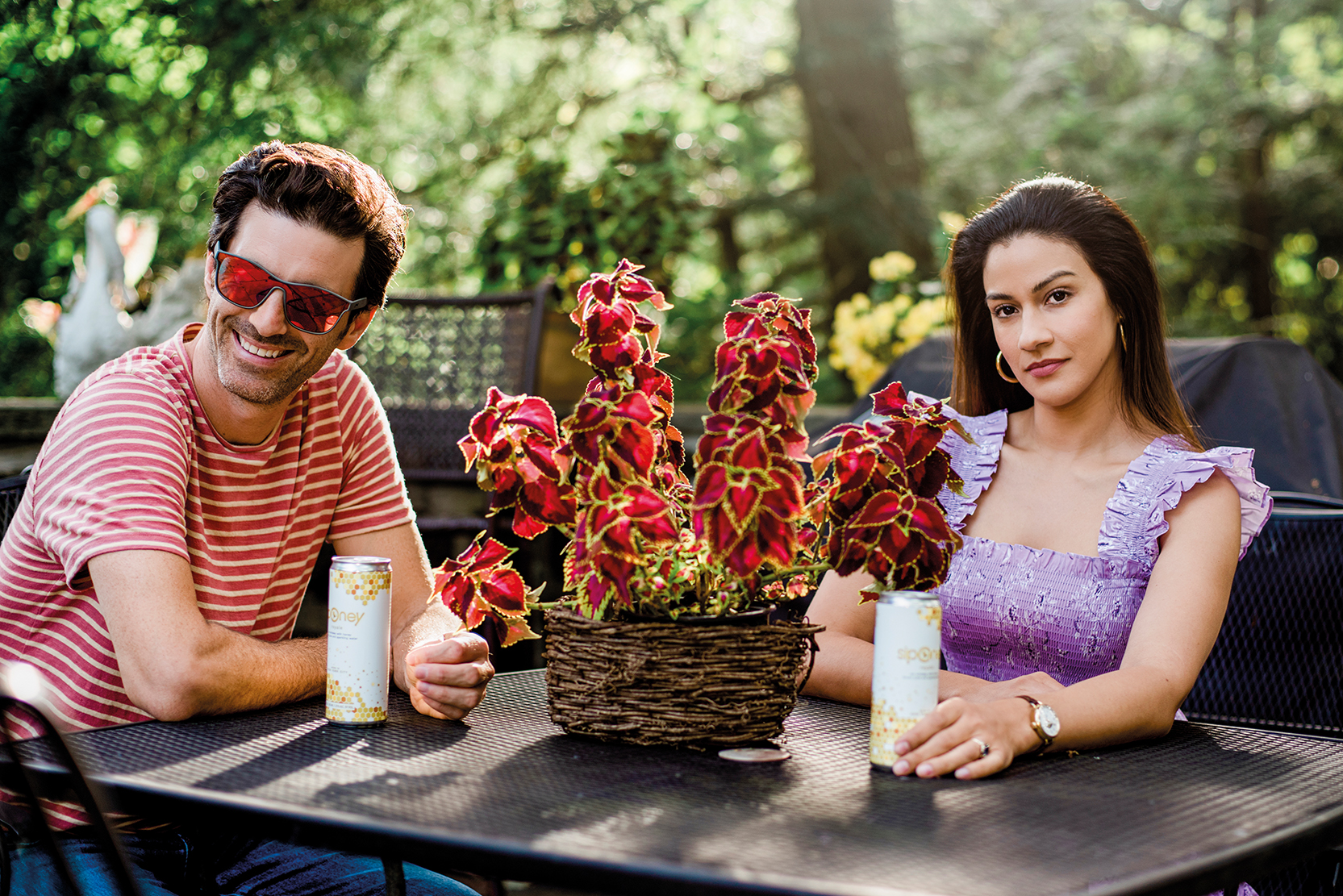 Bravery comes in a plethora of shapes and sizes – and in the case of this whiskey story, in the shape of a can.

For many die-hard whiskey fans, ready-to-drink cocktails (RTDs) can be a point of contention when it comes to quality; however, the rising wave of the category cannot be ignored. In 2020, RTDs rose 62.3 per cent by volume and are expected to have continued in a similar vein this year, providing spirits lovers with a new way to enjoy their beverage of choice.

For Amanda Victoria, Siponey CEO and founder, who has spent the past 16 years in the wine and spirits industry, RTDs provided her with the perfect outlet for her creative spark and love of whiskey. Her love affair with the spirits industry began while working as a hostess in a Michelin-starred restaurant in the West Village at the age of 18. While studying advertising and marketing, Victoria worked her way from hostess, to waitress, to bartender in some of the most awarded bars in Manhattan.

Fast forward a few years, and Victoria’s career was taking flight in enviable roles within some of the largest spirits corporations in the world. She focused her efforts within spirits education, which she says was her “dream job” at the time.

“I eventually got tired of working in the bigger corporate… the Scotch Malt Whisky Society was owned by LVMH at the time,” explains Victoria. “I’d made some connections there [at SMWS] and when I was departing from my role at the time, SMWS brought me into the company. That was my concentration studies in whisky.”

Working at SMWS, Victoria was in the unique position of being able to interact freely with everyone in the industry, something that hadn’t been as simple in previous roles. During this time, her love of whiskey on both sides of the pond grew until it became increasingly obvious to Victoria that she needed to create her own company.

She continues, “Every Friday or so I would create a ‘fake company’… creating concepts. To launch is obviously a bigger deal, but finally, one of them stuck.” Enter Siponey, the canned whiskey cocktail on a mission.

Victoria has dubbed herself a “professional mistake maker”, noting that as an entrepreneur it is important to get comfortable with failing as part of your journey. However, two years into her Siponey journey, failure doesn’t seem to be entering the picture this time.

In the summer of 2019, at six months pregnant, Victoria knew that she needed
to harness the excess creative energy she was feeling. She explains, “You’re literally creating and I had this overwhelming energy that I’d never had before – it was who I am, but on steroids.”

Channelling this energy into something tangible was non-negotiable. Joey Mintz, Victoria’s partner in life and now in business as well, noted that that moment in time was the right one to build something for herself. “I was like, oh this is great, of course I should start an alcohol company while I’m six months pregnant,” she jokes. “But I did and we came together.”

Mintz’s working background couldn’t be further from Victoria’s, with his career built in environmental studies and horticulture. Although initially you may not see it, this was destined to be the perfect meeting of two industries, enabling Siponey to create a product that focuses on what happens both inside and outside the can.

Back in the summer of 2019, the rise of RTDs was undeniable, with one brand in particular storming the market. Victoria felt frustrated by what she was witnessing. She makes clear that there’s no offense intended to those that enjoy the product, and that it paved the way for her to take on this opportunity. However, after spending the best part of a decade educating consumers on how to ‘drink better’, seeing people not being well informed on what they were drinking was too much.

“Everything I had spent so much time educating on… was going out the window really quickly,” she adds. “Out of anger and passion came the idea to put our money where our mouth is and create a product with the best ingredients, on the best environmental mission we could think of.”

The aforementioned environmental mission is centred around a saying that we hear all too often, “Let’s save the bees”. Victoria decided to ask the question: how? Taking inspiration from her background in education, she decided the best way forward would be to provide honey bee apiary educators in the US and around the world with a portion of the company’s profits.

She explains, “Specifically, we have all of this beautiful merchandise and 100 per cent of the proceeds go back to our environmental partners. Then with our cans we give up to five per cent back to the same partners, and we’re also a member of 1% for the Planet.”

To have this dedication to a cause so early on in the business is impressive, but for Victoria and Mintz it was never in question. The honey bee has been a part of Victoria’s story in the drinks industry for many years, beginning in her cocktail-making days.

“I was subbing so many of my recipes with honey because I was getting a rash in my early 20s from white sugar,” she shares. “I couldn’t stand the reaction that processed sugar was creating, but I loved cocktails… so would sub all my recipes with honey. I would always feel better the next day and they felt more balanced.”

As honey has always been a part of her repertoire, when it came to creating Siponey’s 7.25% ABV RTD, Victoria was inspired by the Gold Rush cocktail. Within the can you will find four simple ingredients: rye whiskey, wildflower honey, fresh lemon juice, and sparkling water.

For the co-founders, it was important to delve into their New York roots when creating this product, therefore finding a New York State rye made from locally sourced grains was pivotal.

“In a perfect world I would be laying my own grains and making my own whiskey,” explains Victoria. “Eventually we are moving in that direction, but for now we spent a full calendar year… looking for the best rye whiskey. We were going to go with the source of the whiskey and build the whole manufacturing around that to keep it very localized; wherever we got the whiskey from, that was where we were going to go.”

The rye whiskey that launched the proverbial ship was created by Black Dirt Distillery – it provides the Siponey team with a four- to seven-year-old rye whiskey. Victoria excitedly delves into more detail, “This is a very nuanced, very specific mash bill that I was obsessive about… to the point where heads were turning… it has a beautiful spiciness to it.”

It’s this spiciness that ensured Victoria knew they were on the right track with Siponey’s recipe. Although inspired by the Gold Rush, she felt that the combination of Bourbon and honey would be a little too cloying for the American palate at a commercial level. Due to the focus on keeping artificial flavors out of the can, the palate relies heavily on the whiskey – its backbone, if you will.

Of course, the use of rye hasn’t been without challenges for the start-up, “Understanding that the reputation of rye in the US, to the mass consumer, is very mixed is important.” Victoria called on her background to aid her in this situation, taking time to re-educate the consumer on the beauty of rye.

“I was able to get this sneaky little tasting note, which is the cotton candy that rye can produce if you agitate it in just the right way,” she explains. “It has this beautiful over-ripened grape… but it’s all natural… so to have achieved that for the wide-scale consumer was not an easy feat.”

With the brand’s focus on ensuring it uses the best possible ingredients, while working toward a better future for the planet, the coming years look very positive. “What we do inside the can is equally as important as what we’re doing outside,” adds Victoria. “Hopefully the two things together will give us the synergy to not leave the planet in a detrimental state.” That’s something we can all raise a glass to.

What’s in the can?