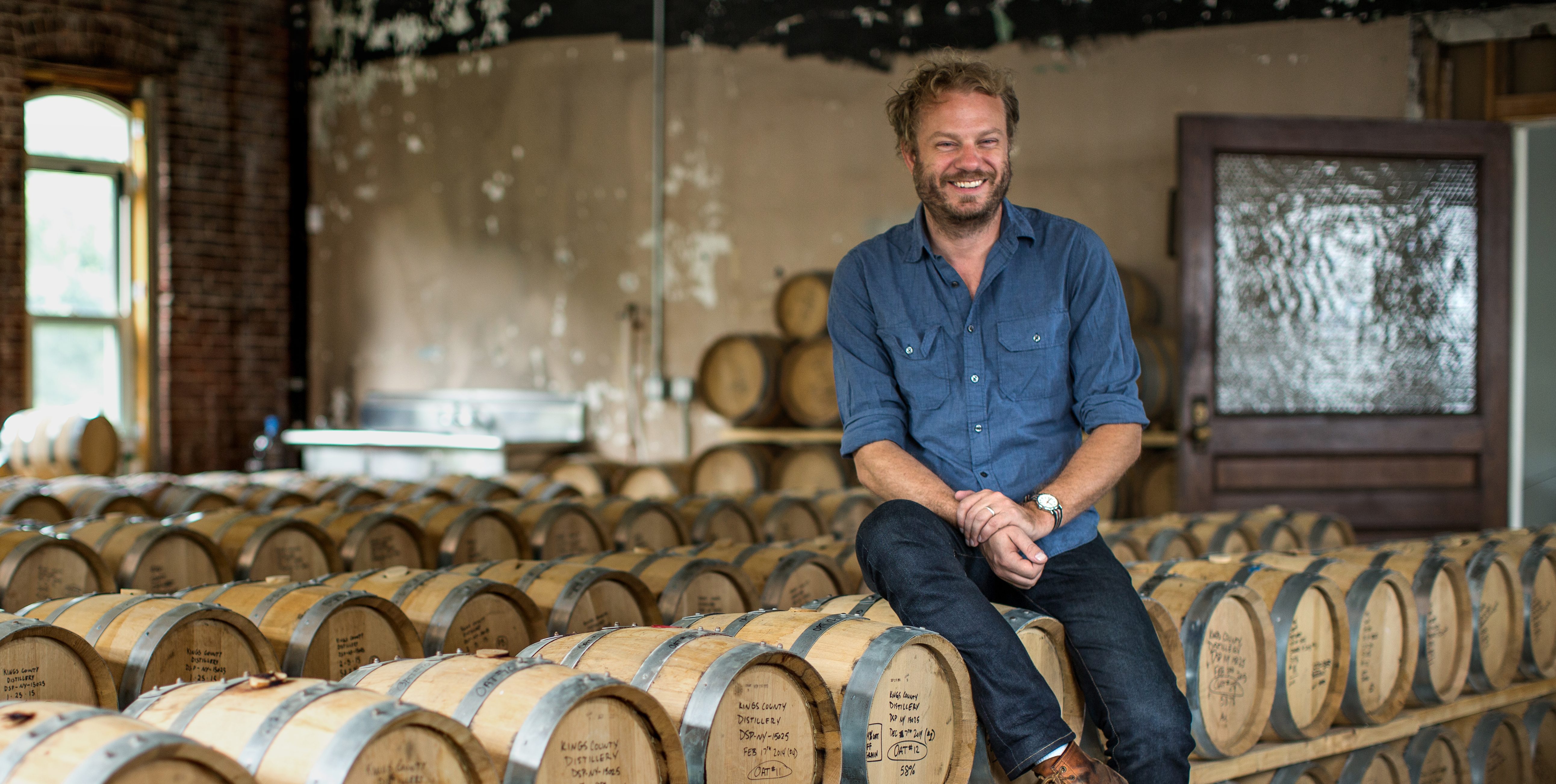 February is here, and what better way to kick off the month than with a new series: Dining with the Distiller. You may be familiar with the whiskey, but what about the masterminds behind your favourite drams?

Although physically dining with the distiller isn’t always a reality in this day and age, this gets you half way there! Each week a new distiller will share their ultimate appetizer, entrée, and dessert, complimented by a selection of whiskeys and the stories that accompany them.

First up we’re dining with Colin Spoelman, Brooklyn-based Kings County Distillery’s co-founder and distiller. Growing up in rural Kentucky, Spoelman was distilling moonshine long before he opened the craft distillery in 2010, with fellow co-founder David Haskell, and this combination of creativity and tradition has ensured their success during the past 12 years.

So over to our host…

This being NYC, we’ll be traveling a bit through the course of our evening. Since this is a hypothetical meal, I’ll take the liberty of dining out, since I can’t really cook and the opportunity of New York’s restaurant scene is too much to pass up.

We’ll start at Cardiff Giant, a Brooklyn bar named after an infamous hoax of a petrified man found upstate in 1869. The bar is particular in that it only serves NY State beer, wine, cider, and spirits. I think it’s important here to set the context for what we’ll be tasting and drinking through the evening.

When people think of American whiskey, they think of Kentucky and Tennessee, but in 1840, New York was producing five times what Kentucky and Tennessee made combined. The long tradition of making rye whiskey in NY dried up after the American civil war, and died out completely with Prohibition. Only recently, through cultural changes that favor farm-to-table foods, sustainable and transparent production, and legal changes allowing for smaller distillers to use NY-grown grain for whiskey, has whiskey come back to New York.

We’ll start here with Kings County’s Moonshine, or corn whiskey. It’s made from 80 per cent NY organic corn and 20 per cent malted barley and is pot distilled in true alembic pot stills (many pot stills in the US have rectification plates and are more properly called hybrid stills). Unaged whiskey, moonshine, or common whiskey, as it was once known, was a precursor to the more refined aged whiskeys. At 12 years old, Kings County is just reaching its adolescence as a distillery, but our unaged whiskey speaks to our ambitions. A good way to measure one distiller against another is to try their unaged distillate. Everything comes from this starting point, and just as grappa, eau-de-vie, silver tequila, and white rum are important unaged forms of other spirits, whiskey’s white spirit is often maligned or overlooked. We’ll start with an apertif of moonshine and then be on our journey.

Our first food stop will be Hawksmoor, a London transplant that just opened in NYC. They are very focused on local ingredients and have an incredible cocktail with Kings County’s single malt whiskey called the Nine Inch Nail, which is a riff on the rusty nail, a traditional Scotch cocktail with salty peach and house-made honeycomb candy. We’ll pair this with charcoal grilled bone marrow oysters. But a word on the whiskey: Kings County’s Single Malt is 60 per cent golden promise and 40 per cent peated concerto malt sourced from the UK, is double pot-distilled and then aged for at least three years in our own used Bourbon cooperage. As American single malts go, ours is pretty traditional compared to many of the new malt whiskeys from the US, but still hard to confuse with a scotch or Irish malt whiskey. Still, there’s no time to linger, since we have other stops.

I grew up in Kentucky, and while some parts of Kentucky are known for barbecue, the part I grew up in was mostly cornbread, ham, green beans; simple staples cooked with few ingredients and without a lot of fuss. It was only after I got a little older and started traveling around the South that I fell in love with barbecue, which to my palate is the best complement to most any type of American whiskey. You have savory smoke, spice, and the tang of vinegar, which pairs perfectly with the sweet complexity of Bourbon. Barbecue is a subject that people have written extensively about, and urban, northern barbecue may be something of a joke. But that said, a lot of culinary minds congregate in New York and when they set their attentions to something like barbecue, even the most die-hard barbecue perfectionist can be hard-pressed to dismiss it – though perhaps a very different experience than the Texas smokehouse on the side of the road.

Barbecue can mean a lot of different types of meat and treatments, but for our part, we are having pulled pork from Blue Smoke, a sort of highbrow take on barbecue, but nonetheless one that is a perfect NYC pairing for our Peated Bourbon Whiskey. Peated Bourbon is legally Bourbon, but uses malt that’s been exposed to peat smoke, a process well-known in Scotland, but one that had never been used for American Bourbon until Kings County made it as a fluke when we ran out of golden promise malt for our straight Bourbon recipe. We had the peated malt sitting for our single malt whiskey and so used that instead. The result is a young whiskey (3YO) with complexity and depth and drinks mostly like a Bourbon but with a hint of Islay Scotch. Here the peat comes from the east coast of Scotland near Aberdeen and may have more barbecue notes than the iodine of an Islay scotch – making it even more appropriate as a pairing choice.

From here, we’ll return to Brooklyn and finish at The Gatehouse, Kings County’s cocktail bar and tasting room. We’ll settle here for dessert. I already conceded I don’t cook, but I will admit I have always been more of a baker. So here, for this hypothetical last course, we’ll have a ‘horse race’ pie. Derby Pie is a trademarked product of a Kentucky restaurant, but it’s essentially a walnut chocolate chip cookie pie and there’s enough speculation on the internet to make a pretty close interpretation and so we’ll have a slice along with a shot of Kings County’s Chocolate Whiskey. This is a dessert whiskey, a little sweet, but also bitter like dark chocolate. It also has a little in common with those Italian digestifs that are so important to so many cocktails. It can work for cocktails that call for such a bittering ingredient but also stands on its own as an after-meal sipper. I like it neat or mixed into a grasshopper, a dessert cocktail made with cream and creme de menthe.

While we’re here, we might as well have one for the road, a final glass of our Bottled-in-Bond Bourbon, which is a nice showcase for what we can do as distillers. I always draw a distinction between our desire to be distillers first and a brand second to that, though many craft products go the other way around, sourcing spirit from big distilleries while their own whiskey ages. We have always made our all of our own product, and now that we have some whiskeys that are six and seven years old, this six-year BiB shows best how we can make whiskey, to the highest standard allowed by Federal law. Bottled-in-Bond is really a mark of transparency, and since we are proud of everything we do, we’re more than happy to highlight it.

That is a pretty full evening, so at this point, we will be glad to see everyone on their way. And since this is NYC, thankfully, no one is driving and everyone gets home safe and sated.

0 comments on “Dining with the Distiller: Colin Spoelman”