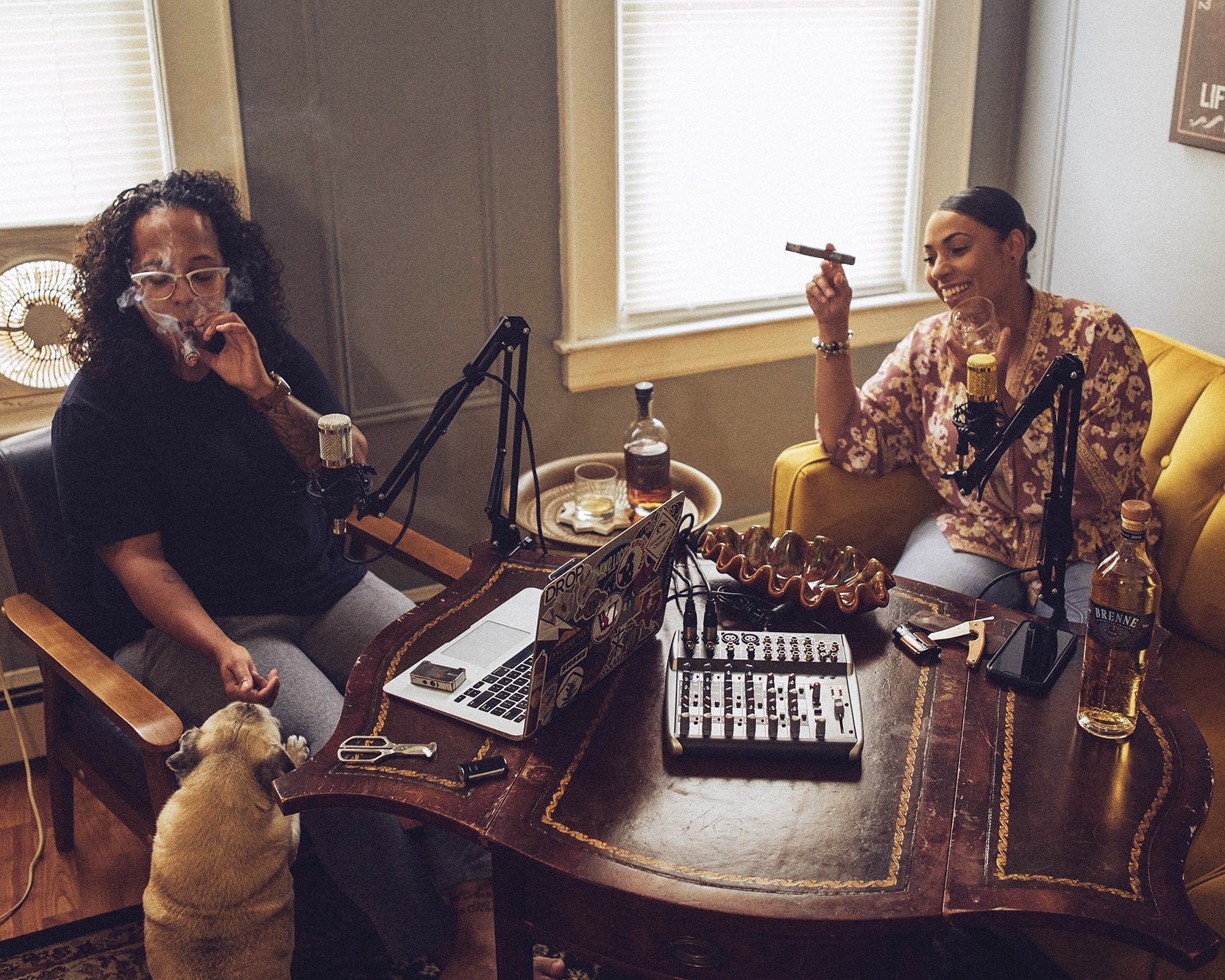 Breaking barriers and bringing authenticity to the cigar world

As women are working hard for equity in the whiskey business and the women who are making the whiskey, behind the brands and on distillery floors, are gaining more recognition than ever before for their work and achievements, the same is being done in the cigar industry and community. I had to the opportunity to light up a good stick, a Drunk Chicken Living The Dream, pour a glass of Widow Jane American Oak Aged Rye Whiskey, and sit down with Erica Arroyo and Amy Tejada from The Lounge Experience (TLE) podcast to gain some insight into their groundbreaking work in the cigar community.

Market research conducted in the late 1980s determined that women comprised one-tenth of one per cent of the total cigar market in the United States. Today, women are the next big market for the cigar industry, and manufacturers and brands are beginning to take notice of this ever-growing population of cigar smokers. Why the change? Similar to whiskey, one factor might be that more women are taking ownership roles and creating spaces that are not only inviting to women, safe and approachable, but also because female consumers can see themselves in community leaders, brand owners, and educators in these industries.

When I asked Arroyo and Tejada how TLE came about, Erica explained that both she and Amy knew the cigar community and industry needed something different. They were looking for deeper conversations surrounding the cigar lifestyle and more in-depth knowledge from brands, but felt there wasn’t space for women at the time. Since they were both avid podcast listeners, they decided they would take on the projects themselves in April 2019.

As Arroyo and Tejada’s was the first female-hosted cigar podcast, I wondered what the reception was like, how they were received by the community. Tejada explained that mostly people were intrigued, curious as to how different a female-led cigar podcast might be. Their original intention was not to break glass ceilings in the cigar community; however, that is exactly what happened. Arroyo and Tejada just naturally took a different approach to the conversations they were having: less interview, more discussion. And of course coming from a female perspective, they quickly set themselves apart not only in the podcasting community but also in the cigar community as well.

Eventually TLE truly became a virtual cigar lounge experience: discussions – sometimes funny, sometimes deep – over a stick and often with a glass of spirit in hand. Quickly, the two began to realize that an important part of the lounge experience was the spirit enjoyed while smoking a cigar. And so they began to have distillers, brand owners, and ambassadors on their show and found many similarities between the two industries – and often the lack of spaces for women.

Arroyo and Tejada are not just cigar enthusiasts; they both came from the industry. The former has been working in the cigar industry for a little over seven years, smoking for over 12. She formerly worked in retail for about a year then did social media marketing for cigar brands. Tejada was introduced to the industry of tobacco/cigars as an opportunity in retail about 10 years ago. In this time period, she says she was able to grow within the industry by creating strong relationships with manufacturers, customers, and other businesses as well as being able to travel nationally and internationally involving tobacco.

When discussing advice for women interested in cigars who would like to join the cigar community, we talked about the need for more safe spaces for women. Ultimately, we encourage women to just be themselves and feel free to enjoy the culture however they like. Arroyo feels it is important to become educated, read articles about the making of cigars, learn about who is behind the brands, and listen to podcasts, of course. You might be surprised to know how many women are in the industry and who are leaders in the cigar community. They are not always visible and that is something that the duo continuously work to change by being a safe and inclusive place.

I have listened to many, many episodes of the TLE podcast and I can hear the difference in Arroyo and Tejada’s guests when they speak on the show. Some of the guests I know, some I have heard in other interviews. There is a clear sense of authenticity that is impossible to miss when listening to the show. As hosts, the pair are determined to have conversations that are not just unique but also honest and approachable.

Before I asked them what their favorite lounges were and what they were smoking, I wondered if Arroyo and Tejada thought they would do anything differently if they launched their podcast now, and they both agreed they wouldn’t change a thing: “We wanted authenticity and so do our listeners.” And their numbers seem to prove this: the TLE podcast is one of the highest rated podcasts in the cigar community, setting a standard now of what listeners really want to hear.

Now to the ever-important question of what are you smoking now? When asked, both Arroyo and Tejada stated there are a few brands they are really into smoking right now: Room101, Casdagli, Dunbarton Tobacco & Trust (Steve Saka Cigars), Drew Estate (Liga Privada), United Cigars (Byron), Illusione Cigars, and Padron.

And if you are able to visit a lounge now, I asked for their favorite place to head on down to. “Tough question,” said Arroyo, “but a great one! I cannot pinpoint just one because there are so many I enjoy. However, my favorite lounge is one that welcomes you, makes you feel comfortable, great hospitality, offers a range of small-brand to big-brand cigars, comfortable chairs, solid music, good parking and knowledgeable staff. All around good energy is most important.”

If you haven’t had the chance to already, you can listen to The Lounge Experience podcast anywhere you find your favorite podcasts. You can also find TLE on Instagram @tle_podcast.

0 comments on “The Lounge Experience Podcast”