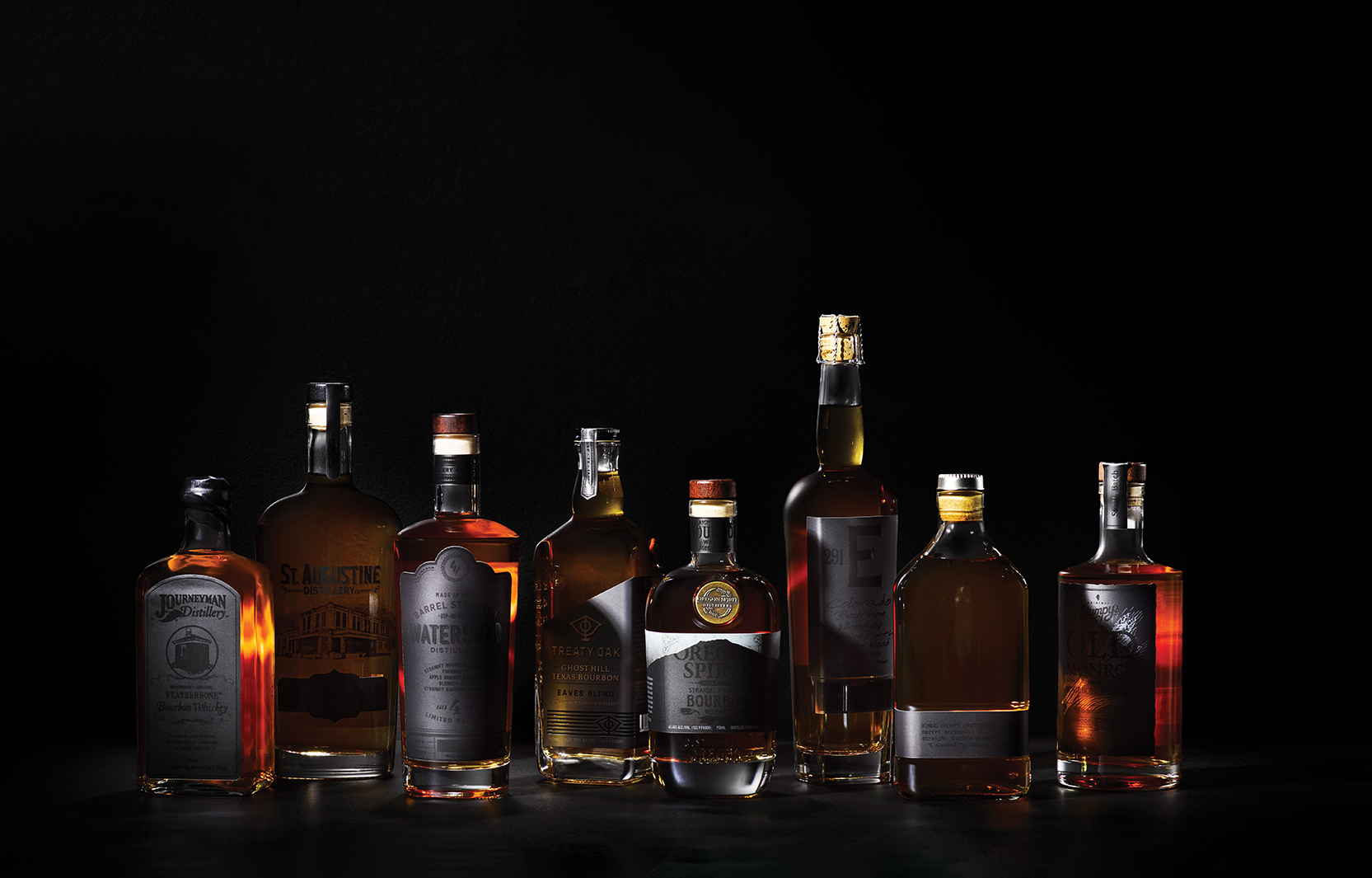 Marianne Eaves has already had a career most would be envious of, from Brown-Forman where she was master taster, to becoming Kentucky’s first female master distiller at Castle & Key. She left Kentucky to explore the world with her partner and his traveling circus, visiting distilleries along the way. Eventually she came up with the idea for Eaves Blind, a blind tasting kit that allows participants to hone their sensory skills and try whiskeys they likely have never sampled before.

The first year of Eaves Blind has just concluded and the products have been revealed, so American Whiskey Magazine caught up with Eaves to learn where the idea for the program came from and how it turned out.

Maggie Kimberl (MK): How did you come up with the idea of creating a blind tasting kit where even the color of the whiskey would be obscured with the black tinted Glencairn glasses?

Marianne Eaves (ME): I think the initial idea to do a tasting kit was just a way to bring people along on the journey with me in the mobile laboratory, and it evolved into the Bourbon and people. I had seen the black Glencairns, I had done blind tastings and blind culinary experiences and knew how impactful that was to my tasting experience. I had this deeper meaning of blind and the blind experience, and I felt like hiding even the color would make people just get in tune with their palate. I wanted to get people thinking about what they were feeling on their palate, not just what they were tasting, and hopefully they would connect with the Bourbon in a deeper way.

MK: What was the overall structure of creating Eaves Blind over the last year, or year and a half?

ME: In the 2021 program, there were two levels. There’s the apprentice level and then the aficionado level. In the apprentice level, you get some information about the Bourbon, the two blends each quarter or season, and you kind of take it at your own pace and have that blind experience. You get the two glasses in the first kit.

The aficionados had a much more in-depth education from all of the nerdy details about the products, except for, of course, who made them and where they were made, but even down to the detailed set pH on the fermenters and that sort of thing. The aficionados would get a link to my live video, they could tune in live if they wanted to, but I also recorded the video and posted it in their members-only area content so they could refer back to it as they tasted through the four Bourbon samples in their kits.

MK: What was the most interesting thing that the participants discovered along the way?

ME: Most of the folks were really surprised about what they were able to feel when they started tuning into the texture of the Bourbon and really started to understand how important that is to the experience. Tasting blind changes your palate. The other component that the aficionados really loved, and especially the bartenders that I brought along on the journey, were the dilution exercises. In every kit they were getting four Bourbons, but then also two water samples sourced from the distilleries along with dilution tables for them to start understanding how water addition changes the experience.

I encouraged them to not think of it as watering down the Bourbon. One of the things that I think is cool about cask-strength Bourbon is that you have the opportunity to create your own experience [with] each drop of water you add. The more you do it, the more you practice, the more dilution, the more sensitive you are to those changes.

MK: Do you encourage people to do blind tastings at home, and if so, what is some of the advice that you give them for how to go about that?

ME: Blind tasting is important. As I was describing to the members, all Bourbon producers make their Bourbon in a specific way because they believe they’re making it the best way that they can, so they think that their Bourbon is the best Bourbon in the world. All the marketing messages are describing why this one is the absolute best one that you’ll ever try. Blocking the marketing messaging and even the packaging and tasting things for what they are and understanding what you truly prefer is really important.

If you don’t have black glassware you can close your eyes. If you can see the color, make sure that they are truly set up in a way where you don’t know what the product is. That’s a good first baby step. I’ve heard lots of people say, “I do blind tastings. I’ll have my significant other go pour me something from the bar and then bring it in there, and then I try and guess what it is.” That’s great, and that’s really fun. It’s definitely a way to get a better understanding of the products
that you love to drink and why you really like them.

About a year before I decided to leave Castle & Key, I was making all these friends across the country and had this personal “Aha!” moment. It was a similar feeling to when I moved on from Brown-Forman. I used to say I was really drinking the Kool-Aid there, because I didn’t know much about the rest of the industry or Bourbon history, because I was only learning Brown-Forman history and Brown-Forman products.

There’s the apprentice level and then the aficionado level

When I left Brown-Forman and I wasn’t making a product yet, I was developing a product, it was even more important to really understand what else is being made out there. It was definitely this kind of pull the curtain back and see how rich the history of Bourbon making was in Kentucky and how many amazing products were out there. I was meeting Kentucky distillers. It was really a big “Aha!” for me, and that feeling was repeated getting outside of Kentucky. I had a similar mentality to most Kentucky producers: we make 95 per cent of the Bourbon made in the US, and there’s a reason for that, and you don’t need to worry about those others outside of Kentucky.

The first few distilleries I started visiting, I remember listening to and asking questions about their processes, and kind of rolling my eyes being like, there’s no way that they could be making good stuff, and then getting to the tasting and just getting my socks knocked off over and over again. It was a humbling experience knowing that while Kentucky makes a great product, and I had about 10 years of experience making product in a very traditional Kentucky way, there are nearly infinite ways that you can make great Bourbon and people are doing it across the US.

I really wanted to highlight that. As my vision for Eaves Blind started to evolve, and I knew people wanted to see Bourbon, for me, I really felt there was an opportunity to start highlighting some of the friends that I made, folks that trust my palate as a Kentuckian, so I thought they might pick this up and be really surprised and excited by what they taste at the end of it.

With Oregon Spirit Distillers, I was actually in Redmon when I was developing the idea for all of this. I sat down with Brandy, the distiller, and Brad, the owner, and said, I think this is what I want to do. Do you like the idea? Am I crazy, can it work? I wanted it to be mutually beneficial. And they were stoked about it. Having my endorsement, with the accolades and accomplishments that I’ve had, to actually put my name with them on a bottle is really saying a lot about how I feel about them.

OI knew I wanted to have St. Augustine as part of it. I was introduced to [St. Augustine co-founder] Phil McDaniel by Kevin. He met Kevin with the circus first, and then Kevin was like, well, you have got to meet Phil McDaniel. I met Phil and Mike Diaz and the whole distillation team, helped them with a couple behind-the-scenes projects, and then asked them if they wanted to be a part of Eaves Blind and they were just stoked about it.

All of them are interesting or different for different reasons. There were a couple of distilleries that I really didn’t know well before just essentially cold-calling them. I’d say, this is what I’m doing, and I’d explain my vision for changing the narrative of Bourbon versus always referring to it as Kentucky produced or other, talking about it in regions, and a lot of folks that I spoke to were like, well, we say that a lot too. That’s exactly our messaging, so we’re totally aligned and we would love to be a part of this.

MK: You’ve got another Eaves Blind opening up in January of 2023. What’s that program going to be like?

ME: The structure is going to change. There will be eight new partners. I’m still kind of on the fence about whether I’ll have a Kentucky one. I’m not going to say yes or no, because I don’t want people to already have that in their mind off the bat. It was important for me on this first one because that was the big story – changing the narrative of Bourbon and starting to look at the segment more broadly. Moving forward, I’m hoping to continue to look for more diverse producers, interesting recipes, and to keep blowing my own mind with what I can find.

My hope for 2023, which might be a little further out in the future, is to add a hobbyist part of Eaves Blind for people who really love Bourbon and want to have that extensive experience with the curated samples and some of the educational experience, but not quite to the same level as this first go-round. I found that a lot of people didn’t get quite as into the GC analysis that I provided, or the water analysis or the soil analysis and the grain, even down to the starch content that I thought that they might.

I also want to provide the opportunity for the in-depth folks to get even more out of it by creating some kind of certification that says, I completed the Eaves Blind program.

MK: Is there anything else that you want people to know about this program?

ME: After the culmination of a year-long experience with these folks, I didn’t have anybody that was like, aw man, really? None of this was from Kentucky. Instead, their reaction was that all these samples were fantastic, and I’m so excited that I got to have this experience. The positivity around the growth of Bourbon around the US is really exciting, and I hope that this program starts to make ties and develop the expectations of what you can find with these different Bourbon regions of the nine climate regions, essentially tying Bourbon to production areas. I want to see a shift in the way that we view Bourbon and how it should and shouldn’t be made, where it can and can’t be made, and who should or shouldn’t be making it. That was a big thing that I have faced in my career, and I want to see a shift in those expectations and barriers while I continue to highlight fantastic products and make really cool blends.